One young woman learns the true nature of power—both her own and others’—in the riveting conclusion to The Waking Land Trilogy.

Sophy Dunbarron—the illegitimate daughter of a king who never was—has always felt like an impostor. Separated from her birth mother, raised by parents mourning the loss of their true daughter, and unacknowledged by her father, Sophy desires only a place and a family to call her own. But fate has other ideas. Caught up in Elanna Valtai’s revolution, Sophy has become the reigning monarch of a once-divided country—a role she has been groomed her whole life to fill.

But as she quickly discovers, wearing a crown is quite a different thing from keeping a crown. With an influx of magic-bearing refugees pouring across the border, resources already thinned by war are stretched to the breaking point. Half the nobility in her court want her deposed, and the other half question her every decision. And every third person seems to be spontaneously manifesting magical powers.

When Elanna is captured and taken to Paladis, Sophy’s last ally seems to have vanished. Now it is up to her alone to navigate a political maze that becomes more complex and thorny by the day. And worse, Sophy is hiding a huge secret—one that could destroy her tenuous hold on the crown forever.

“Sophy is truly a feminist hero: she embraces equality and justice for all—a theme running throughout the novel—while challenging societal norms.”—Booklist

Don’t miss any of Callie Bates’s magical Waking Land trilogy:
THE WAKING LAND • THE MEMORY OF FIRE • THE SOUL OF POWER

An excerpt from The Soul of Power

Ruadan is gone now, executed on the steps of the Tower in Laon, and all I am left with, in the cold light of dawn, is memories. And a creeping doubt about whether I can possibly become the queen he raised me to be.

There’s a soft noise outside my tent. The mountain women who form my queen’s guard shift on the other side of the flap but don’t seem alarmed, so I guess who it must be.

I throw on my riding habit and step out just as Elanna goes by, a slight figure bundled in an overlarge greatcoat, curls of chestnut hair escaping over its worn collar. As usual, she seems oblivious to my presence. I follow her out into the gray-­green dawn. Light softens the rough tents that make up our run-­down camp above the river Ard, near a town called Tavistock. Across the wide, rocky water, mingling with the fog, smoke drifts from the Tinani camp where King Alfred’s troops are waking to begin their latest offensive. They should have no idea that the Butcher of Novarre is here, along with Elanna and myself—­or at least, I hope they don’t. The Butcher keeps claiming our ranks are littered with spies loyal to the Ereni nobles who fled the kingdom after our rebellion, and who now have the ears of King Alfred of Tinan. I’ve heard no rumors that they wish to reinstate Loyce Eyrlai, so maybe they’re simply working against us out of spite. Given the narrow-­minded thinking of some of my ministers, I wouldn’t be surprised.

The guards on the edge of camp acknowledge El, but—­as usual—­no one seems to take much notice of me. Despite my greater height and brilliant red coat, the people only have eyes for their Caveadear. I might as well be invisible.

We leave the guards behind, though. El doesn’t want anyone to witness her weakness.

At the top of the bluff, overlooking the river, she pauses, and I step up beside her. Softly, I say, “Can I help?”

She casts me a tight, skeptical look. She’s been angry with me ever since I encouraged Jahan to go to Ida and argue our case before the emperor of Paladis, but now she simply seems condescending. “No, Sophy. There’s nothing you can do.”

I swallow down a pulse of frustration. As if she needs to remind me, again, that she possesses sorcery and I don’t. That she is the real leader of Eren and Caeris, the one they truly respect, and I am not. That she is Ruadan’s real daughter, and I am merely the one he replaced her with. As soon as she returned to Caeris, our rebellion and our lives became all about her. She is the Caveadear, the steward of the land, the future of Eren and Caeris. She’s the hope of the kingdom, the symbol of magic reemerging throughout the world.

I am the backup. A would-­be Aline to her earth-­shaking Wildegarde. The second choice—­the girl who took her father’s throne when her dead half brother could not, and whose father has never once acknowledged her existence. Who took the throne, in some ways, because she knew her mother would expect it, encourage it, if she still lived.

I’m not proud of how I feel. I remind myself that I love El like a sister. But like a sister, I wish she would learn how to share. And take me seriously.

She’s already descending the steep trail down to the river— ­a spot she picked out yesterday, when the Butcher insisted a display of her magic would put the terror of the gods into the Tinani and destroy their current offensive.

There’s a scrape behind me. Rhia Knoll hops up through the fog, alert despite the tiredness pinching her eyes. I can feel my own exhaustion mirroring hers. As usual, a frown puckers her black eyebrows, belying her delicate features. She tugs the collar of her dark-­blue coat up to her ears. The wind is sweeping down from the north, bringing the coldness of the still-­snowcapped mountains in the Tail Ridge, though we’re in the north of Eren, several days’ travel from the peaks.

Rhia peers toward the foggy river. “Is she down there?”

I gesture with my chin. El has reached a rocky shelf above the water. She’s just visible through the fog, her old greatcoat rendering her shapeless.

Even though she frustrates me, I’m worried about her. Rhia and I might be tired, but Elanna’s exhaustion seems so deep it runs into the marrow of her bones—­and into the land itself. The Butcher wanted her to perform this feat of magic at high noon, for the world to see, as if she could merely snap her fingers and burst the dam upstream that will flood the Ard. And perhaps, in the days after she woke the land, she could. Now, though, her magic is tired and so is she. I’m afraid she won’t be able to swamp the Tinani camp, and if we have to fight this battle with guns and men and horses, we’re going to lose. Tinan’s being supplied by the empire of Paladis; they have more manpower and more guns. And it’s not been our forces that have stopped the Tinani crossing the river, despite the Butcher’s attempts to impress his superior generalship upon everyone. Elanna’s the one who has stopped them, time and again.

She needs help. A respite. Something. Yet I’m too afraid to suggest she rest. We all are.

“Are you feeling better?” Rhia asks me.

I inadvertently touch my fingertips to my stomach, then stuff my hands into the pockets of my coat. “I don’t know what you mean.”

She eyes me. “Don’t be cagey with me, Dunbarron. You looked green all last month. Father thought someone was poisoning you.”

“Oh, that.” I attempt nonchalance. “Something I picked up in Laon—­stomach sickness. Everyone had it.”

Rhia raises an eyebrow but shrugs. I slowly release my breath. Rhia remained on the border the last time I went to the capital, so how would she know I’m lying? Besides, for all I know, people have been ill; it’s that time of year.

All the same, the temptation to tell her the truth presses against the back of my throat. We’re alone on the bluff—­or as alone as we’re going to get—­and the weight of this secret is pulling me down. I feel the need to confess like a hand between my shoulder blades. But I know what Rhia Knoll will say. She’ll tell me I’m being a fool in more ways than one. There’s only one solution for this problem, and Rhia won’t have any trouble telling me what it is.

Am I being a fool?

Of course I am. I know it, but I have no other choice. At least, not one that will let me sleep at night. Ruadan used to say that we are defined by the decisions we make, and that the larger the choice, the more we must face it head-­on, clear-­eyed. I made this choice; I can’t pretend, even to myself, that it was an accident.

But sometimes I wish Ruadan had said something else. That we are more than the sum of our decisions.

I fold my arms, unable to confess, and neither of us says much. The fog’s beginning to burn away as Elanna sits motionless on the shelf below us, giving no indication she’s aware of our presence. The cold seeps into my bones.

I turn. A runner is coming up the hillside from our camp. “You have a visitor,” he pants.

I look past him, toward the rough, fraying tents the Butcher insisted on using, trying to disguise the fact that not only is he here, but El, Rhia, and I are, too. Our intelligence intercepted the Tinani plan to cross here, north of Tavistock, and now we can only hope that information was accurate. I wonder if the two new arrivals who have appeared outside the command tent—­two men, from the looks of it, on black horses, though I can’t make out their faces from here—­have anything to do with that. The Butcher’s come out to greet them; I recognize his bandy-­legged silhouette.

“There’ll be hot coffee down there,” Rhia says. She’s been obsessed with the stuff since she first had it in Laon a few months ago. Now, true to form, she charges off toward camp. The messenger hesitates between her and me.

I glance down the slope, toward El. She’s still unmoving. To all appearances, she’s unaware that we’re even up here.

With a sigh, I follow the messenger and Rhia toward the command tent.

Callie Bates is the author of The Waking Land and The Memory of Fire. She is also a harpist, certified harp therapist, sometimes artist, and nature nerd. When she’s not creating, she’s hitting the trails or streets and exploring new places. She lives in the Upper Midwest. 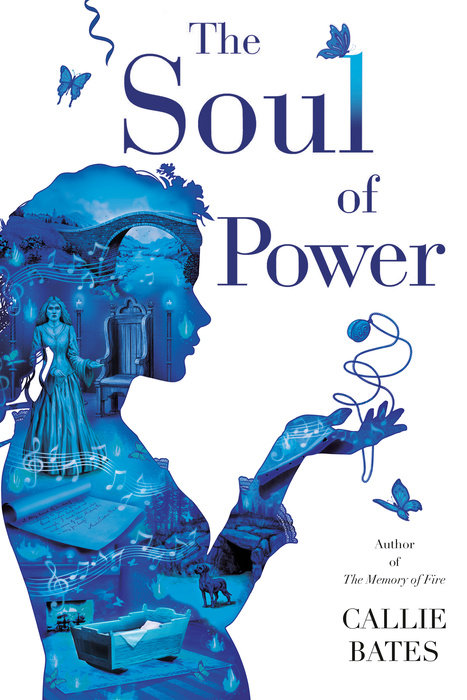