In the tradition of Wild and H Is for Hawk, an Outside magazine writer tells her story—of fathers and daughters, grief and renewal, adventure and obsession, and the power of running to change your life.

I’m running to forget, and to remember.

For more than a decade, Katie Arnold chased adventure around the world, reporting on extreme athletes who performed outlandish feats—walking high lines a thousand feet off the ground without a harness, or running one hundred miles through the night. She wrote her stories by living them, until eventually life on the thin edge of risk began to seem normal. After she married, Katie and her husband vowed to raise their daughters to be adventurous, too, in the mountains and canyons of New Mexico. But when her father died of cancer, she was forced to confront her own mortality.

His death was cataclysmic, unleashing a perfect storm of grief and anxiety. She and her father, an enigmatic photographer for National Geographic, had always been kindred spirits. He introduced her to the outdoors and took her camping and on bicycle trips and down rivers, and taught her to find solace and courage in the natural world. And it was he who encouraged her to run her first race when she was seven years old.

Now nearly paralyzed by fear and terrified she was dying, too, she turned to the thing that had always made her feel most alive: running. Over the course of three tumultuous years, she ran alone through the wilderness, logging longer and longer distances, first a 50-kilometer ultramarathon, then 50 miles, then 100 kilometers. She ran to heal her grief, to outpace her worry that she wouldn’t live to raise her own daughters. She ran to find strength in her weakness. She ran to remember and to forget. She ran to live.

Ultrarunning tests the limits of human endurance over seemingly inhuman distances, and as she clocked miles across mesas and mountains, Katie learned to tolerate pain and discomfort, and face her fears of uncertainty, vulnerability, and even death itself. As she ran, she found herself peeling back the layers of her relationship with her father, discovering that much of what she thought she knew about him, and her own past, was wrong.

Running Home is a memoir about the stories we tell ourselves to make sense of our world—the stories that hold us back, and the ones that set us free. Mesmerizing, transcendent, and deeply exhilarating, it is a book for anyone who has been knocked over by life, or feels the pull of something bigger and wilder within themselves.

“A beautiful work of searching remembrance and searing honesty . . . Katie Arnold is as gifted on the page as she is on the trail. Running Home will soon join such classics as Born to Run and Ultramarathon Man as quintessential reading of the genre.”—Hampton Sides, author of On Desperate Ground and Ghost Soldiers

An excerpt from Running Home

The journey has taken all day. We got up before dawn and we’re still not there. The road before us winds and swerves, up hills and down. It is very narrow, and you can’t see around the curves, so you have to stay to the edge and hope that no one’s coming in fast from the other direction. My older sister, Meg, is driving, like she always did. My three-month-old daughter, Maisy, is in the back, asleep in her car seat.

We pass a small sign for Huntly. There’s nothing here but a low white house where the rural post office used to be. It shut down years ago, and now Huntly is just a name on the map. A mile later, we turn left onto a smaller road. Meg slows down as the asphalt gives way to gravel, as Dad taught us to do out of respect for the neighbors. The lane tightens as it passes a row of mailboxes and a neglected stucco chapel that was once a slave church. To our right is a house abandoned when we were children, its rusting swing set still lurching in the weeds. On the left is the overgrown apple orchard where a horse named Mack used to graze, so skinny we could count his ribs.

My heart skips the way it used to when I was a girl and we’d come back after a long absence. What was waiting for us? What had changed while we were away? We were gone far more than we were here. Always I had so many questions.

Now, at last, I see it: the wooden sign, huntly stage, hand-carved in large black letters, hanging from its post. We ease in and creep between two long rock walls overhung by persimmon trees, giving way to grass on both sides. The field to our right slopes up a long hill that hides the house, until it doesn’t, and there it is, rising right out of the grass, all the lights on, calling us back.

I’ve been coming to Huntly Stage since 1978, after my parents divorced and my father bought the property with his girlfriend, Lesley. I was six that year. Through much of our childhood living in New Jersey with our mother and stepfather, Meg and I visited the farm four times a year; this dwindled to once or twice a year after we went to college, and considerably less when we got jobs and, later still, had children of our own. A quick computation yields a disappointing sum—fifty-two weeks, a year of my life at most.

Because of the infrequency of our visits, Huntly Stage has never felt entirely like home, yet it’s as familiar to me as any place I’ve ever known. I can close my eyes and summon it in my mind: a two-story wooden house overlooking twenty-seven acres of fields and streams and forest. After a summer rain, no greener place exists than this corner of Rappahannock County, in northern Virginia, at the foot of the Blue Ridge Mountains. Dad likes to joke that he can watch the grass grow, but I’ve seen the way he studies his fields and tends to them like children, and I know he’s not kidding.

As with so many things we come to know well over a long period of time, at some point I began to take Huntly’s constancy for granted, or perhaps I always had. I thought it would never really change, just as I thought my father would never change.

Three weeks ago, Dad was diagnosed with stage IV kidney cancer. Shortly after getting the news, I flew east with Maisy from Santa Fe, where I’ve lived for fifteen years. My husband, Steve, stayed home with our two-year-old daughter, Pippa. Meg caught a flight from her home in California, and together we rented a car and drove an hour and a half from Dulles airport to the farm for a long weekend to help however we can. On the plane, I worried that Dad would have cancer written all over his body, but when we pull up the driveway, he’s ambling down the walk to greet us.

“Hello!” he bellows. He looks okay, a little wan but still sturdy, himself.

“Dad,” I say, hugging him hard and handing him the baby. He puts his arms around her, and I put my arm around him and together we walk slowly inside. Through his sweatshirt I can feel his shoulder blades moving up and down with his breath.

The house is comfortably cluttered and largely unchanged from my childhood. Books line the shelves in the living room, paintings and photographs hang on the walls. In the kitchen, the refrigerator is plastered with cartoons; a plastic Queen Elizabeth figurine sits on the windowsill, gracing the room with her regal, solar-powered wave when the sun shines. Lesley, who married my father in 1981, is from England and still goes back every other year.

What’s different is the way the house feels. The air inside is heavier and quieter, sleepier, but there’s too much to do to just droop around the house. Meg and I run errands in our rental car, hauling in supplies from Kmart, ten miles away in Front Royal: a case of chocolate Ensure, because Dad’s losing his appetite, and a new pair of plaid pajamas, because his old ones are threadbare. Both seem like terrible portents of what’s to come.

Katie Arnold is a contributing editor at Outside Magazine, where she worked on staff for twelve years. Her “Raising Rippers” column about bringing up adventurous, outdoor children appears monthly on Outside Online. She has written for The New York Times, Travel + Leisure, Sunset, Runner’s World, ESPN: The Magazine, Elle, and many others, and her narrative nonfiction has been recognized by Best American Sportswriting. Arnold is the Leadville Trail 100 Run women’s champion. She lives in Santa Fe, New Mexico, with her husband and two daughters. 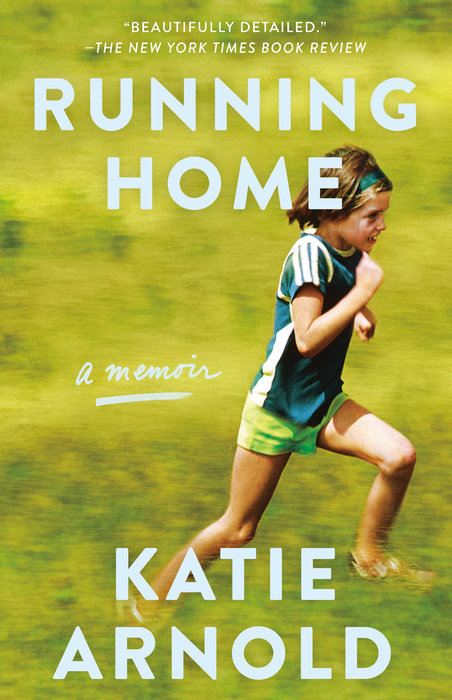