NEW YORK TIMES BESTSELLER • MacKayla Lane and Jericho Barrons return in the epic conclusion to the pulse-pounding Fever series, where a world thrown into chaos grows more treacherous at every turn.

As Mac, Barrons, Ryodan, and Jada struggle to restore control, enemies become allies, right and wrong cease to exist, and the lines between life and death, lust and love, disappear completely. Black holes loom menacingly over Dublin, threatening to destroy the earth, yet the greatest danger is the one MacKayla Lane has unleashed from within: The Sinsar Dubh—a sentient book of unthinkable evil—has possessed her body and will stop at nothing in its insatiable quest for power.

The fate of Man and Fae rests on destroying the book and recovering the long-lost Song of Making, the sole magic that can repair the fragile fabric of the earth. But to achieve these aims, sidhe-seers, the Nine, Seelie, and Unseelie must form unlikely alliances and make heart-wrenching choices. For Barrons and Jada, this means finding the Seelie queen, who alone can wield the mysterious song, negotiating with a lethal Unseelie prince hell-bent on ruling the Fae courts, and figuring out how to destroy the Sinsar Dubh while keeping Mac alive.

This time, there’s no gain without sacrifice, no pursuit without risk, no victory without irrevocable loss. In the battle for Mac’s soul, every decision exacts a tremendous price.

“Bold and brilliantly layered, deeply emotive and all-consuming, the story curves full circle as Mac and Dani try to save the world. . . . Fans of the series . . . will love every moment, every page. As one now expects from the incredibly talented [Karen Marie] Moning, gasp-inducing surprises await.”—USA Today

“Moning is one of the best. . . . [Feversong is] an exciting, pulse-pounding action-filled adventure that at times is dark and terrifying, and other times gloriously happy and romantic. . . . Another fantastic story.”—The Reading Cafe

“The killer awoke before dawn, he put his boots on”

A warehouse in a Dark Zone, Dublin, Ireland

Or try to. Jada crashes into me with a muffled grunt then her hands are on me, everywhere, touching, patting and pulling, undoing my restraints, and the sensation is too much. My body is hypersensitive.

Finally, she frees my hands. I push her away and open my eyes. Too fast, too much. Light thrusts cruel needles into my brain.

I close my eyes swiftly. Scents assault me: the acrid odor of the Sweeper’s minions, concrete and dust, chemicals and sweat.

“I have a headache.” I wait without moving as she hurries about the warehouse, extinguishing the blinding lights the Sweeper arranged for our surgery.

Once I sense diminished brilliance beyond my lids, I open my eyes again. Tolerable.

Sound impacts the delicate structure of my ears as if she’s taken a gong to a shield. Not gone. The Sweeper and his minions were displaced, still nearby. I say, “A simple spell of sifting—­backward, not forward.” No Fae has the power to fold things into the future, and only the king and I possess this small way to manipulate the past. In a matter of minutes the Sweeper will be here again, at our operating tables. But I intend to be gone.

I rise. My body doesn’t move as planned. It shudders, flops, and goes limp. “Stiff from being on the table so long,” I tell Jada, who watches me with narrowed eyes. I contract my abdomen, bend at the waist, stabilize my upper body, rotate my hips and shift my legs as a unit over the side of the gurney and touch my feet to the floor.

Desire. Lust. Greed. And the path I choose to supremacy.

Master of adaptation and evolution, I slide more surely in my skin with each breath, enjoying the complex albeit imperfect elegance of what I possess. I inhale long and slow, swelling first my abdomen then lungs with air. Breathing brings an assault of unfathomable stenches, but I will acclimate.

Everything MacKayla Lane experienced is filed in my meticulous mental vault, but during my incarceration in her body I couldn’t see, I couldn’t hear, I couldn’t smell.

I was—­as she is now—­trapped in a dark silent prison, my only connection to the world an attachment I forged to her central nervous system, through supremacy of will and relentless trial and failure. My existence was a smattering of complex electrical charges, intricate patterns without substance. Although I spied on her life as much as possible, I was able to seize use of her body, hands, and eyes only once, for brief duration. All else was diluted, secondhand perception absorbed from within except on that overcast rainy day I killed the Gray Woman and Mick O’Leary.

The power. The glory. That was the day I knew I would win. Those clumsy, debilitating hours I rode a body for the first time.

I require time to perfect control.

I draw myself up inside, gathering the enormity, the ancientness, the hunger and storm of my existence, and expand into the imperfect biological vessel I’ve claimed, saturating, possessing, every atom. I fill my blood, my bones, my skin.

I turn the full force of my regard upon Jada, blink once, and reveal myself. My eyes, reflected in the stainless steel door of a commercial freezer unit behind her, fill with obsidian until no white remains. Around me the very air cools; I have such presence.

She changes color. Fear impacts the nerves that connect brain to heart, constricting circulation. The blood vanishes from her face, leaving freckles upon snow. Her eyes widen, her pupils dilate and freeze. The scent of her body alters to one I find . . . intriguing.

I experience all of this with my own senses. It’s incomparable. My mere existence embedded within this stolen skin reprograms the anatomy of those around me.

I was made for it.

I would prefer to shred her flesh from bone but several things prevent me. I smile with my new face.

“I would run if I were you,” I tell her softly.

She does, lightning fast. No hesitation, no debilitating deliberation. There one moment, gone the next. Among humans, she is superior.

I covet her speed and dexterity. MacKayla Lane would call it “freeze-­framing.” If I could eat Jada and absorb her talent, I would ignore those things that stay my hand.

There is something else I can eat. Clever MacKayla. Flawed MacKayla. Those that fall pave the way for my ascendance. When one begins at the bottom, ascendance is a given.

I depart the warehouse and enter the gloomy day.

I am. The Sweeper will appear shortly. Not even I have the power to destroy that one.

I’d contemplated pretending to be MacKayla, living among them, infiltrating their circle while pursuing my goals, but deemed the risk of discovery too high. Concealing my brilliance, feigning to be so much less—­impossible. Besides, I am a newly forged sword and will surely benefit from time with hammer and fire.

Time, my enemy, my ally. I have precious little of the commodity to implement my plan. Expediency is directly proportionate to success. When opponents war, the strongest and swiftest wins. I am already the former and intend to be the latter.

Until they hunt me, time is my ally. I possess the weapon to accomplish all my goals. I prize the spear, I loathe it. It might damage me. Its weight beneath my arm both reassures and repulses.

Singing softly beneath my breath—­one of MacKayla’s favorites, “Sh-­boom, sh-­boom, life could be a dream sweetheart”—­I move down an alley, around a corner, proceeding to my first objective. My map of Dublin, once an amalgam of neural currents, now has visual latitude and longitude. While MacKayla wandered aimless, I did not. I was paying attention.

What a sorry experiment she was. I desired so much more.

Unwavering laser-­focus on one’s goals is power. Humans rarely achieve it, infesting their garden with the cultivated parasites of empathy, compassion, mercy, nurturing the grubs of guilt and penance, heaping emotional fertilizer on every acre of arable, marchable, conquerable land until nothing remains but the sky-­high, sickly weeds of their stunted vision. A blind gardener reaps no crop, escapes no predator.

We are desire, lust, greed, and the path we choose to supremacy.

Humans romanticize this truth. Fact: they desire sex. Fact: they desire limiting that vessel from having sex with others. Fact: they create a ritual called marriage and an illusion called love to validate their greed and bid for supremacy over the object of their lust.

WE ARE DESIRE, LUST, GREED, AND THE PATH WE CHOOSE TO SUPREMACY. Take notes. Cretins. Idiots. Call it what it is. Then go forth and fucking conquer.

There are currently two Unseelie princes and one princess living. They will die. I permit none between my throne and me.

My body is human, not prince. Pity. A Fae form would eradicate irksome limitations. But there were no princes available the night I seized the opportunity for escape. I lack wings to soar into the sky, slash Death’s throat with my spear and douse the fire below with his blood.

But my first victim knows MacKayla and will come to her unaware she is me.

I giggle. “Surprise,” I murmur, envisioning the moment.

I spy the first of my children, offspring of the spells I am as I exit the Dark Zone. They are more my seed than they ever were the penitent king’s. Oxymoron that. A true king knows no penitence, bows to nothing and no one.

All of MacKayla’s knowledge of the world around her is mine. Her names for things come easily to me. My existence within her has been far more vivid than anything I experienced from within the covers of the Book that once incarcerated me. Three of my forty-­ninth-­made caste—­those she calls Rhino-­boys—­have a woman in the alley, willing sacrifice to partake of their flesh. They play with her for momentary pleasure, beady eyes, beady minds, puny shadows flickering in puny caves.

Much of the Unseelie King’s knowledge is mine as well. I sprang into existence from the spells he created to birth his Dark Court and know the True Names of the Unseelie, which grants me control over them. Unfortunately there are those Unseelie recently born, such as the Highlander prince, whose names are yet unknown or I would simply summon him and slay him now. Then there is Cruce, currently bound by the king’s chamber magic, impossible to summon. I will eliminate my most challenging enemies first.

I chime in the First Language and three tusked heads swivel. I command them to worship me, to offer the flesh that will grant me Jada’s strength and speed. The woman is abandoned as my children stumble, snuffle, and fall to their knees, heads bowed, shaking with fear and subservience. A simple caste. Not my finest work.

The Fae have long hungered for someone to lead them, make the decisions they fear, the bold ones that bring chaos, death, and war. I’m momentarily incensed by their limits—­these frail toys that are all with which I have to play. These things that aren’t real like me.

Still, I prefer frail toys to nothing. I’ve had an abundance of nothing.

Nothing is Hell. Nothing is where MacKayla is now.

It’s in breaking things that you understand them.

It’s in understanding them that you control them.

The Unseelie tremble before me.

As will the world. 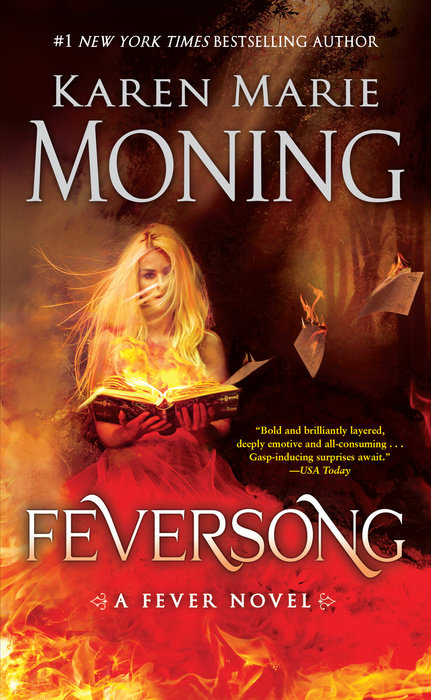