Brought together by a brutal murder, a psychological profiler who’s lost her memory and a teenage boy with a fiercely guarded secret become unwitting, unlikely partners in this race to stop a killer—“Nordic noir at its best” (Booklist, starred review).

Out of the frozen depths of a forest in Ormberg, Sweden, a woman stumbles onto the road. Her arms are covered with scratches, her feet are bare, and she has no memory of who she is. Local police identify her as psychological profiler Hanne Lagerlind-Schön, who, with her partner, had been helping investigate the cold case of a young woman’s murder. Hanne begins to recover but cannot recall anything about where her partner is, or what their investigation had uncovered before her disappearance. Police have only one lead: a young woman in a sequined dress who was spotted nearby the night Hanne was found.

The young woman doesn’t come forward because she doesn’t exist: Jake Birgersson, a local teenager, had been out walking in his mother’s dress and sister’s makeup, his secret shame and thrill. Terrified of discovery, Jake hid and watched Hanne get into a car, leaving behind her diary.

Reading Hanne’s notebook, Jake realizes that it contains the key to a major breakthrough in the case—but turning it in would mean admitting the truth about who he is. When another murder victim is found in the woods, Jake realizes that Hanne herself is in danger, and his only choice is to find and warn her so that together, they can stop the killer before he strikes again.

Praise for After She’s Gone

“[A] stellar crime novel . . . Grebe delivers an unflinching, heart-wrenching message about the plight of refugees in this scorching thriller.”—Publishers Weekly (starred review)

An excerpt from After She's Gone

My name is Jake. I’m named after Jake Gyllenhaal—one of the best actors in the world. It’s supposed to be said in the English way, but most of my classmates say it wrong on purpose. They call me Yake or even worse, Yakuh, exaggerating the Swedish pronunciation. It makes me wish I had another name, but there’s not much I can do about that. I am who I am. And my name is my name. Mom really, really wanted me to be named Jake, and Dad did what Mom wanted, probably because he loved her more than anything else in the world.

Even now that Mom is dead, it’s as if she’s still with us in some way. Sometimes Dad sets a place for her at the table, and when I ask him a question it takes him a really long time to reply, as if he’s trying to figure out what Mom would say. Then comes the answer: “Sure, you can borrow a hundred kronor” or “Okay, you can go to the movies, but be home by seven.”

Dad almost never says no to anything, though he’s gotten a little stricter since TrikåKungen, the old textile factory, was turned back into housing for asylum seekers.

I’d like to think it’s because he’s kind, but Melinda, my big sister, says it’s because he’s too tired to say no. When she says it it’s usually with a meaningful glance at the empty beer cans on the kitchen floor, then she smiles crookedly and blows a perfect smoke ring, which slowly rises toward the ceiling.

I think Melinda’s being ungrateful. I mean, she’s even allowed to smoke at home. Mom never would have allowed that, but instead of being thankful, she says stuff like that. It’s ungrateful, unfair, and, above all, unkind.

When Grandma was still alive, she used to say her son--in--law probably wasn’t the sharpest knife in the drawer, but that at least we lived in the prettiest house in Ormberg, which is something. I don’t think she realized I knew what a sharp knife was, but I did. In any case, it was clearly okay to be a dull knife as long as you had a nice house.

Ormberg’s prettiest house lies five hundred meters from the highway and goes straight into the forest, next to a creek that flows all the way to Vingåker. There are two reasons the house is so nice: first, Dad’s a carpenter, and second, he rarely has any jobs. That’s lucky, because it means he can work on the house almost all the time.

For example, Dad’s built a huge deck around the whole house. It’s so big you can play basketball on it or ride your bike. If you really got a good start, and there wasn’t a fence, you could jump straight into the creek from the short side. Not that anyone would want to do that—the water is ice cold, even in the middle of summer, and the bottom is full of sludge and seaweed and slimy, disgusting worms. Sometimes, in the summer, Melinda and I blow up an old air mattress and float down the stream to the old sawmill. The trees lean over the creek, making a ceiling of green lace, like the tablecloths Grandma used to knit. When you’re on the creek, the only thing you hear is birds, the rubbery squeak of the air mattress, and the rushing sound of the little waterfall that flows into a pond near the old ironworks.

When my grandfather, whom I never met, was young, he worked at the ironworks, but it closed long before Dad was born. The dilapidated building was burned down by skinheads from Katrineholm when Dad was my age—-fourteen—-but the blackened ruins remain. From a distance, they look like fangs sticking up between the bushes.
Dad says that everyone had jobs in Ormberg back then: either on a farm, or in the ironworks, or at Brogrens Mechanical or at TrikåKungen. Now, only the farmers have jobs. All the factories closed, and the jobs moved to China. Brogrens Mechanical stands silent and abandoned, a skeleton of corrugated sheet metal on flat land, and the castle--like brick building of the TrikåKungen textile factory has been converted to refugee housing.

Melinda and I aren’t supposed to go there, even though Dad normally lets us do whatever we want. He doesn’t even seem to think about what Mom would have said either, because the answer comes in a flash if we ask. He says it’s for our safety. What exactly he’s afraid of is unclear, but Melinda always rolls her eyes when he brings it up, which makes him angry, and they start talking about caliphates, burkas, and rapes.

I know what burkas and rapes are, but not caliphates, so I’ve made a note of it to google later—-I usually do that with words I don’t know. I like words, especially hard ones.

That’s another secret I can’t tell anyone. You get beaten up for less in Ormberg, like listening to the wrong music or reading books. And some people—like me, for example—get beaten up more often than others.

I walk out onto the deck, lean against the railing, and stare out over the creek. The storm clouds have thinned out and exposed a sliver of blue sky and an intense orange sun just above the horizon. Frost, which makes the wooden deck look hairy, glitters in the last rays of sunshine, and the creek flows by dark and sluggish.

The creek never freezes—because it’s always moving. You could swim it the whole winter, but of course nobody does.

The deck is littered with branches that blew down during the storm late last night.
I should probably gather them up and throw them onto the compost pile, but I’m hypnotized by the sun, hanging there like an orange just below the edge of the clouds.
“Jake, come inside, for f*ck’s sake,” Dad shouts from inside the living room. “You’ll freeze your ass off out there.”

I let go of the railing, stare at the perfectly shaped wet imprints where my hands just lay, and go back into the house.

“Close the door,” Dad says from the massage chair in front of the huge flat screen.

Dad lowers the volume with the remote and looks at me. A wrinkle appears between his thick eyebrows. He runs a freckled hand over his bald head. Then he absently moves his hand to the massage chair’s control panel, which no longer works.

“What were you doing out there?”

“Looking at the creek.”

“Looking at the creek?”

The wrinkle between Dad’s eyebrows deepens as if I’ve said some hard words he doesn’t know, but then it’s as if he decides he doesn’t care anymore.

“I’m going to Olle’s for a while,” he says, unbuttoning the top button on his jeans to make room for his belly. “Melinda made some grub. It’s in the fridge. Don’t wait up for me.”

“She promised to be home by ten.”

I nod and go out to the kitchen, grab a Coke, go up to my room, and feel butterflies in my stomach.

I’ll get at least two hours to myself.

It’s dark when Dad leaves. The door slams so hard that my windowpanes rattle, and after a moment the car starts and I hear him drive off. I wait a few minutes to make sure he’s not coming back, then I go to Mom and Dad’s bedroom.

The double bed is unmade on Dad’s side. On Mom’s side the blanket is stretched neatly across the bed and the pillows stand perfectly fluffed against the wall. The book she was reading before she died still lies on the nightstand, the one about the girl who gets together with a rich guy named Grey. He’s a sadist and can’t fall in love, but the girl loves him anyway, because girls like when it hurts. At least that’s what Vincent says. I find it hard to believe—I mean, who likes getting whipped? Not me, anyway. I think the girl probably likes Grey’s money, because everybody loves money and most people would do anything to get rich.

Like take a whipping now and then or give a blow job to a disgusting sadist, for example.
I walk over to Mom’s closet and pull the mirror door aside. It sticks a bit and I have to give it a shove before it glides open. Then I run my hands over her clothes: sleek silks, sequined dresses, soft velvet, tight jeans, and wrinkled, unironed cotton.

I close my eyes and swallow.
It’s so beautiful, so perfect. If I were rich, as rich as that Grey, I would buy a walking closet or whatever it’s called. I’d fill it with handbags for every occasion, every season, hang them on special hooks, and my shoes would be lined up on their own shelves with special lighting.

I realize, of course, that’s impossible. Not just because it costs tons of money, but because I’m a guy. It would be totally preposterous to get a closet full of women’s clothes. If I did, it would truly prove I’m a freak. That I’m worse than that weirdo Grey—because it’s okay to hit women and tie them up, but not to dress like one.

At least not in Ormberg.

Camilla Grebe was born in 1968 in Alvsjo, Sweden. She holds a degree from the Stockholm School of Economics and was a cofounder of audiobook publisher Storyside. Together with her sister Åsa Träff she has written five celebrated crime novels. The first two books in that series were nominated for Best Swedish Crime Novel of the Year. Grebe has also co-written the popular Moscow Noir trilogy. 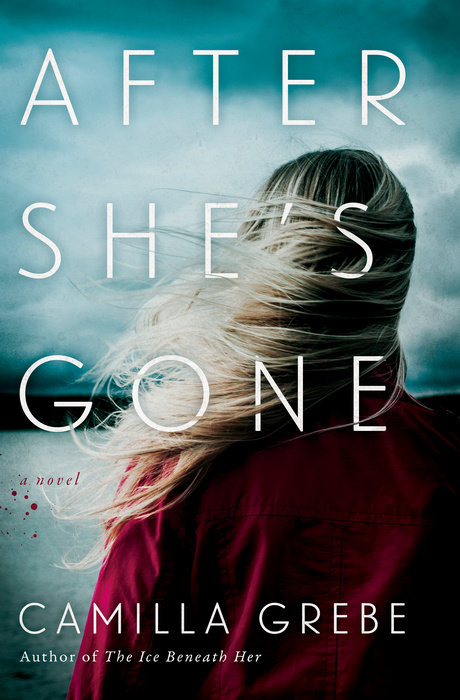