A series of baffling murders among a group of imprisoned agents threatens the outcome of World War II in this chilling mystery from the New York Times bestselling author of Mr. Churchill’s Secretary.

November, 1942. World War II is raging, and former spy Maggie Hope knows too much: what the British government is willing to do to keep its secrets, who is lying, who the double-crossers are. She knows exactly who is sending agents to their deaths. These are the reasons Maggie is isolated on a remote Scottish island, in a prison known as Killoch Castle. When one of her fellow inmates drops dead in the middle of his after-dinner drink—he’s only the first. As victims fall one by one, Maggie will have to call upon all her wits and skills to escape—not just certain death . . . but certain murder. For what’s the most important thing that Maggie Hope knows? She must survive.

Praise for The Prisoner in the Castle

“The colonel sums it up best on page ten: ‘If you take a pretty girl and teach her how to kill, it can cause problems.’ Not just problems—electrifying action and nonstop surprises. I loved this book!”—R. L. Stine, author of the Goosebumps and Fear Street series

“Another literary tour de force . . . From the book’s perfectly calibrated plot to its incisively etched characters, everything is handled with perfect finesse by the author.”—Poisoned Pen Newsletter

“One pleasure of a mystery series is connecting with a character that changes and grows with each novel. . . . Maggie’s intelligence and loyalty to the war effort continue to evolve in [Susan Elia] MacNeal’s series. . . . Solid twists keep the plot of The Prisoner in the Castle churning until the surprise finale.”—Associated Press

“A mystery . . . tailor-made for readers in the post-election, #MeToo era. . . . If you love a tricky puzzle that requires you to keep track of multiple alibis over time, this is your summer read.”—The Washington Post

“MacNeal uses [Agatha] Christie’s And Then There Were None as a framework for a character-driven mystery/thriller that successfully emulates the original.”—Kirkus Reviews

An excerpt from The Prisoner in the Castle

It wasn’t yet four o’clock, but daylight in the highlands of Scotland was only grudgingly cast out before it was reeled back in again. The November sun was setting, touching the black and bulky hills of the island with glimmers of gold. Outside the oriel windows, Maggie could see past brittle old apple trees to a flock of geese that had settled in an empty field. Beyond lay the ocean. “Six hours of daylight’s a meager ration. But then, we’re used to rationing now.”

From across a mahogany desk the size of a small boat, Dr. Charles Jaeger permitted himself a smile. He pressed his palms together, his long fingers tapered and elegant. Maggie had met many, many pale older British men since she’d moved from Boston to London in 1937, but Jaeger was colorless almost to the point of being invisible—­his hair and eyebrows white, his face ashen, his eyes bleached blue. The doctor looked more like an ascetic saint carved from marble than a flesh-­and-­blood man. “You’re always gazing outside, Miss Hope,” he remarked in a low, sonorous voice, sounding amused.

In the late afternoon light, the sea was a glittering spearmint green. It stretched to the horizon, no land visible, an endless ­expanse of rippling water, tipped by white-­capped waves. “Looking for an escape, I suppose.” Maggie was a slim twenty-­seven-­year-­old woman with thick coppery hair pulled back neatly into a low bun. She put down her knitting needles and the navy sock she was working on—­socks for soldiers, each with Morse code V for Victory knit in.

“Watching the play of light on the water has been one of my comforts here—­I wish I could draw or paint it. The ocean’s huge, deep, and powerful, but we only see the surface. The secret is what lies beneath, isn’t it?”

“And what do you think lurks below the surface, Miss Hope?” The doctor was backlit by the setting sun, a dark silhouette against citrine.

Foreboding crept over her, making the hairs on the back of her neck rise. We’re at war. The enemy always might be closer than we think. “U-­boats, most likely. Wolf packs of them.”

“Well then, who knows?” Maggie turned her gaze back to him. “Salmon, before they make their way back up the rivers and streams to spawn? Sunken pirate ships? Monsters, mermaids—­they call them selkies here, don’t they? The Blue Men of the Mich?” Maggie had learned from the castle’s housekeeper that the Blue Men, also called storm kelpies, were a race of sea devils believed to live in the waters of the Hebrides. “The sea’s always a mystery, isn’t it?”

She sat across the desk from him in a red-­leather club chair, noting a shadow box of pinned butterflies hanging on the opposite wall. “And what would your Freud say about the ocean, Doctor?”

Dr. Jaeger was a psychologist who visited Forbidden Island once a month. A fisherman named Broden MacLean brought him on his small boat, along with food, supplies, and fresh laundry. The doctor’s job was to monitor the physical and mental health of the prisoners—­“the trainees,” as they were euphemistically called. He was always immaculate, his Jermyn Street suits well pressed, his crisp white shirts giving the impression he could perform surgery at any moment. Dr. Jaeger met with each prisoner in the castle’s library, a chilly, wood-­paneled space redolent of beeswax polish, cigarette smoke, and dry rot, with glass-­fronted bookcases and dark mahogany panels that stretched up to a plaster-­medallioned ceiling. A reproduction of the English artist Sir Edwin Landseer’s The Sanctuary hung over the fireplace’s mantel—­a painting of a wounded deer who had swum to an island, a momentary place of refuge from the violence of the hunt. In profile, the animal’s large dark eye looked both accusing and sad.

Even though it was a library, the books looked to have been bought for display purposes only. The few tooled leather-­bound tomes that looked read were on hunting and fishing: James Watson Lyall’s Sportsman’s and Tourist’s Guide to the Rivers, Lochs, Moors and Deer Forests of Scotland, Izaak Walton’s The Compleat Angler, and the like. They were flanked by a selection of Sir Walter Scott novels, while H. G. Wells’s The Island of Doctor Moreau kept company next to a set of Agatha Christie mysteries.

The bloodcurdling howl of a passing Manx shearwater startled them both. The black and white birds were everywhere on the island, living on top of the rocky peaks of the eroded volcano, their loud screams wild and eerie. As the bird dove, like a Spitfire attacking a U-­boat, the doctor scribbled something in his notebook, then glanced up. “I’m more of a Jung disciple myself,” he told her, “and he had quite a bit to say regarding the ocean and the unconscious.”

“I’m sure.” Maggie gazed through a sunbeam thick with dust motes to the calendar on the desk—­the date was November 12, 1942. Her last memory of being in London was June 22. One hundred and forty-­three days had passed since she’d been brought, against her will, to Forbidden Island. For more than twenty weeks, nearly five months, she’d been held prisoner in the island’s castle, unable to help the war effort, prohibited from letting her friends and family know she was safe. The inmates were completely sequestered. No phone calls were allowed. No letters could be sent or received. No radio communication was permitted. Beyond the castle, there was nowhere to go on the island—­no town, no village, only uninhabited woods and lochs.

Forbidden Island, really the Isle of Scarra, located just off the western coast of Scotland, was a remote overgrown wilderness of three square miles, with moors, forests, craggy inlets, and shining sands. Golden eagles soared overhead and red deer wandered under the pines. There were no boats, of course—­beyond the one that visited once a month—­but even if there were, the island was surrounded by whirlpools, rendering passage treacherous at best.

Maggie and her fellow prisoners were housed in what had once been a shooting lodge, an improbably ugly structure called Killoch Castle, with long, unconvincing battlements and graceless corner turrets. The “castle” was a lumbering reification of Victorian and Edwardian excess, a florid fantasy of a medieval manse built as a private residence in 1900 for Sir Marcus Killoch, a textile tycoon from Lancashire. Sir Marcus had designed the structure in a castellated Tudor style, using blood-­red sandstone shipped over from Annan at great expense. It had its own electricity supply, as well as modern plumbing and heating.

In its day, the castle had been infamous for luxury and excess. It boasted a Japanese garden, a maze, a bowling green, and a golf course—­all created using topsoil imported from Ayrshire. A glass greenhouse had once housed tropical plants and flowers, as well as hummingbirds, turtles, and alligators, while the hunting hounds slept in a heated kennel. There was even a small stone cottage on the side of the mountain, a hermitage for a resident hermit, who would dispense wisdom to any inquiring guests. When Marcus Killoch died in 1922, he’d left no heirs. And when the war had broken out, the abandoned castle was taken over by the British government.

Maggie hated Killoch Castle. She thought it one of the most loathsome buildings she’d ever seen, a monument to colossal ego, bad taste, and greed. In her opinion, Marcus Killoch was the worst kind of nouveau riche Englishman, who played at being an island laird with his toy castle, rifles, and hunting trophies.

Dr. Jaeger remained silent, pen poised over paper. Maggie understood what he was doing; his prolonged silence was a technique, designed to make her talk. She recognized it from her spy training with the SOE. Still, she knew she could outlast him; he had nothing on the Gestapo interrogator she’d encountered in Paris.

Without compromising his ramrod posture, Dr. Jaeger tilted his head, face blank as a Lewis stone. “This is your fifth session, Miss Hope. And you haven’t revealed anything yet. Anything of real import, that is.”

“I like the peace in the library, Doctor. It’s an excellent place to think.” She picked up her half-­finished sock. “And to knit. Since I can’t be an SOE agent anymore—­or do anything to help the war effort, really—­the least I can do is help keep our soldiers’ feet warm.”

“You’re not alone, Miss Hope. Most agents brought to the island rankle at even the idea of mandated therapy.”

“Well, not me. I know you’re just doing your job. So, let’s make this simple. When you realize I really and truly won’t talk—­at least not about what those in the British Intelligence fear I might let slip—­you’ll release me. And I’ll go back to regular life.” She smiled. “And since I’ll never talk, you might as well let me go now.”

“Ah, Miss Hope.” He raised his eyebrows. “I’m afraid it’s not that easy. And even if it were, I don’t have the authority to release you, or anyone.” 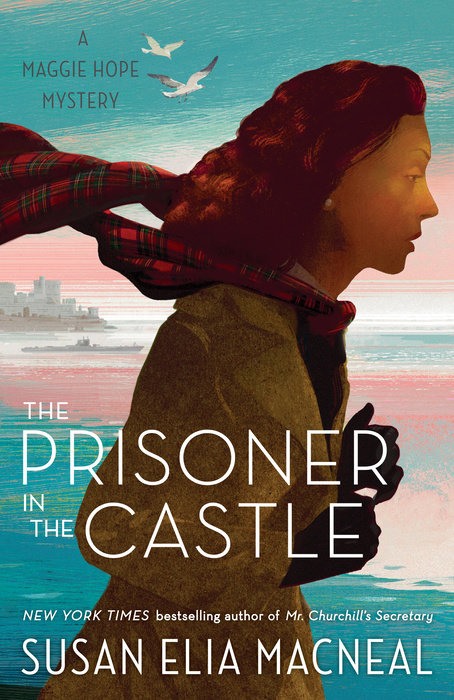