Maggie Hope started out as Winston Churchill’s secretary, but now she’s a secret agent—and the only one who can figure out how the missing violin ties into a series of horrifying murders.

London, December 1943. As the Russian army repels German forces from Stalingrad, Maggie Hope takes a much-needed break from spying to defuse bombs in London. But Maggie herself is an explosion waiting to happen. Traumatized by her past, she finds herself living dangerously—taking huge risks, smoking, drinking, and speeding through the city streets on a motorbike. The last thing she wants is to get entangled in another crime.

But when she’s called upon to look into the theft of a Stradivarius, one of the finest violins ever made, Maggie can’t resist. Meanwhile, there’s a serial killer on the loose in London, targeting conscientious objectors. Little does Maggie know that investigating this dangerous predator will pit her against a new evil—and old enemies. Only Maggie can uncover the connection between the robbery, the murders, and a link to her own past.

An excerpt from The King's Justice

“I thought Justice was supposed to be blind,” murmured Maggie Hope, looking up through the taxi window to the golden statue atop the dome of the Old Bailey. Above the gilded figure, the heavy gray clouds were swollen with threatened rain.

Maggie leaned forward, feeling the pulse tick in her neck, fighting off the beginnings of panic. As the bells of nearby St. Paul’s Cathedral tolled nine times, she gazed at the figure of the slim woman, standing tall against the sky. Lady Justice wore a spiked crown atop her head, her arms stretched wide, the sword of retribution in one hand and the scales of justice in the other. Her uncovered eyes gazed impassively over London.

As the black taxi drove on, Maggie remained transfixed by the figure, turning her head to stare until it dropped out of sight. “Doesn’t Justice need a blindfold? Or is that not done on this side of the pond?” Wrapped in a dark wool coat, her coppery hair pulled back in a tightly coiled bun and topped with a black velvet hat, she looked younger than her twenty-seven years.

Detective Chief Inspector James Durgin reached for her gloved hand; Maggie found his earnest, grave expression charming. There was something sagacious about his eyes, even though he was only seven years older. “I’ve heard it said with this particular statue, Justice’s ‘maidenly form’ is supposed to guarantee her impartiality,” he replied in his thick Glaswegian burr.

“Hmm.” She turned to face him and tried to smile as the cab sped by the courthouse and kept going—the Old Bailey had been bombed in 1941, and until it could be repaired all criminal trials had been moved to the Law Courts.

“You do look handsome, I’ll say that for today,” she said, inhaling his comforting scent of wool, peppermints, and tea. Durgin, whose long, lean frame folded into the cab’s backseat with difficulty, usually favored thick-soled shoes, dark suits, and a long trench coat, but today he sported the dark blue dress uniform of the Metropolitan Police. His thick brown hair was white at the temples, and the diagonals of his widow’s peak emphasized his sharp cheekbones.

“With or without a blindfold,” Durgin assured her, “Justice will prevail today. And then we can put this case behind us, once and for all.” He intertwined his fingers with hers. “And we can move on with our lives.”

But rage at Nicholas Reitter, and sorrow for all the lives he’d destroyed, coursed hot in her veins, raw and profane. Will I ever truly be able to put the Blackout Beast behind me? she wondered.

The taxi skidded on the icy road as it turned onto Fleet Street, and Maggie’s and Durgin’s clasped hands broke apart as they struggled to keep their balance. The vehicle nearly crashed into a newsstand. Just before they swerved, as if in slow motion, Maggie caught the morning’s headline: soviets cut nazi lines west of stalingrad.

“Dangerous driving today,” the driver offered by way of apology as he drove on. “ ‘Black ice,’ they call it—on top of the usual bomb damage.” He was a gray-haired man with a long, sloping nose, a checked wool cap, and a bumpy hand-knit muffler. As they passed a sign reading danger uxb, he snorted. “Bloody unexploded bombs.” He took their measure in the rearview mirror and his watery eyes sparked with recognition. “Wait a minute,” he said, his breath making white clouds in the cold air. “Are you—?”

But the driver’s enthusiasm was undeterred. “You’re DCI Durgin and Margaret ’Ope! You two must be on your way to the sentencing of—what’s ’is name?—the ‘Blackout Beast.’ ”

“Nicholas Reitter,” Durgin corrected. “The murderer’s name is Nicholas Reitter.” Maggie knew Durgin hated the press’s nickname for Reitter, but the “Blackout Beast” moniker had stuck. She and Durgin had tracked Reitter the previous spring, when he’d gone on a savage killing spree. He murdered five young women in the manner of Jack the Ripper before they apprehended him in a shootout that claimed six additional lives from the Metropolitan Police force.

“We don’t have to be there in person, you know,” Durgin said in a low voice to Maggie. “We can go home and listen for the sentence on the wireless. I’ll even make the tea.”

Despite her shallow breathing and prickling skin, Maggie smiled—Durgin did love his tea. “And miss seeing all those pale old men with powdery wigs and long silky gowns pontificate? Perish the thought.”

“I’m worried about you,” he said. “You’re . . . different since you returned from Scotland.”

She folded her hands and pressed them together, fingers laced tightly, so their shaking wouldn’t betray her. “I need to see this through. To the very end. Whatever it may be.”

The Royal Courts of Justice were better known as the Law Courts, a massive Gothic building on Fleet Street. The driver pulled the cab over to the curb, near a pile of dirty, melting snow, and stopped. As he touched one hand to his cap, Durgin searched his pockets for coins and Maggie pulled her hat’s black fishnet veil over her face like a mask.

The driver pocketed the fare. “Wait until I tell the missus I had you and the Detective Chief Inspector with me! She won’t believe it!”

Maggie gritted her teeth as she wrestled with the jammed door handle. “Please give her my best.” Finally, she forced the door open, the sight of the courthouse making her breath stop.

“I just wish you’d shot the Beast dead when you’d had the chance,” the driver continued. “Then we wouldn’t have had to go through this mess of a trial. War’s bad enough—but sequential murderers, too? Killing our own girls?”

Serial killers, Maggie thought. She had fought to change the name, but had been overruled. The term Serienmörder, or serial murderer, was in use by the Berlin police. But Durgin had been firm. “It was our job to bring him in,” Maggie replied as she stepped out, struggling to keep her hands from shaking. “Now it’s the court’s job to mete out justice. Good day, sir.” She closed the door, careful not to slam it.

He’s right, she thought. Anger swirled in Maggie’s chest, stark and combustible, before she managed to force it back down, compressing it, until she could almost convince herself it didn’t exist. Durgin caught up, and together they made their way over the slick, icy pavement to the courthouse, with its pointed arches, detailed finials, and long lancet windows hung with daggerlike icicles. When Maggie skidded on a slippery patch, Durgin reached out to steady her.

Recovering, she moved her lips in the outline of a smile. As they neared the courthouse, she squared her shoulders. Protesters holding signs swarmed the sidewalks. Some red-faced picketers chanted slogans, while others recited the prayer of St. Francis of Assisi.

Even though she’d been born and raised in the United States, Maggie knew the issue of the abolition of capital punishment had been brought before Parliament in 1938—and an experimental five-year suspension of the death penalty had been declared. However, when war broke out the following year, the bill had been postponed. In Great Britain, death was still legal punishment in cases of murder and treason, and a number of German spies and saboteurs had been prosecuted and executed under the Treachery Act, including the Nazi agent Jakob Meier.

For Maggie, the death penalty—in both theory and application—was all too personal. She had, only a year earlier, witnessed the case of a young man wrongly accused of murder and sentenced to death in Virginia. She had been to the execution chamber and had seen the electric chair firsthand. She knew innocent people could, and did, die in the hands of the court system.

But in this case, there was no doubt Reitter was a killer. There was no question of the wrong man being sentenced. Nicholas Reitter was guilty of horrific crimes. He was guilty and now there was only a decision: life imprisonment or execution. And about this inmate, Maggie had no feelings beyond blinding rage, which tasted like iron on her tongue. Jack the Ripper may never have been apprehended, tried, and sentenced, Maggie thought, but Nicholas Reitter will face justice. 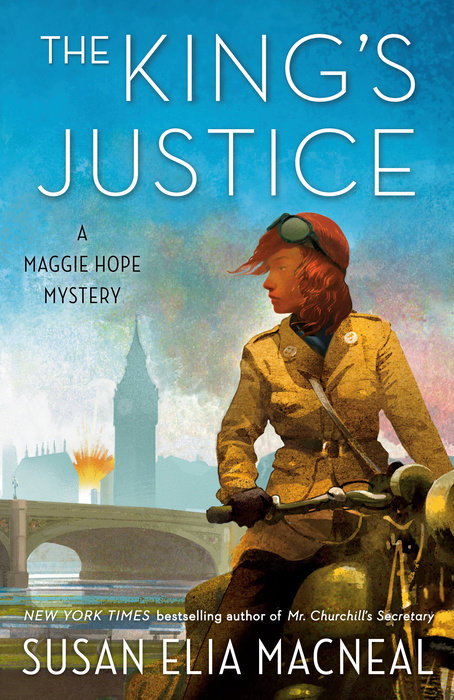