Chicago chef Paul Kahan is legendary for cooking up amazing food at home while everyone--including him--is hanging out in the kitchen, talking, and having a great time. Cooking for Good Times shares Kahan's best secrets for low-stress cooking for friends and family, using his program of twelve basic actions to mix and match (such as "Roast Some Roots, "Make Some Grains," "Braise a Pork Shoulder," and "Make a Simple Dessert"). In every chapter, Kahan gives six to eight customizations for each core recipe for ways to make dishes seem new. Simple recommendations for wine and beer styles to pour remove the fuss over beverage options. With recipes ranging from Roasted Chicken with Smashed Potatoes and Green Sauce to Farro with Roasted Cauliflower and Oranges and Steak with Radicchio and Honey-Roasted Squash, plus more than 125 mouth-watering photographs, Kahan's playbook is guaranteed to make hosting more relaxing, fun, and delicious.

An excerpt from Cooking for Good Times

WHEN I STARTED THINKING ABOUT what I wanted to do for my second book—long before the first book was close to done—I kept coming back to what had been the inspiration for my restaurant avec. There was something about that place that had been a part of my life beyond my work that I wanted to somehow translate. In the beginning, before avec became avec, we just wanted a little wine bar next to Blackbird to make some money off the wine. But the food was so good, it ended up being about the wine and superdelicious, super-straightforward, super-shareable dishes. And that’s really what it’s about at its core—avec = with. Whenever someone hasn’t been in to eat and wants to know what kind of restaurant avec is, I tell them that it’s kind of like the best dinner party everyone wishes they could have—there’s great music, tons of wine, and the food just keeps coming out in waves, all served family style. There’s really no designation between appetizers and entrées—you don’t need to have the charred asparagus salad first and there’s no reason you can’t eat our signature “deluxe” focaccia with Taleggio cheese alongside your main course.

And while some people like to label our food as European or Mediterranean, I’ll be the first to tell you that avec is an American restaurant. Avec chef Perry Hendrix and I are two Midwestern boys making food in the Midwest. All of our ingredients come from the region, or ideally as close to here as possible. But we also like adding ingredients that contribute great flavor, such as za’atar or sumac or harissa. We don’t necessarily do things the way someone’s grandmother did it, and our muhammara might not be the most traditional one there is, but nothing’s off-limits. And nothing is overworked. The food itself is simple; there’s not one dish coming out of the kitchen that takes longer than three or four minutes once the order goes in. Just like when you’re cooking at home, everything is prepped in advance, and many of our staple (and most well-known) dishes—brined and braised pork shoulder, whole roasted fish, marinated roasted beets—are based on the same tried-and-true methods that we’ve been using since we opened, with the addition of maybe three or four different components (vinaigrettes, aiolis, and other schmears, spreads, and crunchy things) that get adjusted with the seasons. It’s completely about getting friends together and sharing a great meal, not tweaky food.

But this book isn’t about avec the restaurant; it’s about avec the idea. And the idea that inspired avec and its communal, convivial vibe started with my wife, Mary. Before I had the honor of calling her my wife, or even my girlfriend, Mary was in a horrible motorcycle accident in Le Mans, France. (Hang in there; there’s a good payoff coming!) The story didn’t start there, though. It started with Mary sitting outside of her office on South Michigan Avenue, eating her lunch. A guy walked up and introduced himself—his name was Jürg Frehner, and he was traveling around the United States. They got to talking, and over the course of the few weeks that he was in Chicago, he and Mary met up, went out for drinks, and she showed him around. (Luckily he had a serious girlfriend and this was truly platonic—or things would have turned out really different for me. . . .)

When it was time for Jürg to leave, he invited Mary to come see him in Europe and bike around France. So fast-forward to Le Mans, where he and Mary were hit head-on by a truck, sustained very serious injuries, and were medevaced to a hospital in Gais, Switzerland—a little cow town in the Swiss Alps near the Austrian border where Jürg had family. Mary convalesced there for about six weeks, healing from a broken arm and hoping to continue her journey. She ended up meeting a woman named Verena, who had just returned to town, was between jobs, and whose partner was in the military as part of his mandatory service. She had nothing to do, and Mary had nothing to do, so the two of them would go out and get into trouble (but not too much trouble), drinking at the bierstube and hanging out with Verena’s friends (who have since become our very close friends and have intermarried with our friends from the States, leading to an unprecedented Chicago-Gais connection). Not long after Mary came back to Chicago, she met me. At the time I was working for Erwin Drechsler at Metropolis Café, and he eventually agreed to send me to Europe for my first-ever trip. So as our starting point, Mary decided she would take me back to Switzerland to visit Verena.

It was 10:30 AM on a Sunday when Verena picked us up at the Zurich airport, but she still had a bottle of Champagne for us to drink while she drove the two and a half hours in a snowstorm back to Gais. Within an hour of getting back to her house—a fourhundred-year-old farmhouse with a beautiful wine cellar in the barn, to hold all the great wine she and her partner loved to bring back from Italy, and a big, wood-burning oven in the kitchen—a parade of people started to pour in. It turns out we were about to majorly benefit from two Swiss traditions. The first tradition was that Sundays were for visiting. People all over the town would wander between the houses— sometimes for miles through forests and multiple feet of snow—just to socialize, share a little spread of food, and drink some wine. The second was that, in order to help visitors beat their jet lag, hosts would arrange for people to come over every couple of hours to visit. This also involved eating and drinking wine.

Over the course of our first afternoon there, about thirty people must have come by and, between arrivals, Verena and her partner would refresh the wine, of which we must have gone through fifteen, twenty, bottles. We were also pulling delicious, simple dishes from the oven, plunking them down on the table right in the pots they’d been cooking in. We sliced off hunks of bread, toasted them until they were this side of charred, rubbed ’em with garlic, and put them out for people to top off with cured meats and all the condiments in tubes that the Swiss can’t get enough of. (Seriously, their mustards and mayo and relishes and this Marmite-type stuff all come in tubes.) That’s where the seed was planted for avec. It’s where the seed was planted for how I cook now whenever I host people at my own home. And it’s ultimately the foundation of this book. 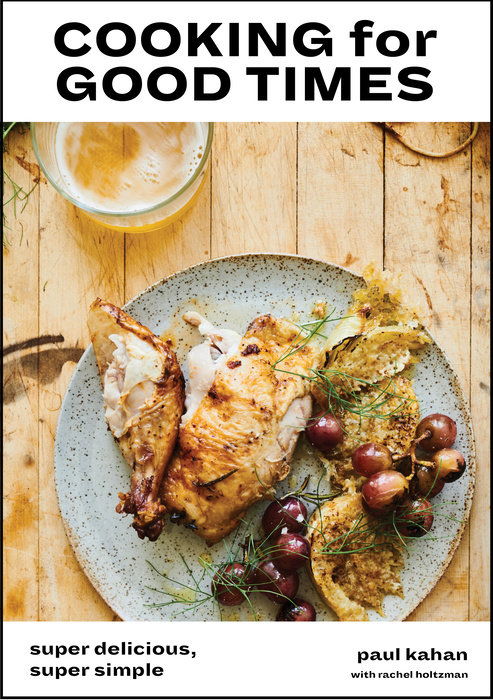