Watch the pounds disappear—with the press of a button! That’s all it takes to blend up a Zero Belly Smoothie, a unique mix of supernutrients that will flatten your gut, boost your metabolism, heal your digestive system, and turn off your fat genes for good.

With fat-burning proteins and a specially selected array of high-powered fruits and vegetables, Zero Belly Smoothies—based on the New York Times bestseller Zero Belly Diet—are the fastest and most delicious ways ever created to sip off the pounds!

Zero Belly Smoothies will help you
• Lose up to 16 pounds in 14 days.
• Melt away stubborn fat, from your belly first.
• Put an end to bloating and discomfort.
• Detox from unhealthy foods so you enjoy all-day energy.
• Turn off your fat storage genes and make long-term weight loss effortless.
• Look and feel younger and healthier than ever!

An excerpt from Zero Belly Smoothies


If you had the power to make your life better with the push of a button, would you use it?
Well, that power is yours. With one simple whir, you can turn your body into a hyper-efficient fat-burning machine by revving up your metabolism, toning and defining your muscles, and turning off the genes that contribute to fat storage and myriad chronic health issues.
All you need is a blender, and the recipes in this book.
Zero Belly Smoothies are plant-based protein drinks that have been shown to make a dramatic impact on people’s lives in as little as 72 hours. They will flatten your belly, heal your digestive system and strip away unwanted fat in just days. All you need to do is blend them up and drink them down.
I know these smoothies will work for you, and fast, because I’ve seen them work for so many others. Consider the case of Fred Sparks. A 39-year-old emergency-response advisor from Katy, Texas, Fred used Zero Belly Smoothies as part of his weight-loss program. “I noticed results in the first week,” he says. “It really was amazing.” Fred lost 21 pounds and 5 inches off his waist in just the next six weeks.
Martha Chesler, 52, who lost 21 pounds and 7 inches off her waist in less than 40 days, had the same experience:
“I saw results immediately.” she says. In fact, our original Zero Belly Test Panel of more than 500 men and women lost as much as 3 inches off their waist in less than a week, and 16 pounds in the first 14 days. Now, you can achieve results like these even more quickly, with this carefully created, highly effective sample of the delicious drinks you’ll find in Zero Belly Smoothies.

What’s So Special About Smoothies?
They are fast, effective, simple to whip up, and delicious, which makes them ideal for a weight loss program. Consider the proof:
In a 2012 study in Current Nutrition and Food Science, researchers put a group of obese adults on a regimen in which they replaced breakfast and dinner with a high-protein smoothie. That was all: no exercise, no limit on what else they could eat. After 12 weeks, the subjects lost up to 18.5 pounds and reported significant improvements in “physical functioning, general health, vitality, and mental health.”
A high-protein diet featuring meal- replacement drinks is more effective than exercise at helping people lose weight and keep it off, according to a 2013 meta- analysis of 20 studies in The American Journal of Clinical Nutrition.
Five percent of your body weight is the gold standard to prove effectiveness in a weight-loss plan. But smoothie-based plans beat that number consistently. In a study at the University of Kentucky in 2009, patients were asked to drink at least 3 smoothies a day. After 18 weeks, the subjects lost an average of 16.4 percent of their body weight—up to 44 pounds!
When researchers at Columbia University crunched the numbers on six separate studies following dieters on either a smoothie-based plan (one or two smoothies a day) or a reduced-calorie plan, they found that both sets lost weight, but those on the smoothie-based plan experienced “significantly greater weight loss” at both the 3-month and 1-year marks. In a 2015 review of studies on weight-loss plans, researchers at Johns Hopkins reported that participants who used low-calorie meal-replacement drinks like smoothies lost more weight than other dieters over the course of 4 to 6 months.
Are you ready to make the magic work for you?

It Worked for Her!
I’ve been amazed and gratified at how Zero Belly has changed the lives of thousands of Americans. Before going on the plan, Jennie Joshi would avoid walking past the full-length mirror in her Morristown, NJ home. “I hated the way I looked. I wanted to see the old me,” says the mother of two.
Anyone who has had a child knows that feeling and how difficult it can be to lose pregnancy weight. A University of Chicago study last year found that 75 percent of moms were heavier than they were pre- pregnancy a year after giving birth and 45 percent had retained more than 10 pounds.
A high-risk pregnancy made it impossible for Joshi to exercise; she even had to limit her walking. Her weight gain was more than she had expected, and she struggled to lose it. “I really wanted to get rid of my belly,” she says. But the calorie-cutting diet programs weren’t doing it for her; then she learned about the Zero Belly Diet and signed up as one of the program’s first test panelists. She was drawn to its no-sacrifice approach: “I loved that I could just focus on eating healthy foods and not worry about controlling portions.”
She says the healthy recipes in the book made the difference because they included family-friendly options that even a foodie like her husband would enjoy. “Unlike a fad diet that you do once and stop, it’s a lifestyle that’s easy to make your own,” she says.
Joshi also followed the program’s suggested workouts and mixed in some running, spinning, and Zumba. In just four weeks, she lost 11 pounds.
“I saw the pregnancy pooch leaving,” she says, and she pressed on, eventually dropping 26 pounds and fitting into a size 4 dress.
Her co-workers were astonished. “They wanted to know what I was doing.”
What she was doing was drinking Zero Belly Smoothies.

And It’ll Work for You!
One of the key components in Zero Belly Smoothies is the veggie protein powder and use of nut or dairy-free milks. Unless you’ve been living in an igloo for the past two decades, you should know by now that Americans do not eat enough fruits and vegetables. In fact, recent surveys have found that only about 30 percent of Americans are eating the recommended 5 or more servings of fruits and vegetables a day. That’s a pretty pitiful performance and no doubt a partial cause of the obesity epidemic that grips this nation.
Another cause: Over the years, the line between smoothie and milkshake has been irrevocably blurred by the beverage industry. What was once a reliable, all-fruit concoction is now likely to be an ice-cream-and-added-sugar extravaganza, capable of carrying over 2,000 calories a serving (see Smoothie King, Hulk).
If you happen to be one of those 7 out of 10 of us who don’t eat enough plant matter, then you need to make fast friends with Zero Belly Smoothies. They’re the quickest, most delicious way to make up for the fruit-and-vegetable deficit, no ice cream required: Roll out of bed, toss some fruit in a blender, top with a bit of liquid, hit “liquefy.” Boom! You’re on the path to a skinnier, healthier you!

Try the smoothie that ABC News correspondent Dan Harris called “dazzling!” Consider using wild blueberries (you can find them in the freezer section); they’re higher in just about every nutrient than conventional blueberries. 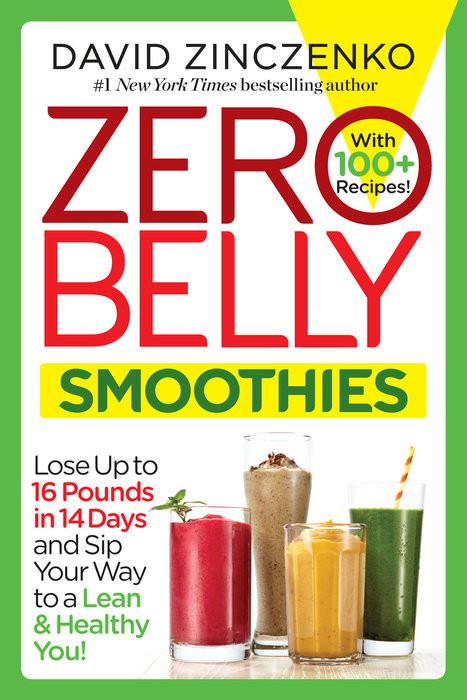