NEW YORK TIMES BESTSELLER • In this collection of personal essays, the beloved star of Gilmore Girls and Parenthood reveals stories about life, love, and working as a woman in Hollywood—along with behind-the-scenes dispatches from the set of the new Gilmore Girls, where she plays the fast-talking Lorelai Gilmore once again.

With a new bonus chapter

In Talking as Fast as I Can, Lauren Graham hits pause for a moment and looks back on her life, sharing laugh-out-loud stories about growing up, starting out as an actress, and, years later, sitting in her trailer on the Parenthood set and asking herself, “Did you, um, make it?” She opens up about the challenges of being single in Hollywood (“Strangers were worried about me; that’s how long I was single!”), the time she was asked to audition her butt for a role, and her experience being a judge on Project Runway (“It’s like I had a fashion-induced blackout”).

Some more things you will learn about Lauren: She once tried to go vegan just to bond with Ellen DeGeneres, she’s aware that meeting guys at awards shows has its pitfalls (“If you’re meeting someone for the first time after three hours of hair, makeup, and styling, you’ve already set the bar too high”), and she’s a card-carrying REI shopper (“My bungee cords now earn points!”).

Including photos and excerpts from the diary Graham kept during the filming of the recent Gilmore Girls: A Year in the Life, this book is like a cozy night in, catching up with your best friend, laughing and swapping stories, and—of course—talking as fast as you can.

An excerpt from Talking as Fast as I Can

Some of the most exciting things that happened in my life took place before I turned six years old. I was born in Honolulu, Hawaii, which is awesome right there, but three weeks later, before I even had time to work on my tan, we moved to Japan. JAPAN. The home of my most favorite food ever: mashed peas. Well, that was probably my favorite food back then; what a waste, since I could have been eating spicy tuna rolls with extra wasabi. Damn you, Baby Lauren, and your infantile palate! Well, to be fair, you were an infant. Sorry I yelled.

In Tokyo, we lived with my grandmother for a while, and I had a Japanese nanny, or uba—which, incidentally, translates to “milk mother,” something I just found out by looking it up. (Hold, please, while I call my therapist.) Her name was Sato-san, and I loved her, and as a result, my first word was in Japanese. It was o-heso. You might think that’s Japanese for “mommy” or “daddy,” but no, o-heso is Japanese for “belly button,” which I think already proves I am a very unusual, deep, and contemplative person and there’s really nothing left to say, thank you for buying this book, the end.

Wait, a few more things. My mother, the daughter of missionaries, had grown up in Japan and spoke fluent Japanese. She was also incredibly smart and beautiful, a combination that led to my grandmother holding me while we watch my mother, who is on television! Back when there were just three channels in America, and maybe even fewer in Tokyo, and an air of mystery surrounding the whole thing—not like today, when the statistical probability of not at some point stumbling onto your own reality show is inconceivably low. Television had only recently been invented then, and there she was actually on it, and I was so little I was probably just thinking about mashed peas again. Or, more likely, my favorite subject: belly buttons.

In related news, apparently on some GikiWoogle-type page of mine, I am quoted as saying, “Belly buttons are important.” Which, while obviously sort of true, medically speaking, taking into account the life-giving properties of the umbilical cord, was also clearly a joke. Yet I can’t tell you how many times during an interview a journalist gets that somber I’m-going-in-for-the-kill look I love so much and asks me, with knitted-brow faux sincerity: “Do you really think belly buttons are important?” Let me clear the air once and for all: um, no, I do not. Although this book isn’t very long yet and I’ve already talked about belly buttons quite a bit. Damn you, tabloid journalists! You wise Truth Uncoverers! Again, sorry—the yelling must stop.

So, anyway, there she was, my mother, on the largest television available at the time, which was roughly the size of a Rubik’s cube. Also, check out her dope sixties Priscilla Presley look! Her ability to speak the language as a non-native was so unusual at the time that she was asked to appear on a Japanese daytime talk show.

My parents weren’t together very long. They hadn’t known each other well when they decided to get married, and then they had me right away, when they were both just twenty-two years old, and—well, that about sums it up. They were very, very young. At the time, my mom was also trying to pursue a career as a singer, and it was decided I should stay with my dad. They parted as friends, and my father made the obvious next choice, something we’d all probably do in this situation: he moved us to the Virgin Islands, where we lived on a houseboat. I slept in a bunk-bed-type thing that was also the kitchen. I was picked up for nursery school by the bus, which was actually a motorboat. We moved there because . . .

You know what? I don’t remember exactly. Let’s call my dad and ask him. He probably won’t pick up because he’s on the East Coast, and it’s a Saturday in the springtime, so unless it’s pouring down rain, he’s out playing golf. But I’ll give you a visual just in case, so you too can play Call My Dad at home!

I know, isn’t it a shame we look nothing alike? Okay, let’s see if he’s home. Ring, ring, ring, ring. I told you. He’s probably not—

Dad: Hello?
Me: Oh, hi! I didn’t think you’d be home.
Dad: It’s raining here.
Me: Well, then, that explains it. Hey, remind me—why did we live on a houseboat that time?
Dad: Who is this?
Me: You have other children you lived on a houseboat with?
Dad: No, I have other children who call me more.
Me: Dad, please. I call you all the time. So this is for the book, and—
Dad: Is this going to be another befuddled father character, like in your last book?
Me: Dad, I wouldn’t call that character befuddled in general. He’s just a little befuddled by technology.
Dad: Wait—what did you say? I couldn’t hear you. I just hit one of these dumb phone buttons wrong.
Me: Um, yeah. I was just saying that the father character in my first novel—the New York Times bestseller Someday, Someday, Maybe, published by Ballantine Books, an imprint of Random House, and now available in paperback—is not exactly befuddled, and anyway, he’s only a little bit you.
Dad: Why are you talking like that?
Me: Like what? I was just thinking about how Christmas is right around the corner, but no matter how you choose to celebrate the holidays, books in general make great gifts!
Dad: Like that. Like you’re selling things to an audience. Are you on Ellen right now?
Me: Dad, I wouldn’t be calling you from the set of Ellen.
Dad: Oh, oh, I’m fancy, I live in Hollywood, where people aren’t allowed to call their fathers from the set of the Ellen show.
Me: Dad, please. Why did we live on the houseboat again?

Dad: Well, I was working for that congressman, and the hours were long, and I’d drop you off in the morning and not see you until after 6:00 p.m., and I felt bad about that. I wasn’t sure I was on the right career path anyway. Also, I was sort of seeing this girl—you remember the one who owned the horse? Well, she lived there off and on, and I thought I’d go there too, and write, and . . .

I’m going to interrupt my father here (well, actually, he’s still talking, so shhh—don’t tell him). But I have to explain to you that, as a kid, I thought my father never dated anyone at all until he met and married my stepmother. It wasn’t until years later that I figured out the young ladies who sometimes came around may have been a wee bit more than the “cat sitter,” that “nice woman I play tennis with,” and the “girl who owned the horse.” And I don’t blame them. I mean, who wouldn’t want to “cat-sit” for this guy?

By the way, can we talk about the unnecessary thickness of children’s belts of the 1970s? I mean look at the— Oops, my dad’s still on the phone!

Dad: . . . and anyway, she knew these people at the marina in St. Thomas.
Me: So did we, like, sail around the island and stuff?
Dad: Oh, no. The engine didn’t work on the boat.
Me: The engine didn’t . . .? We lived on a giant floating bathtub that went nowhere?
Dad: It was a strange place, I’ll admit, that marina— but friendly. Very bohemian. Everybody there was sort of dropping out from society, which we were too, in a way—for weeks after we’d left D.C., I’m pretty sure my mother still thought I worked on Capitol Hill. But I got to spend more time with you, which was the goal. It was beautiful there. We drove around a lot and went to the beach. It probably seems strange to you now, but it was a 1970s thing to do, I guess. And we had fun.
(A pause as we both reminisce.)
Me: You did a lot for me, Dad. I love you.
Dad: I love you too, kid.
(Another pause.)
Dad: Who is this again?

Lauren Graham is an actor, writer, and producer best known for her roles on the critically acclaimed series Gilmore Girls and Parenthood. She is also the New York Times bestselling author of In Conclusion, Don't Worry About It; Talking as Fast as I Can; and Someday, Someday, Maybe. Graham has performed on Broadway and appeared in such films as Bad Santa, Because I Said So, and Max. She holds a BA in English from Barnard College and an MFA in acting from Southern Methodist University. She lives in New York and Los Angeles. 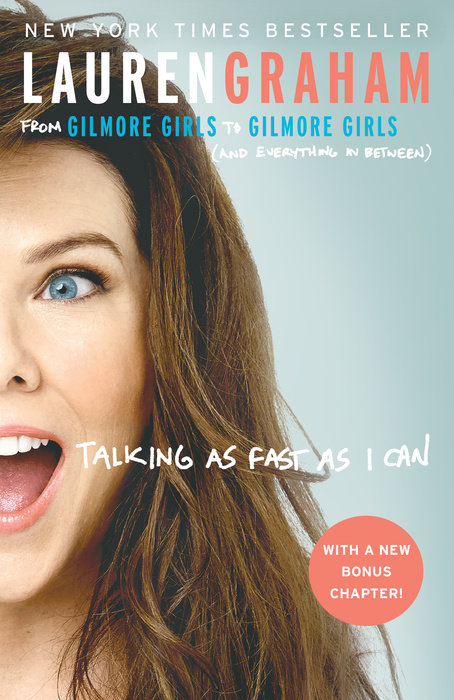