In this irresistible cozy mystery from the USA Today bestselling author of The Book Club Murders, amateur sleuth Charley Carpenter fights to avenge a crime that hits far too close to home.

Mulbridge House stood, silent and decaying, deep in the woods at the heart of Oakwood, Ohio, long before the passing of Augusta Mulbridge. Yet suddenly everyone in town seems to have a stake in its fate: the greedy heirs, eager to tear it down for a tidy profit; the local preservationists, determined to maintain it as an historic site; the angry neighbors, staunchly opposed to the construction of a modern subdivision. Even Charley Carpenter is forced to admit that her beloved shop, Old Hat Vintage Fashions, could use an infusion of the estate’s treasures.

The clock is ticking. The wrecking ball is ready to swing. All that stands between Mulbridge House and oblivion is one final vote. That, and murder . . .

The trouble begins when Charley walks into auctioneer Calvin Prescott’s office to find her cherished family friend crumpled on the floor. Detective Marcus Trenault quickly connects his death to a string of increasingly violent burglaries plaguing Oakwood. But when Charley uncovers a link to a massive land swindle worth millions, not to mention a drug ring operating out of the manor’s abandoned outbuildings, that theory crumbles faster than Mulbridge House. Now Charley’s racing to catch a killer before everything falls apart.

An excerpt from The Antique House Murders

The house reeked of death.

Charley picked her way carefully over and around the boxes, crates, and haphazard piles of debris that choked the upper gallery, breathing through her mouth in an attempt to avoid the worst of the smell. Geez, it stank even worse up here than it had in the main rooms downstairs. As she snagged her toe and nearly took a header into a stack of picture frames, she wondered if the heavy work boots and rugged jeans she’d worn were sufficient protection against contracting tetanus.

Her goal was a room at the end of the hall—the “Blue Room,” according to Calvin Prescott, the estate appraiser handling the Mulbridge family’s auction and general sale. Mulbridge House itself was scheduled for the wrecking ball, just as soon as the eager heirs could liquidate the contents and obtain final approval from the Oakwood Planning Commission. She’d read the newspaper story with interest: complete demolition of the mansion and outbuildings, then a new street and subdivision of the land into fourteen generous wooded lots. Landlocked as was this wealthy, insular suburb of Dayton, Ohio, those lots would be a smoking-hot commodity, with price tags to match. That is, they would be if the late Augusta Mulbridge’s son and daughter could convince the city to approve their development plan—not a slam dunk by any means, with neighbors and preservationists screaming bloody murder.

Arriving without further misadventure before a massive carved wood door, Charley trailed a finger over the tracery of leaves and flowers that decorated eight separate square panels, each one a different blossom. What a beautiful piece of workmanship. Too bad it was discolored by water damage. Every antique fitting in Mulbridge House was like that: heavy, ornate, the very best quality, but sinking into decay, from the fabulous bronze laurel wreath door knockers now green with neglect to the crumbling plaster friezes in the upper gallery. Even the name of this house evoked a lost age of wealth and privilege, when massive estates on secluded roads were too isolated—and too exclusive—for a mere street address.

She pushed open the heavy door. Its hinges squealed as if they hadn’t been oiled since the Truman administration. She shivered. This whole place was like a Hollywood horror movie set, right down to the cobwebs and creaky floorboards.

It was more than just the smell, Charley decided. Mulbridge House exuded a palpable despair, as if the house yearned for better times still remembered. It was starting to get to her—she, a professional, a dealer in the old and discarded. Lord knew she’d waded through plenty of estate sales, digging through the leavings of the dead.

Detachment was a necessary skill for a vintage clothing dealer.

She considered herself more than half a treasure hunter, a bit like Indiana Jones, or maybe Lara Croft. She grinned. There was a Hollywood image for you. Charley Carpenter, red hair flying, slashing her way through a treacherous jungle of moldy castoffs, searching for the shining jewel, the golden idol, the key to the hidden vault. Maybe she should get a bullwhip.

Once inside the Blue Room, she was relieved to discover that the overall creepiness factor was reduced by the late winter sunlight flooding through tall, deep-silled windows. Calvin’s minions had finished in here. Other than a radiator and a remarkable ceiling fixture of cut blue glass, the room contained just three things. An aluminum rack on wheels held four white plastic garment bags, the rack’s gleaming newness contrasting sharply with all this antiquity. Next to it was a large cardboard box, top flaps tucked shut. Two preprinted white labels, each bearing the Prescott Auctions logo, announced that the contents were shoes and handbags. A second box bore a label declaring it contained hats. Charley shivered again, this time in anticipation.

She slowly pulled down the zipper of one of the garment bags, then parted the sides to reveal the bag’s contents.

She quickly opened the other bags and checked their contents. Suits, skirts, dresses, more evening wear, two full-length furs, and everything in very good condition. Charley knew Augusta Mulbridge had been a virtual recluse before her death eighteen months ago. Most of these things had probably hung untouched in her wardrobe for decades. The midnight blue Chanel still had the original sales tags. Imagine buying a Chanel and never having the occasion to wear it, she thought. How sad.

She checked the lists pinned to each zipper pull, Calvin’s neat handwriting itemizing the contents and estimating their value. Well, there was going to be a conversation about pricing, that much was clear.

She knew she’d take the lot. And she knew Calvin knew it. It was one of the reasons he’d invited her to the dealer presale. There were plenty of bigger dealers he could have called in from Cincinnati or Columbus, online sellers with deep pockets who wouldn’t need to dicker down. But as an old friend of her father’s, Calvin always looked out for her. He’d literally watched her grow up. While the men drank homemade root beer and played dominoes in the tiny back office, a very young Charley had spent more than a few delightful afternoons exploring dusty treasures in the Prescott showroom. Somewhere around fourth grade she’d started coming on her own, knowing she’d always find a warm welcome, as well as access to Calvin’s cookie stash. Those solo safaris marked the beginning of her fascination with vintage clothing. Since she’d opened Old Hat three years ago, Calvin Prescott had taken a fatherly interest in her and her tiny shop, giving her advice about pricing, sending a few choice clients her way, even clueing her in on his secret recipe for lifting the musty odor of age and neglect from fragile fabrics.

He was an occasional dinner guest at the Carpenter home on Hawthorn Boulevard, evenings that delighted her housebound father. Each time he popped into her shop in his bottle green coat and polka-dot bow tie, offering advice or brimming with a juicy piece of industry gossip, her affection for their old friend grew. Despite the forty-year difference in their ages, Calvin Prescott was a true kindred spirit.

Charley pulled open the flaps on the first box. Glittering evening bags formed a top layer over a number of lidded shoeboxes. She checked for damage, but everything looked perfect, many of the shoes unworn. Knowing Calvin, he’d already pulled any item that was less than top quality and consigned it to the general sale.

That’s where all the crap she’d tripped over on her way up here was headed. The general public would never see the inside of the Blue Room, or indeed most of the rooms in Mulbridge House. Calvin always handled the big estates that way, with an invitation-only dealer sale on Thursday and Friday, an auction of selected items on Saturday, then the general sale on Sunday. Anything still unsold after all that was landfill.

Charley decided Calvin was unlikely to have hidden any dogs at the bottom, so she closed the flaps and turned to the final box. hats.

This box was crammed full, and what a variety! Charley pulled out a green velvet Robin Hood cap and smoothed the shiny black feather tucked into the band. Had Augusta Mulbridge actually worn this? Straws, silks, veils and fascinators, felt and wool—there was enough headgear here to more than replenish her barren post-holiday shelves. She tossed the green cap back in and shut the lid. Another no-brainer. Of course she wanted them all.

Every sequin, every bugle bead, every silk rose.

Leslie Nagel is the USA Today bestselling author of The Book Club Murders, The Antique House Murders, The Advice Column Murders, and The Codebook Murders. She lives in the real city of Oakwood, Ohio, where she teaches writing at a local community college. After the written word, her passions include her husband, her son and daughter, hiking, tennis, and strong black coffee, not necessarily in that order. 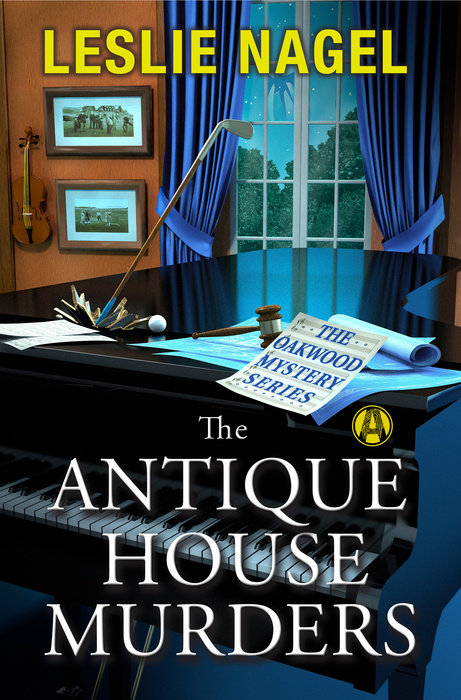