In her first memoir, award-winning novelist Yiyun Li offers a journey of recovery through literature: a letter from a writer to like-minded readers.

“A meditation on the fact that literature itself lives and gives life.”—Marilynne Robinson, author of Gilead

“What a long way it is from one life to another, yet why write if not for that distance?”

Startlingly original and shining with quiet wisdom, this is a luminous account of a life lived with books. Written over two years while the author battled suicidal depression, Dear Friend, from My Life I Write to You in Your Life is a painful and yet richly affirming examination of what makes life worth living.

Yiyun Li grew up in China and has spent her adult life as an immigrant in a country not her own. She has been a scientist, an author, a mother, a daughter—and through it all she has been sustained by a profound connection with the writers and books she loves. From William Trevor and Katherine Mansfield to Søren Kierkegaard and Philip Larkin, Dear Friend is a journey through the deepest themes that bind these writers together.

Interweaving personal experiences with a wide-ranging homage to her most cherished literary influences, Yiyun Li confronts the two most essential questions of her identity: Why write? And why live?

Praise for Dear Friend, from My Life I Write to You in Your Life

“Li has stared in the face of much that is beautiful and ugly and treacherous and illuminating—and from her experience she has produced a nourishing exploration of the will to live willfully.”—The Washington Post

“Li’s transformation into a writer . . . is nothing short of astonishing.’”—The New York Times Book Review

“Li is an exemplary storyteller and this account of her journey back to equilibrium, assisted by her closest companion, literature, is as powerful as any of her award-winning fiction, with the dark fixture of her Beijing past at its centre.”—Financial Times

“Every writer is a reader first, and Dear Friend is Li’s haunted, luminous love letter to the words that shaped her. . . . Her own prose is both lovely and opaque, fitfully illuminating a radiant landscape of the personal and profound.”—Entertainment Weekly

“Yiyun Li’s prose is lean and intense, and her ideas about books and writing are wholly original.”—San Francisco Chronicle

An excerpt from Dear Friend, from My Life I Write to You in Your Life

My first encounter with before and after was in one of the fashion magazines my friends told me to subscribe to when I came to America. I duly followed their advice—­ I had an anthropologist’s fascination with America then. I had never seen a glossy magazine, and the print and paper quality, not to mention the trove of perfumes waiting to be unfolded, made me wonder how the economics of the magazine worked, considering I paid no more than a dollar for an issue.

My favorite column was on the last page of the magazine, and it featured celebrity makeovers—­hairstyle and hair color, for instance—­with two bubbles signifying before and after. I didn’t often have an opinion about the transformation, but I liked the definitiveness of that phrase, before and after, with nothing muddling the in-between.

After years of living in America, I still feel a momentary elation whenever I see advertisements for weight-­loss programs, teeth-­whitening strips, hair-­loss treatments, or plastic surgery with the contrasting effects shown under before and after. The certainty in that pronouncement—­for each unfortunate or inconvenient situation, there is a solution to make it no longer be—­both attracts and perplexes me. Life can be reset, it seems to say; time can be separated. But that logic appears to me as unlikely as traveling to another place to become a different person. Altered sceneries are at best distractions, or else new settings for old habits. What one carries from one point to another, geographically or temporally, is one’s self. Even the most inconsistent person is consistently himself.

I was leaving to teach class when an acquaintance who lived across the country in New Hampshire called my office. She had traveled to a nearby city. I talked to her for no more than two minutes before telling my husband to go find her. He spent twelve hours with her, canceled her business appointments, and saw to it that she flew back home. Two weeks later her husband called and said she had jumped out of her office on a Sunday evening. He asked me to attend her memorial service. I thought for a long time and decided not to.

Our memories tell more about now than then. Doubtless the past is real. There is no shortage of evidence: photos, journals, letters, old suitcases. But we choose and discard from an abundance of evidence what suits us at the moment. There are many ways to carry the past with us: to romanticize it, to invalidate it, to furnish it with revised or entirely fictionalized memories. The present does not surrender so easily to manipulation.

I don’t want the present to judge the past, so I don’t want to ponder my absence at her memorial service. We had come to this country around the same time. When I told her that I was going to quit science to become a writer, she seemed curious, but her husband said that it was a grave mistake. Why do you want to make your life difficult? he asked.

I have had a troublesome relationship with time. The past I cannot trust because it could be tainted by my memory. The future is hypothetical and should be treated with caution. The present—­what is the present but a constant test: in this muddled in-­between one struggles to understand what about oneself has to be changed, what accepted, what preserved. Unless the right actions are taken, one seems never to pass the test to reach the after.

After the second of two hospital stays following a difficult time, I went to a program for those whose lives have fallen apart. Often someone would say—­weeping, shaking, or dry eyed—­that he or she wished to go back in time and make everything right again.

I wished, too, that life could be reset, but reset from when? From each point I could go to an earlier point: warning signs neglected, mistakes aggregated, but it was useless to do so, as I often ended up with the violent wish that I had never been born.

I was quiet most of the time, until I was told I was evasive and not making progress. But my pain was my private matter, I thought; if I could understand and articulate my problems I wouldn’t have been there in the first place.

Do you want to share anything, I was prompted when I had little to offer. By then I felt my hope had run out. I saw the revolving door admitting new people and letting old people out into the world; similar stories were told with the same remorse and despair; the lectures were on the third repeat. What if I were stuck forever in that basement room? I broke down and could feel a collective sigh: my tears seemed to prove that finally I intended to cooperate.

I had only wanted to stay invisible, but there as elsewhere invisibility is a luxury.

I have been asked throughout my life: What are you hiding? I don’t know what I am hiding, and the more I try to deny it, the less trustworthy people find me. My mother used to comment on my stealthiness to our guests. A woman in charge of admission at the public bathhouse often confronted me, asking what I was hiding from her. Nothing, I said, and she would say she could tell from my eyes that I was lying.

Reticence is a natural state. It is not hiding. People don’t show themselves equally and easily to all. Reticence doesn’t make one feel lonely as hiding does, yet it distances and invalidates others.

There are five time zones in China, but the nation uses a unified time—­Beijing time. When the hour turns, all radio stations sound six beeps, followed by a solemn announcement: “At the last beep, it is Beijing time seven o’clock sharp.” This memory is reliable because it does not belong to me but to generations of Chinese people, millions of us: every hour, the beeping and the announcement were amplified through loudspeakers in every People’s Commune, school, army camp, and apartment complex.

But underneath this steadfastness, time is both intrusive and elusive. It does not leave us alone even in our most private moments. In every thought and feeling about life, time claims a space. When we speak of indecision, we are unwilling to let go of a present. When we speak of moving on—­what a triumphant phrase—­we are cutting off the past. And if one seeks kindness from time, it slips away tauntingly, or worse, with indifference. How many among us have said that to others or to ourselves: if only I had a bit more time . . .

One hides something for two reasons: either one feels protective of it or one feels ashamed of it. And it is not always the case that the two possibilities can be separated. If my relationship with time is difficult, if time is intrusive and elusive, could it be that I am only hiding myself from time?

I used to write from midnight to four o’clock. I had young children then, various jobs (from working with mice to working with cadaver tissue to teaching writing), and an ambition to keep writing separate from my real life. When most people were being ferried across the night by sleep, unaware of time, unaware of weather, I felt the luxury of living on the cusp of reality.

Night for those sound sleepers was a cocoon against time. For me, I wanted to believe, it was even better. Time, at night, was my possession, not the other way around.

A friend came to see me when I visited Beijing in 2008. We talked about her real estate investments and our old schoolmates. Half an hour after she left my parents’ apartment, she called. She hadn’t wanted to mention it in person, but a boy who had been close to me when we were teenagers had committed suicide, along with a lover.

Our dead friend had had an affair, and both he and the woman had gone through difficult divorces only to be ostracized as adulterers.

It’d have been better had he gone to America, my friend said.

Yiyun Li is the author of six works of fiction—Must I Go, Where Reasons End, Kinder Than Solitude, A Thousand Years of Good Prayers, The Vagrants, and Gold Boy, Emerald Girl—and the memoir Dear Friend, from My Life I Write to You in Your Life. She is the recipient of many awards, including a PEN/Hemingway Award, a PEN/Jean Stein Book Award, a MacArthur Foundation fellowship, and a Windham-Campbell Prize, and was featured in The New Yorker’s 20 Under 40 fiction issue. Her work has appeared in The New Yorker, A Public Space, The Best American Short Stories, and The O. Henry Prize Stories, among other publications. She teaches at Princeton University and lives in Princeton, New Jersey. 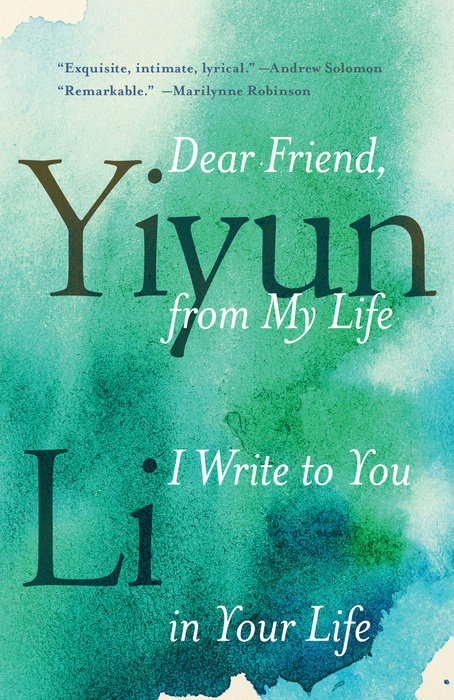