“One of our major novelists” (Salman Rushdie) tells the story of a woman reflecting on her uncompromising life, and the life of a former lover, in this provocative novel.

“Yiyun Li is one of my favorite writers, and Must I Go is an extraordinary book.”—Meg Wolitzer, New York Times bestselling author of The Female Persuasion and The Interestings

Lilia Liska has shrewdly outlived three husbands, raised five children, and seen the arrival of seventeen grandchildren. Now she has turned her keen attention to the diary of a long-forgotten man named Roland Bouley, with whom she once had a fleeting affair.

Increasingly obsessed with Roland's intimate history, Lilia begins to annotate the diary with her own rather different version of events, revealing the surprising, long-held secrets of her past. She returns inexorably to the memory of her daughter Lucy. This is a novel about life in all its messy glory, and of a life lived, by the extraordinary Lilia, absolutely on its own terms. With great candor and insight, Yiyun Li navigates the twin poles of grief and resilience, loss and rebirth, that compass a human heart.

An excerpt from Must I Go

The exhortation, or the plea, appeared twenty-three times in Roland Bouley’s diaries. Every time Lilia read the line, she reassured him: Yes, Roland, I’m here, taking notice. If one of her children in their younger years had asked her not to ever die, Lilia would have spoken with equal certainty: I never will. But that was a promise made to be broken. Roland had not asked for the impossible, only the eternal. Who else could be his posterity but her?

The single volume of his diaries, over seven hundred pages, was the only book Roland had published. He had culled sixty years of entries, and left instructions to have them printed by a friend’s press. He had left everything to Peter and Anne Wilson, his wife Hetty’s favorite niece.

Lilia disapproved of the Wilsons. Resented them wholeheartedly. They had edited Roland’s diaries from three volumes into one, inserting ellipses where records should have been kept intact. The first time she read the book, and Peter Wilson’s introduction that justified the culling, Lilia had sent a letter to Aubrey Lane Press, the address a P.O. box in Dartmouth, Nova Scotia. What arrogance to say that Roland’s journals were “at times repetitive.” Life is repetitive, she wrote. Loyalty to a dead man should be the editor’s foremost requirement. She had received no reply.

Three volumes into one: These people might as well take a second job as cooks, whisking and reducing Roland’s lifework into a bowl of gravy. In his introduction, Peter Wilson flaunted his editorial skill, praising his discretion in deciding what to omit and his moral integrity in respecting Roland’s wishes without causing undue distress for the family members.

What distress? What family? Hetty had not given Roland any children. More than half of the finished book was about Roland’s marriage. If the Wilsons thought that, by omission, they could make Hetty the center of Roland’s life, they had made fools of themselves. Anyone reading Roland’s diaries would know that Sidelle Ogden was the only one for whom he had made any space in his heart. That, for a man who had mostly only loved himself, was a feat.

Lilia had met Roland four times in her life. Had she told people that she had been rereading his diaries for years now, they would have called her crazy—man crazy, book crazy—but how wrong people often were. A story is not always a love story. A book is much more than just pages of words.

But the world was full of people like the Wilsons who understood nothing. They thought that they were humoring Roland by putting some pages of his diaries into print. They felt no qualms about forgetting Roland. Typical of him to entrust his posterity to people who dedicated so little of their lives to remembering him.

“I-m-b-o-d-y,” Lilia said, spelling her name out for the two children. Patience was not her virtue, but if she had enough to live for eighty-one years, there was no reason she could not spare some for the third graders. Or were they in second grade? It didn’t matter. She would long be dead before they would grow up into something remotely interesting. Though even that meager prospect was not guaranteed. Lilia was the oldest among six siblings, and she had raised five children, who had given her seventeen grandchildren, so she knew what would happen to the young. Yes, they start out warm and pure like a bucket of fresh milk, but sooner or later they turn stale.

Lilia had many verdicts to deliver when it came to children. One of the most dire she had given to Lola, her great-granddaughter. If Lola were someone else’s blood Lilia wouldn’t have minced words. Born to lose, that was what the girl was. Though of course Lilia would not say so to Katherine, Lola’s mother. At Lilia’s age all the other grandchildren were the garnish on her life, but Katherine, who had not been an essential ingredient to her own parents, would remain essential to Lilia for as long as she lived.

The week before, when Katherine had come to visit, she had gone on about Lola for so long that Lilia had no time to ask Katherine about her own marriage, which was seemingly heading into dangerous waters. Having predicted such a course, Lilia considered it her due to be kept informed of every deterioration. The Titanic would have been a dreary story if all we were allowed to know were its departure from the harbor (like a virgin) and its burial at sea (in its bridal gown).

And poor Lola. Chances are, she would turn out not to be enough of a ship to be wrecked by life.

Here was Lola’s latest failure. A playmate’s father, a real estate developer, had put his kindergarten-age daughter in charge of naming the streets and cul-de-sacs with her friends’ names. Only two girls from Lola’s playgroup had been left out.

What kind of parents would do that, Katherine complained.

What’s the matter with not having a street bearing your name? Lilia tried not to point out that, had Lola’s name been chosen, Katherine would have thought the idea ingenious. “Lola” had too many vowels for a too-short name. Too unconventional. But Lilia had kept these judgments to herself. What’s the other girl’s name? Lilia asked. My goodness, I hope her last name is not Cooper, she said. It’s Minnie, Katherine said again, spelling the name with the same impatience Lilia now spelled out “Imbody” for the young visitors.

“Make sure it starts with an I,” she told them. Lilia had kept her second husband’s last name. Not that Norman Imbody was that special to her, but she had liked how the name sounded, and would not give it up for Milt Harrison. “Mrs. Imbody,” Lilia said now. “Call me Mrs. Imbody.”

Gilbert Murray would have comforted Katherine, saying that Lola was too precious a name to share with a street. Norman Imbody would have matched Katherine’s dolefulness and lamented, most unhelpfully, that the world is not a fair place. Milt Harrison would have made up a ditty with the chosen names, Rosalie, Natalie, Caitlin, Genevieve, all of them given their mishaps.

Some women specialize in marrying the wrong people. Lilia had not been one of them. But all of these husbands were gone, the memory of their large hearts and small vices no more than the vanilla pudding at dinner: low-calorie, no sugar, with barely enough flavor. Who’d have known that she would live to see a day when food prides itself on offering as little as possible?

Lilia had to be strategic with Katherine. Like her mother, Lucy, she was an expert at making a life out of disappointments. Lucy had taken her own life at twenty-seven, two months after giving birth to Katherine. In earlier years Lilia had imagined showing off any little accomplishment of Katherine to her dead mother. Look at baby Katherine’s new teeth! Look at her soft curls! Look how much you’ve missed. Lilia had never fought so fiercely with someone on a battlefield called cuteness.

And now Lola seemed to be catching up, her share of disappointments enormous for her age. Where did all three of them get that trait? Not from Lilia. She did not have a porous heart, and that, she knew, was the condition disappointments needed as a breeding ground. Could it be their inheritance from Roland? Though he himself would’ve been the first to protest, insisting that he was born without a heart.

No books written, no offspring—at least no one legitimate. And if there were bastards carrying my blood, they were not known to me, Roland wrote in his diary. 5 June 1962. No woman’s warmth enough to melt my heart, if, of course, there is a heart inside me.

“Mrs. Embody, is it okay if we record this interview?” The boy in front of Lilia checked his notes before raising his face, the black and white of his eyes giving her a shock. One only saw droopy lids and fogged-up eyes these days at Bayside Garden.

The children were still here! Surprise, surprise, Lilia thought, how nimbly the mind travels in the time it takes a body to get itself uncomfortably settled in a chair.

This was one of those days when Lilia wouldn’t mind playing truant from life. Coffee lukewarm at breakfast (and weak, but that was a given, as the kitchen only offered coffee as weak as the legs of the men in residence); Phyllis taking a seat next to Lilia (uninvited, though anyone sitting next to her fell into the category of the unwelcome); Mildred, sitting across from Lilia, talking about what to buy for her granddaughter’s birthday (who cares); Elaine demanding everyone’s participation in an oral history project led by a nearby school. The head teacher was her niece, Elaine announced.

Lilia had decided a little distraction would do her good. Now she could see it was a mistake. “Call me Mrs. Imbody,” she said. “Did you spell it wrong?"

Yiyun Li is the author of six works of fiction—Must I Go, Where Reasons End, Kinder Than Solitude, A Thousand Years of Good Prayers, The Vagrants, and Gold Boy, Emerald Girl—and the memoir Dear Friend, from My Life I Write to You in Your Life. She is the recipient of many awards, including a PEN/Hemingway Award, a PEN/Jean Stein Book Award, a MacArthur Foundation fellowship, and a Windham-Campbell Prize, and was featured in The New Yorker’s 20 Under 40 fiction issue. Her work has appeared in The New Yorker, A Public Space, The Best American Short Stories, and The O. Henry Prize Stories, among other publications. She teaches at Princeton University and lives in Princeton, New Jersey. 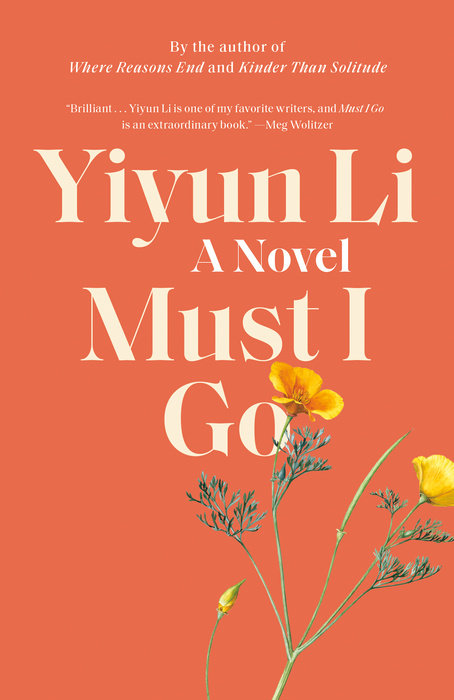