How are young women supposed to see each other clearly when they can't even see themselves? This razor-sharp novel “perfectly captures [the] power dynamics and identity issues that . . . women are forced to face.”—Marie Claire (Best Books of the Year)

Fiona and Liv are seniors at Buchanan College, a small liberal arts school in rural Pennsylvania. Fiona, who is still struggling emotionally after the death of her younger sister, is spending her final college year sleeping with abrasive men she meets in bars. Liv is happily coupled and on the fast track to marriage with an all-American frat boy. Both of their journeys, and their friendship, will be derailed by the relationships they develop with Oliver Ash, a ruggedly good-looking visiting literature professor whose first novel was published to great success when he was twenty-six.

But now Oliver is in his early forties, with thinning hair and a checkered past, including talk of a relationship with an underage woman—a former student—at a previous teaching job. Meanwhile, Oliver’s wife, Simone, is pursuing an academic research project in Berlin, raising their five-year-old son, dealing with her husband’s absence, and wondering if their marriage is beyond repair.

This sly, stunning, wise-beyond-its-years novel is told from the perspectives of the three women and showcases Mandy Berman’s talent for exploring the complexities of desire, friendship, identity, and power dynamics in the contemporary moment.

Praise for The Learning Curve

“Readers expecting a typical love triangle won’t find one. Instead, Berman delivers a thorough and incredibly timely investigation into relationship power imbalances that’s sure to start a lot of conversations.”—The Millions

“Fiona and Liv are two best friends who became inseparable after Fiona experienced a family tragedy. Senior year of college, their lives are headed in different directions, and their differences are only highlighted by the sudden arrival of famed writer and controversial figure Oliver Ash. It’s not what you think—at least, not entirely. This novel, through different perspectives, explores loss, grief, sex, friendship, power dynamics, and much more.”—Betches

“You win some, you learn some. The Learning Curve by Mandy Berman follows two roommates who develop relationships with a visiting professor with a questionable past. Spoiler: things get complicated.”—The Skimm

An excerpt from The Learning Curve

Fiona drank from her bottle of Diet Coke diluted with Smirnoff and skipped ahead of her roommates when she saw the old train tracks. Already the bottle was almost empty. She finished the last gulp and chucked it in the overgrown weeds next to the out-of-service tracks. She did a cartwheel, a roundoff. She hopscotched between the rails, singing to herself—that Sleater-Kinney song Lula always blasted when they were getting ready, the last song that was in her head—as she heard the chattering of the girls somewhere behind her. She turned when the voices got close.

“Play with me!” Fiona called to them.

They laughed gamely, humored her for a minute, Lula lighting a cigarette, Marley sipping from her own soda bottle, Liv standing in silence with her arms crossed while Fiona spun, flipped, skipped. When Lula was done smoking, she crushed the butt into the ground and made for the sidewalk. Truckstop was a few more blocks that way. Marley stood and followed. Only Liv waited.

Fiona did more cartwheels. Her face felt delectably warm, her body as light and bright as if sunshine had been pumped directly into it. She looked up, dizzied, to see that Liv had also walked ahead. She ran, out of breath, toward her friend. “My baby loves me, I’m so hungry!” She sang loudly into Liv’s ear. “Hunger makes me a modern girl!”

“Fiona, stop it,” Liv said, turning her head away from the singing. She looked down at Fiona’s empty hands. “You finished that drink already?” She said this less like a question and more like an expectation.

There it was: that air of judgment had been emanating off Liv all month like a bad smell. As if getting a boyfriend this summer suddenly made her the most virtuous of them all. But instead of delving into the shame, Fiona felt it sweetly rolling off her as if she were a duck emerging from the water.

“It’s Saturday night, Livvy Loo,” she said, kissing her friend on the cheek. She ran ahead to Marley and Lula, knowing that Liv was too afraid to walk in these parts of town alone, and would quickly be forced to follow.

Buchanan College, which came in at number nineteen on the 2008 U.S. News & World Report list of Best Liberal Arts Colleges, was in a small city in central Pennsylvania with a motley population. Besides the college community—rich liberal arts kids, the dippy professors and their mildly rebellious offspring—there was a healthy mix of townies, Amish people, working-class families, gang members, meth heads, artists who couldn’t afford Philadelphia, and then, in the suburbs just outside, staunch, often religious conservatives in their gated communities. Truckstop, in a more desolate area of town—about a fifteen-minute walk from campus and ten minutes from their house—hosted an array of these groups on any given night, meaning the atmosphere was never dull. Sorority girls bought low-grade cocaine and snorted it with the dealers in the bathrooms, the floors slick from leaky plumbing, both parties leaving behind tracks of mud from the dirt-crusted soles of their high heels and their Timberlands. Lacrosse players took townies home, got them pregnant, paid for their abortions. Most recently, the quarterback of the football team, a celebrity on campus for bringing the once terrible team to more victorious seasons than they’d had in decades, had drunkenly failed to leave a tip on a pitcher of Bud Light for himself and his teammates; the bartender, all yellow teeth and shifty eyes, called the quarterback a racial slur under his breath, and a white teammate heard it and punched the bartender in the nose so hard that the crunch of his bones stopped the bar cold. Rumor spread that blood splattered directly into the pitcher, and the teammate had poured the bloody beer straight down his gullet on his way to being thrown out.

Truckstop was surprisingly hard on IDs, and there was always an unsmiling bouncer standing out front who looked more fit for a dance club than for the sticky dive bar inside. What a privilege to all be twenty-one, finally! To not have to hold breaths as Fiona, who had had her birthday in July, pulled out another fake ID to be inevitably taken from her. At some point last spring, Marley, Lula, and Liv had started playing rock-paper-scissors over who would have to accompany Fiona to a frat or loft party, lousy with underclassmen, while the other two stayed at the bar. It wasn’t a nice bar—none of them believed otherwise—but it was a bar, which kept away the pimply eighteen-year-old pledges, the freshmen field hockey players who already thought they were such hot shit, and that in itself was a privilege.

Inside, they ordered their five-dollar vodka tonics, which the bartender, muscle-T’d and tribal-tattooed, handed to them in plastic cups. Lula put her card down, and told the bartender to keep the tab open.

“To senior year!” Fiona said, as if the others might forget that she was a semester behind them.

“To senior year,” they all said back, and every time she was grateful for their kindness in not clarifying the truth.

Mandy Berman is the author of Perennials and The Learning Curve. Her writing has been published in The New York Times, Time, and Poets & Writers. She teaches creative writing at Montclair State University and Manhattanville College, and lives in Brooklyn. 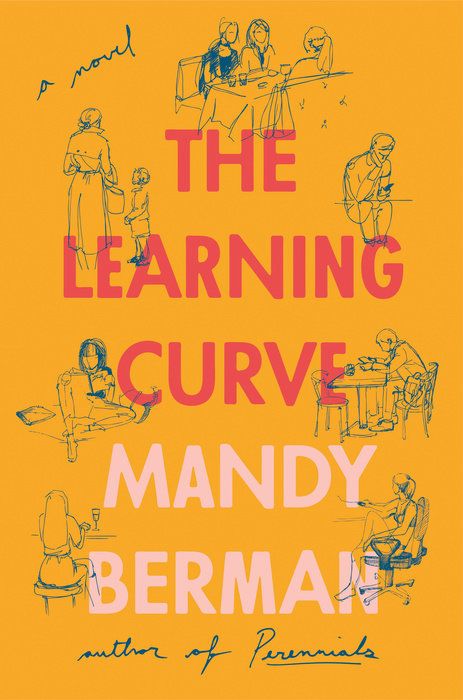