NEW YORK TIMES BESTSELLER • The bestselling author of Morning Star returns to the Red Rising universe with the thrilling sequel to Iron Gold.

“Brown’s plots are like a depth charge of nitromethane dropped in a bucket of gasoline. His pacing is 100% him standing over it all with a lit match and a smile, waiting for us to dare him to drop it.”—NPR (Best Books of the Year)

A decade ago Darrow led a revolution, and laid the foundations for a new world. Now he’s an outlaw.

Cast out of the very Republic he founded, with half his fleet destroyed, he wages a rogue war on Mercury. Outnumbered and outgunned, is he still the hero who broke the chains? Or will he become the very evil he fought to destroy?

In his darkening shadow, a new hero rises.

Lysander au Lune, the displaced heir to the old empire, has returned to bridge the divide between the Golds of the Rim and Core. If united, their combined might may prove fatal to the fledgling Republic.

On Luna, the embattled Sovereign of the Republic, Virginia au Augustus, fights to preserve her precious demokracy and her exiled husband. But one may cost her the other, and her son is not yet returned.

Abducted by enemy agents, Pax au Augustus must trust in a Gray thief, Ephraim, for his salvation.

Far across the void, Lyria, a Red refugee accused of treason, makes a desperate bid for freedom with the help of two unlikely new allies.

Fear dims the hopes of the Rising, and as power is seized, lost, and reclaimed, the worlds spin on and on toward a new Dark Age.

An excerpt from Dark Age

“Citizens of the Solar Republic, this is your Sovereign.”

I stare half blind into a firing squad of fly-eyed cameras. Out the viewport behind my stage, battle stations and ships of war float be­yond the upper atmosphere of Luna.

“On Friday evening last, the third day of the Mensis Martius, I re­ceived a brief indicating that a large-scale Society military operation was under way in the orbit of Mercury. The largest in materiel and man­power since the Battle of Mars, five long years ago.

“We are responsible for this crisis. Lured by the false promises of an enemy plenipotentiary, we allowed our resolve to weaken. We allowed ourselves to believe in the better virtues of our enemy, and that peace was possible with tyrants.

“That lie, seductive though it was, has been exposed as a cruel machi­nation of statecraft designed, perpetrated, and executed by the newly appointed Dictator of the Society remnant, Atalantia au Grimmus—daughter of the Ash Lord. Under her spell, we compromised with the agents of tyranny. We turned on our greatest general, the sword who broke the chains of bondage, and demanded he accept a peace he knew to be a lie.

“When he did not, we cried Traitor! Tyrant! Warmonger! In fear of him, we recalled the Home Guard elements of the White Fleet from Mercury back to Luna. We left Imperator Aquarii at half strength, ex­posed, vulnerable. Now, her fleet, the fleet which freed all our homes, floats in ruins. Two hundred of your ships of war destroyed. Thousands of your sailors killed. Millions of your brothers and sisters marooned upon a hostile sphere. Quadrillions of your wealth squandered. Not by virtue of enemy arms, but by the squabbling of your Senate.

“I have heard it said in these last months, in the halls of the New Forum, on the streets of Hyperion, on the news channels across our Republic, that we should abandon these sons and daughters of liberty, these Free Legions. I have heard them called, in public, without shame, ‘the Lost Legions.’ Written off by you, despite the courage they have summoned, the endurance they have shown, the horrors they have suf­fered for you. Written off because we fear to part with our ships will in­vite invasion of our homeworlds. Because we fear to once again see Society iron over our skies. Because we fear to risk the comforts and freedoms the men and women of the Free Legions purchased for us with their blood . . .

“I will tell you what I fear. I fear time has diluted our dream! I fear that in our comfort, we believe liberty to be self-fulfilling!” I lean for­ward. “I fear that the meekness of our resolve, the bickering and backbit­ing on which we have so decadently glutted ourselves, will rob us of the unity of will that moved the world forward to a fairer place, where re­spect for justice and freedom has found a foothold for the first time in a millennium.

“I fear that in this disunity we will sink back into the hideous epoch from which we escaped, and that the new dark age will be crueler, more sinister, and more protracted by the malice which we have awoken in our enemies.

“I call upon you, the People of the Republic, to stand united. To be­seech your senators to reject fear. To reject this torpor of self-interest. To not quiver in primal trepidation at the thought of invasion, to not let your senators hoard your wealth for themselves and hide behind your ships of war, but to summon the more wrathful angels of their spirits and send forth the might of the Republic to scourge the engines of tyranny and oppression from the Mercurian sky and rescue our Free Legions.”

At that moment, three hundred eighty-four thousand kilometers from my heart, in orbit one thousand kilometers above the wayward continent of South Pacifica, projectiles skinned with Sun Industries stealth polymer race into the void at 320,000 kilometers per hour to­ward Mercury, ferrying not death, but supplies, radiation medicine, ma­chines of war, and, if my husband is alive, a message of hope.

You have not been abandoned. I will come for you.
Until then, endure, my love. Endure.

A graveyard of Republic warships floats in the shadow of Mercury.

Of the triumphant White Fleet that liberated Luna, Earth, and Mars, nothing remains but twisted shards and blackened hollows. Shattered by the might of the Ash Armada, the broken ships spin in orbit around the planet they liberated only months before. No longer filled with Martian sailors and legionnaires loyal to Eo’s dream, their cold halls are naked to vacuum and populated only by the dead.

This is the last laugh of the Ash Lord, and the debut of his heir.

While I burned the old warlord to death in his bed on Venus with Apollonius and Sevro, his daughter Atalantia stepped out from his shadow to take up his office of Dictator. She slipped the greater part of their armada away from Venus and used the sun’s sensor-distorting ra­diation to ambush the White Fleet in orbit over Mercury.

Orion, my fleet’s commander and the greatest naval tactician in the Republic, never saw them coming. It was a massacre, and I was three weeks too late to stop it. The frantic Mayday calls of my friends tortured me as I crossed the void, slipping farther and farther away from my son and wife toward bedlam.

The White Fleet may be gone, but the Free Legions they ferried to Mercury are not dead yet. Soon I will join them on the surface of Mer­cury, but first I have work to do.

It would be easier with Sevro. Everything violent is.

My breath rasps in my vacuum-proof suit as I traverse the graveyard. My magnetic boots land silently along the broken spine of a Republic dreadnought, and I peer into a great fissure in the hull to check on the progress of my lancer. The wound in the hull is thirty decks deep. Jetsam floats in the darkness—bits of metal, mattresses, coffeepots, frozen globes of machine fluid, and severed limbs. No sign of Alexandar.

The rigid corpse of a sailor in a mechanic’s kit drifts upward feet-first. His legs have been congealed into a single crooked stump from the heat of a particle blast. His mouth is locked in a silent scream, as if to ask, “Where were you when the enemy came? Where was the Reaper I swore to follow?”

He was deceived by his enemies, by his allies, by himself.

While the Republic Senate fooled itself into believing peace could be made with fascist warlords, I pretended killing the Ash Lord would end war in our time. That I held the key to unlocking a future where I could put down the slingBlade and return to my child and wife to be a father and a husband. My desperation let me believe that lie. The Senate’s na­ïveté let them believe Atalantia’s. But I know the truth now.

War is our time. Sevro thought he could escape it. I thought I could end it. But our enemy is like the Hydra. Cut off one head, two more sprout. They will not sue for peace. They will not surrender. Their heart must be excised, their will to fight ground to the finest dust.

Only then will there be peace.

Lights flicker in the chasm beneath my feet. Several minutes later, a Gold in an EVA suit drifts upward to set down with me on the hull. For fear of enemy sensors, he puts his faceplate to mine to give his sound waves a medium.

“Reactor is primed and ready for necromancy.”

Alexandar is a killer. He has proven himself the worthy heir to the legacy of his grandfather Lorn au Arcos. And I have begun to wonder if he will inherit my burden. He alone held back the tide atop the Ash Lord’s spire when Thraxa, Sevro, and I had been knocked to our knees. It woke the hunger in him. Now, he craves revenge on Atalantia for the murder of our fleet.

I miss that purity of purpose.

What was it that Lorn said again? “The old rage in colder ways, for they alone decide how to spend the young.”

How many more must I spend? What is Alexandar’s life worth? What is mine worth? As if to find the answer, I glance to my right. Past the hull of the drifting dreadnought, the eastern rim of Mercury throbs like a molten scythe.

Pierce Brown is the New York Times bestselling author of Red Rising, Golden Son, and Morning Star. While trying to make it as a writer, Brown worked as a manager of social media at a startup tech company, toiled as a peon on the Disney lot at ABC Studios, did his time as an NBC page, and gave sleep deprivation a new meaning during his stint as an aide on a U.S. Senate campaign. He lives in Los Angeles, where he is at work on his next novel.

To inquire about booking Pierce Brown for a speaking engagement, please contact the Penguin Random House Speakers Bureau at speakers@penguinrandomhouse.com. 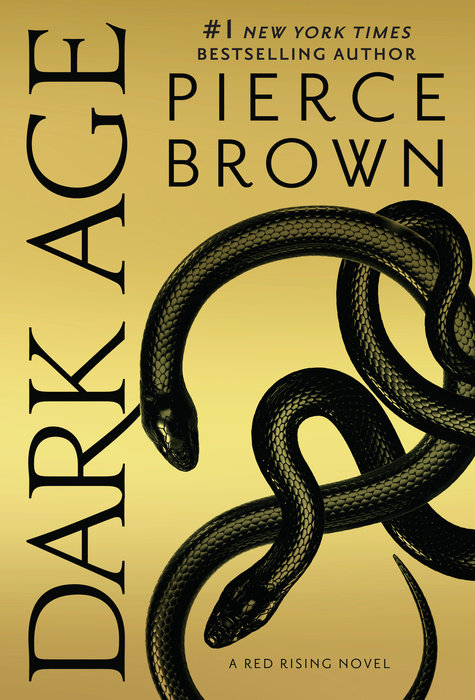