The bold and boundlessly original debut novel from the Oscar®-winning screenwriter of Being John Malkovich, Adaptation, Eternal Sunshine of the Spotless Mind, and Synecdoche, New York.

B. Rosenberger Rosenberg, neurotic and underappreciated film critic (failed academic, filmmaker, paramour, shoe salesman who sleeps in a sock drawer), stumbles upon a hitherto unseen film made by an enigmatic outsider—a film he’s convinced will change his career trajectory and rock the world of cinema to its core. His hands on what is possibly the greatest movie ever made—a three-month-long stop-motion masterpiece that took its reclusive auteur ninety years to complete—B. knows that it is his mission to show it to the rest of humanity. The only problem: The film is destroyed, leaving him the sole witness to its inadvertently ephemeral genius.

All that’s left of this work of art is a single frame from which B. must somehow attempt to recall the film that just might be the last great hope of civilization. Thus begins a mind-boggling journey through the hilarious nightmarescape of a psyche as lushly Kafkaesque as it is atrophied by the relentless spew of Twitter. Desperate to impose order on an increasingly nonsensical existence, trapped in a self-imposed prison of aspirational victimhood and degeneratively inclusive language, B. scrambles to re-create the lost masterwork while attempting to keep pace with an ever-fracturing culture of “likes” and arbitrary denunciations that are simultaneously his bête noire and his raison d’être.

A searing indictment of the modern world, Antkind is a richly layered meditation on art, time, memory, identity, comedy, and the very nature of existence itself—the grain of truth at the heart of every joke.

My beard is a wonder. It is the beard of Whitman, of Rasputin, of Darwin, yet it is uniquely mine. It’s a salt-­and-pepper, steel-­wool, cotton-­candy confection, much too long, wispy, and unruly to be fashionable. And it is this, its very unfashionability, that makes the strongest statement. It says, I don’t care a whit (a Whitman!) about fashion. I don’t care about attractiveness. This beard is too big for my narrow face. This beard is too wide. This beard is too bottom-­heavy for my bald head. It is off-­putting. So if you come to me, you come to me on my terms. As I’ve been bearded thusly for three decades now, I like to think that my beard has contributed to the resurgence of beardedness, but in truth, the beards of today are a different animal, most so fastidious they require more grooming than would a simple clean shave. Or if they are full, they are full on conventionally handsome faces, the faces of faux woodsmen, the faces of home brewers of beer. The ladies like this look, these urban swells, men in masculine drag. Mine is not that. Mine is defiantly heterosexual, unkempt, rabbinical, intellectual, revolutionary. It lets you know I am not interested in fashion, that I am eccentric, that I am serious. It affords me the opportunity to judge you on your judgment of me. Do you shun me? You are shallow. Do you mock me? You are a philistine. Are you repulsed? You are . . . conventional.

That it conceals a port-­wine stain stretching from my upper lip to my sternum is tertiary, secondary at most. This beard is my calling card. It is the thing that makes me memorable in a sea of sameness. It is the feature in concert with my owlish wire-­rim glasses, my hawkish nose, my sunken blackbird eyes, and my bald-­eagle pate that makes me caricaturable, both as a bird and as a human. Several framed examples from various small but prestigious film criticism publications (I refuse to be photographed for philosophical, ethical, personal, and scheduling reasons) adorn the wall of my home office. My favorite is an example of what is commonly known as the inversion illusion. When hung upside down, I appear to be a Caucasian Don King. As an inveterate boxing enthusiast and scholar, I am amused by this visual pun and indeed used the inverted version of this illustration as the author photo for my book The Lost Religion of Masculinity: Joyce Carol Oates, George Plimpton, Norman Mailer, A. J. Liebling, and the Sometimes Combative History of the Literature of Boxing, the Sweet Science, and Why. The uncanny thing is that the Don King illusion works in reality as well. Many’s the time, after I perform sirsasana in yoga class, that the hens circle, clucking that I look just like that “awful boxing man.” It’s their way of flirting, I imagine, these middle-­aged, frivolous creatures, who traipse, yoga mat rolled under arm or in shoulder-­holster, announcing their spiritual discipline to an uncaring world—­from yoga to lunch to shopping to loveless marriage bed. But I am there only for the workout. I don’t wear a special outfit or listen to the mishmash Eastern religion sermon the instructor blathers beforehand. I don’t even wear shorts and a T-­shirt. Gray dress pants and a white button-­down shirt for me. Belt. Black oxfords on feet. Wallet packed thickly into rear right pocket. I believe this makes my point. I am not a sheep. I am not a faddist. It’s the same outfit I wear if on some odd occasion I find myself riding a bicycle in the park for relaxation. No spandex suit with logos all over it for me. I don’t need anyone thinking I am a serious bicycle rider. I don’t need anyone thinking anything of me. I am riding a bike. That is it. If you want to think something about that, have at it, but I don’t care. I will admit that my girlfriend is the one who has gotten me on a bike and into the yoga classroom. She is a well-­known TV actress, famous for her role as a wholesome but sexy mom in a 1990s sitcom and many television movies. You would certainly know who she is. You might say I, as an older, intellectual writer, am not “in her league,” but you’d be mistaken. Certainly when we met at a book signing of my prestigious small-press critical biography of—­

Something (deer?) dashes in front of my car. Wait! Are there deer here? I feel like I’ve read that there are deer here. I need to look it up. The ones with fangs? Are there deer with fangs? I think there is such a thing—­a deer with fangs—­but I don’t know if I’ve imagined it, and if I haven’t, I don’t know why I associate them with Florida. I need to look it up when I arrive. Whatever it was, it is long gone.

I am driving through blackness toward St. Augustine. My mind has wandered into the beard monologue, as it so often does on long car trips. Trips of any kind. I’ve delivered it at book signings, at a lecture on Jean-­Luc Godard at the 92nd Street Y Student Residence Dining Hall Overflow Room. People seem to enjoy it. I don’t care that they do, but they do. I’m just sharing that piece of trivia because it’s true. Truth is my master in all things, if I can be said to have a master, which I cannot. Ninety degrees, according to the outside temperature gauge on my car. Eighty-nine percent humidity, according to the perspiratory sheen on my forehead (at Harvard, I was affectionately known as the Human Hygrometer). A storm of bugs in the headlights, slapping the windshield, smeared by my wipers. My semiprofessional guess is a swarm of the aptly named lovebug—­Plecia nearctica—­the honeymoon fly, the double-­headed bug, so called because they fly conjoined, even after the mating is complete. It is this kind of postcoital cuddling I find so enjoyable with my African American girlfriend. You would recognize her name. If the two of us could fly through the Florida night together thusly, I would in a second agree to it, even at the risk of splattering against some giant’s windshield. I find myself momentarily lost in that sensual and fatal scenario. An audible splat wakes me from this diversional road trip reverie, and I see that a particularly large and bizarre insect has smashed into the glass, smack in the center of what I estimate is the northwest quadrant of the windshield.

The highway is empty, the nothingness on either side of me interrupted by an occasional fluorescent fast-­food joint, open but without customers. No cars in the parking lots. The names are unfamiliar: Slammy’s. The Jack Knife. Mick Burger. Something sinister about these places isolated in the middle of nothing. Who are they feeding? How do they get their supplies? Do frozen-­patty trucks come here from some Slammy’s warehouse somewhere? Hard to imagine. Probably a mistake to drive here from New York. I thought it would be meditative, would give me time to think about the book, about Marla, about Daisy, about Grace, about how far I seem to be from anything I’d ever envisioned for myself. How does that happen? Can I even know who I was before the world got its hands on me and turned me against myself into this . . . thing?

Charlie Kaufman is the screenwriter of many films, such as Anomalisa; Synecdoche, New York; Adaptation; Eternal Sunshine of the Spotless Mind; and Being John Malkovich. He won an Academy Award for his work on Eternal Sunshine of the Spotless Mind and has been nominated three additional times. Kaufman is also a three-time BAFTA winner for screenwriting, and he has been nominated for three Golden Globe Awards, among many other film honors. 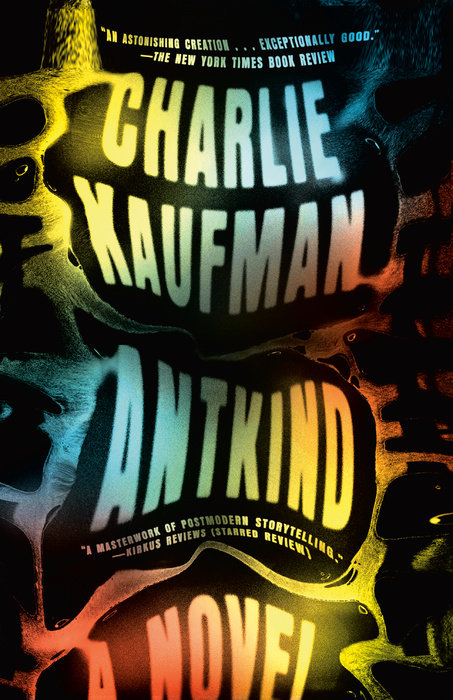