A Fight for Sacred Land in the American West

Oak Flat is a serene high-elevation mesa that sits above the southeastern Arizona desert, fifteen miles to the west of the San Carlos Apache Indian Reservation. For the San Carlos tribe, Oak Flat is a holy place, an ancient burial ground and religious site where Apache girls celebrate the coming-of-age ritual known as the Sunrise Ceremony. In 1995, a massive untapped copper reserve was discovered nearby. A decade later, a law was passed transferring the area to a private company, whose planned copper mine will wipe Oak Flat off the map—sending its natural springs, petroglyph-covered rocks, and old-growth trees tumbling into a void.

Redniss’s deep reporting and haunting artwork anchor this mesmerizing human narrative. Oak Flat tells the story of a race-against-time struggle for a swath of American land, which pits one of the poorest communities in the United States against the federal government and two of the world’s largest mining conglomerates. The book follows the fortunes of two families with profound connections to the contested site: the Nosies, an Apache family whose teenage daughter is an activist and leader in the Oak Flat fight, and the Gorhams, a mining family whose patriarch was a sheriff in the lawless early days of Arizona statehood.

The still-unresolved Oak Flat conflict is ripped from today’s headlines, but its story resonates with foundational American themes: the saga of westward expansion, the resistance and resilience of Native peoples, and the efforts of profiteers to control the land and unearth treasure beneath it while the lives of individuals hang in the balance.

An excerpt from Oak Flat

Copper is produced in massive stars and flung out into space as those stars explode.

We look into the night sky; the heavens appear still and quiet. But as you gaze upward, you are a distant witness to cataclysmic violence. Each glittering star is a cauldron of nuclear fusion reactions many light years away. The light we see is the release of energy as the star fuses hydrogen into helium. When a star runs out of hydrogen to fuse, it surrenders to gravity and begins to contract. The star’s core becomes hotter and denser. This heat and pressure spur further nuclear reactions, forming elements of increasingly higher mass. As a large star burns through all the energy it can generate from fusion, its core tightens into a blazingly hot fist of iron.

The star implodes, then rebounds outward, forming a supernova, an explosion bright enough to outshine entire galaxies. The star is dying, collapsing in on itself at velocities of up to 70,000 kilometers per second and spewing dense clouds of hot gas into space at a third of the speed of light, driving a shock wave dozens of light years across. A supernova has the power to forge metallic elements, and as it explodes, it expels these elements into space. In these dense molecular clouds, new stars and planets form.

Some four and a half billion years ago, one of those new stars was our Sun. As cosmic debris orbited the nascent Sun, particles began clumping together, becoming asteroids, planetesimals, and, finally, over millions of years, planets, including Planet Earth.

Young Earth was a seething ball of molten rock and metal. Comets, meteors, and asteroids crashed into the new planet. Eventually, Earth’s surface began to cool and solidify. Water vapor and ice became oceans. Continents collided, were torn asunder, slid past each other, were re-formed. Molten rock known as magma churned under Earth’s surface. Magma that spews from Earth in a volcanic eruption is called lava. Magma can also crystallize underground over hundreds of thousands or even millions of years. Most magmas cool into common granites, but a small percentage concentrates metals to form an ore deposit.

Ore deposits contain coveted minerals, including gold, silver, iron, and copper. Humans have mined these materials for millennia. Today we use mined metals in construction and manufacturing, in medical devices and in agriculture, in power generation and telecommunications. In the twenty-first century, the ore close to Earth’s surface has mostly been harvested, so we dig ever deeper to access what remains.

Lauren Redniss is the author of several works of visual non-fiction and the recipient of a MacArthur Foundation “genius grant.” Her book Thunder & Lightning: Weather Past, Present, Future won the 2016 PEN/E. O. Wilson Literary Science Writing Award. Radioactive: Marie & Pierre Curie, A Tale of Love and Fallout was a finalist for the 2011 National Book Award. She has been a Guggenheim fellow, a fellow at the New America Foundation and the New York Public Library’s Cullman Center for Scholars & Writers, and Artist-in-Residence at the American Museum of Natural History. She teaches at the Parsons School of Design in New York City.

A Fight for Sacred Land in the American West 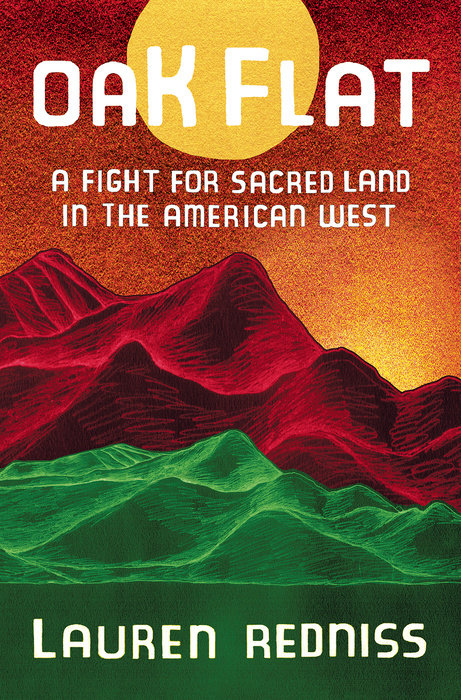