“The poems are marked by his characteristic humor and arise out of small, banal moments, unearthing the extraordinary or uncanny in the everyday.”—The Wall Street Journal

Whale Day brings together more than fifty poems and showcases the deft mixing of the playful and the serious that has made Billy Collins one of our country’s most celebrated and widely read poets. Here are poems that leap with whimsy and imagination, yet stay grounded in the familiar, common things of everyday experience. Collins takes us for a walk with an impossibly ancient dog, discovers the original way to eat a banana, meets an Irish spider, and even invites us to his own funeral. Sensitive to the wonders of being alive as well as the thrill of mortality, Whale Day builds on and amplifies Collins’s reputation as one of America’s most interesting and durable poets.

An excerpt from Whale Day

so I often have to stop and wait

while she examines some roadside weeds

as if she were reading the biography of a famous dog.

And she’s not a pretty sight anymore,

dragging one of her hind legs,

her coat too matted to brush or comb,

and a snout white as a marshmallow.

We usually walk down a disused road

that runs along the edge of a lake,

whose surface trembles in a high wind

and is slow to ice over as the months grow cold.

We don’t walk very far before

she sits down on her worn haunches

and looks up at me with her rheumy eyes.

Then it’s time to carry her back to the car.

Just thinking about the honesty in her eyes,

I realize I should tell you

I guess I was trying to appeal to your sense

of the bizarre, the curiosities of the sideshow.

I mean who really cares about another person’s dog?

Everything else I’ve said is true,

except the part about her being fourteen.

I mean she’s old, but not that old,

and it’s not polite to divulge the true age of a lady.

I was trying to make my way

across a busy street in San Francisco,

while carrying the new anthology of poetry

I’d been flipping through earlier that morning—

with my pot of tea and two pieces of cinnamon toast—

in which I was wedged between James Tate and Bob Dylan

because the poets were arranged old to young, according to age.

I had to avoid a couple of cars,

and dodge a guy with a ski cap on a bicycle

in order to get across the street and enter

one of the city’s many hospitable parks

with their hedges, benches, and shade trees

and often girls on a blanket, a juggler, an old man doing tai-chi.

And that’s where I lay down on the soft grass,

closed my eyes, and after a little while

according to the editor’s wishes,

sliding out of our mothers in order, one after the other,

then ending up pressed together on a shelf

in a corner bookstore, yodeling away in the dark.

A teddy bear in a store window,

waiting to cross a boulevard,

a woman in a café, her red nails

on a man’s nape while she smokes—

what are we to make of all this?

In the church of Saint-Sulpice,

the Virgin holds her baby to her chest

as she stands on the round earth,

appearing to be unaware

of the serpent she is crushing with one foot.

Is this a puzzle I am meant to solve

before the evening bells ring again—

there a child alone on a flowery balcony?

An outdoor table on Rue Cassette

seemed a good enough place to sort things out.

after two milky-green glasses of Pernod,

and I found a link between my notebook

and the soft Parisian sky,

both being almost the same pale shade of blue.

Billy Collins is the author of twelve collections of poetry including The Rain in Portugal, Aimless Love, Horoscopes for the Dead, Ballistics, The Trouble with Poetry, Nine Horses, Sailing Alone Around the Room, Questions About Angels, The Art of Drowning, and Picnic, Lightning. He is also the editor of Poetry 180: A Turning Back to Poetry, 180 More: Extraordinary Poems for Every Day, and Bright Wings: An Illustrated Anthology of Poems About Birds. A former Distinguished Professor at Lehman College of the City University of New York, Collins served as Poet Laureate of the United States from 2001 to 2003 and as New York State Poet from 2004 to 2006. In 2016 he was inducted into the American Academy of Arts and Letters. He lives in Florida with his wife Suzannah. 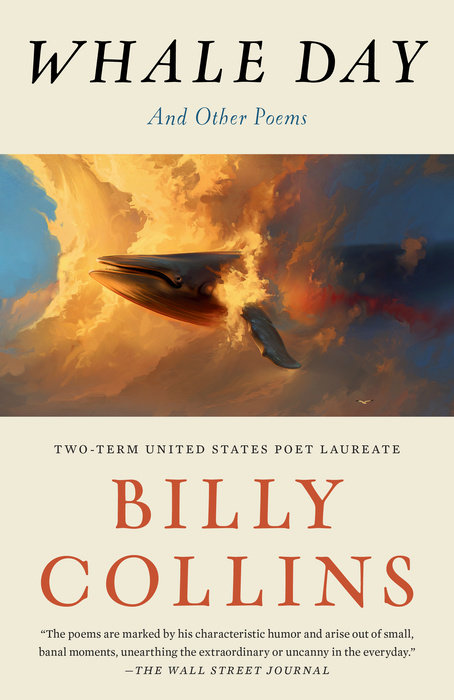