NEW YORK TIMES BESTSELLER • A renowned journalist and legal commentator exposes the unchecked power of the prosecutor as a driving force in America’s mass incarceration crisis—and charts a way out.

“An important, thoughtful, and thorough examination of criminal justice in America that speaks directly to how we reduce mass incarceration.”—Bryan Stevenson, author of Just Mercy

“This harrowing, often enraging book is a hopeful one, as well, profiling innovative new approaches and the frontline advocates who champion them.”—Matthew Desmond, author of Evicted

The American criminal justice system is supposed to be a contest between two equal adversaries, the prosecution and the defense, with judges ensuring a fair fight. That image of the law does not match the reality in the courtroom, however. Much of the time, it is prosecutors more than judges who control the outcome of a case, from choosing the charge to setting bail to determining the plea bargain. They often decide who goes free and who goes to prison, even who lives and who dies. In Charged, Emily Bazelon reveals how this kind of unchecked power is the underreported cause of enormous injustice—and the missing piece in the mass incarceration puzzle.

Charged follows the story of two young people caught up in the criminal justice system: Kevin, a twenty-year-old in Brooklyn who picked up his friend’s gun as the cops burst in and was charged with a serious violent felony, and Noura, a teenage girl in Memphis indicted for the murder of her mother. Bazelon tracks both cases—from arrest and charging to trial and sentencing—and, with her trademark blend of deeply reported narrative, legal analysis, and investigative journalism, illustrates just how criminal prosecutions can go wrong and, more important, why they don’t have to.

Bazelon also details the second chances they prosecutors can extend, if they choose, to Kevin and Noura and so many others. She follows a wave of reform-minded D.A.s who have been elected in some of our biggest cities, as well as in rural areas in every region of the country, put in office to do nothing less than reinvent how their job is done. If they succeed, they can point the country toward a different and profoundly better future.

An excerpt from Charged

Prosecution in America is at a crossroads. It arrived there because, over the last 40 years, the power of American prosecutors grew to an alarming degree. They amassed more power than our system was designed for. And they mostly used it to put more people in prison, contributing to the scourge of mass incarceration, which continues to rip apart poor communities, especially if they are mostly black or brown.

The unfettered power of prosecutors is the missing piece for explaining how the rate of incarceration in the United States has quintupled since the 1980s, to almost 2.2 million. Our level of imprisonment is five to 10 times higher than that of other liberal democracies—nine times Germany’s and seven times France’s. There’s more: When the system misfires in the worst way possible, by convicting an innocent person, a prosecutor’s errors (or less frequently, willful misconduct) often account for the breakdown, at least in part. And when black defendants are punished more severely than white defendants for similar crimes, the choices of prosecutors are largely to blame. Though they’re not the only ones at fault, their decisions are the ones that matter most of all.

Jail and prison have a role to play in our society. Some people do scary things—not that many relatively speaking, but some—and a subset cause unconscionable harm. The overuse of incarceration, however, has become a source of tremendous suffering in its own right. Over-incarceration, lifetime consequences, government overreach, racial disparity—these are American disasters, adding up to one of the most pressing problems of our time.. They have not been fixed, not by any means. In many places in the country, they haven’t even been addressed. Our justice system regularly operates as a system of injustice, grinding out unwarranted and counterproductive levels of punishment. This is, in large part, because of the outsize role prosecutors now play. “The power imbalance blew my mind frankly: I couldn’t figure out for the life of me how prosecutors had so much power with so little accountability,” said Angela J. Davis, a law professor who was formerly the director of the public defender service in Washington, D.C., and the author of a 2007 book about prosecutors. “They were allowed to do things, some unconstitutional, some perfectly legal but with horrific results that most human beings would think were unfair. I thought, How can this be?”

We often think of prosecutors and defense lawyers as points of a triangle on the same plane, with the judge poised above them. Equal contest, level playing field, neutral arbiter, etc. That image is entirely out of date. That’s not how the system works anymore. Much of the time, prosecutors, more than judges, control the outcome of a case. They answer to no one else and make most of the key decisions in a case, from choosing the charge to making the bail demand to determining the plea bargain. The officer in uniform and the judge in robes are our indelible images of criminal justice. No one needs to explain the power they wield. Yet it is Caryn Teitelman, in her pantsuit and ballet flats, who today embodies the might and majesty of the state. “It’s all about discretion,” says Eric Gonzalez, the district attorney of Brooklyn and Teitelman’s boss. “Do you authorize the arrest, request bail, argue to keep them in jail or let them out, go all out on the charges or take a plea bargain? Prosecutors decide, especially, who gets a second chance.”

Here’s the thing: prosecutors also hold the key to change. They can protect against convicting the innocent. They can guard against racial bias. They can curtail mass incarceration. Some prosecutors are themselves beginning to say the system should radically change. They’re speaking as agents of law enforcement who see ensuring fairness as integral to public safety, because people who have faith in the criminal justice system are more likely to help the police solve crimes and to testify as witnesses in court. In a democracy, people tend to obey and help uphold the law when they believe it is fair. It’s an understanding that’s fundamental to the legitimacy of state power.

After decades of intransigence, some prosecutors are moving toward fairness and mercy, even leading the way. Inspired by a variety of forces—civil rights, a pragmatic kind of libertarian politics, the campaigns against violence and racism of Black Lives Matter—a movement to elect a new kind of district attorney is underway. This movement is young, but it’s fast growing. And its leaders recognize a game-changing fact: The power of the D.A. makes him or her the actor in the system — the only actor — who can fix what’s broken without changing a single law.

Prosecutors are not solely responsible for the state of the criminal justice system, of course. They necessarily respond to the cues of judges, legislators and other elected officials, and the priorities of the police, who are their closest partners. The quality of defense lawyers, especially those who represent the poor, matters a great deal for the quality of justice, and adequate funding for public defenders is an absolute necessity. When prosecutors make decisions about which offenders to charge to the max and which to spare, they need good defense attorneys with the time, resources, and heart to tell their clients’ stories and make the case for mercy. But when it comes to broader policy shifts, like ending criminal charges for marijuana or reducing punishment in general, prosecutors truly hold the power. They offer a short cut to persuading legislators, with all of their competing priorities and allegiances, to shorten sentences and cut the fat out of the criminal code. It’s still important to change the laws, but we can stop caging people needlessly right now if prosecutors would only choose to open the locks.

Because we, the people, elect state prosecutors, their power is our power. We can shape—and reshape—the choices they make. American criminal justice reformers have thoroughly absorbed this lesson: If you want to transform the system, take over the D.A.’s office. In the last few years, for the first time, a wave of reform-minded prosecutors has won election and taken office.

This group includes Republicans as well as Democrats in red counties and blue cities. Most have been in office for only a year or two, and their playbook for making change remains a work in progress. Like all politicians—and human beings—the newly elected prosecutors aren’t perfect. Some will inevitably prove too cautious. Others will be bruised by conflicts they can’t control. A few will turn out to be total disappointments. The newly elected D.A.s are also a small number relative to the nearly 2,500 prosecutors who hold elected office nationwide.

But they now hold the reins of law enforcement in some of our biggest cities, as well as a scattering of rural areas, in every region of the country. And they were put in office to do nothing less than reinvent how their job is done. If they do what they were elected to do, they can point the country toward a different and profoundly better future, by rewriting the rules that have crushed so many people and that govern all of our lives. There’s good reason to think the number of people in prison and jail could be safely reduced by half or even three quarters—and that in a century or two, our current embrace of mass incarceration will seem as sinful as slavery does now.

In the national conversation about our exploding prison system, we’ve just begun to grapple with what prosecutors do and we still don’t understand deeply who they are. On TV serials and in the press, they’re portrayed as calculating politicians, white-hat heroes, or rote functionaries. These are not fair or full portraits. Prosecutors have always been obligated to pursue a dual mission: seek convictions and act as ministers of justice. The roles are “obviously unharmonious,” Supreme Court Justice Thurgood Marshall once wrote, a phrase that captures the difficulty inherent in playing both at once. But mastering that duality is fundamental to a prosecutor’s professional and ethical calling. Good prosecutors know it and live it and teach it. The prosecutor “is in a peculiar and very definite sense the servant of the law, the twofold aim of which is that guilt shall not escape or innocence suffer,” Supreme Court Justice George Sutherland wrote in 1935. “The citizen’s safety lies in the prosecutor who tempers zeal with human kindness,” Justice Robert Jackson added five years later. In other words, the prosecutor’s job is not to exact the greatest possible punishment. It is not to win at all costs. It’s to offer mercy in equal measure to justice.

Emily Bazelon is a staff  writer at The New York Times Magazine, the Truman Capote Fellow for Creative Writing and Law, and a lecturer at Yale Law School. Her previous book is the national bestseller  Sticks and Stones: Defeating the Culture of Bullying and Rediscovering the Power of Character and Empathy. She’s also a co-host of the  Slate Political Gabfest, a popular weekly podcast. Before joining the  Times  Magazine, Bazelon was a writer and editor at  Slate, where she co-founded the women’s section “DoubleX.” She lives in New Haven, Connecticut. 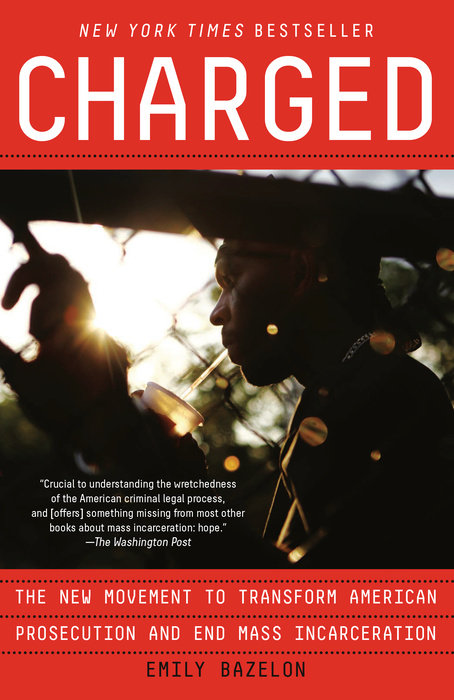