His Life and His Mysterious Death

What can we learn from the stunning rise and mysterious death of the ancient world’s greatest conqueror? An acclaimed biographer reconstructs the life of Alexander the Great in this magisterial revisionist portrait.

“[An] infectious sense of narrative momentum . . . Its energy is unflagging, including the verve with which it tackles that teased final mystery about the specific cause of Alexander’s death.”—The Christian Science Monitor

More than two millennia have passed since Alexander the Great built an empire that stretched to every corner of the ancient world, from the backwater kingdom of Macedonia to the Hellenic world, Persia, and ultimately to India—all before his untimely death at age thirty-three. Alexander believed that his empire would stop only when he reached the Pacific Ocean. But stories of both real and legendary events from his life have kept him evergreen in our imaginations with a legacy that has meant something different to every era: in the Middle Ages he became an exemplar of knightly chivalry, he was a star of Renaissance paintings, and by the early twentieth century he’d even come to resemble an English gentleman. But who was he in his own time?

In Alexander the Great, Anthony Everitt judges Alexander’s life against the criteria of his own age and considers all his contradictions. We meet the Macedonian prince who was naturally inquisitive and fascinated by science and exploration, as well as the man who enjoyed the arts and used Homer’s great epic the Iliad as a bible. As his empire grew, Alexander exhibited respect for the traditions of his new subjects and careful judgment in administering rule over his vast territory. But his career also had a dark side. An inveterate conqueror who in his short life built the largest empire up to that point in history, Alexander glorified war and was known to commit acts of remarkable cruelty.

As debate continues about the meaning of his life, Alexander's death remains a  mystery. Did he die of natural causes—felled by a fever—or did his marshals, angered by his tyrannical behavior, kill him? An explanation of his death can lie only in what we know of his life, and Everitt ventures to solve that puzzle, offering an ending to Alexander’s story that has eluded so many for so long.

An excerpt from Alexander the Great

An intelligent and charismatic young man in his midtwenties, he had been king of Macedonia for the past two years. This was no sinecure, for he was surrounded by enemies. On the day in question, he was with his army on campaign; three messengers arrived one after another at his camp, each bearing wonderful news.

The first rider brought a report from his trusty and talented general Parmenion, who had scored a victory against Macedonia’s hereditary foes, the fierce, wild Illyrians. Then came a dispatch from southern Greece, where the Olympic Games were being held. Philip had entered a horse in one of the equestrian events. Only the very wealthy could afford the training and upkeep of two- or four-horse chariots, but financing a competitor in a four-and-a-half-mile horse race was costly enough. Philip’s investment had paid off, for his mount came in first. The publicity would give a shine to his embattled reputation.

But the last messenger arrived from Pella, his capital city. His wife Olympias had given birth to a healthy boy. The official seers or soothsayers said that the arrival of a son timed to coincide with these other successes augured well. When he grew up he would surely be invincible. For his father, there was the prospect of continuing the dynasty.

The infant’s name was to be Alexander.

The baby crown prince faced the prospect of a daunting inheritance. He soon came to understand the realities of life and death as a member of the royal family. Being a clever and observant child, he remembered what he saw, and early lessons set the pattern of his adult attitudes.

Here are some of the things he must have learned.

The rocky and vertiginous geography of Macedon was hostile to good governance. The kingdom lay to the north of Mount Olympus, traditional home of Zeus and the other anthropomorphic divinities of the Hellenic pantheon. Its center was a fertile alluvial plain bordered by the wooded mountains of northern Macedonia. Its coastline was interrupted by the three-fingered peninsula of Chalcidice, which was peppered with Greek trading settlements.

Macedonia was inhabited by unruly tribes which devoted their time and energy to stock-raising and hunting. They regularly moved sheep to and from grazing grounds—the lowlands in winter and the highlands in summer. They paid as little attention as possible to central authority. There was a myriad of villages and very few settled urban communities.

The kingdom had one important raw material in almost limitless amounts—high-quality timber. Trade increased around the Aegean Sea, for travel or transport by sea was easier by far than to go by land. There was growing demand for merchant ships and war galleys and, it followed, for planking and oars. The tall trees of Macedonia were ideal for the purpose, unlike the stunted products of the Greek landscape. Pitch was also exported for caulking boats.

Life, even for despots, was basic. The “father of history,” Herodotus, who flourished in the fifth century b.c., writes of the primitive Macedonian monarchy. His contemporaries would have recognized the simplicity of the royal lifestyle, which had changed little over the centuries. The king lived in a farmhouse with a smoke hole in the roof, and the queen did the cooking. Herodotus, who probably visited Macedonia, commented: “In the old days ruling houses were poor, just like ordinary people.”

Up to Philip’s day and beyond, the monarch adopted an informal way of life. At home he hunted and drank with his masculine Companions, or hetairoi. In the field he fought at the head of his army and was surrounded by a select bodyguard of seven noblemen, the somatophylaxes. His magnificent armor inevitably attracted enemy attacks.

He mingled easily with his subjects and eschewed titles, being addressed only by his given name or “King.” He had to put up with impertinence from the rank and file, just as Agamemnon, commander-in-chief at Troy, was obliged to hear out Homer’s Thersites, a bowlegged and lame troublemaker, whose head was filled “with a store of disorderly words.”

In effect, a king like Philip was not an autocrat but a tribal leader, and his success or failure would largely depend on his performance in war and his magnanimity in peace. It was important that he be generous with personal favors, together with gifts of estates, money, and loot on campaign.

Like Agamemnon, he was wise to consult his senior officers. Philip suited the role very well, ruling with a relaxed sense of humor on the surface and adamantine determination underneath. An anecdote epitomizes his style. At the end of one campaign, he was superintending the sale of prisoners into slavery. His tunic had ridden up, exposing his private parts. One of the prisoners claimed to be a friend of his father and asked for a private word. He was brought forward to the king and whispered in his ear: “Lower your tunic a little, for you are exposing too much of yourself the way you are sitting.” And Philip said, “Let him go free, for I’d forgotten he is a true friend indeed.”

Little is known about a king’s constitutional rights, but it seems that he was appointed by acclamation, at an assembly of citizens or of the army. Capital punishment of a Macedonian had to be endorsed by an assembly. But even if his powers were limited, a canny ruler could almost invariably get his way. The eldest son usually—but by no means always, as we shall see—inherited the throne.

The philosopher Aristotle, whose father was official physician at the Macedonian court, was thinking about Philip when he observed that “kingship . . . is organized on the same basis as aristocracy: [by] merit—either individual virtue, or birth, or distinguished service, or all these together with a capacity for doing things.”

Successive rulers tried again and again, without conspicuous success, to impose their will on their untamable subjects. Then, toward the end of the sixth century b.c., the outside world intervened in the shape of Darius I, absolute lord of the vast, sprawling Persian empire, which stretched from the shores of the eastern Mediterranean to the gates of India, from Egypt to Anatolia. It has been well described as a desert punctuated by oases. There were well-watered plains, often more abundant than today, and arid wastes. Rugged mountain ranges and broad rivers made travel—and for that matter warfare—complicated and challenging.

The empire was founded by Cyrus the Great in the middle of the fifth century b.c. The Persians were originally nomads, and even in their heyday as an imperial power, their rulers were always on the move between one or other of their capital cities, Susa, Persepolis, and Ecbatana. Their great throne halls were versions of the royal traveling tent in stone. Like all nomads, they were enthusiastic horsemen and their mounted archers were ferocious in battle.

It has been estimated that the empire was home to about fifty million inhabitants. They came from a variety of cultures, spoke a medley of languages, and practiced a wide array of religions; wisely, they were governed with a light touch. However, if they rebelled against the central authority, they could only expect fire, rapine, and slaughter. In the last resort, the empire was a military monarchy.

The Great King, as he was usually called, wanted to secure the northwestern corner of his wide domains by establishing an invulnerable frontier, the river Danube. This would entail subjugating Thrace, the large extent of land between the Balkan mountains, the Black Sea, and the Sea of Marmara. On today’s political map, it includes portions of Greece, Bulgaria, and Turkey.

Anthony Everitt, a former visiting professor in the visual and performing arts at Nottingham Trent University, who has written extensively on European culture, is the author of Cicero, Augustus, Hadrian and the Triumph of Rome, The Rise of Rome, and The Rise of Athens. He has as well served as secretary general of the Arts Council of Great Britain. Everitt lives near Colchester, England’s first recorded town, founded by the Romans.

His Life and His Mysterious Death 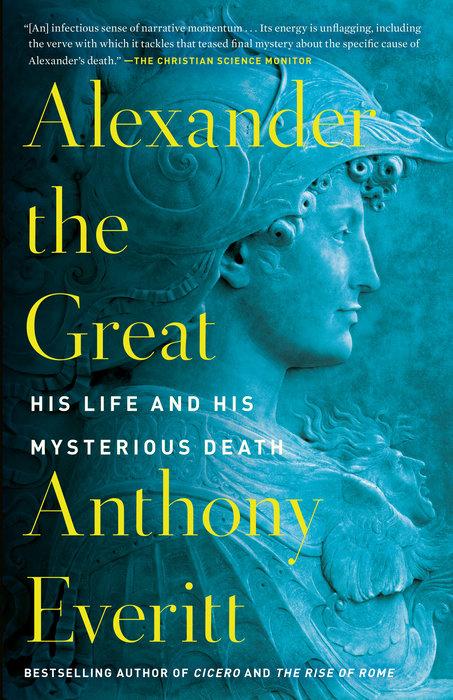