Reacher takes a stroll through a small Wisconsin town and sees a class ring in a pawn shop window: West Point 2005. A tough year to graduate: Iraq, then Afghanistan. The ring is tiny, for a woman, and it has her initials engraved on the inside. Reacher wonders what unlucky circumstance made her give up something she earned over four hard years. He decides to find out. And find the woman. And return her ring. Why not?

So begins a harrowing journey that takes Reacher through the upper Midwest, from a lowlife bar on the sad side of small town to a dirt-blown crossroads in the middle of nowhere, encountering bikers, cops, crooks, muscle, and a missing persons PI who wears a suit and a tie in the Wyoming wilderness.

The deeper Reacher digs, and the more he learns, the more dangerous the terrain becomes. Turns out the ring was just a small link in a far darker chain. Powerful forces are guarding a vast criminal enterprise. Some lines should never be crossed. But then, neither should Reacher.

Praise for The Midnight Line

“A timely, suspenseful, morally complex thriller, one of the best I’ve read this year . . . Child weaves in a passionately told history of opioids in American life. . . . Child’s outrage over it is only just barely contained.”—The Philadelphia Inquirer

“A perfect example of Lee Child’s talent . . . Lee Child is the master of plotting. . . . This is Child’s most emotional book to date. . . . This is not just a good story; it is a story with a purpose and a message.”—Huffington Post

“I just read the new Jack Reacher novel by Lee Child. . . . It is as good as they always are. I read every single one.”—Malcolm Gladwell

An excerpt from The Midnight Line

Jack Reacher and Michelle Chang spent three days in Milwaukee. On the fourth morning she was gone. Reacher came back to the room with coffee and found a note on his pillow. He had seen such notes before. They all said the same thing. Either directly or indirectly. Chang’s note was indirect. And more elegant than most. Not in terms of presentation. It was a ballpoint scrawl on motel notepaper gone wavy with damp. But elegant in terms of expression. She had used a simile, to explain and flatter and apologize all at once. She had written, “You’re like New York City. I love to visit, but I could never live there.”

He did what he always did. He let her go. He understood. No apology required. He couldn’t live anywhere. His whole life was a visit. Who could put up with that? He drank his coffee, and then hers, and took his toothbrush from the bathroom glass, and walked away, through a knot of streets, left and right, toward the bus depot. She would be in a taxi, he guessed. To the airport. She had a gold card and a cell phone.

At the depot he did what he always did. He bought a ticket for the first bus out, no matter where it was going. Which turned out to be an end-­of-­the-­line place way north and west, on the shore of Lake Superior. Fundamentally the wrong direction. Colder, not warmer. But rules were rules, so he climbed aboard. He sat and watched out the window. Wisconsin flashed by, its hayfields baled and stubbly, its pastures worn, its trees dark and heavy. It was the end of summer.

It was the end of several things. She had asked the usual questions. Which were really statements in disguise. She could understand a year. Absolutely. A kid who grew up on bases overseas, and was then deployed to bases overseas, with nothing in between except four years at West Point, which wasn’t exactly known as a leisure-­heavy institution, then obviously such a guy was going to take a year to travel and see the sights before he settled down. Maybe two years. But not more. And not permanently. Face it. The pathology meter was twitching.

All said with concern, and no judgment. No big deal. Just a two-­minute conversation. But the message was clear. As clear as such messages could be. Something about denial. He asked, denial of what? He didn’t secretly think his life was a problem.

That proves it, she said.

So he got on the bus to the end-­of-­the-­line place, and he would have ridden it all the way, because rules were rules, except he took a stroll at the second comfort stop, and he saw a ring in a pawn shop window.

The second comfort stop came late in the day, and it was on the sad side of a small town. Possibly a seat of county government. Or some minor part of it. Maybe the county police department was headquartered there. There was a jail in town. That was clear. Reacher could see bail bond offices, and a pawn shop. Full service, right there, side by side on a run-­down street beyond the restroom block.

He was stiff from sitting. He scanned the street beyond the restroom block. He started walking toward it. No real reason. Just strolling. Just loosening up. As he got closer he counted the guitars in the pawn shop window. Seven. Sad stories, all of them. Like the songs on country radio. Dreams, unfulfilled. Lower down in the window were glass shelves loaded with smaller stuff. All kinds of jewelry. Including rings. Including class rings. All kinds of high schools. Except one of them wasn’t. One of them was West Point 2005.

It was a handsome ring. It was a conventional shape, and a conventional style, with intricate gold filigree, and a black stone, maybe semi-­precious, maybe glass, surrounded by an oval hoop that had West Point around the top, and 2005 around the bottom. Old-­style letters. A classic approach. Either respect for bygone days, or a lack of imagination. West Pointers designed their own rings. Whatever they wanted. An old tradition. Or an old entitlement, perhaps, because West Point class rings had been the first class rings of all.

It was a very small ring.

Reacher wouldn’t have gotten it on any of his fingers. Not even his left-­hand pinky, not even past the nail. Certainly not past the first knuckle. It was tiny. It was a woman’s ring. Possibly a replica for a girlfriend or a fiancée. That happened. Like a tribute or a souvenir.

Reacher opened the pawn shop door. He stepped inside. A guy at the register looked up. He was a big bear of a man, scruffy and unkempt. Maybe in his middle thirties, dark, with plenty of fat over a big frame anyway. With some kind of cunning in his eyes. Certainly enough to perfect his response to his sudden six-­five two-­fifty visitor. Driven purely by instinct. The guy wasn’t afraid. He had a loaded gun under the counter. Unless he was an idiot. Which he didn’t look. All the same, the guy didn’t want to risk sounding aggressive. But he didn’t want to sound obsequious, either. A matter of pride.

Not well, Reacher thought. To be honest. Chang would be back in Seattle by then. Back in her life.

But he said, “Can’t complain.”

“Show me your class rings.”

The guy threaded the tray backward off the shelf. He put it on the counter. The West Point ring had rolled over, like a tiny golf ball. Reacher picked it up. It was engraved inside. Which meant it wasn’t a replica. Not for a fiancée or a girlfriend. Replicas were never engraved. An old tradition. No one knew why.

Not a tribute, not a souvenir. It was the real deal. A cadet’s own ring, earned over four hard years. Worn with pride. Obviously. If you weren’t proud of the place, you didn’t buy a ring. It wasn’t compulsory.

The bus blew its horn three times. It was ready to go, but it was a passenger short. Reacher put the ring down and said, “Thank you,” and walked out of the store. He hustled back past the restroom block and leaned in the door of the bus and said to the driver, “I’m staying here.”

“Not looking for one.”

The guy pulled a lever and the door sucked shut in Reacher’s face. The engine roared and the bus moved off without him. He turned away from the diesel smoke and walked back toward the pawn shop.

The guy in the pawn shop was a little disgruntled to have to get the ring tray out again so soon after he had put it away. But he did, and he placed it in the same spot on the counter. The West Point ring had rolled over again. Reacher picked it up.

He said, “Do you remember the woman who pawned this?”

“Everything in here is legal.”

“I don’t care. All I want is the name of the woman who brought you this ring.”

“We went to the same school.”

“Where is that? Upstate?”

“None taken. I was from an earlier generation. But the place doesn’t change much. Which means I know how hard she worked for this ring. So now I’m wondering what kind of unlucky circumstance made her give it up.”

The guy said, “What kind of a school was it?”

“They teach you practical things.”

“Maybe she died in an accident.”

“Maybe she did,” Reacher said. Or not in an accident, he thought. There had been Iraq, and there had been Afghanistan: 2005 had been a tough year to graduate. He said, “But I would like to know for sure.”

“I can’t tell you exactly.”

“Trade schools have that?”

“There was no woman. I bought that ring. With a lot of other stuff.”

“About a month ago.”

“I’m not going to tell you my business. Why should I? It’s all legal. It’s all perfectly legitimate. The state says so. I have a license and I pass all kinds of inspections.”

“Then why be shy about it?”

The guy paused a beat.

Then he said, “It was from a guy who helps out with a charity. People donate things and take the deduction. Mostly old cars and boats. But other things, too. The guy gives them an inflated receipt for their tax returns, and then he sells the things he gets wherever he can, for whatever he can, and then he cuts a check to the charity. I buy the small stuff from him. I get what I get, and I hope to turn a profit.”

“So you think someone donated this ring to a charity and took a deduction on their income taxes?”

“Makes sense, if the original person died. From 2005. Part of the estate.”

“I don’t think so,” Reacher said. “I think a relative would have kept it.”

“Depends if the relative was eating well.”

“You got tough times here?”

“In exchange for phony receipts. In the end the government eats the tax relief. Welfare by another name.”

Reacher said, “Who is the charity guy?”

“It’s none of your business. I mean, who the hell are you?”

“Just a guy already having a pretty bad day. Not your fault, of course, but if asked to offer advice I would have to say it might prove a dumb idea to make my day worse. You might be the straw that breaks the camel’s back.”

“You threatening me now?” 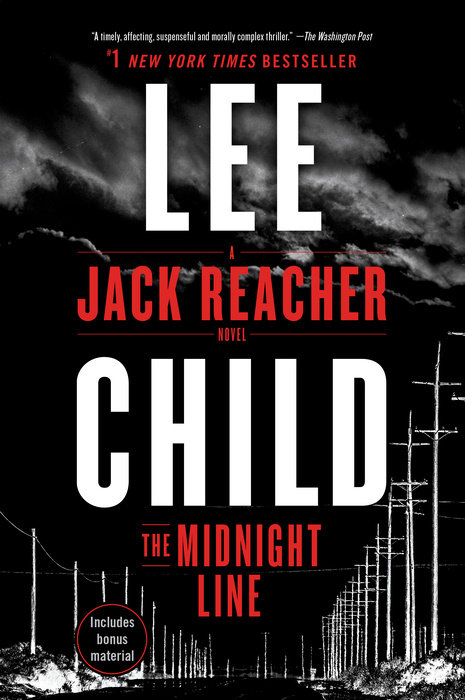