(and Fruits, Nuts, Berries, Grains, and Other Crops) Than You Ever Thought Possible on Less Land with Less Water Than You Can Imagine

Long before it was a trend, How to Grow More Vegetables brought backyard ecosystems to life for the home gardener by demonstrating sustainable growing methods for spectacular organic produce on a small but intensive scale. How to Grow More Vegetables has become the go-to reference for food growers at every level, whether home gardeners dedicated to nurturing backyard edibles with minimal water in maximum harmony with nature's cycles, or a small-scale commercial producer interested in optimizing soil fertility and increasing plant productivity. In the ninth edition, author John Jeavons has revised and updated each chapter, including new sections on using less water and increasing compost power.

An excerpt from How to Grow More Vegetables, Ninth Edition

There is an exciting challenge ahead of us. How can we revitalize our extraordinary planet, ensuring life and health for the environment, the life-forms of myriad ecosystems, humankind, and future generations? The answer is as close to us as the food we consume each day. We can begin to create a better world from right where we are—in home gardens and mini-farms. Millions of people in more than 140 countries are already using Grow Biointensive sustainable mini-farming techniques to work toward this better world.

We “farm” as we eat. If we consume food that has been grown using methods that inadvertently deplete the soil in the growing process, we are responsible for depleting the soil. It is how we are “farming.” If, instead, we raise or request food grown in ways that heal the earth, then we are healing Earth and its soils. Our daily food choices make the difference. We can choose to sustain ourselves while increasing the planet’s vitality. In the process, we preserve resources, breathe cleaner air, enjoy good exercise, and eat pure food.

What are the dimensions of the challenge of raising food that sustains the soil? Current agricultural practices reportedly destroy approximately 6 pounds of soil for each 1 pound of food produced.1 United States croplands are losing topsoil about eighteen times faster than the soil formation rate. This loss is not sustainable. In fact, worldwide as little as 27 years’ worth of farmable soil remains.

Why is this happening? Conventional agricultural practices often deplete the soil eighteen to eighty times more rapidly than nature builds soil. This phenomenon happens when the humus (cured organic matter) in the soil is used up and not replaced, when cropping patterns are used that tend to deplete the soil’s structure, and when minerals are removed from the soil more rapidly than they are replaced. Even organic farming probably depletes the soil nine to sixty-seven times faster than nature builds it, by importing organic matter and minerals from other soils, which thereby becomes increasingly depleted. The planetary result is a net reduction in overall soil quality.

John Jeavons is the director of Ecology Action, an environmental research and education organization that has been working to revolutionize small-scale food production through biointensive growing around the world since 1972. To learn more, visit growbiointensive.org.

(and Fruits, Nuts, Berries, Grains, and Other Crops) Than You Ever Thought Possible on Less Land with Less Water Than You Can Imagine 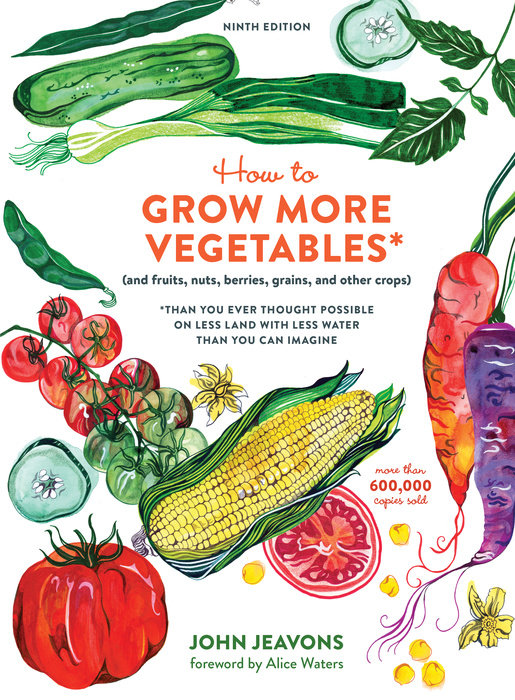