NEW YORK TIMES BESTSELLER • Hope blooms anew for the Four Lands in this riveting conclusion, not only to the Fall of Shannara series but to the entire Shannara saga—a truly landmark event over forty years in the making!

Since he first began the Shannara saga in 1977, Terry Brooks has had a clear idea of how the series should end, and now that moment is at hand.

As the Four Lands reels under the Skaar invasion—spearheaded by a warlike people determined to make this land their own—our heroes must decide what they will risk to save the integrity of their home. Even as one group remains to defend the Four Lands, another is undertaking a perilous journey across the sea to the Skaar homeland, carrying with them a new piece of technology that could change the face of the world forever. And yet a third is trapped in a deadly realm from which there may be no escape.

Filled with twists and turns and epic feats of derring-do—not untouched by tragedy—this is vintage Terry Brooks, and a fitting end to a saga that has gathered generations of readers into its fold.

An excerpt from The Last Druid

At first, after Clizia’s trap was sprung, Drisker Arc fell into blackness for an endless stretch of time. There was nothing to see—and no sound, no tastes or smells, no feeling, no anything. Drisker folded into a ball and hung on, waiting for something more to reveal itself. He was not at all sure what sort of trap he had stumbled into. He was certain it had been designed to ensnare him, but other than that he couldn’t be sure of its purpose. He managed to summon sufficient magic to enclose himself in a protective shield so that he would not be helpless when the falling ended, but other than this single act he could manage nothing.

The end came when his descent slowed and then stopped altogether. He was still cocooned away, still unaware of where he was, still a prisoner with no means available to free himself.

He waited patiently, keeping control over himself with steady and purposeful determination.

Eventually, he realized the blackness was giving way to a semblance of daylight. As his surroundings began to take shape, he saw that he was in a thick patch of woods, its trees old and shaggy and witch-bent, with limbs stretching so far skyward he could not tell where they ended. The ground around him was a mix of brush and grasses, thickly grown but not lush. Rather, everything had a haggard and badly worn air that suggested a place where life had been forced to fight hard for survival. As his senses heightened, he could smell rot and decay. He could see blackened patches on the trees and brush; he could smell and taste the parts that were slowly being eaten away by the corrosion.

He searched for movement in the twilight darkness, but found none. If anything lived here, it was either in hiding or out of view.

He was infuriated he had allowed this to happen. It had been a foolish choice to go after Clizia alone, but he had thought it was best to catch up to the rogue Druid at once. Tarsha and Tavo were both down, but while both were stunned, neither seemed seriously injured and he didn’t think it necessary to wait for them to recover. So, impulsively, he had determined he would do what was needed on his own.

Had he not made this choice—which, in retrospect, was likely the most foolish of his entire life—he might have lost Clizia but would not be wherever it was he found himself now. He should have helped his companions and gone after her later. Now everything and everyone was at risk.

He found himself worrying about the fate of his sibling companions. Having disposed of him, Clizia would have gone back either to take them prisoner or to kill them. If she succeeded in doing either, he would have to place the blame squarely on his own shoulders, and he would spend the rest of his life—whatever life he had left—blaming himself for what had happened.

Yet both Kaynins possessed the considerable magic of the wishsong to aid them, and both were resourceful. He had to hope this was sufficient to see them through any confrontation that took place. Tarsha, in particular, was smart enough to find a way to protect them, and would not tend toward rash behavior of the sort he had just exhibited. With Tavo beside her, she should be more than a match for Clizia Porse.

At least, that was what he told himself.

The light had brightened further, and his surroundings were coming into sharper focus. He could see mountains and hills through breaks in the trees. He could just spy the thread of a distant river, flowing sluggishly across a barren plain. What was troubling was that everything was pretty much the same color, wherever he looked—a dismal, flat, ashen gray. Sky, horizon, landmarks, the air itself, all were marked by gloom that . . .

No! It wasn’t possible. Even Clizia couldn’t do that! He stared into the distance some more, then dropped the magic that shielded him and climbed to his feet to look more closely. He felt his throat tighten. Maybe she couldn’t, but somehow she had. With the aid of magic that should have been beyond her command, she had dispatched him to the one place from which he couldn’t escape.

He felt everything drop away—any chance of finding a way out, all possibility of rescue, even the hope of extending his life beyond the short, brutal span that now seemed to be his destiny. Created in the time of Faerie by the creatures of light to imprison those they believed to be servants of the dark, the Forbidding was a place of no return. Once locked away, you were there until you died. Grianne Ohmsford alone had managed to escape, and then only with the help of her nephew, Penderrin. The Druid Histories had recorded it all. Drisker had never thought he would need to know more about it in his lifetime.

Now to find himself imprisoned like this—to find himself trapped in a cage with no door and no lock or key—left him devastated. He sat down slowly, trying to compose his scattered thoughts and rioting emotions.

He could not expect help from Tarsha Kaynin. She wouldn’t know—couldn’t know—where he was. Even if she were to somehow discover what had happened, she wouldn’t have the faintest idea how to free him. None of those who had gone to Skaarsland could be of any help, either.

Then he remembered something else. When Grianne had first been sent into this prison by means of a powerful magic called a triagenel—and while the power of the Forbidding was still strong and undeniable—something already imprisoned within had to be sent into the Four Lands to take her place. A switch had to be made for the magic to work. So what sort of demon had Clizia released from the Forbidding to make room for him? Whatever had been released, he was in no position to do anything about it. It was all he could do to come to terms with his own situation. He was not yet reconciled to what had been done to him, but he knew enough about the danger he was in to want to settle his mind and focus on determining what he was going to do to stay alive. If nothing had begun hunting him already, it was only a matter of time.

And likely there would be more than one.

He knew the landscape of the Forbidding closely mirrored his own world—and aside from an absence of any real color, the terrain would approximate what he knew of the Four Lands. Grianne, according to her entries in the Druid Histories describing her imprisonment, had been taken to a fortress that was situated somewhere in this world close to where Tyrsis would have been in his. She had been taken there to service the whims of the Straken Lord and live out her life as his slave. In the end, that hadn’t worked out so well for the demon, which she subsequently escaped and later killed. But going to that fortress might be a reasonable starting point for Drisker.

Then another thought occurred to him, this one the most troubling yet.

Hadn’t Grianne Ohmsford been sent back to the Forbidding a second time, and wasn’t she still imprisoned here as a result?

The thought was sudden and unexpected, and Drisker found himself thinking back to his initial summoning of Allanon at the Hadeshorn, when Grianne—reverted now to the Ilse Witch—had come to him instead. She had told him she still lived and was still imprisoned and had come to him using the passageways of the dead. If he wanted her help in finding a way to save the Four Lands, she would give it to him, but only if he agreed to free her from the Forbidding. It had occurred to him then that keeping his end of the bargain might mean coming into the demon prison himself—perhaps even exchanging himself for her to keep his word. But now that he was here, he could find her and perhaps they could discover a way to escape together.

He was abruptly energized by the idea. Then, just as quickly, a further thought occurred. What if Clizia had already freed the Ilse Witch? What if she had already accomplished what he had promised, and it was Grianne for whom he had been swapped?

The thought was so chilling that, for a moment, he couldn’t breathe. What if it was Clizia’s intent that she and the Ilse Witch should be allies, rulers over the Four Lands from atop a new Druid order?

But he immediately decided that this conclusion presumed a lot. In the first place, how was Clizia to know that Grianne Ohmsford was still alive? And even if she were capable of making such a determination, an alliance between them was unlikely. Two such powerful Druids would never accept each other as equals. Neither would ever trust the other.

Drisker leaned against one of the ancient trees while trying to regain his composure. It was not an easy feat to accomplish. In truth, he was still shaken to his core by the raft of possibilities. He had gone from disbelief to belief back to disbelief in minutes, and he still wasn’t sure of what to do. Nor was he sure what his betrayer might have already done while he was trapped here. He needed to find out, and he couldn’t do it standing around bemoaning his fate.

He had to start moving right away. 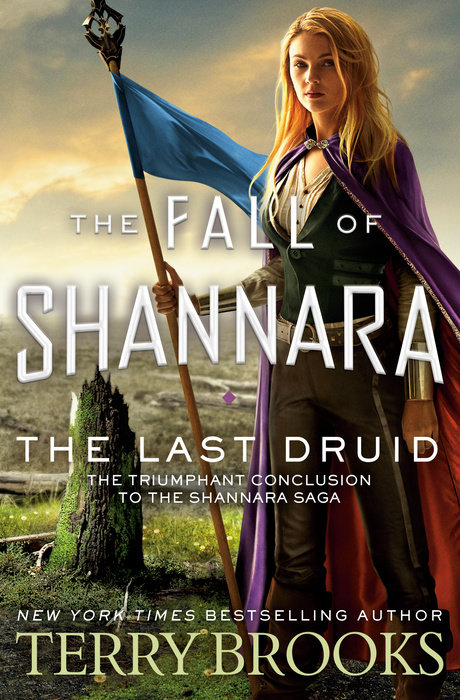