How I Write Sex Scenes

NEW YORK TIMES BESTSELLER • For writers looking to make sure their next physical interlude on the page inspires readers to share the moment rather than to laugh at it, bestselling author Diana Gabaldon divulges the writing secrets behind the sex scenes in her wildly popular Outlander novels.

In this revealing compendium, acclaimed writer Diana Gabaldon shares her invaluable lessons for creating an immersive reading experience, from evoking a mood to using the power of emotions to communicate physical intimacy. You’ll learn the difference between gratuitous sex and genuine encounters that move the story forward, and how to handle less-than-savory acts that nevertheless serve a narrative purpose. Gabaldon also notes that sex can be conveyed instead of described. With such tips as “The Rule of Three” for involving the senses, handy lists of naughty euphemisms (with instructions for use), and Gabaldon’s own examples from the Outlander novels, “I Give You My Body . . .” is a master class in writing to draw readers in and keep them riveted to the page.

CHARACTER
The Key to Good Sex

Everything in fiction writing comes down to character, and sex scenes are no exception. If you can replace your characters’ names with Dick and Jane (or Harry Reid and Nancy Pelosi, say) without substantially altering your scene—you need to think again. In good sex-scene writing, this particular scene could only have happened to these two people.

The point here is that you need to know who your characters are and how they may (or may not) respond to the situation in which they find themselves. I have met writers who feel an obligation (and a heavy one they find it) to insert sex scenes here and there, in order to satisfy what they see as the demands of genre, editor, or readers, but such a sense of obligation should be resisted.

I have one friend who wrote historical romances for years, without actually liking the genre very much. She said the historical research made it bearable to write the stories, but she simply couldn’t force herself to write (what she referred to as) “fuck scenes” after a few books. She’d put off the dire necessity as long as possible, procrastinating and moaning to her next-door neighbor (who did like historical romances) about how horrible this was. Finally the neighbor offered to write the “f-scenes” for her, an offer she hesitantly accepted, figuring it was the only way she was going to be able to finish the book she had under contract.

In this situation, everything worked out happily: the neighbor (who was also a writer, though hitherto unpublished) had fun writing the sexual encounters, my friend then smoothed the style so that the inserted scenes fit with the rest of the book and she got paid, and a good time was had by all—including, we trust, the eventual readers.

But the point here is only you can prevent forest—no, wait. Only you can decide—on behalf of the characters—whether they really want to have sex here or not. They may not. And if not, you’re going to have a terrible time trying to force them to do it. Personally, I advise against it. Just listen to them; they’ll tell you whether they want to, don’t want to, think they want to but would like to just make out for a little while first…

Beyond deciding whether to have sex, the characters also decide how. Or they should. Sexual encounters can occasionally be impersonal, but unless that’s the deliberate effect you’re striving for (and you might be, under some circumstances, though I certainly hope that neither you nor your characters are in the habit of picking up strangers in bars and going to bed with them), you should treat a sexual encounter between your characters as an emotional, rather than a simply physical, transaction.

This doesn’t necessarily mean pages and pages describing the characters’ feelings. When it comes to emotions, the less you say about them, the stronger the emotions themselves will play on the page.

Bear in mind that dialogue is the single best and most economical tool you have in hand for describing characters; it’s also one of the best means of describing the emotional transaction taking place between them in a sexual context. Good characters talk in bed.

One way to look at it is that a good sex scene is a dialogue scene with specific body language. Granted, people don’t always talk during sex, but they often exchange a few words prior to the Act, and your viewpoint character (the person through whose eyes—and other bits—you’re experiencing the scene) is usually thinking something, even if the something is pretty incoherent. And often there’s an exchange of views following the shared experience, as well.

In this brief scene, husband and wife have been separated by various adventures and are reunited aboard ship in the West Indies.

“Upon second thoughts, I think perhaps we shall anchor here for the night,” he said thoughtfully, looking at me.
“Shall we?”
“And sleep ashore, where there’s room.”
“Room for what?” I asked, regarding him with suspicion.
“Well, I have it planned, aye?” he said, sloshing water over his face with both hands.
“You have what planned?” I asked. He snorted and shook the excess water from his beard before replying.
“I have been thinking of this for months, now,” he said, with keen anticipation. “Every night, folded up in that godforsaken nutshell of a berth, listening to Fergus grunt and fart across the cabin. I thought it all out, just what I would do, did I have ye naked and willing, no one in hearing, and room enough to serve ye suitably.” He lathered the cake of soap vigorously between his palms, and applied it to his face.
“Well, I’m willing enough,” I said, intrigued. “And there’s room, certainly. As for naked…”
“I’ll see to that,” he assured me. “That’s part o’ the plan, aye? I shall take ye to a private spot, spread out a quilt to lie on, and commence by sitting down beside you.”
“Well, that’s a start, all right,” I said. “What then?” I sat down next to him on the berth. He leaned close and bit my earlobe very delicately.
“As for what next, then I shall take ye on my knee and kiss ye.” He paused to illustrate, holding my arms so I couldn’t move. He let go a minute later, leaving my lips slightly swollen, tasting of ale, soap, and Jamie.
“So much for step one,” I said, wiping soapsuds from my mouth. “What then?”
“Then I shall lay ye down upon the quilt, twist your hair up in my hand, and taste your face and throat and ears and bosom wi’ my lips,” he said. “I thought I would do that until ye start to make squeaking noises.”
“I don’t make squeaking noises!”
“Aye, ye do,” he said. “Here, hand me the towel, aye?”
“Then,” he went on cheerfully, “I thought I would begin at the other end. I shall lift up your skirt and—” His face disappeared into the folds of the linen towel.
“And what?” I asked, thoroughly intrigued.
“And kiss the insides of your thighs, where the skin’s so soft. The beard might help there, aye?” He stroked his jaw, considering.
“It might,” I said, a little faintly. “What am I supposed to be doing while you do this?”
“Well, ye might moan a bit, if ye like, to encourage me, but otherwise, ye just lie still.”
He didn’t sound as though he needed any encouragement whatever. One of his hands was resting on my thigh as he used the other to swab his chest with the damp towel. As he finished, the hand slid behind me, and squeezed.
“ ‘My beloved’s arm is under me,’ ” I quoted. “ ‘And his hand behind my head. Comfort me with apples, and stay me with flagons, for I am sick of love.’ ”
There was a flash of white teeth in his beard.
“More like grapefruit,” he said, one hand cupping my behind. “Or possibly gourds. Grapefruit are too small.”
“Gourds?” I said indignantly.
“Well, wild gourds get that big sometimes,” he said. “But aye, that’s next.” He squeezed once more, then removed the hand in order to wash the armpit on that side. “I lie upon my back and have ye stretched at length upon me, so that I can get hold of your buttocks and fondle them properly.” He stopped washing to give me a quick example of what he thought proper, and I let out an involuntary gasp.
“Now,” he went on, resuming his ablutions, “should ye wish to kick your legs a bit, or make lewd motions wi’ your hips and pant in my ear at that point in the proceedings, I should have no great objection.”
“I do not pant!”
“Aye, ye do. Now, about your breasts—”
“Oh, I thought you’d forgotten those.”
“Never in life,” he assured me. “No,” he went blithely on, “that’s when I take off your gown, leaving ye in naught but your shift.”
“I’m not wearing a shift.”
“Oh? Well, no matter,” he said, dismissing this. “I meant to suckle ye through the thin cotton, ’til your nipples stood up hard in my “mouth, and then take it off, but it’s no great concern; I’ll manage without. So, allowing for the absence of your shift, I shall attend to your breasts until ye make that wee bleating noise—”
“I don’t—”
“And then,” he said, interrupting, “since ye will, according to the plan, be naked, and—provided I’ve done it right so far—possibly willing as well—”
“Oh, just possibly,” I said. My lips were still tingling from step one.
“—then I shall spread open your thighs, take down my breeks, and—” He paused, waiting.
“And?” I said, obligingly.
The grin widened substantially.
“And we’ll see what sort of noise it is ye don’t make then, Sassenach.”
Excerpt from Voyager

Diana Gabaldon is the #1 New York Times bestselling author of the wildly popular Outlander novels—Outlander, Dragonfly in Amber, Voyager, Drums of Autumn, The Fiery Cross, A Breath of Snow and Ashes (for which she won a Quill Award and the Corine International Book Prize), An Echo in the Bone, and Written in My Own Heart’s Blood—as well as a collection of Outlander fiction, Seven Stones to Stand or Fall; the related Lord John Grey books Lord John and the Private Matter, Lord John and the Brotherhood of the Blade, Lord John and the Hand of Devils, and The Scottish Prisoner; two works of nonfiction, The Outlandish Companion, Volumes 1 and 2; the Outlander graphic novel, The Exile; and The Official Outlander Coloring Book. She lives in Scottsdale, Arizona, with her husband.

How I Write Sex Scenes 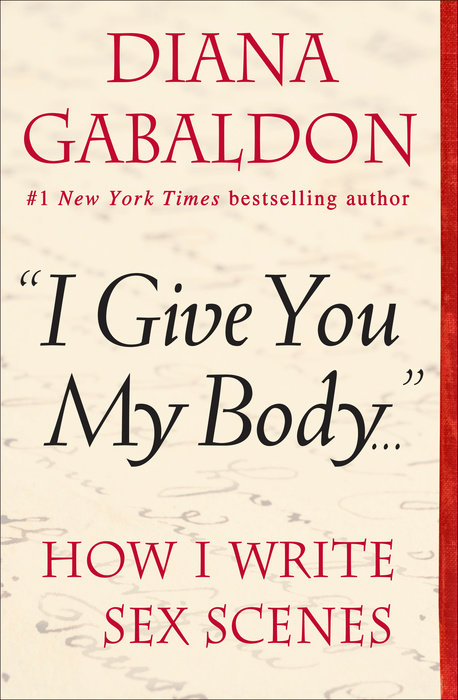