A close-up, action-filled narrative about the crucial role the U.S. Navy played in the early years of the Cold War, from the New York Times bestselling author of The Fleet at Flood Tide

This landmark account of the U.S. Navy in the Cold War, Who Can Hold the Sea combines narrative history with scenes of stirring adventure on—and under—the high seas. In 1945, at the end of World War II, the victorious Navy sends its sailors home and decommissions most of its warships. But this peaceful interlude is short-lived, as Stalin, America’s former ally, makes aggressive moves in Europe and the Far East. Winston Churchill crystallizes the growing Communist threat by declaring the existence of “the Iron Curtain,” and the Truman Doctrine is set up to contain Communism by establishing U.S. military bases throughout the world.

Set against this background of increasing Cold War hostility, Who Can Hold the Sea paints the dramatic rise of the Navy’s crucial postwar role in a series of exciting episodes that include the controversial tests of the A-bombs that were dropped on warships at Bikini Island; the invention of sonar and the developing science of undersea warfare; the Navy’s leading part in key battles of the Korean War; the dramatic sinking of the submarine USS Cochino in the Norwegian Sea; the invention of the nuclear submarine and the dangerous, first-ever cruise of the USS Nautilus under the North Pole; and the growth of the modern Navy with technological breakthroughs such as massive aircraft carriers, and cruisers fitted with surface-to-air missiles.

As in all of Hornfischer’s works, the events unfold in riveting detail. The story of the Cold War at sea is ultimately the story of America’s victorious contest to protect the free world.

An excerpt from Who Can Hold the Sea

Fleet at a Crossroads

When Admiral William F. Halsey, Jr., arrived in New York City early in the morning on Friday, December 14, 1945, snow blanketed nearly the entirety of the Empire State. An overnight storm had forced the cancellation of most flights into La Guardia Field, so he traveled up from Washington by rail. He took a waiting limousine from Penn Station to the Waldorf-Astoria Hotel, refreshed himself with a nap, then donned his whites and took the limo to the airport in Queens. A motorcade was awaiting the conqueror of the Pacific. A Navy band greeted him with a flourish. Two battalions of sailors presented arms as the cannoneers of an honor guard fired a seventeen-gun salute, two short of what the newly minted five-star admiral deserved. Holding his greatcoat tight against the wind, Halsey joined New York Mayor Fiorello H. La Guardia in an open car.

Halsey was less than two months home from Japan. After the boozy celebration in Yokohama that had marked his relief from occupation duty and fleet command, he had flown home to Pearl Harbor, then begun a homeward transit that ended with the festal passage of his flagship, the battleship South Dakota, along with thirteen other vessels, under the Golden Gate Bridge on October 15.

A worldwide homecoming was under way. Demobilization was the word of the day. The drawdown was swift and its effects stunning. Just ninety days after Tokyo’s surrender, with its mission switched from crushing Japan to saving her, the U.S. military was giving away its strength at a rate of 1.5 million men a month. As Admiral Chester W. Nimitz, the Pacific commander in chief, wrote to Secretary of the Navy James V. Forrestal, after four years of war, peace was an abnormal state. “The vast machine that had gained victory had to be ground to a stop, and flow of material had to be checked, then reversed. The problems of demobilization and return to a peacetime basis were in some respects more difficult than those of continuing the war.” On the day Halsey arrived in New York, nine harbors on the East and West coasts were scheduled to receive seventy-nine ships bearing more than sixty-two thousand war veterans. From Calcutta and Marseilles, from Bermuda, Antwerp, and Manila, the maritime carriage that had delivered America’s armies worldwide brought them home again, just in time to celebrate Christmas—“the first in six years not mocked by universal war,” Nimitz noted. The newspapers published the itineraries, listing returning ships and units. In New York, the arrival of the passenger liner Queen Mary, bringing home 11,409 combat veterans from Southampton, England, that same day would have been the story had Halsey not taken the headlines.

As the leading public face of the Navy, he was the one officer who could be counted upon to command a crowd. His peers during the war—Raymond Spruance, Marc Mitscher, Nimitz himself—were by comparison distant from the public, disinclined to speak of their work, secretive and necessarily so, they said. The Navy employed a small handful of public relations officers to buffer its leaders from the inquiries of the press. But with controversy now raging between the Army and Navy over their postwar roles, missions, and appropriations, the brain trust of the sea services realized that the game of public affairs might be a contest for their survival. This more than any surplus of ticker tape on Wall Street accounted for Halsey’s presence in an open limo on a bitter winter’s morning.

The car accelerated into the bustle of Queens, then pushed south on Thirty-fourth Avenue across the Meeker Avenue Bridge toward Brooklyn. The energy of the crowds sustained through Greenpoint and all the way to the ramp of the Manhattan Bridge. Crossing the East River, Halsey could look down over the waterfront headquarters of the New York Port of Embarkation, from which half of the wartime armies fielded by the United States had shipped overseas. The Brooklyn Navy Yard, employing at its wartime peak more than 71,000 workers, had constructed just eighteen months earlier the battleship Missouri, following in the wake of the Iowa and North Carolina out Lower New York Bay and into action. The last of the Essex-class carriers, the USS Oriskany, was launched here sixty days before Halsey arrived. Her sister ship Reprisal languished incomplete, awaiting use in ordnance tests and scrapping.

The U.S. Navy ended World War II with nearly 1,200 combatant ships, 41,000 planes, and 3.4 million personnel. It had 758,000 civilians on its worldwide payroll, more than half of them at the government-owned naval shipyards at Bremerton, Boston, Charleston, Mare Island, New York, Norfolk, Pearl Harbor, Philadelphia, Portsmouth, San Francisco, and San Pedro, and naval aviation centers such as Pensacola, Florida, Whidbey Island, Washington, and Corpus Christi, Texas. The Navy’s infrastructure of yards, bases, and shore facilities was the product of about $12 billion in wartime investment that drove a sixteenfold increase in its prewar size. Navy expenditures on plant facilities were 25 percent larger than the plant accounts of General Motors, U.S. Steel, and AT&T combined. The Bureau of Ships alone had an investment account nearly as big as U.S. Steel. Though new ships were still coming—the Brooklyn yard had put the aircraft carrier Franklin D. Roosevelt, the third of the big new Midway-class flattops, into commission in October—the Navy that had bestridden the world in the winter of 1945 was coming home to shrink and diminish, discharging its strength back into the nation.

In Philadelphia, experimental techniques of ship preservation were ready for mass application in a $40 million effort that would put 1,896 ships into an inactive reserve by September 1, 1946. The light cruiser USS Brooklyn was the first combatant to undergo “mothballing.” The metaphor from the coat closet understated the intricacies of preserving such a large vessel in a state that would make possible her return to service within thirty days of an activation order. Yard workers removed all perishable and combustible stores, including food, batteries, fuel, and explosives. Metal surfaces susceptible to corrosion, such as motors, pumps, and engines, were sprayed with a waxy rust retardant. Sensitive equipment that could not be removed for dehumidified storage received an additional airtight casing, woven with five layers from a spray gun and sealed with a coat of aluminum paint. Inside, dehumidifiers connected to ventilation ducts and fire mains allowed the ship to inhale dry air and exhale humidity. Where airflow did not reach, desiccants and other drying agents did the job passively. After the six-month process was finished, a complement of just five officers and fifty-nine men aboard could maintain a cruiser like the Brooklyn during her long sleep in the “zipper fleet.”

The rapid pace of the demobilization concerned President Harry S. Truman. A believer in a “prepared soldier-citizenry,” he was working that December on a bill to enact universal military training. The new law would require every male between the ages of eighteen and twenty to report for a year of indoctrination followed by six years in the reserves. With such a base of manpower available to redeploy hundreds of mothballed ships, a wartime fleet could be more quickly surged in case of war. “We can with fairness no longer look to the veterans of this war for any future military service,” the president would write.

Meanwhile, the imperative to cut costs fell upon the Pentagon like a weather front. At the urging of Truman and with the full support of the War Department, the Senate was considering a bill to unify the Navy and War departments, along with a new department designating the Air Force as a single administrative entity. S. 2044 would put the tripartite Pentagon under the leadership of a single Secretary of Common Defense and deprive the secretaries of war and the Navy of their long-standing membership in the president’s cabinet. The push for change had begun the day before Germany surrendered, on May 7, 1945, when the Army’s top civilian administrator, Secretary of War Henry L. Stimson, wrote Secretary Forrestal to argue that the two departments should be unified. With one powerful secretary supervising the entire defense establishment, Stimson said, there would come a windfall of savings. “The principle is settled. . . . ​The problem is merely to achieve the most effective possible execution of an established policy. . . . ​I think it will be our duty to report that belief to the Congress in the earnest hope that your department can come along then, or later, with a concurring view.”

Stimson’s insistent voice was that of a man secure in his relationship with the White House. Having engineered the 1930 London Naval Treaty that had limited the size of interwar fleets, the Army boss was now promising to outdo himself, impairing the position of his rival service by unilateral decree. But Forrestal thought the service heads, Congress, and the Joint Chiefs of Staff should take the time to absorb more carefully the lessons of the Second World War, which at the time had yet to be won. That was where the matter lay until August, when the twin flashes of atomic light destroyed Japan as a war-making power.

James D. Hornfischer was a writer, literary agent, and book editor. He was the author of the New York Times bestsellers Neptune’s Inferno, The Last Stand of the Tin Can Soldiers, Ship of Ghosts, and The Fleet at Flood Tide, all widely acclaimed accounts of the U.S. Navy in the Pacific during World War II, as well as the upcoming Who Can Hold the Sea. His books have received numerous awards, including the Samuel Eliot Morison Award for Distinguished Service and the Naval Historical Foundation Distinguished Service Award. James D. Hornfischer died in 2021. 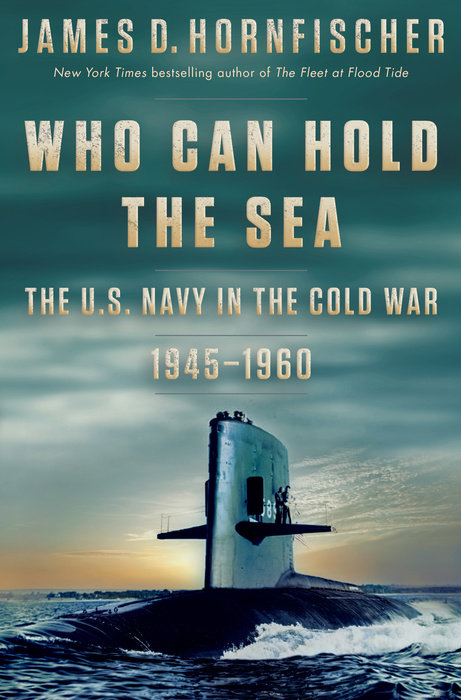