A homicide detective like no other delves into the mind of a madman in this explosive, page-turning near-future thriller from the author of The Memory Detective.

Cole Jones isn’t afraid to die. His whole career has been built on facing death in the most intimate of ways—by taking on victims’ memories to solve their murders. That’s why the tabloids dubbed him the Memory Detective. What Cole’s really afraid of is that the job is going to drive him crazy.

With fourteen memory transfers under his belt, Cole might finally be on the brink of madness. After solving a grisly murder that took a huge toll on his psyche, he promised himself he would become a “normal” cop. Then a bomb goes off in New York, and Cole is once again called on to use his unique skills—in a way he’s never been tested before.

With a dead suspect and mere days before the next threatened bombing, Cole must use the memories of the murderer to piece together a devious plot. Facing a literal ticking time bomb, Cole must fight the memories battling in his head. If he can’t put himself in the mind of the killer in time, more people will die. But if he can, something inside of him might die instead.

An excerpt from The Murderer's Memories

Twelve hours after the first bombing

Cole remembered the bomb. He could feel it, wrapped all the way around this body. He was surprised, for a moment, by its weight. Then he remembered the pictures of the rubble, the carnage and the bodies and the blood. Anything that could do that much damage would need to be heavy. A lack of weight would be an insult to the lives it destroyed. Cole understood the heft of a life cut short better than just about anyone. He had the memories of more than a dozen murder victims in his head already. This was the first time, however, that he’d taken the memory of a murderer.

So he focused, trying to remember more than merely the bomb’s weight. He slipped back into the bomber’s memories and soon began to remember walking through the mall. It was early. The place had just opened but the crowds were beginning to file in. The mall itself was, for at least a little while longer, still in one piece, but that was what the weight was for.

Yet now, stepping into the memory, Cole wished he knew more. With every stranger’s face that passed him in that mall, Cole wanted to know: Will you be near me when the bomb goes off or will you be lucky enough to have wandered away? The image of that mall on that morning could have come from any one of the dozens of memories in Cole’s head. It was a normal morning. Cole could hear the conversations going on around him but couldn’t remember a single thing that was said. It was merely the sound of ordinary, meaningless, wonderful chatter. Cole tried to look at the people as they walked by. They were mostly women, maybe three out of every four. He saw only a few children, wandering the mall, holding their mothers’ hands. Cole tried to wish each child away from him. He saw a small girl, maybe five years old, her brown hair tied in pigtails. She was so young. It wasn’t her time. Cole knew that, but he also knew it didn’t matter. Death doesn’t abide by the timelines set by our bleeding hearts. Then a young black boy walked by him, almost skipping as he walked, an irrepressible smile across his face. Get away from me, Cole couldn’t help but think. Get away.

The bomber kept walking. Cole couldn’t be sure where they were going. They simply appeared to be moving farther into the mall. Cole watched the faces of the people they passed. He was hoping that their reaction might give something away, might help him to figure out who this bomber was. They barely glanced in the bomber’s direction. They were too busy heading toward stores to notice the person who was about to change the lives of the lucky ones forever, and end the lives of the unlucky ones.

The bomber walked by a jewelry store where the employees inside were arranging the display cases. They passed a clothing store where two women were standing over a display of sweaters. One reached down to feel the fabric, rubbing it between her fingers. A small Asian woman walked past them, with an even smaller woman who Cole guessed was her mother. They were talking in another language and giggling. With each moment, with each step, the mall seemed to grow more crowded. No one seemed to notice the bomber. All these people were walking next to death without even realizing it.

Cole remembered hearing a child laugh. The boy was behind the bomber, running and laughing, his feet slapping the floor. Without turning to look at the child, the bomber simply kept walking. Cole had never experienced a memory like this before. It was so vivid, so clear. He felt like he could remember every electric, terrifying detail. Every sound popped in his ears. Every color flashed in front of him. Every single detail was there, intact inside the bomber’s memory. Cole almost felt more like he was watching a movie than recalling a memory, though it wasn’t merely the sights and the sounds. He remembered the feel of every step and, of course, he remembered the weight of the bomb, pulling downward toward the earth.

Something was missing, though. Cole felt it without initially understanding what it was. Amidst the sounds of people opening stores and beginning to shop, amidst the sounds of laughter and footsteps, amidst all of the sights and the sounds around him, Cole finally understood. The bomber was missing. Of course, the bomber was there with every footstep and every breath, but Cole couldn’t remember any emotion, any feeling at all. Step. Breathe. Step. Breathe. Watching the people crowding into the mall, the bomber must have known that some of them would be torn to shreds by the very bomb strapped around the bomber’s body. Cole couldn’t identify what the bomber felt in that moment. Fear? Excitement? Joy? Hate? He hadn’t known what to expect from the memories of a murderer, but he’d thought there would be some emotion. It simply wasn’t there. Step. Step. Breathe. A child’s laughter. A woman’s voice. An older couple walking together, holding hands, whispering to each other. A young woman opening up a kiosk in the center of the mall. Every small detail was vibrant and alive, but he remembered those details without feeling. It was as if the bomber didn’t exist, as if the bomber was nothing except for the bomb. To Cole, these didn’t feel like the memories of a person. They were the memories of a machine.

Cole wondered how he was supposed to learn anything about the bomber, when the bomber was barely present in the memory.

Then the memory began to slow down. Cole had been waiting for that. It meant that he was getting closer to the end. Almost all his memories of dying ended this way, stretching out the final moments. Cole didn’t try to speed up or slow down the memory, but let it come at its own pace. It was as if the memories themselves didn’t want to end, like they wanted to soak up every moment before all the moments were gone. The voices around him became muffled, like a recording that was slowed down so that you could try to hear the details in the silence between the sounds. Cole knew they were getting close to the middle of the mall, where the bomb went off. He’d been shown maps and pictures. Cole began to feel dizzy but he couldn’t tell, at first, if it was him or if he was remembering the bomber’s dizziness. The bomber stumbled—a quick, tiny stutter—then recovered and kept walking as if it hadn’t happened. In that moment, though, in that small stuttering step, Cole could remember feeling as if the bomb wasn’t there anymore. In that moment, the bomber had forgotten about the bomb. After the bomber stumbled and recovered, the bomb felt twice as heavy as it had felt before.

Cole remembered the laughter of another child. It occurred to him cruelly how much of the world’s laughter was the laughter of children. The bomber didn’t look toward the laughter. The dizziness persisted. Cole could remember sweat beginning to bead up on the bomber’s forehead. But he still couldn’t remember any emotion, just dizziness and sweat. There was a metal bench in front of them. Cole had seen that bench before. He’d seen its twisted remains in the pictures of the bombing’s aftermath. They were there. This was the place. It would soon end in an awful ball of fire consuming the bomber and everyone around. Eighteen of them would die, nineteen when you counted the bomber, multiples of that injured. Cole knew the numbers, though he wished he didn’t. Still unsteady, the bomber turned to sit down on the bench. The bomber was facing the mall now, facing these people who didn’t have any idea what was about to happen.

The bomber looked up at the clock hung high above the atrium. The bomber took a deep breath and, for the first time, Cole remembered the bomber’s thoughts. A few minutes and it will all be over for me. Then something else came to him in a rush, triggered by the glance at the clock. He wouldn’t quite call it a memory, more like an abstract piece of a memory, but it was overwhelming. A date and a time flashed through his brain: less than a week away. Cole tried to get back into the bomber’s memory, to see it through to the end, to try to learn more, but he couldn’t. He was blocked now. All he could remember was the date and the time. Then he understood.

T. S. Nichols was born and raised in New Jersey. He is a graduate of Columbia University and Georgetown University Law Center. He currently lives in Brooklyn with his wife and two sons. 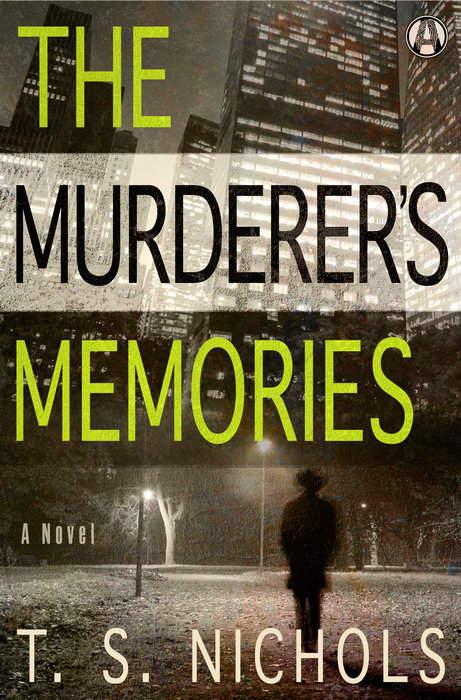