All the best in humanity rises to meet a powerful alien threat in the sequel to Salvation—part of an all-new trilogy from “the owner of the most powerful imagination in science fiction” (Ken Follett).

The comparative utopia of twenty-third-century Earth is about to go dreadfully awry when a seemingly benign alien race is abruptly revealed to be one of the worst threats humanity has ever faced. Driven by an intense religious extremism, the Olyix are determined to bring everyone to their version of God as they see it. But they may have met their match in humanity, who are not about to go gently into that good night or spend the rest of their days cowering in hiding. As human ingenuity and determination rise to the challenge, collective humanity has only one goal—to wipe this apparently undefeatable enemy from the face of creation. Even if it means playing a ridiculously long game indeed.

But in a chaotic universe, it is hard to plan for every eventuality, and it is always darkest before the dawn.

An excerpt from Salvation Lost

The dark, cold bulk of the Neána insertion ship had been traveling through interstellar space for twenty-two years before it flew across the faint twinkling specks of the star’s cometary belt. Half a light-year ahead, their G9 target star shone with a strong silver-white glare, casting its intense rays over a family of twelve planets. The fourth planet, a small, solid world, was emitting a bright babble of radio signals—a source that a Neána abode cluster had picked up when the Vayans began their tentative first broadcasts fifty-three years earlier.

A trio of moons orbited the warm, life-rich fourth planet in eccentric million-kilometer loops above its white clouds, lush continents, and deep blue oceans. Two of them were now also emitting electromagnetic signals; the radio waves were coming from the pioneering research bases that the native Vayans had recently constructed. Forty-seven different Vayan clans were operating space programs, putting aside their conflict-heavy history to collaborate on the great adventure out across the gulf of space.

The insertion ship flew in north of the solar ecliptic, shedding cold mass in irregular bursts like a black comet—a deceleration maneuver that took nineteen months. This was always the riskiest part of the voyage. The Vayans currently had thirty-two robot space probes traversing their solar system, sending back a great deal of crude science sensor data to their homeworld, as well as two high-powered observatories on the largest moon. The chance of one spotting the insertion ship was slim, but the controlling sentience took no chances. By the time it passed the innermost gas giant, it was down to twenty-five meters in diameter. It had no magnetic field, and the outer shell was fully radiation-absorbent in every spectrum, making it invisible to any telescopes.

As it closed on Vayan, it detected a spaceship departing one of the three stations in low orbit, a nuclear fission rocket sending it on a ten-month flight to the fifth planet. A crew of eleven Vayans was crammed into its small life-support cabin—emissaries of their species’ exuberant spirit, boldly outbound on their first interplanetary flight. Given that the Vayans had only launched their first chemical propellant rocket into orbit seventeen years earlier, the insertion ship’s controlling sentience was impressed by the speed of their technological progress.

During its long, lonely voyage between the stars, it had monitored the plethora of signals broadcast from Vayan, building up an extensive knowledge base of the species’ history and culture. Socially, they were organized along clan lines: a protective imperative bestowed by their distinct reproductive biology. Each female had up to ten mates, who all fertilized her egg cluster over the course of her fifteen-year adult life stage. When she was ready to gestate, she became immobile, feeding on the predigested pulp provided by her mates as her wombs began to swell. Giving birth to up to fifty infant Vayans was her last living act—though the insertion ship had recently picked up broadcasts speculating that modern medical techniques might be able to prolong female life after birth. From what the controlling sentience could understand, the concept was regarded as far-fetched and almost heretical. Though, so far, the Vayans seemed to have avoided the whole concept of deities and religion.

Physically, the Vayans had four legs supporting a rounded double-section body with eight upper arm-limbs. There was a long prehensile neck on the top, lifting up an ovoid cranium containing eight eyes and a combination ear–echo sonar organ, providing all-around perception. Their particular sensorium neurology meant they’d evolved past the concept of front and back and now had the capacity for free-ranging motion. That specific analytic ability gave the controlling sentience some difficulty when it came to developing equivalent thought routines for the six Vayan body biologics that it was now growing in its onboard molecular initiators. Fortunately, Vayan biochemistry was relatively easy to replicate.

As it closed to within a million kilometers of Vayan, the insertion ship discarded the last of its reaction mass as it performed a final deceleration maneuver. Now it was basically just falling toward the southernmost tip of the Farava continent. The lights of nighttime urban citadels sparkled across the continent, linked by the slender blue-green threads of bioluminescent transport rails. Tiny course correction ejecta refined the ship’s descent vector, steering it toward the coast, which was still thirty minutes from greeting the dawn. Even if some Vayan telescope chanced to find the ship now, it would simply appear to be a small chunk of natural space debris.

It hit the upper atmosphere and began to peel apart into six pear-shaped segments. The remaining matter broke away in fizzing sparks that produced a short-lived but beautiful starburst display streaking through the mesosphere. Below it, sheltered under their blanket of thick winter cloud, the clan packs of Gomarbab—the southernmost urban citadel on Vayan—remained oblivious to their interstellar visitor.

Each segment continued down, aerobraking with increasing severity as the atmosphere thickened around them. They slowed to subsonic velocity three kilometers above the surface, plunging through the clouds.

The segments were aimed at a small cove a few kilometers east of the urban citadel, where the gently undulating frost meadows ended in high cliffs atop pebble beaches. A hundred meters from the shore, six large splash plumes shot up into the air like thick geysers, crowning and splattering down on the slushy ice that bobbed about in the subzero saltwater.

The Neána metavayans floated to the surface. All that now remained of the insertion ship’s landing segments were thick layers of active molecule blocks, which covered their mottled blue-green hide like a blanket of translucent gel, insulating them from the cold. They began to swim ashore—an action that the native Vayans avoided as much as possible.

The beach was a narrow strip of sharp granite rocks, with brown bracken fronds shooting up from the wider cracks. A tall cliff loomed above it, with a narrow V-shaped gorge that offered a slippery pathway up to the frost meadows. The metavayans scrambled a short way up the incline as the pale dawn light began to seep through the murky clouds. Their last protective layer liquidized, draining down into the stones, where it would be flushed away by the next high tide.

“We made it,” one emitted in a stream of fast whistles: the local clan dialect.

“I was concerned about the landing impact,” said another, the female of the group. “Fortunately, I am undamaged. These bodies are sturdy.”

“My skin is puckering,” a third said. “This locale’s temperature is below optimum.”

The first one reached into a bag that had been strapped to his upper body and pulled out clothing modeled on commercial imagery that the Vayans had broadcast six months earlier. “I believe we should cover ourselves as quickly as—” He stopped in alarm.

A creature emerged from behind a large boulder at the base of the cliff. In all the years the insertion ship had monitored broadcasts from Vayan, no mention had been made of anything like it on the planet. The alien had a bipedal symmetry, with double-segment legs emerging from the base of a flat torso section. A pair of arms with limited articulation protruded from the top on either side of a squat neck that supported a bulbous head covered in tight, thin-looking ebony skin. Twin eyes gazed down at the metavayans. The creature was more than twice their height and walked toward them in an alarming motion that was mostly lurches.

It was clad in a thick green garment. An arm was extended, with the five small manipulator digits at the end curling around a metallic cylinder. An orifice on the creature’s head opened, and it produced a low, slow, hooting noise.

The cylinder began to talk in Vayan. “Pleased don’t be alarmed,” it said. “We have been monitoring your flight for several months. We didn’t try to contact the insertion ship directly, for fear it would self-destruct. We know how determined you are to protect your abode clusters.”

“What are you?” the first metavayan asked. “Do you share this world with the Vayan?”

The creature’s head twisted from side to side, and it began its ponderous hooting again. “My species is human, and my name is Yirella,” the translator told them. “I’m afraid there’s no such species as the Vayan. We invented them and their entire civilization in order to lure the Olyix here. We never expected a Neána ship to arrive as well. However, I welcome you to this star system, and invite you to join us in the fight against our common enemy.” 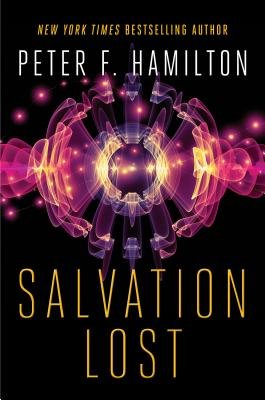