NEW YORK TIMES BESTSELLER • A restless golden boy and a girl with a troubled past navigate a love story that may be doomed before it even begins, in this “glorious, satisfying” (Adriana Trigiani) new novel from the author of All We Ever Wanted and The Lies That Bind.

“I’m a sucker for an iconic, against-all-odds love story, and Meant to Be truly delivers.”—Tia Williams, author of Seven Days in June

The Kingsley family is American royalty, beloved for their military heroics, political service, and unmatched elegance. In 1967, after Joseph S. Kingsley, Jr. is killed in a tragic accident, his charismatic son inherits the weight of that legacy. But Joe III is a free spirit—and a little bit reckless. Despite his best intentions, he has trouble meeting the expectations of a nation, as well as those of his exacting mother, Dottie.

Meanwhile, no one ever expected anything of Cate Cooper. She, too, grew up fatherless—and after her mother marries an abusive man, she is forced to fend for herself. After being discovered by a model scout at age sixteen, Cate decides that her looks may be her only ticket out of the cycle of disappointment that her mother has always inhabited. Before too long, Cate’s face is in magazines and on billboards. Yet she feels like a fraud, faking it in a world to which she’s never truly belonged.

When Joe and Cate unexpectedly cross paths one afternoon, their connection is instant and intense. But can their relationship survive the glare of the spotlight and the so-called Kingsley curse? In a beautifully written novel that captures a gilded moment in American history, Emily Giffin tells the story of two people searching for belonging and identity, as well as the answer to the question: Are certain love stories meant to be?

An excerpt from Meant to Be

I don’t remember my father. At least that’s what I tell people when they ask if I do. I was barely three years old when he died. I once read that it’s impossible to have memories much before the age language fully develops. Apparently, we need words to translate our experiences, and if memories aren’t encoded linguistically, they become irretrievable. Lost in our minds. So I’ve accepted that my vague recollections of the day he was put to rest at Arlington National Cemetery are fabricated—­an amalgam of photographs, news footage, and accounts from my mother that were somehow planted in my brain.

But there is one memory that can’t be explained away so easily. In it, I am wearing red footie pajamas, padding down the wide-­plank wood floors of our home in Southampton. It is nighttime, and I am following the white glow of Christmas lights, along with the hum of my parents’ voices. I reach the end of the hallway and peer around the corner, hiding so I don’t get in trouble. My mother spots me and orders me back to bed, but my father overrules her, laughing. I am overcome with joy as I run to him, climbing onto his lap and inhaling the cherry-­vanilla scent of his pipe. He wraps his arms around me, and I put my head on his chest, listening to the sound of his heart beating in my ear. My eyelids are heavy, but I fight sleep, focusing on one gold ball on our tree, wanting to stay with him as long as I can.

I guess it’s possible that this memory, too, is illusory, a scene I imagined or dreamed. But it almost doesn’t matter. It feels so real. So I’ve decided that it is, clinging to it as the one thing of my father’s that belongs only to me.

I know what people would say to this. They’d say, No, Joe, you have so much more than that. You have his wristwatch and his rocking chair. You have his eyes and his smile. You have his name.

It always comes back to that name—­Joseph S. Kingsley—­which we also share with his father, my grandfather. The S is for Schuyler, the name of the family who landed in New Amsterdam via the Dutch Republic in the seventeenth century. Somehow, we spun off from those folks—­as did the Oyster Bay Roosevelts—­privilege and wealth begetting more privilege and wealth as a handful of families intermarried, curried favor, and became increasingly prominent in business, the military, politics, and society. My great-­grandfather Samuel S. Kingsley, a financier and philanthropist, had been close friends with Teddy Roosevelt, the two boys growing up a few blocks apart in Manhattan, then attending Harvard together. When Samuel died in a freak hunting accident, Teddy became a mentor to my grandfather, recruiting him for his Great White Fleet and eventually introducing him to my grandmother, Sylvia, a fiery young suffragist from yet another prominent New York family.

Joseph and Sylvia married in 1919, right before my grandfather shipped out for the First World War. While Joseph commanded a Sampson-­class destroyer and earned the Navy Cross, my grandmother continued to battle for women’s right to vote, helping to organize the “Winning Plan,” a blitz campaign that lobbied southern states to ratify the Nineteenth Amendment. Her fight would last longer than the war, but on August 18, 1920, the suffragists finally got the thirty-­sixth state they needed when a young man in the Tennessee statehouse changed his vote at the eleventh hour, crediting an impassioned note he’d received from his mother.

My grandmother would tell this story often, citing it as an auspicious sign for her own son—­my father—­born that very same summer day. Two more boys and three girls would follow, making six kids in total, and although each had unique gifts and abilities, my grandmother turned out to be right. My father was special, her eldest son emerging as the standout of the Kingsley clan.

My father excelled in everything as a boy, then graduated at the top of his class at Harvard before matriculating at Yale Law. When World War II broke out during his second year at Yale, he entered the NROTC, then joined my grandfather in the Pacific. Whole books have been written about their time in combat, but the most significant moment came in late 1944, when the two Joseph Kingsleys found themselves side by side in the Battle for Leyte Gulf, the rear admiral and lieutenant junior grade narrowly surviving a series of kamikaze attacks, along with a typhoon, before securing the beachhead for the Sixth U.S. Army. Upon their return home, a photo was snapped of my grandmother embracing her husband and son on the tarmac. The image would appear on the cover of Life magazine, along with a one-­word headline heroes.

After the war, my grandfather served in Truman’s State Department, while my father pursued his love of naval aviation. He completed advanced flight training, then went on to test pilot school, kicking ass and taking names. Nobody worked harder, earned higher marks, or had more raw ambition than my father, but he also knew how to have a good time and could drink anyone under the table. He was a man of contradictions or, as one biographer described: “Rugged yet debonair, brash yet introverted, Joe, Jr., was a disciplined dreamer and a risk-­taking perfectionist.”

It’s a description I’ve often returned to in my mind, though I find myself wondering whether it was true, or if people just see what they want to see.

One thing I know for sure, though, is that my father had no enemies. It’s a claim heard in eulogies or biographies, especially about men who die young, but in my father’s case, it was the truth. Everyone loved him. Of course, that included women, and to his mother’s frustration, he loved an awful lot of them as a young man—­and had trouble choosing just one.

That all changed in April 1952, when my father attended a state dinner at the White House and met my mother, Dorothy “Dottie” Sedgwick. The daughter of a diplomat, Dottie was a gorgeous, young socialite, fresh out of Sarah Lawrence, who had just been named to Look magazine’s best-dressed list. What intrigued my father the most, though, wasn’t her beauty or style but her poise and worldliness. She seemed so much older than her nineteen years, and after overhearing snippets of a conversation she was having with Queen Juliana of the Netherlands, he was smitten.

Later that evening, he asked her to dance, and the two hit it off, talking and laughing as he twirled her all over the White House ballroom. The following morning, The Washington Post ran their photo in the lifestyle section, along with a description of my father’s finely tailored ivory dinner jacket and my mother’s powder-­blue chiffon gown. The society pages followed every move of their ensuing courtship, and by the time they were engaged a year later, Joe and Dottie were household names. America’s sweethearts.

A lavish wedding was planned in the Hamptons, but the Korean War put things on hold, as my father returned to combat. From the cockpit of his F-­86 Sabre, Captain Kingsley would down six enemy aircraft, becoming one of only two navy aviators to achieve ace status, before returning home to marry Dottie in the summer of 1954. Their wedding was the social event of the year, solidifying my mother as a fashion icon. Women everywhere, including Audrey Hepburn, emulated her tea-­length wedding dress, paired with elbow-­length gloves.

Shortly thereafter, my father announced his bid for New York’s junior Senate seat. He ran as a Democrat but garnered vast bipartisan support and won the election handily, becoming a rising political star. My grandmother was thrilled and my mother relieved, believing that politics would keep her husband out of harm’s way. For several golden years, they were happy, splitting their time between Georgetown, New York City, and Southampton.

But in the fall of 1957, just as my parents were planning to start a family, Sputnik 1 ushered in the Space Race, and my father grew restless, dreaming of flight. My mother begged him to stay the safer course, but my father had an iron will, and eventually he left the Senate for NASA, the agency he had helped create. Anyone alive at that time knows that astronauts were larger-­than-­life figures, revered as America’s greatest heroes in a global conflict between democracy and communism. The ultimate goal, as President Kennedy proclaimed before a joint session of Congress, was “landing a man on the moon and returning him safely to the Earth.” It seemed an impossible dream to most, but not to my father and his cohorts in the early days at Cape Canaveral.

Emily Giffin is the author of ten internationally bestselling novels: Something Borrowed, Something Blue, Baby Proof, Love the One You’re With, Heart of the Matter, Where We Belong, The One & Only, First Comes Love, All We Ever Wanted, and The Lies That Bind. She lives in Atlanta with her husband and three children. 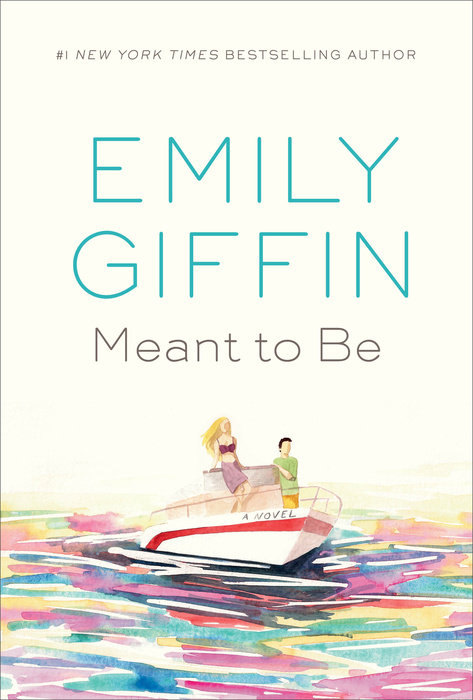