A Concert of Civilizations at the End of the Modern Age

“[An] elegantly layered exploration of Europe’s past and future . . . a multifaceted masterpiece.”—The Wall Street Journal

“A lovely, personal journey around the Adriatic, in which Robert Kaplan revisits places and peoples he first encountered decades ago.”—Peter Frankopan, author of The Silk Roads

ONE OF THE BEST BOOKS OF THE YEAR: The New Yorker

In this insightful travelogue, Robert D. Kaplan, geopolitical expert and bestselling author of Balkan Ghosts and The Revenge of Geography, turns his perceptive eye to a region that for centuries has been a meeting point of cultures, trade, and ideas. He undertakes a journey around the Adriatic Sea, through Italy, Slovenia, Croatia, Montenegro, Albania, and Greece, to reveal that far more is happening in the region than most news stories let on. Often overlooked, the Adriatic is in fact at the center of the most significant challenges of our time, including the rise of populist politics, the refugee crisis, and battles over the control of energy resources. And it is once again becoming a global trading hub that will determine Europe’s relationship with the rest of the world as China and Russia compete for dominance in its ports.

Kaplan explores how the region has changed over his three decades of observing it as a journalist. He finds that to understand both the historical and contemporary Adriatic is to gain a window on the future of Europe as a whole, and he unearths a stark truth: The era of populism is an epiphenomenon—a symptom of the age of nationalism coming to an end. Instead, the continent is returning to alignments of the early modern era as distinctions between East and West meet and break down within the Adriatic countries and ultimately throughout Europe.

With a brilliant cross-pollination of history, literature, art, architecture, and current events, in Adriatic, Kaplan demonstrates that this unique region that exists at the intersection of civilizations holds revelatory truths for the future of global affairs.

An excerpt from Adriatic

Never does Europe’s pagan inheritance seem so sure of itself as at the entrance to this Christian church. The piazza, polished and lonely in the downpour, is dramatically reduced by a line of other buildings directly at my back. The longer I look, the more extraordinary the church becomes. Between the massive columns mounted on a high stylobate ledge are blind arcades guarding, in turn, a confidently deep triangular pediment. And within that triangular pediment is a lintel that anchors the whole facade. Form and proportion take over. In classical architecture, beauty is mathematical and equates with perfection.

Passing through the door, rather than a warm and embracing candlelit darkness, there is a shivery, pounding silence and the perpetual late afternoon light of an overcast day. I feel like ducking under the clouds. The loud echo of another pair of footsteps every few minutes reinforces my loneliness. A yawning marble floor overwhelms the meager rows of benches approaching the apse (rebuilt after the World War II bombing). The longer I sit here, the more vast and spare the marble becomes. The iron cold begins its assault.

Instead of experiencing the splendor of egg tempera and oil, I am aware of the white limestone clarity of an archaeological ruin: one reconstructed by the early Renaissance. Rather than color, force and volume emanate from the flattened and compressed reliefs. The feast of limestone sculptures in the side chapels takes possession of me. Because of the limestone, these crowded and intricate figures, despite their energy, expressiveness, and flowing movement, achieve an abstract and theoretical intensity. This is art that makes you think as well as feel. I am not seeing just the art—I am seeing a path back to antiquity by way of late medieval city-states, in which communal survival left little room for conventional morality. For beauty can often emerge from the celebration of power, making it a register of Europe’s past, present, and future.

The fat, swollen putti are all in a frenzy to no purpose: they celebrate the primal urge to life. The sculptor has represented them as sexuality incarnate. The reliefs emerge out of the gloom, all the more extraordinary because of the inadequate lighting in the side chapels. Though the figures are pressed into the wall, their partially robed musculatures burst forth in three dimensions with only minimal carving by the sculptor, like poems that reveal whole universes with only a few words. Between the pilasters, along with the angels there are the Roman gods, the signs of the zodiac, and the exalted humanized symbols of the arts: philosophy, history, rhetoric, and music. Here Christianity is merely the final element of an accrued and vibrant civilization.

Nothing concentrates the mind like semi-darkness and cold. These monastic surroundings give me much to think about, and the memory of many books to consider before I begin my journey in earnest. Outside, the sky is slammed shut, as rain hammers the seaboard and clouds almost touch the water, like ink streaking down a canvas.

My path to this church—this temple, really—has been labyrinthine, in which memorable landscapes have led me to various historians and writers, and those historians and writers to more such. I must reference them all because they are part of the story, as well as beautiful in their own right.

It all began over four decades ago at Mistra, a ruined medieval city located on a spur of the Taygetus at the edge of the Eurotas Valley, in Greece’s southern Peloponnese. It was at Mistra where Byzantium finally expired. In Mistra, because of political unrest in far-off Constantinople, the Serbo-Greek Constantine XI Dragases was crowned in 1449, last of the eighty-eight Byzantine emperors and last heir to Caesar Augustus in Rome.

Mistra, on that first visit of mine in 1978, though it was spring, seemed arrested in late autumn, its broken walls and vegetation reduced to every brown and ocher shade. The most exquisite landscapes are the subtlest: they drain you, fatigue you utterly, rather than overwhelm. And thus I became obsessed with Mistra’s ruins and its history. Its beauty was such that I thought everything about the place was worth knowing about.

My obsession with Mistra led to an enduring interest in its most important figure, the Neoplatonist philosopher who lived in the fourteenth and fifteenth centuries, Georgios Gemistos Plethon. Plethon was a kindler of the Italian Renaissance because of his scholarly dedication to classical antiquity, something much in evidence during an extended visit he made to Florence in 1439, when he impressed none other than Cosimo de’ Medici. As the late British philosopher and translator Philip Sherrard explains, whereas Aristotle had already been assimilated into (or at least neutralized by) a “universal Christian consciousness,” Plato’s beliefs lay outside the Orthodox Christian establishment of the day, and thus Plato was seen by Plethon and others as the more pagan of the two philosophers. As the Byzantine world was dying, Plethon knew that Byzantium’s “one great asset,” in the words of another late Briton, the medievalist Steven Runciman, was how it “had preserved unadulterated the learning and literature of ancient Greece.” Plethon carried that preserved wisdom with him to Italy. Thus, Plethon helped foment a Greek national resurgence, built on this classical legacy of pantheism embedded in Byzantium, in the face of a political and religious assault from the Latin West. Incorporating Plato, as the quintessence of ancient Greece, into the world of the Greek Orthodox Church enabled this process.

This had all remained deeply embedded in my memory for decades on end when, in 2002, almost a quarter century after I first visited Mistra, I found myself in another part of the Peloponnese, at the villa of the British travel writer Patrick Leigh Fermor—the thrilling prospect of the Messinian Gulf and gnarled olive groves available through the arched windows as we talked. It was a cold spring day and Leigh Fermor’s clothes reeked deliciously of smoking logs. We had been drinking a decanted liter of homemade retsina when I happened to mention Gemistos Plethon. Leigh Fermor’s eyes flashed and he regaled me with a low-voiced disquisition, barely rising above a mumble, of how Plethon’s remains had been exhumed in 1465, thirteen years after his death, when Sigismondo Malatesta, the ancestral ruler of Rimini and mercenary commander of a Venetian expeditionary force, held the lower town of Mistra and refused to withdraw ahead of an advancing Ottoman army without first claiming the body of his favorite philosopher. Leigh Fermor’s voice was about to expire when he explained that Malatesta, a discriminating patron of the arts and philosophy, reburied Plethon in a sarcophagus in an outer wall of his Tempio Malatestiano in Rimini: the temple where I now sit.

Sigismondo Pandolfo Malatesta (1417–1468) was the scion of a feudal family that ruled over the city-state of Rimini from the late thirteenth century to the beginning of the sixteenth. Malatesta was a condottiere, that is, a mercenary captain, because he operated according to a contract, a condotta. The ultimate man of action, he literally lived for years on end under a sentence of death in one form or another, as he sold his truly remarkable military skills to one city-state after the next, and in the end lost most of his own city-state of Rimini in the bargain. His image was publicly burnt in Rome. The popes were after his lands, the Medici bank after his money, and yet in spite of his constantly changing alliances and his weakness against the great powers of the papacy, Venice, and Milan—despite defeat, disgrace, and betrayals (as well as triumphs)—Malatesta managed to transform this Franciscan Gothic church into one of the most arresting of Renaissance temples, filled with bas-reliefs of pagan gods, in order only to glorify himself and his longtime mistress and later wife, Isotta degli Atti. Malatesta was an eruption of life in its most elemental and primitive form: someone who, as several historians have suggested, was without conventional morals, yet came armed with unlimited supplies of energy and heroism. I think of the portrait of Malatesta executed by Piero della Francesca in 1450, which hangs in the Louvre: with the amazingly aquiline nose, the stingy lips, and the implacable and contemptuous eyes.

It was not only Mistra and Patrick Leigh Fermor that led me here to the Tempio Malatestiano: there was also The Cantos of Ezra Pound. Pound’s poetry, much of which is not very good, is like an obscure tunnel that leads into the daylight to offer nothing less than a larger contemplation of Europe.

Robert D. Kaplan is the bestselling author of twenty books on foreign affairs and travel translated into many languages, including Adriatic, The Good American, The Revenge of Geography, Asia’s Cauldron, Monsoon, The Coming Anarchy, and Balkan Ghosts. He holds the Robert Strausz-Hupé Chair in Geopolitics at the Foreign Policy Research Institute. For three decades he reported on foreign affairs for The Atlantic. He was a member of the Pentagon’s Defense Policy Board and the U.S. Navy’s Executive Panel. Foreign Policy magazine twice named him one of the world’s “Top 100 Global Thinkers.”

A Concert of Civilizations at the End of the Modern Age 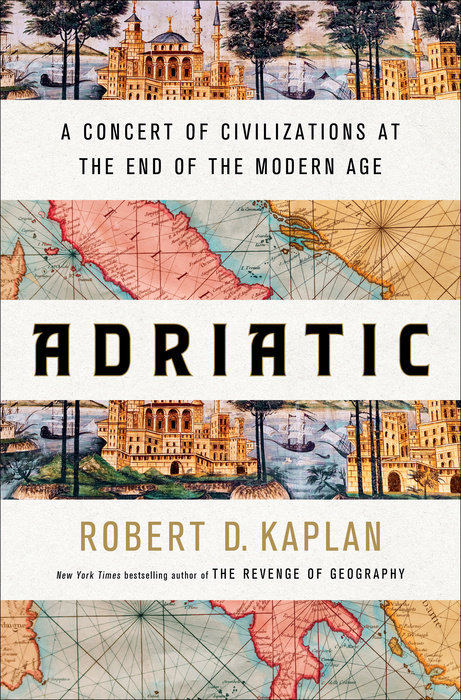