The brand-new official Minecraft novel is an epic battle for survival! When humans enter the End, a pair of endermen must decide which side they’re really on.

For as long as they can remember, the twin endermen Fin and Mo have lived in the mysterious land of the End. On the outskirts of the great enderman city of Telos, they explore ancient ruins under the watchful gaze of the mighty ender dragon. They have everything they need in the end ship they call home, and know everything there is to know about their world—or so they think until the strangers from another dimension arrive.

The invaders are called humans, and they’ve come to steal artifacts and slay the ender dragon. Fin and Mo are ready to protect their home from the trespassers, but when they come face-to-face with the humans, they discover that they aren’t as prepared for battle as they’d thought. Caught off guard, the twins are trapped in the middle of a war between the endermen and the humans, with the future of their home at stake.

An excerpt from Minecraft: The End

You and Me and Us and Them

But that does not mean there is no such thing as time. Or light. Ring after ring of pale yellow islands glow in the darkness, floating in the endless night. Violet trees and violet towers twist up out of the earth and into the blank sky. Trees full of fruit, towers full of rooms. White crystal rods stand like candles at the corners of the tower roofs and balconies, shining through the shadows. Sprawling, ancient, quiet cities full of these towers glitter all along the archipelago, purple and yellow like everything else in this place. Beside them float great ships with tall masts. Below them yawns a black and bottomless void.

It is a beautiful place. And it is not empty.

The islands are full of endermen, their long, slender black limbs moving over little yellow hills and little yellow valleys. Their narrow purple-and-pink eyes flash. Their thin black arms swing to the rhythm of a soft, whispering music, plotting their plots and scheming their schemes in the tall, twisted buildings older than even the idea of a clock. They watch everything. They say nothing.

Shulkers hide in boxes nestled in ships and towers. Little yellow-green slugs hiding from outsiders. Sometimes they peek out. But they snap their boxes safely shut again, like clams in their shells. The gentle thudding sound of their cubes opening and closing is the heartbeat of the End.

And on the central and largest island, enormous obsidian towers surround a small pillar of grey stone ringed with torches. A brilliant lantern gleams from the top of each tower. A flame in a silver cage, shooting beams of light down from the towers into the grass, across a little grey courtyard, and out into the black sky.

Above it all, something slowly circles. Something huge. Something with wings. Something that never tires. Round and round it goes, and its purple eyes glow like furious fire.

The word came zinging through the shade off the shore of one of the outer islands. A huge end city loomed over most of the land: Telos. Telos sprouted out of the island highlands like something alive. Great pagodas and pavilions everywhere. White shimmers fell from the glistening end rods. Shulkers clapped in their little boxes. Leashed to Telos like a dog floated a grand purple ship. A pirate ship without an ocean to sail. Most of the end cities had ships attached to them. No one was certain why, any more than they’re certain who built all those big, strange cities in the first place. Not the endermen, though they were happy to name every place after themselves. Not the thing flying in endless circles around a gate to nowhere. Not the shulkers who never came out of hiding long enough to learn anything about anything. The end ships just were, as the cities just were, as the End just was, like clouds or diamonds or Tuesdays.

A skinny young enderman teleported quickly across the island, in and out of the nooks and crannies of Telos. He blinked off in one place and back on in another until he stood on the deck of the end ship, holding something in his arms. His head was handsome, black and square. His eyes were bright and hungry. His limbs were slim but strong. An enderman leaned against the mast, waiting for him. She crossed her dark arms across her thin chest.

Naw, the enderman thought loudly. The words just appeared in the other enderman’s mind. Endermen had no need for mouths or ears. No need for sound. Telepathy was so much easier than talking. You just thought at somebody and they understood you.

Nothing good, Mo. Just a bunch of pearls. We’ve got tons of those. Ugh. You take them. They give me the creeps. I was sure the chestplates we found last week would regen by now but I guess somebody else got there first. I got some redstone ore. That’s about it. You go next time. You always sniff out the good stuff.

The twin twelve-year-old endermen, brother and sister, Fin and Mo, headed down into the guts of their ship. Fin was technically three minutes older, but he didn’t make a big deal out of it. Things like who was older and who wasn’t smacked of rankings, of structure, of Order—and Order wasn’t welcome in the End.

They’d always lived here. They couldn’t remember any other place. They grew up here. It was their home. No different from any of the hundreds of endermen you’d find on any island in the archipelago. They lived on an end ship crammed with junk they’d snatched up from anywhere they could find it. Some of it was very good junk. Diamonds and emeralds, gold ore and lapis lazuli. Enchanted iron leggings, pickaxes of every kind, beetroot seeds and chorus fruits, saddles and horse armor (though they’d never seen a horse). Dozens of sets of marvelous grey wings you could stick right on your back and fly around anywhere you liked. Some of it was just plain old actual junk. Rocks and clay and sand and old books with broken spines. Fin and Mo didn’t care. They were scavengers, and scavengers weren’t picky. You never knew when you could really use some good old-fashioned clay.

The twin endermen knew there were other worlds out there. It was only logical when you lived in a place called the End. If there was an End, there had to be a Beginning. Somewhere else for this place to be the End of. Somewhere the opposite of here. Green and bright, with blue skies and blue water, full of sheep and pigs and bees and squid. Other endermen went there all the time. They’d heard the stories. But this was their world. They were safe here, with their own things and their own kind.

Fin and Mo’s treasure piled up to the ceiling of the hold. The twins picked their way through their collection carefully. They’d done it a thousand times. There was a well-worn path through the boots and swords and helmets and dragon heads and ingots. Little spaces hollowed out for sitting and eating and living.

Hiya, Grumpo, Mo thought cheerfully at the shulker in his box on the far wall. He’d always been there, just like them. They’d never been able to get rid of him, even though they really could have used his spot for more loot. If they whacked on his box until it fell apart, it just came back the next day. Eventually, they’d just given up and accepted him. Gave him a name. Let him guard the junkship some days. You never knew when someone might try to raid your ship. When you had this much loot in one place, you had to stay sharp. Grumpo didn’t really guard it so much as just sat there hating everything, like he always did, but it made them feel safer. He wasn’t just a shulker. He was their shulker.

If it was a him. They never wanted to pry. They respected the shulker’s personal space.

Hiya, Grumpo thought back. He peeked out of his box. They caught a glimpse of his yellow-green head. I hate you.

I’m not, snapped Grumpo. I want to bite you.

Are so! thought Mo. WHO’S A GOOD BOY?

The shulker grumbled to himself and shut his box again. His last thought appeared in their heads, the letters very small and angry. I’m a bad boy. I’ll bite you tomorrow, you’ll see.

Mo and Fin dug out a basket of chorus fruits from behind a couple of blocks of ore. They divided them equally for lunch. Everything between them was equal. Very carefully, very deliberately, almost militantly equal. The twins worked quietly and happily, side by side, and packed up their meal to take with them.

I hate the ship, complained Grumpo, without opening his box. I hate you. I hate ED. I hate your stuff.

Fin and Mo teleported out onto the deck of the end ship. The black sky looked so pretty, with the city sparkling nearby. But they weren’t headed to the city. They blinked in and out of sight as they teleported across the island chain. Their ender pearls glowed hot with each jump.

In a moment or two, they’d reached the central island. Crowds of endermen moved between the obsidian towers. Beams of light from the caged lanterns shot out into the dark.

Greetings, Hubunit Paa, Fin thought to a tall elderly enderman they often saw out here. All hail the Great Chaos!

May the Great Chaos smile upon you, juvenile male, Paa replied solemnly. It was the traditional answer. All endermen worshipped the Great Chaos. The universe was divided into Chaos and Order. Overworlders believed in Order, but endermen knew it was a lie. Always and forever a lie. The biggest lie ever told. In the Overworld, people believed you could build a fortress strong enough to keep anything out. That you could actually make something perfect. Something that would last. Only endermen, servants of the Great Chaos, seemed to understand that this was folly. It was their holy duty to prove it. Life was so much better when you understood the truth: Anything could happen, anytime, to anyone and anything. The Great Chaos came for everyone sooner or later. It would come for the whole universe someday. The endermen’s duty was to help it along any way they could. The holiest pilgrimage an enderman could make was to journey to the Overworld, witness the constructions of the Forces of Order, and sabotage them. Remove one block from a cozy house and the Great Chaos’s work could begin. Rain or fire could fall through the roof. Creepers could sneak through a hole in the foundation. Thieves could crawl through and clean you out. Order was so boring. Wasn’t life so much more interesting once you let the Chaos in?

Catherynne M. Valente is the New York Times bestselling author of dozens of works of science fiction and fantasy including Space Opera, The Refrigerator Monologues, and the Fairyland series. She has won or been nominated for every award in her field. She lives on an island off the coast of Maine with her partner, her son, and several other mischievous beasts. 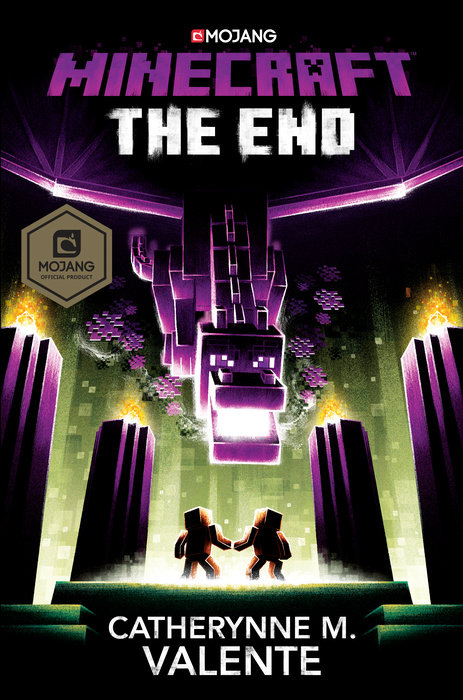