All the Words You Thought You Knew the Meaning Of

There’s no such thing as too much redneck. And it’s easy to understand why. A veritable gumbo of indigenous ingenuity, this deliciously distinct dialect rolls off the tongue like drool in the presence of a barbecue sandwich. Now, just in time for no time in particular, Jeff Foxworthy’s three bestsellers are rolled into one hilarious redneck reference. This practical, portable A-to-Z crash course will have you laughing and learning your way to flawless southern slang. Say after me:

tor • toise (tort´-es), v. and n. to have imparted knowledge or wisdom to a group. “That stupid teacher never tortoise nothin’. ”

Whether you’re a newbie looking to connect with your inner redneck or a seasoned pro hoping to sharpen your skills, The Complete Redneck Dictionary is the only reference you’ll ever need. Picking up Redneck (and this book) has never been easier.

abil•i•ties (Ə-bil′-Ət-ēz), n. and pron. a statement of charges for services rendered and subsequent action to be taken by a specified male person. “I don’t care if he’s broke, Ma, the house payment’s abilities got to pay.”

ac•cus•tom (Ə-kes′-tem), n. and v. to have verbally abused more than one person with profanity. “Them kids kept swearin’ around Mamaw, so accustom out.”

ac•ne (ak′-nē), v. and n. concerning a male person’s behavior and the result of that behavior. “Once again we took him to a fancy restaurant, and he didn’t know how to acne made a fool of himself.”

ac•quire (Ə-kwīer′), n. a group of singers, especially those who perform during religious ceremonies. “She sings so pretty, she should join acquire.”

ac•quit (Ə-kwit′), n. and v. a personal declaration of resignation from an assigned task. “You ain’t firin’ me, ’cuz acquit!”

ac•tiv•ist (akt′-Əv-ist), v. and conj. to behave in a certain manner, particularly one based on another reality. “She seduced me into signing that petition, and now she activist she don’t know me!”

ad•e•quate (a′-dƏ-kwit), n. and v. to have acted with the intention of terminating one’s condition of employment. “Adequate if they hadn’t given me a raise.”

ad•min•is•ter (at-mi′-nƏ-ster), adj. and n. a specific clergyman or agent of a government, as designated by the observer. “I tell ya, administer is a good man.”

afar (Ə-fär′), n. an object in the state of combustion. “There’s no sense bein’ this cold—let’s build afar.”

af•ford (Ə-frd′), n. an automobile manufactured by the motor company that produced the Model T. “If I had the money for a car, I’d want to buy afford.”

Af•ghan•i•stan (af-gan′-is-stan), n. and v. to declare that a certain living organism of Afghani origin has the name Stanley. “The Dalmatian’s called Jerry, but the Afghanistan.”

agent (ā′-jent), n. and v. to negate the importance of the length of a thing’s existence. “She may be eighty, but if I’m drunk enough, agent make no difference to me.”

air•line (er′-līn), adv. and v. concerning the location and dishonesty of the person being addressed or discussed. “Don’t sit airline about it, boy … tell the truth!”

Alas•ka (el-ask′-Ə), n. and v. to resolve to make an inquiry. “If I wanna know where to find a polar bear, Alaska guy who lives here.”

al•i•bi (al′-Ə-bī), n. and v. the predicted future purchases by a male named Albert, Alfred, or Alvin. “We always invite Al, ’cause alibi drinks for everybody.”

al•lo•sau•rus (a′-le-sr′-Əs), n. and v. to have been visually perceived by someone named Alice. “I think my wife allosaurus go into that motel room together.”

al•lowed (Ə-la′), adj. distinguished by an intense elevation of volume. “Did you just hear allowed noise?”

al•lure (Ə-lr′), n. an object used for enticement, with the intention of capturing prey. “You want to catch a fish, you gotta use allure.”

an•a•con•da (an-Ə-kän′-de), n. and v. to have swindled by gaining the confidence of the victim. “I robbed a bank, stole a car, anaconda old lady out of her life savings.”

an•noys (Ə-niz′), n. a loud or irritating sound. “Well, I wouldn’t’ve peed my pants if I hadn’t heard annoys!”

an•nu•al (an′-yü-Əl), n. and v. regarding the prediction of an action. “Buy this here Porsche annual be dating a lot of ladies.”

an•te•lope (ant′-Ə-lōp), n. and v. the female sibling of one’s parent escaping, with the intention of betrothal. “Sure it’s cool to help yer antelope, but it ain’t cool if she’s gettin’ hitched to you.”

an•ti•pas•to (an′-tē-past-Ə), n. and v. to discharge from the body, as done by the female sibling of a parent of the speaker. “After eatin’ all that salami last night, my antipasto kidney stone.”

aor•ta (ā-r′-te), n. and v. involving a suggestion for action. “Aorta tear that house down and start over.”

apart•ment (Ə-pärt′-ment), adv. and v. pertaining to one’s feelings about a separation. “Our time together was real good, but the time we were apartment a lot more to me.”

ap•par•el (Ə-per′-Əl), n. and v. a prediction concerning the future of two things. “When it comes to shoes, apparel look better than just the one.”

ap•par•ent (Ə-per′-Ənt), n. one who sires or gives birth to offspring. “It’s obvious to me from lookin’ at yer belly that yer gonna be apparent.”

ap•peal (Ə-pēl′), n. medicine in a form for oral ingestion. “I’m sorry, sir, this is not appeal you swallow. It’s the kind you take rectally.”

ar•chery (ärch′-Ər-ē), n. and conj. a male person’s ultimatum relating to a curved structure, usually one that serves as the roof or overhang of a passageway. “He went off to St. Louis, sayin’ he was dang sure he was goin’ to see the archery weren’t coming back.”

Ar•i•zo•na (er′-Əz-ōn-Ə), n., v., and adv. phrase delimiting the quality of the gaseous atmosphere surrounding the earth. “I’d move to Denver, but with all the smog that Arizona slightly better than it is here in L.A.”

Ar•kan•sas (ärk′-Ən-s), n. and v. a flat-bottomed boat in conjunction with an observer’s visual perception. “Noah finished the Arkansas that it was good.”

Ar•ma•ged•don (ärm-Ə-ge′-din), n. and v. putting oneself in a position for action. “I tell ya, if it gets any crazier, Armageddon outta here.”

ar•ma•ture (är′-me-chr), v. and adj. displaying exceptional wisdom, experience, and/or age. “I know sometimes I acts like a kid but I really armature.”

ar•rest (Ə-rest′), n. a state of minimal activity. “I want the cops to lock me up ’cause, frankly, I could use arrest.”

ar•son (ar′-sen), adj. and n. pertaining to the male offspring of the speaker. “I know I swore arson didn’t set fire to your car, Sheriff, but I guess I misspoke.”

as•cent (Ə-sent′), n. and v. to have personally dispatched. “Please don’t turn off my phone, dude … I swear ascent that check three weeks ago!”

as•i•nine (as′-Ə-nīn), n. favorable praise of the hind end, to the positive ninth integer. “Man, I would give her face a two and her asinine.”

as•par•a•gus (Ə-sper′-Ə-ges), n. ambivalence about having to install a replacement for an air-filled rubber wheel. “I got a flat, so I’m gonna have to put on asparagus.”

as•pect (as′-pekt), n. and v. having one’s backside assaulted by a sharp object. “He got done skinny-dippin’, passed out on that deck chair, and had his aspect by a woodpecker.”

asth•ma (az′-me), v. to make an inquiry to a person of familiar acquaintance. “I don’t know if I can go or not. Lemme asthma wife.”

asun•der (es-Ən′-der), n. and prep. a gluteal mass situated below or beneath. “You’ll need a tarp-sized blanket to get all of her asunder it.”

at•mo•sphere (et′-mes-fir), pron. and v. a conjecture about the feelings of anxiety of a certain being. “The way that ol’ Red tucks his tail, now, that’s a dog atmosphere his owner.”

at•om (at′-Əm), prep. and n. in the direction of something or someone. “Two deer jumped outta the woods and we just started shootin’ atom.”

at•tacks (Ə-taks′), n. a percentage of one’s assets taken annually by a governing body. “If you let ’em, I swear the government would put attacks on the air.”

at•tract (Ə-trakt′), v. to have followed. “I must attract that deer for six miles before I gave up.”

Au•di (a′-dē), n. a protrusion; usually used to describe the knotted flesh on the stomach of a human left after the severing of the umbilical cord. “Most people have an ‘innie,’ but Roy’s belly button is definitely an Audi.”

au•ra (r′-Ə), conj. and adj. a phrase indicating a choice between one thing and another. “You gettin’ a Quarter Pounder aura Big Mac?”

au•to•mate (′-te-māt), v. a suggestion for procreation. “I know we just met tonight, baby, but I think we automate.”

av•e•nue (av′-Ə-nü), n. and v. to declare possession of something recently acquired. “Avenue address, but I don’t remember it.”

aw•ful (-fel′), adv. and adj. satiated gastronomically. “No dessert for me, thanks, I’m awful.”

Jeff Foxworthy is the largest-selling comedy-recording artist in history, a multiple Grammy Award nominee, and the bestselling author of more than 26 books, including his Redneck Dictionaries. He is the host of the Fox television series Are You Smarter Than a 5th Grader? Jeff also starred in all three Blue Collar Comedy Tour movies, which have sold more than 8 million copies and are some of the highest-rated movies in Comedy Central history. His syndicated weekly radio show, The Foxworthy Countdown, is carried in more than 220 markets across the United States. A Georgia native, Jeff lives with his wife and two daughters in Atlanta.

All the Words You Thought You Knew the Meaning Of 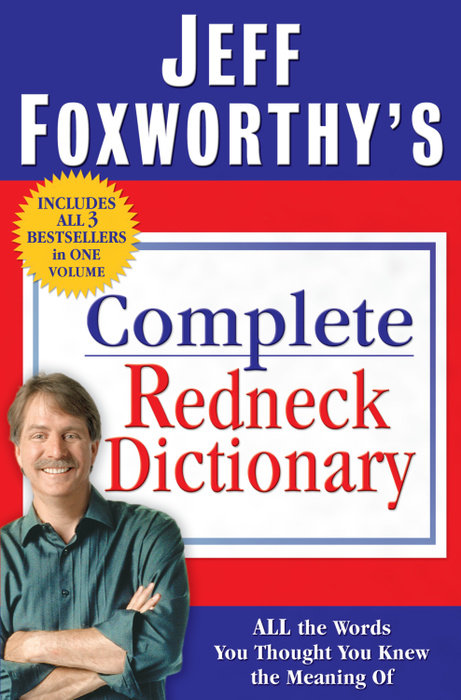