A Mother's Journey into the Science of Attachment

A full-scale investigation of the controversial and often misunderstood science of attachment theory, inspired by the author’s own experience as a parent and daughter.

When professional researcher and writer Bethany Saltman gave birth to her daughter, Azalea, she loved her deeply but felt as if something was missing. Looking back at her lonely childhood, dangerous teenage years, and love-addicted early adulthood, Saltman thought maybe she was broken.

Then she discovered the science of attachment, the field of psychology that explores the question of why—from an evolutionary point of view—love exists between parents and children. Saltman went on a ten-year journey visiting labs, archives, and training sessions, while learning the meaning of “delight” from Mary Ainsworth, one of psychology’s most important but unsung researchers, who died in 1999.

Saltman went deep into the history and findings from Ainsworth’s famous laboratory procedure, the Strange Situation, which, like an X-ray, is still used today by scientists around the world to catch a glimpse of the internal workings of attachment. In this simple twenty-minute procedure, a baby and a caregiver enter an ordinary room with two chairs and some toys. During a series of comings and goings, a trained observer studies the minutiae of the pair’s back-and-forth with each other.

Through the science of attachment, what Saltman discovered was a radical departure from everything she thought she knew—about love and about her own family, her story, and herself. She was far from broken—she saw that love is too powerful to ever break.

Strange Situation is a scientific, lyrical, life-affirming exploration of love. Not only will readers be taken on an emotional ride through one mother’s reckoning with her own past and her family’s future, but they will also be given the tools with which to better understand their own life histories and their relationships today.

“A fascinating deep dive into attachment theory . . . Carefully researched and with copious endnotes, this is an excellent resource for anyone interested in child development.”—Publishers Weekly

“Honest and complex . . . A thoughtful engagement with a topic that affects all parents.”—Kirkus Reviews

An excerpt from Strange Situation

In 2005, I lay in bed beneath the Christmas lights in the loft of our little house in the Catskills, The Baby Book propped against my giant round belly. This encyclopedic volume by Dr. William Sears and his wife, Martha, a nurse, is the seminal guide to what they call “attachment parenting,” the controversial approach to raising kids that encourages mothers to breastfeed, co-­sleep, wear their babies in a sling, and engage in what they call the “Seven Baby B’s of Attachment Parenting,” all designed in response to an infant’s innate need to be close. That made good sense to me, though I knew that many people felt some resistance to this method, especially the fact that it seemed to ask an awful lot of parents and particularly women.

I, however, welcomed the Searses’ invitation to wholehearted—­though some said over-­the-­top—­parenting and their insistence that “when a hungry or an upset baby cries, he cries to be fed or comforted, not to control.” And they made it sound so simple: “All parents, especially mothers, have a built-­in intuitive system with which they listen and respond to the cues of their baby.” What would it be like to listen to my baby’s cries? I wondered. Would I sink into this magic realm of knowing what to do? I had heard so many stories about colicky babies and tantruming toddlers and parents losing their shit. And I had seen that mom in the grocery store, the one who ignored her crying child. I thought, Just pick the kid up! How hard can it be?

While Dr. Sears says that attachment is an “intuitive system,” the technical term is a “set goal” behavioral system, and, as I have come to understand, we all have it, not “especially mothers.” Caregiving, attachment, sexuality, affiliation, fear—­these are called set-­goal behavioral systems. We are all equipped with these whole body/mind organizations that kick in when needed to work tirelessly until they reach their goal. When we lose track of our child in Target, there will never come a moment when we say, Oh well, now that my kid’s disappeared I get to sleep in on the weekends, and give up the search. Likewise, there will never come a time when our lost child settles in among the school supplies or wanders off with a stranger, never looking back. Attachment works like fear, which, once ignited, never stops until the threat is gone, or like a state of sexual arousal, which won’t rest just because we want it to.

When Azalea was seven years old, she and Thayer were riding the chairlift up a mountain at our local ski area. Lost in a daydream, Azalea missed the spot where she and Thayer had planned to get off, leaving her on the lift without her dad, who had skied off the chair, only to discover with a start that Azalea was not right behind him. Realizing that she was alone and her beloved father was gone, rather than wait until she got back to the bottom of the mountain, the next safe place to get off, Azalea jumped! Falling ten feet through the air, luckily she landed safely on her skis. That’s the kind of commitment attachment inspires. That’s the kind of danger love incites.

Once we get riled up, like Azalea alone on the chairlift, the only thing that slows the caregiving and attachment systems’ primordial effort is reaching its set goal—­of togetherness, of safety, of intimate connection, of what researchers so tenderly call “felt security.” And when that goal isn’t reached, we keep searching for it. Forever.

Felt security. It’s not up to anyone but us to say when we get there.

Lying pregnant in the winter sun with our cats, the snowy mountain outside our bedroom window, I didn’t know any of that. It just felt good to imagine devoting myself to the needs of my unborn baby. It felt healing. After all, I knew the pain of feeling unloved. And something really resonated with me when I read from The Baby Book, “Studies have shown that infants who develop a secure attachment with their mothers during the first year are better able to tolerate separation from them when they are older.” A “secure attachment” sounded like something worth having, and I wondered if I had one. Thinking back to my own childhood, and with a quick scan of all the trouble I’d been in and caused, I figured probably not.

One of my earliest memories is of being in the kitchen with my mother and asking her a question. She was busy. I was not. It’s a posture that defines my childhood—­her back to me, her motion; my stillness. Her just going about my business stance; my something’s missing longing to be rescued from the pain of feeling alone in the house, unseen by my parents and shut out by my older brothers. My mom always said that being a mother was her true calling, which I found odd, since she really didn’t seem all that into it. Regardless of the insults or violence that rose up between my brothers and me—­their taunts sometimes led to physical aggression—­she watched from the sidelines, choosing to stay moving and focused on taking care of things instead of me. Even as a little girl climbing onto her lap, I often felt disappointed. Her distracted, stiff cuddle just didn’t satisfy me, and I would get down, still searching for something. As adults, my two brothers and I don’t see one another much, and we see eye to eye on even less, but one thing we can all agree on is that my mom was obsessed with housework, particularly vacuuming, and especially in the morning, when her house of teenagers was asleep. And we can even—sometimes—­chuckle about how she once told my brothers to go “clean up” the woods surrounding our house.

When I was pregnant, I was determined to be a warmer, more present, and more loving mom than mine had been. I had a feeling it might be tricky, since I also knew how much we tend to be just like our own parents. And in fact Azalea wouldn’t dream of eating in my new car, and she scrambles for the paper towels whenever she spills something. But there’s so much more to our relationship than cleaning up, I tell myself. And she doesn’t need protection, I tell myself. Not like I did.

“Hey, Beth, you’re ugly,” Sam, my oldest brother, reminded me one typical Saturday morning from his seat on the couch, wrapped in Grandma Beryl’s afghan, our cat Tasha curled in his lap. I was eight years old, though even today, at forty-­eight, I can hear his voice when I look in the mirror. I had just walked in from my room down the hall, looking for a place to sit, to settle, to be. No such luck. Matt, my middle brother, sat on the floor as they watched Abbott and Costello, the comedy duo. He hissed a laugh, like a balloon letting out air. We were all in our pajamas, our parents still asleep. Two empty cereal bowls sat on the coffee table, bathed in snow-­light.

I went to the kitchen and poured myself a bowl of cereal and sat at the snack bar alone, my throat tingling, tears starting to well up, yet again stirred by the familiar frustration, the pain of not finding my place. When my mom finally came into the kitchen in her robe and poured water into the coffeepot, tears started sliding down my cheeks.

“Just ignore them, honey,” she said, spooning coffee grounds into the filter.

Just then my dad walked in, wearing his bathrobe, his knees crackling. He sat down next to me and opened the paper, then lit a cigarette.

“It’ll make you tough,” he said, then exhaled a stream of smoke across the breakfast bar.

Growing up in a house with two older brothers who had their own demons to fight, and who weren’t the least bit interested in me, did make me tough. And guarded. And very angry. Though they were just kids themselves, they were bigger and stronger than I was, and they regularly, and sometimes viciously, told me how much they hated me. They harassed me at school, seeming to take pleasure in embarrassing me in front of my few friends. Their marked lack of interest was humiliating. What kind of person is rejected by her own brothers? Sometimes I worried there was something seriously wrong with me. The rest of the time I dreamt of beating them up, even though I didn’t stand a chance. So I turned to myself and fantasies of revenge, of a future when they would rue the day.

Bethany Saltman, a longtime Zen student, lives in a small town in the Catskills with her family. Strange Situation is her first book.

A Mother's Journey into the Science of Attachment 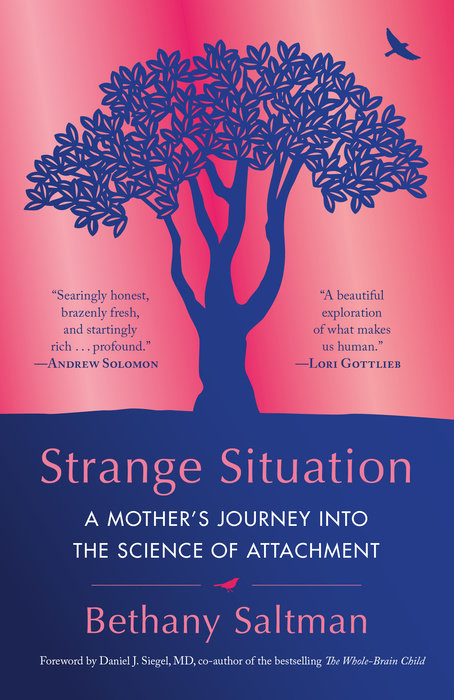