NEW YORK TIMES BESTSELLER • From the bestselling author of Dark Matter and the Wayward Pines trilogy comes a relentless thriller about time, identity, and memory—his most mind-boggling, irresistible work to date, and the inspiration for Shondaland’s upcoming Netflix film.

At first, it looks like a disease. An epidemic that spreads through no known means, driving its victims mad with memories of a life they never lived. But the force that’s sweeping the world is no pathogen. It’s just the first shock wave, unleashed by a stunning discovery—and what’s in jeopardy is not our minds but the very fabric of time itself.

In New York City, Detective Barry Sutton is closing in on the truth—and in a remote laboratory, neuroscientist Helena Smith is unaware that she alone holds the key to this mystery . . . and the tools for fighting back.

Together, Barry and Helena will have to confront their enemy—before they, and the world, are trapped in a loop of ever-growing chaos.

“An action-packed, brilliantly unique ride that had me up late and shirking responsibilities until I had devoured the last page . . . a fantastic read.”—Andy Weir, #1 New York Times bestselling author of The Martian

“Another profound science-fiction thriller. Crouch masterfully blends science and intrigue into the experience of what it means to be deeply human.”—Newsweek

“Definitely not one to forget when you’re packing for vacation . . . [Crouch] breathes fresh life into matters with a mix of heart, intelligence, and philosophical musings.”—Entertainment Weekly

“A trippy journey down memory lane . . . [Crouch’s] intelligence is an able match for the challenge he’s set of overcoming the structure of time itself.”—Time

“Wildly entertaining . . . another winning novel from an author at the top of his game.”—AV Club

An excerpt from Recursion

Barry Sutton pulls over into the fire lane at the main entrance of the Poe Building, an Art Deco tower glowing white in the illumination of its exterior sconces. He climbs out of his Crown Vic, rushes across the sidewalk, and pushes through the revolving door into the lobby.

The night watchman is standing by the bank of elevators, holding one open as Barry hurries toward him, his shoes echoing off the marble.

“What floor?” Barry asks as he steps into the elevator car.

“Forty-one. When you get up there, take a right and go all the way down the hall.”

“More cops will be here in a minute. Tell them I said to hang back until I give a signal.”

The elevator races upward, belying the age of the building around it, and Barry’s ears pop after a few seconds. When the doors finally part, he moves past a sign for a law firm. There’s a light on here and there, but the floor stands mostly dark. He runs along the carpet, passing silent offices, a conference room, a break room, a library. The hallway finally opens into a reception area that’s paired with the largest office.

In the dim light, the details are all in shades of gray. A sprawling mahogany desk buried under files and paperwork. A circular table covered in notepads and mugs of cold, bitter-smelling coffee. A wet bar stocked with expensive-looking bottles of scotch. A glowing aquarium that hums on the far side of the room and contains a small shark and several tropical fish.

As Barry approaches the French doors, he silences his phone and removes his shoes. Taking the handle, he eases the door open and slips out onto the terrace.

The surrounding skyscrapers of the Upper West Side look mystical in their luminous shrouds of fog. The noise of the city is loud and close--car horns ricocheting between the buildings and distant ambulances racing toward some other tragedy. The pinnacle of the Poe Building is less than fifty feet above—a crown of glass and steel and gothic masonry.

The woman sits fifteen feet away beside an eroding gargoyle, her back to Barry, her legs dangling over the edge.

He inches closer, the wet flagstones soaking through his socks. If he can get close enough without detection, he’ll drag her off the edge before she knows what--

“I smell your cologne,” she says without looking back.

She looks back at him, says, “Another step and I’m gone.”

It’s difficult to tell in the ambient light, but she appears to be in the vicinity of forty. She wears a dark blazer and matching skirt, and she must have been sitting out here for a while, because her hair has been flattened by the mist.

“Barry Sutton. I’m a detective in the Central Robbery Division of NYPD.”

“They sent someone from the Robbery—?”

“I happened to be closest. What’s your name?”

“Is there anyone I can call for you?”

She shakes her head.

“I’m going to step over here so you don’t have to keep straining your neck to look at me.”

Barry moves away from her at an angle that also brings him to the parapet, eight feet down from where she’s sitting. He glances once over the edge, his insides contracting.

“Aren’t you here to talk me off? Give it your best shot.”

He decided what he would say riding up in the elevator, recalling his suicide training. Now, squarely in the moment, he feels less confident. The only thing he’s sure of is that his feet are freezing.

“I know everything feels hopeless to you in this moment, but this is just a moment, and moments pass.”

Ann stares straight down the side of the building, four hundred feet to the street below, her palms flat against the stone that has been weathered by decades of acid rain. All she would have to do is push off. He suspects she’s walking herself through the motions, tiptoeing up to the thought of doing it. Amassing that final head of steam.

“I’m pretty sure you don’t want to come any closer, Detective.”

Barry resists the urge to run. Of course he’s heard of False Memory Syndrome, but he’s never known or met someone with the affliction. Never breathed the same air. He isn’t sure he should attempt to grab her now. Doesn’t even want to be this close. No, f*** that. If she moves to jump, he’ll try to save her, and if he contracts FMS in the process, so be it. That’s the risk you take becoming a cop.

“One morning, about a month ago, instead of my home in Middlebury, Vermont, I was suddenly in an apartment here in the city, with a stabbing pain in my head and a terrible nosebleed. At first, I had no idea where I was. Then I remembered . . . this life too. Here and now, I’m single, an investment banker, I live under my maiden name. But I have . . .”—she visibly braces herself against the emotion—“memories of my other life in Vermont. I was a mother to a nine-year-old boy named Sam. I ran a landscaping business with my husband, Joe Behrman. I was Ann Behrman. We were as happy as anyone has a right to be.”

“What does it feel like?” Barry asks, taking a clandestine step closer.

“Your false memories of this Vermont life.”

“I don’t just remember my wedding. I remember the fight over the design for the cake. I remember the smallest details of our home. Our son. Every moment of his birth. His laugh. The birthmark on his left cheek. His first day of school and how he didn’t want me to leave him. But when I try to picture Sam, he’s in black and white. There’s no color in his eyes. I tell myself they were blue. I only see black.

“All my memories from that life are in shades of gray, like film noir stills. They feel real, but they’re haunted, phantom memories.” She breaks down. “Everyone thinks FMS is just false memories of the big moments of your life, but what hurts so much more are the small ones. I don’t just remember my husband. I remember the smell of his breath in the morning when he rolled over and faced me in bed. How every time he got up before I did to brush his teeth, I knew he’d come back to bed and try to have sex. That’s the stuff that kills me. The tiniest, perfect details that make me know it happened.”

“What about this life?” Barry asks. “Isn’t it worth something to you?”

“Maybe some people get FMS and prefer their current memories to their false ones, but there’s nothing about this life I want. I’ve tried, for four long weeks. I can’t fake it anymore.” Tears carve trails through her eyeliner. “My son never existed. Do you get that? He’s just a beautiful misfire in my brain.”

Barry ventures another step toward her, but she catches him this time.

“You are not alone.”

“I’ve only known you a few minutes, and I will be devastated if you do this. Think about the people in your life who love you. Think how they’ll feel.”

“I tracked Joe down,” Ann says.

“My husband. He was living in a mansion out on Long Island. He acted like he didn’t recognize me, but I know he did. He had a whole other life. He was married--I don’t know to who. I don’t know if he had kids. He acted like I was crazy.”

“This hurts too much.”

“Look, I’ve been where you are. I’ve wanted to end everything. And I’m standing here right now telling you I’m glad I didn’t. I’m glad I had the strength to ride it out. This low point isn’t the book of your life. It’s just a chapter.”

“What happened to you?”

“I lost my daughter. Life has broken my heart too.”

Ann looks at the incandescent skyline. “Do you have photos of her? Do you still talk with people about her?”

“At least she once existed.”

There is simply nothing he can say to that.

Ann looks down through her legs again. She kicks off one of her pumps.

Then sends the other one plummeting after it.

“In my previous life, my false life, Joe’s first wife, Franny, jumped from this building, from this ledge actually, fifteen years ago. She had clinical depression. I know he blamed himself. Before I left his house on Long Island, I told Joe I was going to jump from the Poe Building tonight, just like Franny. It sounds silly and desperate, but I hoped he’d show up here tonight and save me. Like he failed to do for her. At first, I thought you might be him, but he never wore cologne.” She smiles—wistful—then adds, “I’m thirsty.”

Barry glances through the French doors and the dark office, sees two patrolmen standing at the ready by the reception desk. He looks back at Ann. “Then why don’t you climb down from there, and we’ll walk inside together and get you a glass of water.”

“Would you bring it to me out here?”

Her hands are shaking now, and he registers a sudden resolve in her eyes.

She looks at Barry. “This isn’t your fault,” she says. “It was always going to end this way.”

“My son has been erased.”

And with a casual grace, she eases herself off the edge.

Blake Crouch is a novelist and screenwriter. His novels include the New York Times bestseller Dark Matter and the international-betselling Wayward Pines trilogy, which was adapted into a teleivsion series for FOX. He also co-created the TNT show Good Behavior, based on his Letty Dobesh novellas. He lives in Colorado. 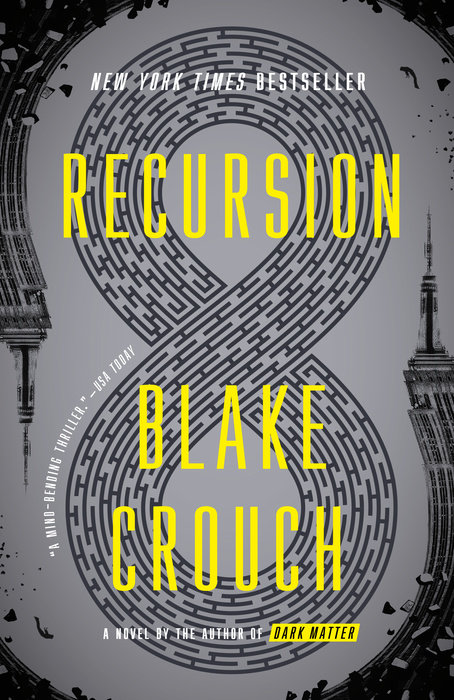