In ancient Egypt, Atticus agrees to raid a secret chamber underneath the library of Alexandria, dodging deadly traps, only to learn that on-site security includes two members of the Egyptian pantheon.

At a Kansas carnival, fun and games turn to murder and mayhem, thanks to soul-snatching demons and flesh-craving ghouls luring visitors into an all-too-real house of horrors.

In olde England, striking up a friendship with William Shakespeare lands both Atticus and the Bard in boiling hot water with a trio of infamous witches.

During the Gold Rush, the avatar of greed himself turns the streets of San Francisco red with blood and upsets the elemental Sequoia. Atticus may have to fight fire with fire if he’s going to restore balance.

More, you say? Indeed there is—including bogeymen, vampire hordes, wrathful wraiths, and even a journey to the realm of the dead. Prepare to be besieged with ten tantalizing tales—not to be missed, never to be forgotten.

An excerpt from Besieged

The Eye of Horus

Atticus shares this story early on during Granuaile’s training period, in between Tricked and the novella Two Ravens and One Crow.

I am often reminded how a small fire underneath a vast sky can bind people together like nothing else. For all that we are social creatures, we are too often shoved into solitary confinement by circumstance. The color of our skin isn’t like everyone else’s, or our language is different, or our religion isn’t the one that gets us invited to dinner by the neighbors. That last one has kept me alone for a long, long time. There are no more Druids walking the earth, unless you count the various neo-pagan versions, who are all operating on nineteenth-century reconstructions.

And despite the fact that I have an apprentice, I suspect she won’t be the same sort of Druid that I am—I mean believing in the old Irish gods as I do, paying them respect and offering them prayers, observing the holidays and the rites as the Irish used to do in the days before the invasion of the Christians. Gaia doesn’t require belief in any deity to be bound to her: She merely requires a highly trained mind and unswerving devotion to her protection. With Granuaile I think there is a willingness to see the divine, to acknowledge and appreciate both its wonder and terror, but a stubborn resistance to worshipping it.

But she liked staring into campfires well enough. Fires were warm cups of non-thinking serenity after the daily rigors of training. I had been exhausting her mentally with languages and headspace exercises and then physically with the martial arts. By the time the sun sank behind the baked sandstone cliffs of the Navajo Nation each day, she was ready to lose herself in the yellow and orange flickers of flame. And quiz me about my past.

“Ugh,” she said, flopping on the ground by our fire pit and popping open a bottle of beer with a hiss and clink as the top fell to the ground. “What a day. Wish I could just upload kung fu like Neo instead of learning it the slow way.” She leaned back against a rock padded with a bedroll and took a swig, winced at some ache or soreness in her muscles, then said, “Tell me about the old days, Atticus, when you were wee and had to walk both ways uphill in feces because no one had toilets.”

“You seriously want to hear about that?”

“Well, I’d like to hear about some old shit, but it doesn’t need to include actual shit, if that helps. I’m tired, damn it. Just tell me a story.”

Oberon said through our mental link. He was stretched out by the fire, lying across my feet, belly up for easy rubbing. Granuaile couldn’t hear him, but she could follow along because I spoke my part of the conversation aloud.

“Oh, you mean Bast. Yes, I remember. Hard to forget something like that.”

“You already know why she was mad. She wanted me to return the book of her cult’s mysteries that I had stolen long ago.”

“Oh, I see. Heh! Yes, I suppose that would be a good story for the night. Wow, this is going way back to the third century. I was still haunting Europe at the time.”

“Wait, Atticus, hold on,” Granuaile said. “Is this going to take a while?”

“I don’t want to interrupt you in the middle of it. I should answer the call of nature first.”

“Good call, then. We’ll reconvene after a few words from nature.”

Some hiding places are better than others. The ones with friendly company are the best, and by friendly I mean people who don’t particularly care about your background or what your tattoos mean. They just want a name to call you by, a sense that you’ll pull your own weight and contribute to the group’s survival, and maybe the occasional joke or roll in the hay. I miss the days of easy anonymity, when I could just make up a name when I got to a village and stay there as long as I could keep from using any magic that would give my position away to the Fae. I met new friends, made myself useful, and disappeared for years at a time.

That didn’t mean I was impossible to find. The Morrigan could find me pretty much anytime she wanted. On this particular occasion, she found me hanging out with the Visigoths in what is now the southern tip of modern-day Moldova, since I was doing my best to avoid the Roman Empire. She lighted in a tree as I was collecting deadwood for the night’s fire, and her eyes glowed red to demonstrate that she wasn’t the average crow. I looked around. It was just me out there.

“Hi, Morrigan. Looks like the coast is clear. You need to tell me something?”

She flew down to the ground and shifted to her human form, the red coals in her eyes dying out. “Hello, Siodhachan. Yes, I am here to deliver a message. Ogma needs to see you rather urgently. You must go now to meet him in Byzantium.”

The Visigoths I was staying with were a part of that mess, in fact. Byzantium—indeed, most of the Roman Empire—was suffering what historians now call the “Crisis of the Third Century,” dealing with various invasions from its borders while internally their currency was taking a gigantic shit on the tiled mosaics of their bathhouse floors, and they had a string of military leaders taking turns at being emperor. The Morrigan came to see me in 269, right before Aurelian came to power and started to piece the empire back together.

“It’s going to get worse, especially down in Egypt. I have seen it.”

The tiniest of smirks lifted one corner of the Morrigan’s mouth. “I have seen you in danger there. So clearly you must go.”

“Somehow your words fail to motivate me.”

“I’m not supposed to motivate you to go down there. Ogma will do that. I just need you to go see him in Byzantium.”

“Favors. The finest currency of them all.”

That was less than subtle. I owed the Morrigan several favors, if not my life, and saying no to her was not an option. “Where in Byzantium?”

“There is a public house called Caesar’s Cup. Ogma will be waiting there.”

“He is aware. But you had best get started.”

“Until next time, Siodhachan.” She shifted back to her crow form and flew off into the dusk. I hauled my wood back to the village, got the evening’s communal fire started, then packed my few belongings and slipped into the darkness while everyone was eating their dinner.

Weeks later I strode into Caesar’s Cup, all my tattoos hidden to disguise my Druidry, pretending to be just another Roman citizen out for a drink. Ogma was indeed there, seated at the end of a bench table, his head shaven and his tattoos concealed as well, nursing a goblet of what passed for expensive wine at the time and a board of bread and cheese.

He bobbed his head at me and gestured that I should sit down across from him.

“Sure.” He called for one and poured me a deep red vintage before continuing.

“Well met. Did she tell you why I needed to see you?”

“Something involving Aegyptus, but no more than that.”

“Yes. The Palmyrans will revolt soon and Rome will answer in force. The great library in Alexandria will be in danger.”

I snorted. “It’s always in danger. Julius Caesar nearly burned it down a couple centuries ago.”

“We think this time it will be worse.”

Ogma’s eyes shifted down the table to a couple of men who had drinks but weren’t talking to each other. They were most likely listening to us.

“Myself, my sister, and the crow.” He meant Brighid and the Morrigan. “Much knowledge will be lost forever. And some of that knowledge should be preserved. I’m interested in a few specific scrolls.”

Shrugging, I said, “That’s great. Why tell me?”

“I want you to fetch them for me.”

I stared at him in silence for perhaps three seconds, then looked down at my drink. “I don’t understand. You have all of my skills and more. Surely it must be simple for you to do it yourself?”

Ogma chuckled and I looked up. He was grinning widely. “It’s far from simple. It’s rather deadly, in fact. These scrolls are well protected.”

“It must be fantastic information.”

“It is. And right now you are probably wondering why you would ever agree to do this.”

“I admit that had crossed my mind.” 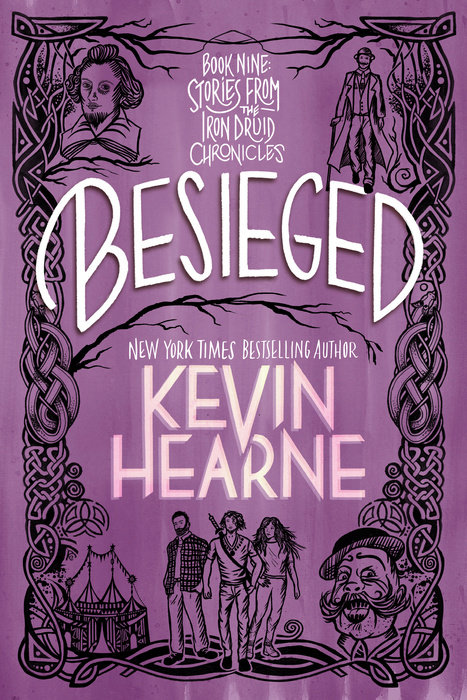