How to Navigate Clueless Colleagues, Lunch-Stealing Bosses, and the Rest of Your Life at Work

From the creator of the popular website Ask a Manager and New York’s work-advice columnist comes a witty, practical guide to 200 difficult professional conversations—featuring all-new advice!

There’s a reason Alison Green has been called “the Dear Abby of the work world.” Ten years as a workplace-advice columnist have taught her that people avoid awkward conversations in the office because they simply don’t know what to say. Thankfully, Green does—and in this incredibly helpful book, she tackles the tough discussions you may need to have during your career. You’ll learn what to say when

Praise for Ask a Manager

“A must-read for anyone who works . . . [Alison Green’s] advice boils down to the idea that you should be professional (even when others are not) and that communicating in a straightforward manner with candor and kindness will get you far, no matter where you work.”—Booklist (starred review)

“The author’s friendly, warm, no-nonsense writing is a pleasure to read, and her advice can be widely applied to relationships in all areas of readers’ lives. Ideal for anyone new to the job market or new to management, or anyone hoping to improve their work experience.”—Library Journal (starred review)

“I am a huge fan of Alison Green’s Ask a Manager column. This book is even better. It teaches us how to deal with many of the most vexing big and little problems in our workplaces—and to do so with grace, confidence, and a sense of humor.”—Robert Sutton, Stanford professor and author of The No Asshole Rule and The Asshole Survival Guide

“Ask a Manager is the ultimate playbook for navigating the traditional workforce in a diplomatic but firm way.”—Erin Lowry, author of Broke Millennial: Stop Scraping By and Get Your Financial Life Together

An excerpt from Ask a Manager

Conversations with Your Boss

Conversations with your boss can be stressful even when they’re relatively routine. The uneven power dynamic can mess with your head and make you approach conversations far more delicately than you need to, or even convince you not to have the conversation at all.

But for the most part, you’ll get the best results if you approach your boss as if she’s a normal human, not royalty or a terrible ogre. That’s sometimes easier said than done, though, so here are some general operating instructions to follow:

•    Don’t overthink it. Overthinking will cause you a lot more stress and anxiety than is probably warranted and it’s likely to make you less effective, too. You’ll wind up dancing around the issue, or using formal wording that sounds odd and unclear. Just be direct and straightforward.

•    Keep your ego at bay. The more you can approach the conversation from an emotionally detached place, the more effective you’re likely to be. This doesn’t mean that you can’t have emotions; it just means that you can’t let them drive the conversation. For example, if your boss gives you some critical feedback and you get defensive or upset, you’re less likely to truly process the guidance she’s giving you. Instead, calmly ask for more information and talk through your options. That should lead you away from defensive responses like “No one told me not to do it that way!” and toward more constructive responses like “Would it be better to do X?” or “I think X is happening because of Y. Let me try Z and see if that solves it.”

•    Think like a consultant. Employees’ relationships with their managers sometimes resemble a parent/child dynamic more than a peer-­to-­peer relationship—­and that’s not a good thing. To avoid that, try thinking of yourself as a consultant and your boss as your client. Consultants are able to sidestep that parent-­child dynamic because they’re independently offering their services, and while they want to make their clients happy, if they ultimately can’t see eye to eye on something important, they can part ways without a ton of drama. And really, that’s true for employees, too—­employees just tend to lose sight of it.

•    When you bring concerns to your boss, frame them from the perspective of “What makes the most sense for the organization and why?” rather than “I want X.” The former is the perspective that your boss will need to take, so it’s better for both of you if the conversation starts there. However . . .

•    If something really just comes down to “I want X,” it’s okay to be straightforward about that. If you’re in pretty good standing with your boss and you have some credibility built up (in part because you don’t approach her with “I want X”-­type requests on a daily basis), then sometimes it’s okay to say, “I know that this doesn’t sound like a big deal, but it’s driving me crazy. Could we try doing X instead?” or “X is really important to me. Can we talk about whether there’s any way to make that happen?” Good bosses want to make good employees happy, so knowing what would make you happier is actually great information for them to have.

•    Make it clear that you understand that your boss may have different information or a different perspective than you. In many cases, your boss really will have more information than you do, and you should approach sensitive conversations with that in mind. For example, if you’re concerned about why your boss moved a high-­profile project from you to your coworker, start by saying, “I realize that there might be reasons for this that I’m not privy to” as opposed to just launching into “I’m really upset about losing this project.” You’ll have more credibility, and you won’t put your boss on the defensive.

•    In some cases you’ll get better results by asking for a short-­term experiment rather than a permanent change. If your boss is resistant to what you’re asking for, suggesting a short-­term trial rather than a permanent change can be a good way to lower the stakes. For example, if you want to work from home on Thursdays and your boss isn’t convinced it makes sense, she might agree more easily if you don’t ask her to commit to it forever. Instead, say, “Could we try it for the next three Thursdays and see how it goes? If it causes problems, of course I wouldn’t continue. But it could be a good way to test it out.” This approach works for all kinds of requests, from asking for more autonomy in your work to suggesting a different format for staff meetings.

1. Your boss seems unhappy with your work

Sometimes it’s clear that your boss is unhappy with your work: You’re getting a lot of critical feedback and/or she tells you directly that she’s concerned. Other times, you might be less certain. Maybe you have a vague sense that she’s dissatisfied without having anything concrete to point to, or you might not know whether the amount of criticism you’re getting is par for the course or something to worry about.

In all these cases, the worst thing you can do is silently worry. You might think that raising the issue will make it worse, but really, if your boss has concerns about your performance, it’s much better to know and to try to address the situation. If you avoid the topic, you won’t ever know what you could be doing better. And you might be denying yourself peace of mind, too, if in fact your boss isn’t as worried as you think.

So, name what you’re worried about and ask for more insight. Here are some ways you can say it:

•    “I’m getting the sense that you’re concerned about how I’m handling X and Y. If so, I’d really like to talk it through with you and get your feedback.”

•    “I might be misreading, but you seemed disappointed with how project X went. Could we talk about how you think it went?”

•    “Can I ask about some of the feedback you’ve given me lately? I wasn’t sure if this is the amount and type of feedback you’d normally expect to give the person in my role, or if I’m having a tougher time than you’d generally expect.”

•    “Could we talk about how things are going overall? I’d ­really like to get your feedback on how I’m doing, in the big picture.”

2. The job isn’t what you agreed to

If you find yourself in a new job that’s significantly different from the one you signed up for, you should speak up. First, if you don’t speak up, your boss may not even realize this is happening; he may be so busy with other things that he hasn’t fully focused on what’s going on with you. Second, you want to find out whether you’re just pinch-­hitting for someone else short-­term (maybe until someone has time to train you on your primary responsibilities or until something else changes) or this is what the job will look like long-­term. And third, you need to be clear that you’re not okay with doing a different job than the one you signed up for. (Don’t assume that this is obvious.)

•    “Since I started a month ago, I’ve been spending most of my time on database maintenance. Could we talk about the plan for getting the accounting work transferred over to me? I was happy to help out with the database because I know we were in a pinch with Niles being out, but I’d r­eally like to focus on the accounting work I was hired for.”

If your manager says that there are no immediate plans to make that happen, you could say:

•    “Would you be open to talking about handling it differently? I hadn’t expected the job to be centered on database work when I took it, and it’s not something I’d normally seek to make part of my role.”

It’s possible that this conversation will make your manager realize that he needs a different plan—­in which case, great, problem solved. But it’s also possible that you’ll hear, “Yeah, I’m sorry it worked out this way, but this is what we need from the role now.” If that’s the case, you’ll need to decide if you want the job under these new terms. That’s definitely not fair—­but if it’s the reality of the situation, it’s better to figure that out sooner rather than later so that you can decide how you want to proceed.

3. You have concerns about a colleague’s work

Let’s say you have a coworker who isn’t very good at her job. Her work is full of mistakes, or she doesn’t return calls from her clients so they end up contacting you for help instead, or she’s frequently late in finishing up her piece of a joint project.

Of course, “significant” is the key here. Your coworker coming in two minutes late every day probably doesn’t meet that bar, but clients complaining that your coworker never responds to their calls probably does. The question to ask yourself is: How does this affect our work, and by how much? If it’s more than mildly annoying and has a real impact on the work, a good boss will want to know about it.

Alison Green runs the Ask a Manager blog, where she answers readers' questions daily on office and management issues. She also writes the workplace advice column Ask a Boss for New York magazine's The Cut, and is the co-author of Managing to Change the World: The Nonprofit Manager's Guide to Getting Results and the former chief of staff of a successful nonprofit organization, where she oversaw day-to-day staff management.

How to Navigate Clueless Colleagues, Lunch-Stealing Bosses, and the Rest of Your Life at Work 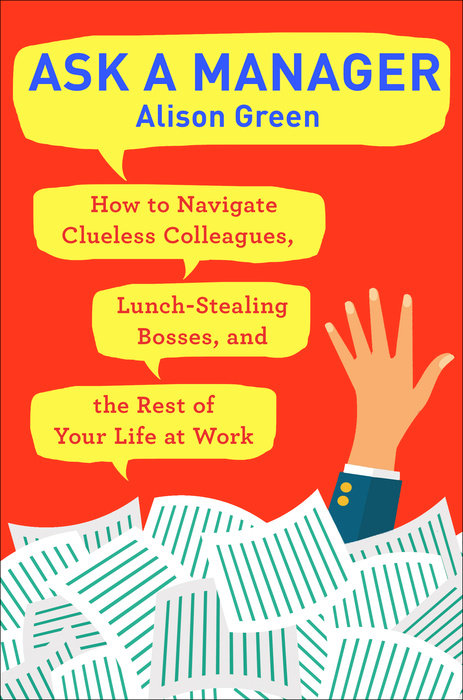