“The exuberant activity aboard the Splendido Marveloso is no match for the fireworks set off as the lies explode. Full of wicked humor and delicious destination details.”—People (Book of the Week)

NAMED ONE OF THE BEST BOOKS OF THE YEAR BY ESQUIRE

When seventy-year-old Charlotte Perkins submits a sexy essay to the Become a Jetsetter contest, she dreams of reuniting her estranged children: Lee, an almost-famous actress; Cord, a handsome Manhattan venture capitalist who can’t seem to find a partner; and Regan, a harried mother who took it all wrong when Charlotte bought her a Weight Watchers gift certificate for her birthday. Charlotte yearns for the years when her children were young, when she was a single mother who meant everything to them.

When she wins the contest, the family packs their baggage—both literal and figurative—and spends ten days traveling from sun-drenched Athens through glorious Rome to tapas-laden Barcelona on an over-the-top cruise ship, the Splendido Marveloso. As lovers new and old join the adventure, long-buried secrets are revealed and old wounds are reopened, forcing the Perkins family to confront the forces that drove them apart and the defining choices of their lives.

Can four lost adults find the peace they’ve been seeking by reconciling their childhood aches and coming back together? In the vein of The Nest and The Vacationers, The Jetsetters is a delicious and intelligent novel about the courage it takes to reveal our true selves, the pleasures and perils of family, and how we navigate the seas of adulthood.

An excerpt from The Jetsetters

Some evenings, Charlotte found herself standing in front of the family portrait. It hung in her Savannah, Georgia condominium, above the gas fireplace she rarely turned on. In the painting, her hair was a marvel of burnt umber and gold, falling in loose waves around her jawline. Her face was inscrutable with a “Mona Lisa smile,” as they called it, alluring in its standoffishness. No actual person smiled in this way. It was an expression meant to be gazed upon, not the sort of smile that came spontaneously, from joy. And yet, Charlotte concluded, she looked lovely, much better than she’d ever looked in real life. And certainly much better than she looked now that she was seventy-­one years old, her gray hair frosted to Marilyn Monroe platinum every third Tuesday by Hannah at Shear Envy.

Charlotte decided to wear a little black dress to her best friend’s funeral. Minnie had made gentle fun of Charlotte when she bought a neon-­pink cardigan at the Ralph Lauren outlet store, so Charlotte tossed it over her shoulders and added a white Coach purse. Charlotte could have called her daughter Regan for a ride, but then she would have to hear about the Weight Watchers gift certificate again, so Charlotte drove herself.

Charlotte and Minnie had discussed caskets more than once. Charlotte felt an open casket was both scary and kind of tacky. Minnie disagreed. She believed that saying goodbye to an actual face gave you more closure afterward. “I deal in reality,” Minnie had said, “and you live in denial. Or you try. But it’s going to catch up with you one day, Char.”

Perhaps today was the day.

Charlotte walked slowly to the altar, weak and dizzy. She could see Father Thomas watching her, and appreciated his concern. She peered inside the open casket, as Minnie would have wanted her to do. Minnie was wearing too much bronzer, but then she had always worn too much bronzer. Charlotte had tried to tell her, “Minnie, go easy with the bronzer!” But Minnie hadn’t listened, had gone on doing whatever she wanted. It was part of why Charlotte had loved her, ever since they’d first met at a St. James pancake breakfast, soon after Minnie had moved to Savannah. The pancakes had been awful—­mealy, drenched with cheap syrup—­and Minnie had turned to Charlotte and said, “Eyuck!”

Charlotte had looked down. She considered herself refined, not the type to insult pancakes at a church.

“I heard you,” murmured Charlotte.

“Your pants are fabulous,” said Minnie.

Charlotte touched her leopard-­print culottes (which matched her cheetah-­print shoes). They were fabulous.

They’d both been lonely. They went to art openings, Wine Down Wednesdays, and the Driftaway Café. They went to Marshwood Pool and Franklin Creek Pool, zipping along the golf-­cart paths, past magnolia trees and winter–lowering camellias. They played golf and watched people play tennis. Minnie had a Blue Demon golf cart with a forty-­eight-­volt motor and leather seats. Somehow—how?—twenty years passed, and now Charlotte was officially old and Minnie was dead.

“Too much bronzer, honey,” whispered Charlotte. Her throat grew hot. She touched Minnie’s cheek. “A nice blush. Why not a nice blush, Min?” she said softly. Once, after they had split a bottle of Barefoot Chardonnay, Minnie had allowed Charlotte to give her a makeover. In Charlotte’s bathroom, Minnie offered up her face. Charlotte applied foundation, mascara, lip liner, and lipstick. She curled Minnie’s sparse lashes, dusted her with loose powder. At last, Minnie opened her eyes. Charlotte ran a brush through her best friend’s hair as Minnie took in her new and improved visage.

“Well?” said Charlotte, crossing one arm over her chest, resting her chin in her opposite hand. “Aren’t you beautiful?”

“I look like a prostitute on Saturday night,” said Minnie, turning her head side to side to survey Charlotte’s expert contouring.

And then they both collapsed into laughter. How good it felt, thought Charlotte, to allow yourself to laugh, to let your guard down for an instant. The next day, when they met for their sunrise walk around the lagoon, Minnie’s face was as naked as a baby’s. A few years later, after her daughter sent her bronzer for her birthday, Minnie began showing up each morning in her usual visor and track pants, her cheeks carrot-­colored. For evening events, Minnie went orange from her hairline to her décolleté. The more Charlotte advised her, even buying Minnie subtle, tinted sunscreens and liquid blush at T.J.Maxx, the more defiantly Minnie bronzed.

Charlotte remembered Minnie’s warm cheekbones under her fingers, Minnie’s small sigh as she enjoyed the pleasure of being touched. Now, Minnie’s skin was ice.

“Ma’am?” said the woman behind Charlotte in line. She turned, but the woman was a stranger.

It was pouring rain outside St. James the Less Catholic Church. A young man offered his umbrella. Charlotte shook her head, hating to depend on anyone.

She had trouble getting her key in the lock of her VW Rabbit. The rain was relentless. When she was sitting inside her cozy condominium, she loved Savannah thunderstorms. But now, in a parking lot, she felt afraid. Everything seemed too loud. All Charlotte wanted was to drive home, pour a cold glass of Barefoot Chardonnay, and drink the cold glass of Barefoot Chardonnay. How could it be true that she couldn’t call Minnie to gossip about the funeral? Who had dressed Minnie in her least favorite floral blouse—­the one with the tulips—­and an unflattering, high-­waisted skirt?

Minnie had two children: a ne’er-­do-­well son and a divorced daughter. Both lived in New Jersey, the state Minnie had fled after her husband’s death. Charlotte had received an Evite to a brunch being held at Minnie’s townhouse “directly after the burial of our beloved Mama,” but had deleted it. Charlotte couldn’t bear to see Minnie lowered into the ground and was upset on Minnie’s behalf that her children couldn’t be bothered to send actual paper invitations. Though Minnie wouldn’t have cared. But Charlotte cared! It was simply gauche to send an Evite for an après-­funeral brunch. Minnie deserved better—­an eggshell-­white or pale pink invitation; handwritten calligraphy on heavy card stock.

Did Charlotte’s own children know to send paper invitations? Did they know she’d like a lunch held at Marshwood after her funeral? She made a mental note to tell Regan, who would remember. For a moment in the rain, Charlotte felt a wave of gratitude for her overweight, thoughtful daughter. She resolved to make more of an effort to be kind.

The battery on Charlotte’s key fob had run out months before. She knew she was jamming her key in the right place! But the door remained locked. “Mrs. Perkins!” cried the young man Charlotte had walked away from moments before. “I can help!”

What Charlotte wouldn’t give to slide into her car and zoom away.

“I can help,” he called, walk-­jogging across the lot, his enormous golf umbrella keeping him dry. “Mrs. Perkins,” he said, his voice overly solicitous. Charlotte knew he saw her as elderly, an elderly lady in the rain. She wanted him to know she’d been a stunning beauty once—­that inside, she was still that graceful young bohème. But strangers seeing you as someone you couldn’t bear to be was simply one of the indignities of age. You could accept it, rail against it, or just pretend it wasn’t happening. Charlotte moved between acceptance and willful ignorance, too elegant (and perhaps too worn out) to bother with nips, tucks, and the Beach Booty videos her friend Greer swore by.

“Let me help you, Mrs. Perkins,” said the man. He took her keys right out of her hand and she let him. “I offered you my umbrella,” he reminded her.

When she was inside her car, the young man lingered, saying, “I know you and Mrs. Robbins were thick as thieves. Always saw you cackling together after mass! I’m sorry for your loss. I’m really sorry.”

Charlotte felt antipathy rise inside her toward this man—­his cologne-­y smell, his close shave, his use of the word “cackling,” as if she and Minnie were nothing more than withered crones. His useless condolences. And worst of all, the fact that he was living and Minnie—­kind, sarcastic, thrumming with mischief—­was not.

“I said I sure am sorry,” repeated the man.

“Thank you,” said Charlotte. Finally, he shut the door and walk-­jogged back to the church steps. Charlotte closed her eyes. Rain hammered down.

Amanda Eyre Ward is the critically acclaimed author of six novels, including How to Be Lost, Close Your Eyes, and The Same Sky. She lives in Austin, Texas, with her family. 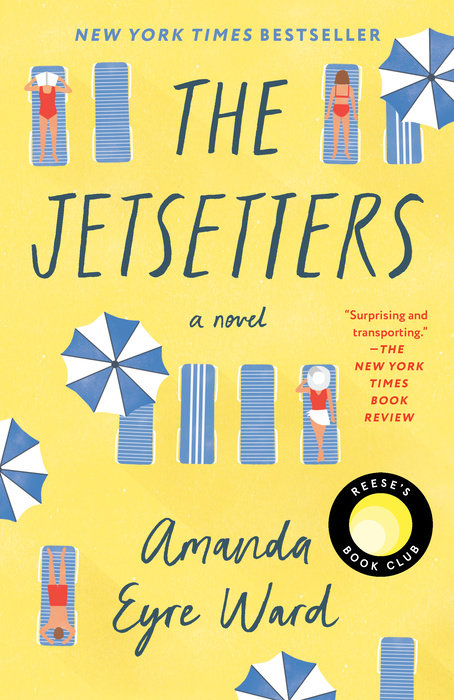