Enter a world of immortal danger and desire—and discover an incredible fate borne of blood.

Tendra: One minute, I’m a bartender in gritty Mission City; the next, I’m whisked away by a vampire named Athan who tells me that I’m the lifeblood of his clan. It sounds unbelievable, but he’s got evidence I can’t deny. Turns out, Athan belongs to an underground society of vampires who feed only on humans with their consent. Their enemies have no such qualms, and they want me dead. The only thing standing in their way is strong, sexy Athan. And the closer we get, the more tempted I am to let Athan feed. . . .

Athan: How could I have known when I snatched this snarky, beautiful human off the streets that she would change my destiny? As a loyal soldier, I must deliver Tendra to our future king—my brother. Empowered with the blood of ten generations of the Gregorie breed, she is fated to rule as our queen. But there’s something between us that’s so intoxicating, so carnal, I can’t help wanting Tendra for myself . . . even if it’s treason.

“Blood Guard caught me wonderfully off guard—a road trip paranormal romance that twisted my heart in all the right ways.”—Sarah Robinson, bestselling author of the Kavanagh Legends series

“Megan Erickson knows how to bring the heat! With a kick-butt heroine and a hero to die for, Blood Guard kept me reading all night long.”—New York Times bestselling author Tracy Wolff

“Lots of action and tons of sexually charged encounters. This book will fulfill your craving for the supernatural. A five-star read that is worthy of fang marks.”—Books and Boys Book Blog

“Megan Erickson plainly hooked me right in and made me wish to never get out. A kickass heroine and a vampire in touch with his feelings showing more humanity than possible . . . Just amazing all around!”—Alleskelle

An excerpt from Blood Guard

I set the tray of empties on the bar, and Kev went to work washing them while I leaned on the bar with a hand on my hip.

Carl turned to me. “Hey, Sugar.” He puckered his lips in a fake kiss, and I blew him one back. I knew his wife, daughter, and grandkids, so he was the only man who could call me Sugar. He and his brothers came in most nights, hats resting on the bar so the lights gleamed off their identical smooth, dark heads. “How’s Sasha?” I asked. His youngest grandchild recently broke her arm.

“Bah,” he said, slapping a hand on the bar. Well, he kinda missed the bar, but I got his intention. “She’s fine. Cast on, and she’s still jumping off the bed.”

“I’d take it away and make her sleep on a mattress on the floor,” I said.

Okay, so Michael would call me Sugar, too.

“We’ll see how you are one day when you have your own rug rats,” Kev said.

“Who says I want kids?” I picked up my tray and leaned over the bar to slide it on the shelf underneath.

I didn’t have any living relatives left that I knew of. My mom said my dad left when I was a baby, and later she’d heard he died in a car accident. So part of me yearned for a family of my own, but I hadn’t met a guy yet who I wanted to mix genes with. And I’d have to think long and hard about whether I wanted to bring a baby into this world. It hadn’t always treated me so well.

“You already said that!” Michael yelled, trying to grab his hat three times as he stood up. I picked it up for him and
placed it on his head. He muttered a thanks and followed his brothers toward the door. “Bye, Sugar!” Carl yelled.

“Get home safe!” I yelled back.

I glanced at the corner quickly, but the large man was gone. He must have slipped out while I was talking at the bar. I shivered, hoping he never came back. And then kinda hoping he did.

“You all right?” Kev’s brows were knit in concern.

“You looked like you saw a ghost or something.”

“Just felt like someone walked on my grave,” I said, watching as the last customer walked out the door. Ruby immediately sat down on a chair, took off her shoes, and stuck her feet in a pair of flip-flops. She was a petite black woman, and her flip-flops were child-size, which I teased her about a lot. She gasped and wiggled her toes.

“I don’t know how you walk in those things all night and then the whole way home.” She glared at me, then nudged her red heel and scrunched her nose. “I hate them. Devil shoes.” She crossed her fingers and hissed at it.

I shrugged and began to clean up the tables and lift the chairs. “I don’t know. They don’t bother me. And they are awesome weapons.” Mom was always big on self-defense. I was like MacGyver in a fight. Hell, I’d find a way to use a paper clip to rip open a jugular.

We cleaned up the bar in record time, and I plunked down on a stool at the bar to down a glass of water before the mile walk home. Ruby stood next to me and rested her head on my shoulder. “How are you? I feel like we haven’t talked in forever.”

I shrugged her off me with a laugh. “You’ve been busy with your woman.”

Ruby sat down next to me, nibbling her lip. “I know, but you’re my friend. I should be making time.”

“Stop, it’s a new relationship. You just feel bad because you know I don’t have any other friends.” Ruby sucked in a breath. Maybe I hadn’t meant to say that out loud, and not so bluntly, but it was true. I sighed. “It’s fine, really. I’ve been catching up on some k-dramas. I don’t mind being alone.”

Ruby rubbed her bare shoulder. “Maybe the three of us can hang out.”

“She said she might stop in sometime next week when I’m working. If you want to meet her.” Ruby was a peacemaker. She liked everyone happy and okay with each other.

I was a little too cynical for that, but I’d make it work for her. “Sure, that’d be nice.”

Ruby’s face brightened, despite the tired lines in her face. “Great. I’ll tell her. I want you two to like each other.”
Classic Ruby. Wanting a get-along gang. Which was not a bad thing, so I needed to get over myself. “I’m sure we’ll get along just fine.”

She squeezed my hand, then stood up. “I’m going to get going. Kev, you okay closing down?”

“Got it handled, ladies,” he said, pausing as he counted the money in the drawer. “Go on home.”

After saying good night to Kev and Ruby, I slipped on my leather jacket, turned up the collar, and began my walk home. The night air was cool, but a comfortable cool, a slight breeze lifting my hair and cooling my neck and clammy skin.

When Mom was alive, she’d wake up just to come to the bar to walk me home. I’d told her I could handle it myself, but she said she enjoyed it. We’d talk about everything and nothing in the darkness, and it ended up being some of my best memories.

I was depressing the hell out of myself right now.

I didn’t hear his footsteps, I didn’t see him, but I felt his presence, that same overwhelming fog that spun my head. I’d always prided myself on my instincts, but this was on a whole other sixth-sense level.

I slipped my hand into the pocket of my jacket and fingered my switchblade. Ruby asked me one time why I didn’t carry pepper spray like a regular person. But my mom had always insisted I learned how to physically defend myself. She hadn’t expected me to jump at the chance to take a class on weapon training, but I had. So a switchblade was my weapon of choice, and I was never without it on my walk home from work. Whether this man wanted to rape me, rob me, or kill me, I was going to be prepared. And then I was getting the hell out of Mission.
He was drawing closer now, the air thick with him, and I struggled to breathe, to keep my wits about me. I would not be beat today.

Keep it together, Ten. I counted in my head, knowing he was gaining on me, that I wouldn’t be able to outrun him, no way. Not a man that size. Not when I was wearing heels.

Five. I closed my fingers around the handle of my blade. Four. I adjusted the grip. Three. I pressed the small button to flick out the blade. Two. I took a deep breath.

I whirled around, crouching down while at the same time swiping the knife in an upward arc across my body.
I’d been right; he was there, inches behind me, and he reared back, narrowly avoiding the blade from slicing across his neck. In a fluid motion, I brought the blade back down and went for the gut, the vulnerable area between the sides of his unzipped jacket.

I didn’t even see his hand until his fingers closed around my wrist, squeezing my pressure point immediately, forcing me to drop my blade. With a frustrated yell, I reached behind me, slipped off my shoe, and tried to stab him in the face with my stiletto. But he knocked it out of my hand with ease, sending it flying into the street.
My heart beat a panicked rhythm and as he tugged me to his chest, I struggled to stay on my feet, to focus on getting away from him alive. I had one last defense, so I brought my knee up with a jerk to slam his groin.

I didn’t get anywhere near my target, because he was no longer in front of me, and in the next second I was airborne, His arms wrapped around me from behind, and my legs dangled uselessly as he crushed my back to his chest. I tried to fling my head back to head-butt him, but his monstrous height and my shortness rendered that move ineffective.

My last resort, the only thing I had left, which would get me nowhere in this part of town, was to scream.
So I did. I screamed my lungs out and flailed like a wild animal. He muttered, his voice a deep rumble along my spine, “I’m sorry to do this, Tendra,” before passing his wrist in front of my face.

I inhaled something sweet, sickly sweet. “What the . . .” The last word didn’t come. My lips and tongue wouldn’t move. My vision darkened at the edges, and the last thing I remembered was fingers brushing my hair off my forehead before everything went black.

Megan Erickson is a USA Today bestselling author of romance that sizzles. Her books have a touch of nerd, a dash of humor, and always have a happily ever after. A former journalist, she switched to fiction when she decided she liked writing her own endings better. She lives in Pennsylvania with her very own nerdy husband and two kids. Although rather fun-sized, she’s been told she has a full-sized personality. When Megan isn’t writing, she’s either lounging with her two cats, named after John Hughes, characters or . . . thinking about writing. 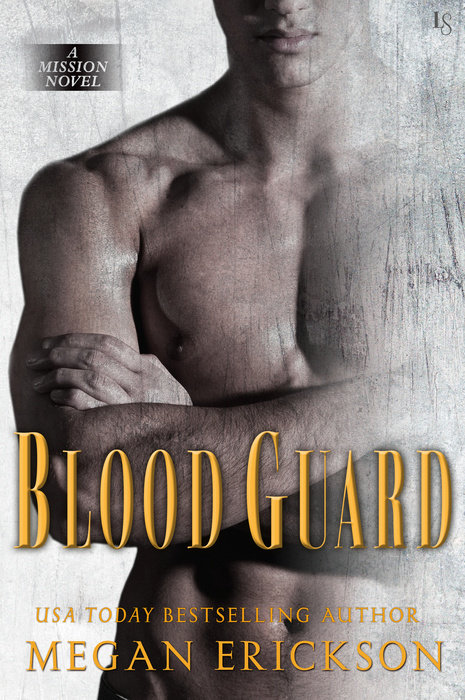