NEW YORK TIMES BESTSELLER • One juror changed the verdict. What if she was wrong? From the Academy Award–winning screenwriter of The Imitation Game and bestselling author of The Last Days of Night. . . .

An ID Book Club Selection • “Exhilarating . . . a fiendishly slippery game of cat-and-mouse suspense and a provocative, urgent inquiry into American justice (and injustice) in the twenty-first century.”—A. J. Finn, #1 New York Times bestselling author of The Woman in the Window

It’s the most sensational case of the decade. Fifteen-year-old Jessica Silver, heiress to a billion-dollar real estate fortune, vanishes on her way home from school, and her teacher, Bobby Nock, a twenty-five-year-old African American man, is the prime suspect. The subsequent trial taps straight into America’s most pressing preoccupations: race, class, sex, law enforcement, and the lurid sins of the rich and famous. It’s an open-and-shut case for the prosecution, and a quick conviction seems all but guaranteed—until Maya Seale, a young woman on the jury, convinced of Nock’s innocence, persuades the rest of the jurors to return the verdict of not guilty, a controversial decision that will change all their lives forever.

Flash forward ten years. A true-crime docuseries reassembles the jury, with particular focus on Maya, now a defense attorney herself. When one of the jurors is found dead in Maya’s hotel room, all evidence points to her as the killer. Now, she must prove her own innocence—by getting to the bottom of a case that is far from closed.

As the present-day murder investigation entwines with the story of what really happened during their deliberation, told by each of the jurors in turn, the secrets they have all been keeping threaten to come out—with drastic consequences for all involved.

An excerpt from The Holdout

Maya Seale removed two photographs from her briefcase. She held them face-in against her skirt. This thing was all going to come down to timing.

Belen Vasquez, Maya’s client, had suffered terrible abuse at the hands of her husband, Elian. There were extensive ER records to prove it. One morning a few months back, Belen had snapped. She’d stabbed her husband while he was sleeping and then cut off his head with a pair of garden shears. Then she’d driven around for an entire day in her green Hyundai Elantra with the severed head mounted on the dash. Either nobody noticed or nobody wanted to get involved. Eventually, a cop had pulled her over for running a light and she’d managed to stuff the head in the glove compartment.

The good news, from Maya’s perspective, was that the prosecution had only one piece of solid physical evidence to use against Belen. The bad news was that the evidence was a head.

“I’m ready, Your Honor.” Maya placed a reassuring hand on her client’s shoulder. Then she walked slowly to the witness box, where Officer Jason Shaw sat waiting, his Distinguished Service Medal displayed prominently on the lapel of his blue LAPD uniform.

“Officer Shaw,” she said, “what happened when you pulled over Mrs. Vasquez’s car?”

“Well, ma’am, like I was saying, my partner remained behind Mrs. Vasquez’s vehicle while I approached her window.”

He was going to be one of those cops who did the “ma’am” thing with her, wasn’t he? Maya hated the “ma’am” thing. Not because she was thirty-six, which she had to admit was probably “ma’am”-worthy, but because it was such a transparent attempt to make her seem stuck up.

She tucked her short, dark hair behind her ear. “And when you approached the window, did you observe Mrs. Vasquez sitting in the driver’s seat?”

“Did you ask her for her license and registration?”

“Did she give them to you?”

“Did you ask her for anything else?”

“I asked her why there was blood on her hands.” Officer Shaw paused. “Ma’am.”

“And what did Mrs. Vasquez tell you?”

“She said that she cut her hand in the kitchen.”

“And did she present any evidence to support her claim?”

“Yes, ma’am. She showed me the bandage across her right palm.”

“Did you ask her anything else?”

“I asked her to step out of the vehicle.”

“Because there was blood on her hands.”

“But hadn’t she given you a perfectly reasonable explanation for the blood?”

“I wanted to investigate further.”

“Why did you need to investigate further,” Maya asked, “if Mrs. Vasquez had given you a reasonable explanation?”

Shaw looked at her as if she were a hall monitor sending him to the principal’s office for some minor infraction.

Maya actually felt sorry for the poor guy right then. The prosecutor hadn’t prepped him well.

“I’m sorry, Officer, can you describe your ‘intuition’ in more detail?”

“Maybe I saw some of the head.” He was only digging himself in deeper.

“Maybe,” Maya repeated slowly, “you saw some of the head?”

“It was dark,” Shaw admitted. “But maybe I subconsciously noticed some of the hair—like, the hair on the head—sticking out of the glove compartment.”

She glanced at the prosecutor. He silently scratched at his white beard while Shaw single-handedly detonated his case.

Time for the photographs.

Maya held up one in each hand. The two photos showed different angles of a man’s head stuffed inside a glove compartment. Elian Vasquez had a buzz cut and a thin, unkempt mustache, crusted with blood. There was a streak of crimson across his cheek. The head had clearly bled out elsewhere, and then later been stuffed into the compartment, on top of the worn Hyundai manual and old registration cards.

“Officer, did you take these photographs on the night in question?” She handed them to him.

“Do they not show the head entirely inside the glove compartment?”

“The head is in the glove compartment, ma’am.”

“Was the glove compartment closed when you asked Mrs. Vasquez to exit her vehicle?”

“So how could you have maybe seen the head if it was entirely inside the glove compartment?”

“I don’t know, but I mean, we found it in there when we searched. You can’t tell me the head wasn’t in there, because it was.”

“I’m asking why you searched the car in the first place.”

“She had blood on her hands.”

“Didn’t you say, a moment ago, that you ‘maybe’ saw hair poking out of the glove compartment? I can have the court reporter read that back to you.”

“No, I mean—there was the blood. Maybe I saw some hair. I don’t know. Intuition, like I said.”

Maya stood very close to the witness box. “Which was it, Officer? Did you perform a search of Mrs. Vasquez’s vehicle because you saw some of a severed head—which you could not have—or did you perform the search because there was blood on her hands, for which there was a perfectly legal explanation?”

Shaw stewed angrily as he struggled to find an acceptable answer. He’d just realized how badly he’d screwed up.

Maya glanced over at the prosecutor, who was now rubbing his temples. He looked like he had a migraine.

The prosecutor made a heroic attempt to pin Shaw down to either one of his two stories, but the damage had been done. The judge ordered both sides to have briefs filed by the following Monday, at which point he’d make a final ruling on the admissibility of the severed head.

Maya sat down beside her client and whispered that the hearing had gone very well. Belen mumbled, “Okay,” but didn’t make eye contact. She wasn’t ready to celebrate yet. Maya appreciated the cautious pessimism.

The bailiff escorted Belen out of the courtroom, back to lockup. Then the secretary called for the next hearing.

The prosecutor sidled over. “If you get the head excluded, I’ll give you man two.”

Maya scoffed. “If you lose the head, you lose the body in the kitchen and the shears in the drawer. You won’t have a shred of physical to connect my client to the death of her husband.”

“Her husband, who she killed.”

“She’s not doing time. That’s nonnegotiable. Today, you can have reckless endangerment, time served. Or else you can try your luck next week after the ruling.” Maya nodded toward the judge. “How do you think that’s going to go?”

The prosecutor grumbled something into his tie about needing his boss’s sign-off, then slunk away. Maya slid the photographs back into her briefcase and shut the clasps with a satisfying snap.

The hallway outside was crowded. Dozens of conversations echoed off the domed ceiling. Courthouses were among the last places where all strata of society still brushed shoulders—rich, poor, old, young, people of every racial and ethnic background in Los Angeles walked across the marble floor. Hurrying to make it back to the office, she enjoyed being temporarily enveloped in the democratic crush.

The voice came from behind her. She recognized it instantly. But it couldn’t be him . . . ​could it?

Forcing herself to breathe, she turned. For the first time in ten years she found herself face-to-face with Rick Leonard.

He was still thin. Still tall. He still wore glasses, though the silver wire frames he’d worn as a grad student had become the thick black frames of a sophisticated professional. He still dressed formally, today in a light gray suit. He must be in his late thirties now, just a bit older than she was. The decade’s wear had, cruelly, made him handsomer.

“I’m sorry,” Rick said. His voice sounded smooth. Assured. “I didn’t mean to sneak up on you.”

Maya remembered Rick’s awkward hesitancy. Now he carried himself like a man who’d finally settled into his own skin.

She, on the other hand, was flushed with anxiety. “What are you doing here?”

Graham Moore is the New York Times bestselling author of The Sherlockian and the Academy Award–winning screenwriter for The Imitation Game, which also won a Writers Guild of America Award for best adapted screenplay. Moore was born in Chicago, received a B.A. in religious history from Columbia University in 2003, and now lives in Los Angeles. 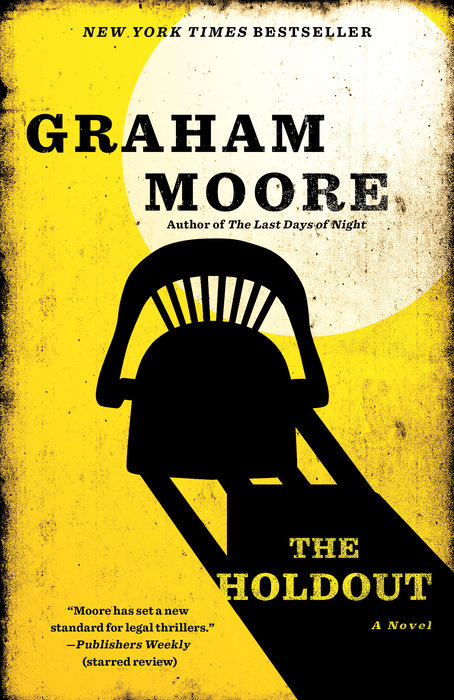