Set in Senegal, this modern-day Oliver Twist is a meditation on the power of love, and the strength that can emerge when we have no other choice but to survive.

“I loved this book because it is a story about generations of parents and children saving one another with a love so powerful that it transcends distance, time, and reason.”—Ann Napolitano, New York Times bestselling author of Dear Edward

Six-year-old Ibrahimah loves snatching pastries from his mother’s kitchen, harvesting string beans with his father, and searching for sea glass with his sisters. But when he is approached in his rural village one day by Marabout Ahmed, a seemingly kind stranger and highly regarded teacher, the tides of his life turn forever. Ibrahimah is sent to the capital city of Dakar to join his cousin Étienne in studying the Koran under Marabout Ahmed for a year, but instead of the days of learning that Ibrahimah’s parents imagine, the young boys, called Talibé, are forced to beg in the streets in order to line their teacher’s pockets.

To make it back home, Étienne and Ibrahimah must help each other survive both the dangers posed by their Marabout, and the darker sides of Dakar: threats of black-market organ traders, rival packs of Talibé, and mounting student protest on the streets.

Drawn from real incidents and transporting readers between rural and urban Senegal, No Heaven for Good Boys is a tale of hope, resilience, and the affirming power of love.

An excerpt from No Heaven for Good Boys

Ibrahimah slumps against the trunk of an ancient baobab tree and sets his red tin can between his feet. The tree’s gnarled, flowerless branches twist and bend over a wide, empty road with only a single white line running down its middle. It is late morning and the road is quiet, free of people, traffic, houses, or businesses. Just dry, parched earth stretching as far as the eye can see, with a scattering of baobab trees. Above, the sky is overcast and gray, but the air is warm. While his cousin Étienne and the other boys from the daara debate how to spend the afternoon, Ibrahimah’s eyelids hang heavy and his thoughts drift to his mother. The warmth of her touch, the sound of her voice, and the scent of her skin exist now only in memory.

Just as his daydream is about to take full possession of his consciousness, a ball of fire streaks toward him, landing on his knee. His slack muscles spring tight and his almond eyes stretch wide as teacups—­the apparition is a tiny red bird cocking its head, as if to get a good look at him. Not knowing whether to shoo the bird away or call for his cousin to witness the spectacle before him, he watches quietly and hopes that it is some kind of fairy, like the one his sisters told him would come for a tooth beneath his pillow.

The creature shakes its small head.

“You can understand me?”

The bird moves its head up and down.

Ibrahimah’s mouth forms a circle and his eyebrows arch.

The bird tilts its head back and sings a melody that the boy has heard before. He sees his village, Salloulou, and his mother flipping small pieces of lamb on the grill. His sisters chase one another, pulling the pigtails they can catch, and his father carries a box of vegetables from their farm. The image of home gives way to the small red bird’s fleeing tail feathers. Ibrahimah’s eyes linger on his knee, where the bird had landed, then he turns toward his cousin, who stands beneath another tree several feet away, out of earshot.

“Étienne! Did you see?” Ibrahimah yells, jumping to his feet.

Étienne turns away from the conversation he is having with Abdoulaye and Fatik, two other boys from their house. “See what?” Étienne shouts back.

“The bird! On my knee! He could understand when I talked.”

Ibrahimah races over to explain.

“So do you want to go or not?” Abdoulaye asks.

“Go where?” Ibrahimah asks, his mind still focused on the bird.

“The zoo!” Abdoulaye says, scratching at a patch of eczema on his bald scalp.

“You should have seen the bird on my leg! It talked to me!”

A silver Mercedes Benz passes by, its tires sticky against the newly paved road. Ibrahimah turns his head, but the car is going too fast for him to ever have a chance at begging from its occupants.

“Cousin, the day is passing, and once people get out of school and work, they may not let us in,” Étienne says, impatience lurking at the corners of his mouth.

Ibrahimah’s eyes drift back toward the empty sky. “You missed it,” he mumbles, following behind the three older boys.

Ibrahimah stands below the chipped blue arch that poses as the entrance to the Parc Zoologique in Hann Mariste, on the eastern rim of Dakar. The zoo is a little over an hour away by foot from Marabout Ahmed’s house in Ouakam, but the boys rarely abandon their normal route unless they hear of a good opportunity like free food, or a chance to make money. Excursions like this take too much time, and as the Americans like to say, time is money. But with Marabout gone, the hours from sunrise to sunset belong to the boys, and not even Étienne has been to the zoo before in the five years he has lived in Dakar. Ibrahimah’s cousin walks up to the window now and strains his neck to speak to the woman sitting on the stool inside the booth.

The young woman looks down at Étienne.

Étienne begins to count out six hundred francs from the coins in his palm, but the young woman slaps her hand on the counter to get his attention.

“No, just go in,” she says, pointing to the black gate that spontaneously clicks open. Étienne looks up at her in surprise. She replies with a wink of her eye.

“Give them a tour. The rush won’t arrive until later, when school is out,” she calls over to a man standing on the other side of the gate, wearing a dark-­green park uniform.

The man pulls the gate further open. Excited, Ibrahimah pushes past Abdoulaye and Fatik and bumps into the slim, dark-­skinned park ranger. Lush tall trees sit behind the man, and a dirt path. It doesn’t look like anything exists inside. Ibrahimah is curious to see what lies within.

“Are you ready?” the man asks.

“Have you seen lions before?”

Ibrahimah shakes his head no. The others mimic him.

The boys look at one another.

Silence again. The man chuckles and motions for the boys to follow him.

“What do I smell?” Ibrahimah asks, scrunching up his nose after taking a few steps.

“The chimpanzees,” the guide tells him, as they come upon a large metal cage to their right.

A large chimp gazes at the boys in boredom.

“Wow, it’s a monkey!” Ibrahimah says, moving closer to the cage to stare at the animal. He has seen small monkeys climbing in the trees back home, but he did not know they grew to be so tall and fat.

“Dance, dance,” the man instructs the animal, clapping his hands.

The chimp stands up and flaps its arms, then flips over backward and swings itself toward them, sticking his arm through the fence. The man hands Fatik, the boy standing closest to him, a piece of banana from the bucket near Tiki’s cage. Fatik pops the banana into his mouth and chews without a second thought. The chimp screams at them, jumps up, and bangs its hands against the fence.

“No, no!” the man says, stepping forward to hand the chimp a chunk of banana. “You’re supposed to give Tiki the banana after he dances. He dances for the food.”

Fatik’s eyes open wide with embarrassment as Ibrahimah, Étienne, and Abdoulaye fall into a fit of laughter.

The man digs out an additional four bruised bananas from the bucket and hands them to the boys.

“These are for you to eat.”

Ibrahimah sets his banana in his red tin can for later.

The chimpanzee stands up, flaps his arms, does a half flip, and then swings his body over to the gate and shoves his arm out, palm facing up. Ibrahimah accepts a chunk of banana from the guide and passes it to the animal. Tiki’s palm feels cold and rough, and he meets Tiki’s eyes for a second before the monkey swings away again. The guide ushers the group along, with Ibrahimah bringing up the rear of the pack.

He whispers the word “chimpanzee” to himself as the guide winds them down a narrow dirt path hugged by trees and plush grasses. The low growl of a beast rises up from behind a small group of park rangers and Ibrahimah’s heart beats faster in anticipation. Within another cage, this one smaller than the chimpanzee’s home, is a large four-­legged golden-­brown animal. Its skin is smooth and taut, its square jawline similar to Fatik’s face.

“This is a lion. He is Lion King. King of the jungle,” the guide says to the astonished faces of his group.

The lion paces back and forth about ten feet, the length of its mosaic-­tiled home, in a hurried manner.

“Why does he do that?” Étienne asks.

“He is restless,” the guide says. “Calmez-­vous, Lion King. Calmez-­vous.”

The lion growls, then releases a deep sigh of resignation and plops his large muscled body onto the floor.

“He is sad,” Ibrahimah whispers.

“This is not his home, just like Dakar is not our home,” Ibrahimah says, and walks away leaving the group and the beast behind.

Keisha Bush was born and raised in Boston, Massachusetts. She received her MFA in creative writing from The New School, where she was a Riggio Honors Teaching Fellow and recipient of an NSPE Dean’s Scholarship. After a career in corporate finance and international development that brought her to live in Dakar, Senegal, she decided to focus full-time on her writing. She lives in East Harlem. 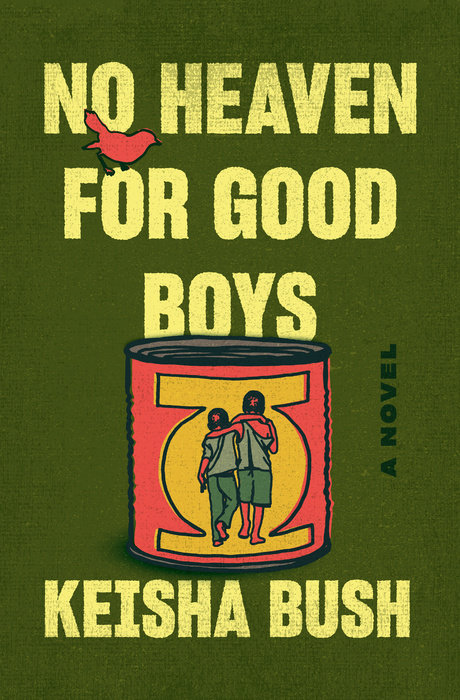