A decadent rock star. A deeply religious radio host. A disgraced scientist. And a teenage girl who may be the world’s last hope. From the mind of Chuck Wendig comes “a magnum opus . . . a story about survival that’s not just about you and me, but all of us, together” (Kirkus Reviews, starred review).

Shana wakes up one morning to discover her little sister in the grip of a strange malady. She appears to be sleepwalking. She cannot talk and cannot be woken up. And she is heading with inexorable determination to a destination that only she knows. But Shana and her sister are not alone. Soon they are joined by a flock of sleepwalkers from across America, on the same mysterious journey. And like Shana, there are other “shepherds” who follow the flock to protect their friends and family on the long dark road ahead.

For as the sleepwalking phenomenon awakens terror and violence in America, the real danger may not be the epidemic but the fear of it. With society collapsing all around them—and an ultraviolent militia threatening to exterminate them—the fate of the sleepwalkers depends on unraveling the mystery behind the epidemic. The terrifying secret will either tear the nation apart—or bring the survivors together to remake a shattered world.

In development for TV by Glen Mazzara, executive producer of The Walking Dead • Look for the sequel in 2022

“A masterpiece with prose as sharp and heartbreaking as Station Eleven.”—Peng Shepherd, author of The Book of M

“A magnum opus . . . It reminded me of Stephen King’s The Stand—but dare I say, this story is even better.”—James Rollins, #1 New York Times bestselling author of Crucible

“An inventive, fierce, uncompromising, stay-up-way-past-bedtime masterwork.”—Paul Tremblay, author of A Head Full of Ghosts and The Cabin at the End of the World

“An American epic for these times.”—Charles Soule, author of The Oracle Year

An excerpt from Wanderers

Shana stood there looking at her little sister’s empty bed, and her first thought was: Nessie ran away again.

She called to her a few times. Honestly, after Nessie had stayed up late last night to watch the comet through Dad’s shitty telescope, Shana  figured the younger girl would still be in bed, snoring up little earthquakes. She wasn’t sure where the hell else Nessie could be—Shana had been up for an hour already, making their lunches, finishing the laundry, putting the trash and recycling together so she could haul it up the long driveway for tomorrow’s pickup. So she knew Nessie wasn’t in the kitchen. Maybe she was in the upstairs bathroom.

It didn’t make much sense. First time Nessie ran away, that made sense.

They’d just lost their mother—lost her in a very literal way. The four of them went to the grocery store, and only three of them came back. They feared Mom had been taken and hurt, but eventually security cameras from the Giant Eagle showed that nobody kidnapped her; she strolled out the automatic doors like nothing was wrong and then walked out of their lives for good. Mom became a big question mark stuck in their cheeks like a fish-hook.

But it was clear that their mother didn’t want to be a part of their lives anymore. That, Shana knew even then, had been a long time coming, but the realization did not hit Nessie—and still had not reached her, even now. Nessie believed then that it was Dad’s fault. And maybe Shana’s, too. So two years ago almost to the day, after school was done for the year, Nessie packed a backpack full of canned goods and bottled water (plus a couple of candy bars), and ran away.

They found Nessie four hours later at the wooden bus shelter on Granger, hiding from a sudden rain squall. Shivering like a stray puppy. When Dad picked her up she kicked and thrashed, and it was like watching a wrestler try to pin a tornado. But then he gave up, said to her, “You want to run away, you run away, but if you’re thinking of going after your mother, I don’t think she wants to be found.”

It was like watching a glass of water tip in slow motion. Nessie collapsed in his arms and wept so hard she could only catch her breath in these keening, air-sucking hitches. Her shoulders shook and she pressed both hands under her armpits as if hugging herself. They got her home. She slept for two days and then, slowly but surely, came back to life.

That was two years ago.

Today, though, Shana could not gure out why Nessie would want to run away again. Girl was fifteen now and hadn’t hit the wall like Shana had at that age—as Dad put it, Shana “went full teenager.” Mopey and mad and hormones like a kicking horse. Shana was almost eighteen, now. She was better these days. Mostly.

Nessie was still all right, hadn’t turned into a werewolf. Still happy. Still optimistic. Eyes bright like new nickels. She had a little notebook, in which she wrote all the things she wanted to do (scuba dive with sharks, study bats, knit her own slippers like Mom-Mom used to do), all the places she wanted to go (Edinburgh, Tibet, San Diego), all the people she wanted to meet (the president, an astronaut, her future husband). She said to Shana one day, “I heard that if you complain it reprograms your brain like a computer virus and it just makes you more and more unhappy, so I’m going to stay positive because I bet the opposite is true, too.”

That notebook sat there on her empty bed. Next to the bed was an open box—Nessie had gotten some package in the mail, some science thing she must’ve ordered. (Shana borrowed a part of it, a little test tube, to hold weed.) Her daffodil-yellow sheets looked rumpled and slept-in. Her pink pillow still showed her head-dent.

Shana peeked at the notebook. Nessie had started a new list: JOBS I MIGHT LIKE?? Included: zookeeper, beekeeper, alpaca farmer, photographer. Photographer? Shana thought. That’s my bag. A weird are of anger lanced through her. Nessie was good at everything. If she decided to do the thing that Shana wanted to do, she’d do it better and that would suck and they’d hate each other forever. (Well, no. Shana would hate Nessie. Nessie would love her unconditionally because that was Nessie.)

Shana called out for her again. “Ness? Nessie?” Her voice echoed and nothing but the echo answered. Shit.

Dad was probably already in the so-called milking parlor (he said if they’re going to be part of the artisanal cheese movement here in Pennsylvania they needed to start talking like it, damnit), and he would be expecting Ness and Shana to staff the little shop up by the road. Then eventually he’d come get one of them to head into the cheese barn to check the curds on that Gouda or get the blues draining—then mix the silage and feed the cows and ah, hell, the vet was coming today to look at poor Belinda’s red, crusty udders and—

Maybe that’s why Nessie ran away. School was out already and summer vacation wasn’t much of one: Everything was work, work, work. (Shana wondered if Nessie had the right idea. She could run away, too. Even for the day. Call up her buddy Zig in his Honda, smoke some weed, read comic books, talk shit about the seniors who just graduated . . .)

(If she didn’t get out of here soon, she’d stay here forever. This place felt like quicksand.)

Of course, Nessie was too good a girl to have run away again, so maybe she got the jump on Shana and was already out in the shop. Little worker bee, that one. What was the song on Dad’s old REM album? “Shiny Happy People”? That was Nessie.

Shana’d already eaten, so she went in search of the little clip-on macro lens she used over her phone’s camera to let her take photos of things real close-up, magnified. Little worlds revealed, the micro made macro. She didn’t have a proper camera, but she was saving up to get a DSLR one day. In the meantime, that meant using the phone. Maybe she’d nd something in the stable or in the cheesemaking room that would look cool up close: flaking rust, the red needle in the thermometer, the bubbles or crystals in the cheese itself.

It hit her where she’d left the lens last time—she was taking pictures of a house spider hanging in her window, and she left the lens on the sill. So she went there to grab it—

Something outside caught her eye. Movement up the driveway. One of the cows loose was her first thought.

Shana headed to the window.

Someone was out there, walking.

T-shirt. Barefoot, too, by the look of it. Oh, what the hell, Nessie?

Shana ran to the kitchen, forgetting her lens. She hurriedly popped on her sneakers and ran out the door to the back porch, nearly tripping on the one sneaker that wasn’t all the way on yet, but she quick smashed her heel down into the shoe and kept on running.

She thought to yell to her little sister, but decided against it. No need to draw Dad’s attention. He’d see they weren’t out in the shop yet and give them a ration of hot shit about it, and Shana didn’t want to hear it. This was not a morning for nonsense, and already the nonsense was mounting.

Instead she ran up along the driveway, the red gravel crunching underneath her sneaks. The Holsteins on the left bleated and mooed. A young calf—she thought it was Moo Radley—stood there on knock-knees watching her hurry to catch up to her tweedledum sister. “Nessie,” she hissed. “Nessie, hey!”

But Nessie didn’t turn around. She just kept on walking. What a little asshole.

Shana jogged up ahead of her and planted her feet like roots. “God, Nessie, what the hell are you—”

It was then she saw the girl’s eyes. They were open. Her sister’s gaze stood fixed at nothing, like she was looking through Shana or staring around her.

Dead eyes, dead like the at tops of fat nails. Gone was the luster of wonder, that spark.

Barefoot, Nessie continued on. Shana didn’t know what to do—move out of her way? Stand planted like a telephone pole? Her indecision forced her to do a little of both—she shifted left just a little, but still in her sister’s inevitable path.

The girl’s shoulder clipped her hard. Shana staggered left, taking the hit. The laugh that came up out of her was one of surprise. It was a pissed-off laugh, a bark of incredulity.

“That hurt, dummy,” she said, and then grabbed for the girl’s shoulder and shook her.

Nothing. Nessie just pulled away and kept going. 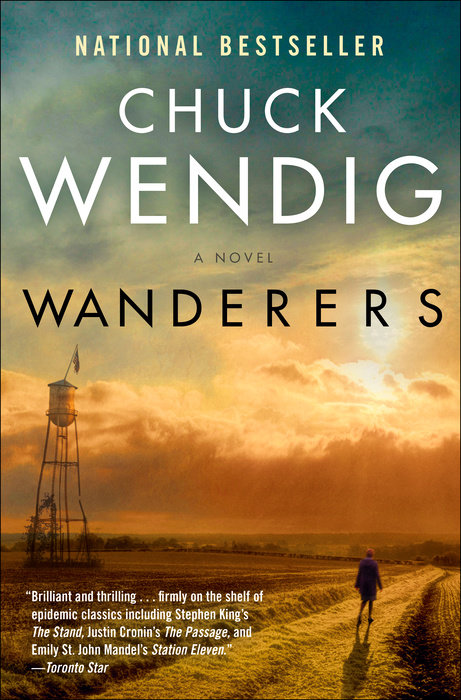