An idyllic California town. A deadly secret. A race against killers hidden in plain sight. . . .

“Extraordinary! I can think of no other thriller that portrays its vital themes—all relevant to our times—in such a riveting and up close and personal way.”—Jeffery Deaver, author of The Bone Collector

Rancho Santa Elena in 1987 seems like the ideal Southern California paradise—that is, until a series of strange crimes threatens to unravel the town’s social fabric: workers attacked with mysterious weapons; a wealthy real estate developer found dead in the pool of his beach house. The only clues are poison and red threads found at both crime scenes. As Detective Benjamin Wade and forensic expert Natasha Betencourt struggle to connect the incidents, they begin to wonder: Why Santa Elena? And why now?

Soon Ben zeroes in on a vicious gang of youths involved in the town’s burgeoning white power movement. As he and Natasha uncover the truth about Santa Elena’s unsavory underbelly, Ben discovers that the group is linked to a much wider terror network, one that’s using a new technology called the internet to spread its ideology, plan attacks, and lure young men into doing its bidding. Ben closes in on identifying the gang’s latest target, hoping that the young recruit will lead him to the mastermind of the growing network. But as he digs deeper in an ever-widening investigation, Ben is forced to confront uncomfortable truths about himself and his beloved community, where corruption is ignored and prejudice is wielded against fellow citizens without fear of reprisal.

Chilling and timely, The Recruit follows one man’s descent into the darkness lurking just beneath the respectable veneer of modern life.

An excerpt from The Recruit

Detective Benjamin Wade was parked in the emergency lane of the Lucky’s parking lot at Alta Plaza, admiring the sight of the snow-covered Santa Ana Mountains shouldering out of storm clouds. It had snowed overnight down here, too, on the flats of Rancho Santa Elena, and shoppers, pushing their carts toward the entrance to the store, gawked at the rare spectacle of it. He was stealing a fifteen-minute lunch in his idling unmarked cruiser to put away an “animal style” In-N-Out burger, keeping an eye on the Salvation Army Santa who was pocketing change when no one was looking. He was just about to walk over there to introduce himself to St. Nick when the Code 3 hot response squawked in over the scanner. Child in distress, Marsha Lynn, the daytime dispatcher called over the radio, 19734 Jupiter Street, California Homes. Mother on-site.

Ten minutes earlier, Ben had called to check in with his ex-wife, Rachel, on the cruiser’s Motorola cellphone during her planning period at the high school where she taught English literature. Yes, he was getting Emma from school today. No, the pediatrician’s appointment wasn’t until next Tuesday. Yes, she’d pick up Emma out at his place at 4:30. He’d put in a call to Natasha—his girlfriend, he guessed, though that made it sound trivial—up at the county coroner, but according to Mendenhall, the chief medical examiner, Natasha was still out on the scene. Her pager had buzzed at 5:43 this morning, and he’d watched from his bed as she dressed in the dark, off to face the dead. He knew what they’d be talking about tonight.

Ben listened to the scanner now, waiting to see who would pick up the call. The Portrero Station EMTs were already working a three-car fatal on the Santa Ana Freeway, and the Trabuco Station was five miles away. The address was just a few blocks from where Ben sat in the strip mall, so he crumpled up the rest of the burger, jerked the cruiser into gear, and jetted out of the parking lot. The thieving Santa Claus would have to wait.

He was there in two minutes, parking the nose of the cruiser on the sidewalk in front of a single-story ranch home. The mother stood outside on the snow-splattered grass, a child, maybe three years old, twisted in her arms. “Oh, God,” she was saying—he could hear her even before he threw open the door. “Oh, God. What’s wrong? What’s wrong, baby?” The terror streaked across her face jacked Ben up, his adrenaline suddenly pumping.

“Please,” she said as Ben ran to her. “Please, he’s not breathing.”

Foam bubbled from the boy’s lips, and blood, streaming from his nose, streaked his cheek.

Ben pressed his fingers to the boy’s neck, trying to find a pulse in the carotid artery. Nothing. Shit.

“I don’t know. He was watching TV. I was in the kitchen.”

He pushed up the boy’s Sesame Street shirt, Cookie Monster munching chocolate chip, and laid his hand on the boy’s belly.

“Please, let me have him,” Ben said, pulling the boy from his mother’s grasp, which sent her into a new round of wails.

He laid the boy down in the snow-wet grass, cradling the back of the boy’s neck with his left palm and pressing his right hand on the child’s thin sternum. With the heel of his hand, Ben pumped the sternum, foam frothing in the boy’s open mouth, and pressed again. Come on, kid. Come on. He pumped again and again, the bone flexing beneath his hand, the boy’s body limp in the grass.

A black-and-white swerved on scene, the bar lights throwing red and blue against the boy’s white cheek. Using three fingers, Ben scooped the foam from the boy’s mouth and flicked it onto the grass. He pinched the boy’s nose shut and placed his mouth over the kid’s lips, breathing his air into the child’s body. The foam tasted syrupy-sweet metallic-bitter, Ben’s tongue burning numb with it. Come on, come on. He broke the suction around the boy’s mouth and took a surfer’s breath, pulled in all the cold air like he was about to dive beneath a fifteen-foot crusher, and thrust his air into the boy. The child’s chest heaved and he spit foamy breath across Ben’s cheek.

Then the kid was coughing, his chest convulsing with oxygen.

“Where’re the EMTs?” Ben yelled at the uniforms standing dumbly on the edge of the scene.

One of the cops ran to his cruiser, called in an ETA. “Junipero and Serrano.”

“Shit.” Ben lifted the coughing kid into his arms. “Get in the car,” he said to the mother. Hoag Hospital was three-quarters of a mile away; he could be there in a minute. It’d be ten, maybe fifteen before the EMTs arrived, assessed the situation, and got the boy into emergency. The mother jumped into the passenger seat and Ben laid the boy on her lap—his blue eyes wide with fear now, the blood still running from his nose. Ben peeled the cruiser out of the driveway, and then gunned it out of the housing tract down El Rancho Road.

Hitting sixty, he called in to Hoag emergency. “Driving in a code pink,” he said to the nurse on the line. “ETA one minute.”

At the hospital, two nurses were waiting, a stretcher between them. Ben laid it out for one of the nurses as they ran the boy inside—unresponsive upon arrival, foaming mouth, bloody nose, CPR.

“How long in asystolic arrest?” one of the nurses said, two fingers on the boy’s wrist as they ran through the sliding front doors of the hospital. “With no heartbeat? How long?”

And then they were through the hallway and banging open the doors to the resuscitation room, the boy, wailing now, lifted out of the stretcher and laid out on the bed, an oxygen mask slipped over his mouth. A half dozen nurses and doctors crowded Ben out, a rush of scrubs, and the boy’s mother crying Is he going to be okay? Will he be all right?

Ben stumbled out of the trauma room then, back into the waiting area. His tongue felt like a scrap of alloy, his mouth, too, like tinfoil lined the skin. He found a bathroom and locked himself inside, twisted on the faucet, and bent to slurp the water from the spigot, desperate to get the bitter taste out of his mouth.


It had been snowing when Natasha Betencourt arrived on the Huntington Beach scene. Not thick flakes like the ones falling in the San Gabriel Mountains, but hard pebbles that needled her cheeks. She was on her knees at the edge of a swimming pool, a warm fog of condensation rising from the heated water. The body was floating on its back, the man’s eyes stunned wide open, staring blind at the white sky swirling above him.

“They usually bob facedown,” the detective said, standing next to her.

“The skimmer’s got him,” Natasha said. The dead man’s right hand was caught in the weir, holding the body in place; jammed up with his fingers, the bucket was making a sucking noise.

“Right,” the detective said. “But if he drowned in the pool, he’d still be doing a dead man’s float.” He held his right hand out to his side, mimicking the dead body, and spun his shoulders a bit, as though trying to imagine a scenario in which the body would somersault onto its back.

“I haven’t ruled anything out.”

She’d worked with Detective Joseph Vanek briefly on a case a few years back, ’81 or ’82, when she was learning the ropes as a brand-new medical examiner. During autopsy, she had found blood in the mouth of the female victim that wasn’t her own and suggested to the detective that the woman had bitten her killer, perhaps in some kind of struggle. That led to a FedEx delivery man, whose route included the woman’s suburban home, with bites on his right hand and wrist. Blood samples matched, and the killer confessed. A few days later, Vanek had sent her a thank-you note—a simple card with his name embossed on the front and his elegant handwriting on the back. Beyond that, she didn’t know much about Vanek, but rumor back then had it that he’d been a homicide detective in South Central LA, working the crack cocaine wars before leaving the LAPD for the Huntington Beach job.

When she had arrived just after dawn, she had found the detective right here, in a fog of steam next to the pool, leaning on a black umbrella and talking scenarios out loud to himself. Now he tapped the aluminum tip of the umbrella against the cement pool edge, as though putting a quiet exclamation mark on an important thought.

Alan Drew is the author of the critically acclaimed novels Gardens of Water and Shadow Man. He is a graduate of the Iowa Writers’ Workshop. An associate professor of English at Villanova University, where he directs the creative writing program, he lives near Philadelphia with his wife and two children. 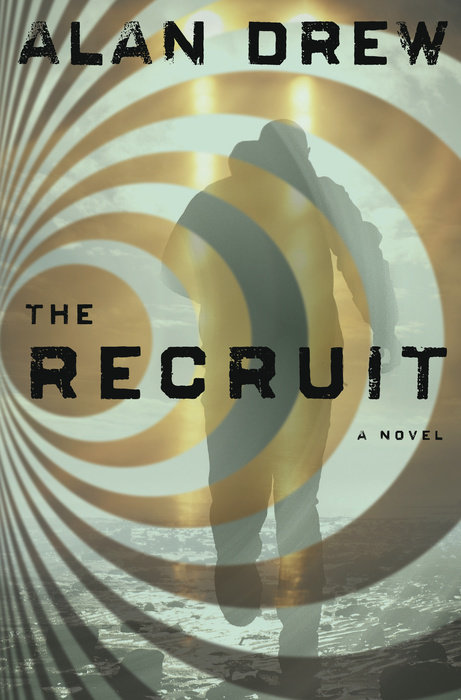