One of the most cunning and merciless officers of the First Order, Captain Phasma commands the favor of her superiors, the respect of her peers, and the terror of her enemies. But for all her renown, Phasma remains as virtually unknown as the impassive expression on her gleaming chrome helmet. Now, an adversary is bent on unearthing her mysterious origins—and exposing a secret she guards as zealously and ruthlessly as she serves her masters.

Deep inside the Battlecruiser Absolution, a captured Resistance spy endures brutal interrogation at the hands of a crimson-armored stormtrooper—Cardinal. But the information he desires has nothing to do with the Resistance or its covert operations against the First Order.

What the mysterious stormtrooper wants is Phasma’s past—and with it whatever long-buried scandal, treachery, or private demons he can wield against the hated rival who threatens his own power and privilege in the ranks of the First Order. His prisoner has what Cardinal so desperately seeks, but she won’t surrender it easily. As she wages a painstaking war of wills with her captor, bargaining for her life in exchange for every precious revelation, the spellbinding chronicle of the inscrutable Phasma unfolds. But this knowledge may prove more than just dangerous once Cardinal possesses it—and once his adversary unleashes the full measure of her fury.

“Fury Road meets The Force Awakens . . . a much-needed origin story for one of the new Star Wars saga’s most mysterious characters.”—The Verge

An excerpt from Phasma (Star Wars)

Vi was trained to remember every detail when it counts, but even she can’t keep up with the labyrinthine twists and turns of the enormous Star Destroyer’s guts. Long hallways end and intersect, and turbolifts up and down make it impossible for her to recall their route. It’s one thing to see pictures of ships like this one, but it’s another thing to really understand the enormity of their enemy’s resources. As he guides her into another lift, the man in red stands in front of the panel so she can’t see which level they’re headed to.

“Your place or mine?” Vi asks, hoping to goad him into moving aside.

But the man in red is silent, the gun always rammed into some soft place on her body and the spherical droid floating by his side. Her leather jacket has built-in armor plating, but it wouldn’t do much to stop a fatal shot at this distance. Thing is, she knows he’s not going to shoot her. But she has to play along. When she slowly begins to take her hands down, he clicks his tongue at her.

“Tsk. Hands on head. You know how this works, scum.”

The blaster shoves into her kidney, and her hands go right back up. “Look, I’m not scum. I don’t know who you think I am, but I’m just a trader. Maybe I smuggle a little, but who doesn’t? And wouldn’t that be the New Republic’s jurisdiction, anyway? Did I travel back in time? Shouldn’t I be in a cell, waiting to speak to some cadaverous bureaucrat in a jaunty hat?”

The lift door slides open, and he shoves her out into a hall that’s downright dungeonous. They didn’t see anyone farther up, and Vi is willing to bet that’s due to a combination of this trooper’s knowledge of the ship’s rigorous schedule and his droid’s meddling, as it sometimes pushed ahead to lead. But down here—well, it’s clear nobody goes down here. Except people doing things they shouldn’t be doing.

The lighting is dim and flickering, and there’s something dripping, maybe runoff from the vent system. They’re deep in the bowels of the Star Destroyer, then, in an area that’s generally off-limits or beneath notice. And that’s not good for Vi. Even the First Order has rules, and the red trooper is breaking them. If this guy kills her, he won’t even have to do datawork. She’ll just be another load of garbage sliding down toward the incinerator.

Great. The Resistance doesn’t know much about the enemy they’re facing, and the New Republic doesn’t consider them a threat, which means Vi hasn’t been briefed on the protocol these people generally follow. She doesn’t know what to expect. She’s been trained to resist interrogation, but she also doesn’t know what new toys this guy in red might have. A chill trickles down her spine. She might be in over her head.

“They put you in the penthouse, huh, Emergency Brake?” she says, because she always babbles when truly worried. “Top-notch accommodations. Can we get room service?”

The blaster doesn’t leave her spine. Her captor gives her directions— turn here, turn there—but doesn’t respond to her taunting. Finally, he presses a long code into a control panel on the wall, and a door slides open far less smoothly than Vi would expect in what’s obviously a new ship. The room inside is colder than it should be and smells of moisture, metal, and, no point in denying it, blood. The spherical droid hurries inside first and turns off the cams, one by one. Vi pauses on the threshold, but the trooper finally touches her, shoving her hard with a gloved hand so that she stumbles to her knees, her fingers curling into a rusty grate set in the floor.

“You really know how to treat a girl right.”

He reaches into her jacket’s collar and hauls her to her feet, spinning her around. She staggers into the wall, putting her back against the cold metal. The room isn’t large, maybe three meters by four, and it clearly has only one use: interrogation. Well, two uses, if you count torture. Three, if you include the inevitable death promised by the fact that she’s not going to give up any intel on the Resistance. The space is dominated by an interrogation chair, and the only other furnishings are a simple table and two rickety metal chairs, a place for the bad guys to sit down with a cup of caf and go over their notes while their victim bleeds out, probably.

“I hope the linens are clean.”

He shakes his head like he’s disappointed, grabs her jacket lapels, and drags her to the interrogation chair. They call it a chair, but it’s actually like a gurney standing on end with metal pincers to restrain her head, chest, and wrists as she stands on the metal lip. As part of her training, Vi was shown dozens of images of such machines ranging back from the days of the Empire’s Inquisitors to more sophisticated units currently being manufactured for Hutts and other thugs with too much money and a need to get information while keeping their slimy hands clean. This unit, she’s sad to notice, has life-support capabilities and a mind probe, which means her captor can bypass discussion and go straight to her brain. Vi has been trained to withstand fists and weapons, but no one has yet found a way to evade direct attacks on the nervous system. She contemplates the poison tooth implanted in the back of her jaw for the first time, running her tongue over it as her captor snaps the metal manacles closed around her arms and torso.

She won’t bite down yet. There’s still a way out of here. There has to be. With everything she knows now, surviving will mean major strides for the Resistance. They’ll have a better idea of what they’re truly fighting, in numbers, technology, and enemy mindset. But that means she’s got to find a way to live through this interrogation with her mind and body intact. And that means she’s got to stop focusing on her own predicament and start paying attention to her enemy and what makes him tick.

Luckily, she knows a lot more about him than he knows about her.

After strapping her in, he checks the panel monitoring her vital signs, flicking it with a finger.

“Your heart rate is up,” he notes.

“Yeah, well, I’m strapped into a torture chair, standing on somebody else’s dried blood. Seems like a natural response.”

“You’ve got something to hide.”

His red helmet tips, just a fraction, conceding the point. As she watches him, he moves around the edges of the room, double-checking the cam feeds his droid already shut off, as well as what she’d guess is the comm system. The droid hovers ominously beside his shoulder, and he makes the rounds slowly, as if giving a warning.

This is not official.

This is off the record.

No one else is watching.

There will be no interruptions, no reprieves.

This is not how the First Order does things.

“So this is personal,” Vi notes.

Vi wiggles, testing the strength of her bonds. “Letting me go would be really, really easy. Besides, you can search me all you want, but I don’t have anything useful. Let your boys tear my ship apart, deconstruct my droid, unravel my sweater, poke around in my brain all day. Whoever you think I am, you’re wrong. I’m just a harmless passerby.”

He stands before her now, legs spread and arms crossed. His blaster is clipped on his hip, red and gleaming. His red-gloved fingers tap against it, another reminder. It’s just the two of them and his droid. Anything could happen.

“You are Vi Moradi, code name Starling, known Resistance spy. And you have the very intel I need.”

“And you’re the Big Red Button. What happens if I poke you in the chest? Does a light turn on somewhere? Does something explode?”

She would shrug if she weren’t manacled and strapped down. “You’re the one running the torture, so you’re the one who gets to decide what’s true and what’s not.”

“You were on Parnassos.”

Vi is too well trained to grin.

“Was I? And what’s so important about Parnassos?”

Her captor considers her. “Nothing. That’s the point. Now tell me what you know about Captain Phasma.” 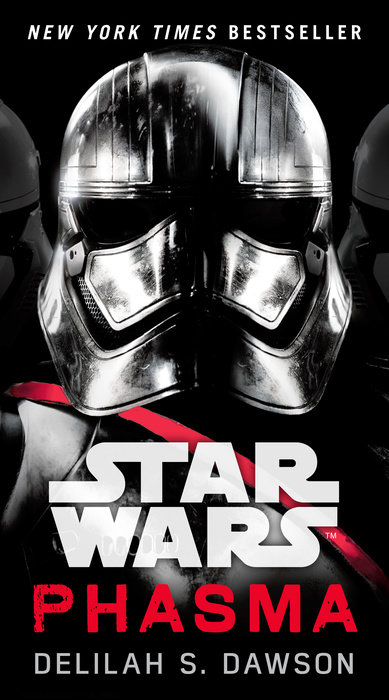