A tragedy on a hot summer night at a lake house forever alters the lives of two best friends—and the man they both love. But the truth isn’t as simple as it appears in this intricate novel of love, friendship, betrayal, and forgiveness.

Leah has been waiting for this moment a long time: Her boyfriend, Ollie, is taking her to his family’s home on Seneca Lake for a week of lazy summer bliss, boating, and barbeque. The couple have been together four years, and Leah is convinced that Ollie is finally going to pop the question. Leah can’t wait to share the joyous news with her best friend, June, who is joining them on their getaway, and whose presence will make everything feel more real.

Seven years later, the moment June has been dreading has finally arrived: Her fiancé, Ollie, is taking her to his family’s lake house. But this is not an ordinary visit to an ordinary place; it is a house haunted by June’s long-buried memories of her lost friend Leah—and the connection that appears to remain between Leah and the man for whom June’s love is as deep as her grief.

Alternating between the two women’s vibrant voices, One Night at the Lake is an emotional novel that explores a complex tangle of friendship, loyalty, and betrayal, all driving toward one question: Can love overcome what happened on that hot summer night?

Praise for One Night at the Lake

“Captivating and compelling . . . This is the perfect book to slip into your weekend bag for your own trip to the lake this summer.”—Jill Santopolo, New York Times bestselling author of The Light We Lost

“With gripping prose and a setting that is as sentient as the characters who inhabit it, Bethany Chase draws a tale that is immediate and real, the kind of story you’ll feel to your gut.”—Michelle Gable, New York Times bestselling author of A Paris Apartment

“Chase has crafted the perfect blend of fully realized characters and a burning question I couldn’t wait to have the answer to. You won’t be able to turn the pages fast enough.”—Tracey Garvis Graves, New York Times bestselling author of On the Island and The Girl He Used to Know

An excerpt from One Night at the Lake

I probably should have pretended to be at least a little bit sad about my best friend’s breakup, but it was a tough ask considering I knew all along the guy was a mallet-faced shitweasel. And besides, it’s not like I’ve ever been shy about speaking my mind. June knew what she was in for when she called me.

“Babe,” I say, “Rick Bergstrom has the personal charisma of a boiled carrot. Are you seriously telling me that you’re upset to be done with him?”

“Noooo, I guess not. But if I got dumped by a boiled carrot, then what does that say about me?”

I pinch my phone against my shoulder as I load my laptop into my bag and close the door to the neurobiology lab behind me. “It doesn’t say a damn thing about you. What it says is that he thought he was just dating a hot artsy Asian girl, and he was shocked to find you in possession of both a spine and a mouth.”

“But getting dumped suuuuuuucks,” she groans.

“No, you don’t,” she fires back, and the zinger makes me smile.

June says I’m cocky about relationships because I’ve never been on the receiving end of a breakup; I prefer to think I’ve just been lucky.

“Listen to me. You are way too good to be moping over this little turd. He is so not worth your time that I’m insulted I even have to remind you.”

She snorts. “Thanks, I guess?”

“I mean it. But if you are going to mope, do you want to do movie night? Clueless and ice cream?”

“Aren’t you meeting up with Ollie?”

“Yeah, but I can cancel. I’d rather hang out with you if you’re bummed.”

“Ah, you’re the best. I’ve actually got dinner plans with Pooja, but thanks for volunteering for breakup therapy.”

“Always, my cherub. Hasta mañana. Say hi to Pooja for me.”

The warm summer evening hugs me when I step outside, along with the rush of the city. I remember hearing that a lot of people didn’t like Columbia’s new science building when it  FIrst went up, and it’s true that the glass-and-steel tower looks like a futuristic Tetris block slammed down amidst the old brick grandes dames that surround it. But I love it. The whole point of science is to push forward, even if it offends some sensibilities along the way. To me, this building is about discovery and innovation. And that’s the way it should be.

My stomach is grumbling by the time I reach the bar where I’m meeting Ollie. This place is nothing fancy, but it has the most delicious burgers in Ollie’s neighborhood, possibly even the whole city—and we’d know, because we’ve spent the last four years surveying. Noise lunges at me as soon as I open the door: the roar of a hundred conversations, all competing with the squealing guitars of whatever classic rock song is blasting from the speakers. The song sounds vaguely familiar, which means it’s got to be one of Ollie’s favorite bands; I couldn’t begin to guess at which. Ollie has four thousand favorite bands. They all sound vaguely familiar.

I push up on my tiptoes to scan the room for him. Crowds actIvate my barely latent short person’s rage, especially because I detest high heels, the universal short girl’s coping mechanism. I had a guy tell me once that I ought to consider wearing heels if I was going to bitch so much about being short. I told him he ought to consider dating other people.

Swaying like a car dealership tube man on the tips of my Chucks, I  finally spot Ollie at the far end of the room, leaning on his elbows against the dark wood bar. And I’m sorry, I don’t care what anyone says; my boyfriend is the dreamiest thing I’ve ever seen. Now, to be clear, it’s not like I’m facing opposition on this front; it’s just that any time I mention in passing how hot he is, June rolls her eyes. Which—okay. June rolling her eyes probably has more to do with fatigue with me talking about Ollie than it does with her opinion about Ollie himself. She does put up with an awful lot of it.

But look at him, for god’s sake. Although the overall effect falls under “boyishly handsome,” his face has this amazing contradiction to it: fair Germanic skin, scruffy brown hair and friendly chin, paired with high cheekbones, sharply hooked eyebrows, a long, narrow nose, and thin lips that can look severe when they’re not curved into his usual devilish smile. And he’s got the most amazing eyes—the gray-blue of chambray cloth, with a ring of dark slate at the edges. Tonight, he’s wearing his usual getup for his job as an advertising account manager—dark jeans and a vintage T-shirt that his shoulders  fill out to perfection. He is, quite frankly, delicious. And because he’s so absorbed in his phone, that means I can sneak up behind him and give him a righteous slap on the ass.

The phone drops to the bar with a clatter, and then he spins around and I shriek because all of a sudden my feet are off the ground.

“Put me down!” I squeal, but he just grins up at me and keeps his arms clamped around my hips while I attempt to pry myself free.

“That’s what you get,” he says, then turns to smile at the girls next to us, who are giving us the stink eye. “Excuse us. Just need to punish my girlfriend a little bit here.” Once they get a load of him, they giggle as if they’d rather like him to punish them, too.

“Bad idea to keep a hungry woman away from food, Oliver,” I say, pushing at his chest until he lets me slide down.

“Good point. Come on, I staked out a table in the back.” He gives me a quick kiss and takes my hand to lead me to the open two-top. Which turns out to be a bar-height table. With barstools. At which I cannot reach the footrest.

Ollie makes innocent eyes at me when he catches my glare. “What? You can totally make it this time. I think you might have grown,” he says, hovering his palm over my head as if he’s measuring me. I smack his hand away and flounce into the seat.

Over burgers and beer, we catch each other up on the past few days. The conversation turns, inevitably, to the plans for our upcoming trip to his family’s house on Seneca Lake in western New York. We’re leaving next Friday afternoon, and I’m so excited to ditch the city for a week of boating and bonfires and laying out and grilling that I can barely function.

“Oh hey,” I say to Ollie, “I wanted to ask you something. Is it okay if June comes with us? She was supposed to go with Rick the Dick to his Hamptons share, but that mosquito of a relationship just met its speeding windshield, so now she’s gonna be stuck in the city over the holiday.”

“June in a Hamptons share?” He cranes an eyebrow. Ollie can make an entire point with a single eyebrow. When I attempt it, I look like I have a tic.

“Your skepticism correlates with the windshield splat,” I say, pointing a French fry at him. “And thus ends June’s I-banker experiment.”

He shakes his head, bemused. I will admit that, because we have been together for four years, Ollie and I can be a little smug. But honestly, the guys June has been dating in the three years since we left college seem to befuddle her as much as they do us. It’s like she says yes to anyone who asks her out without caring whether she’s actually interested.

“So, is that cool with you if she comes with? It would be super fun to have her along.”

Ollie glances down at his plate, lip pinched in his teeth. “Um, I guess so. Let me check with my mom, though.”

“You guess so? Babe, you know she’s not going to mind. There’s nobody else staying with us besides Caleb, right? So June can have the guest room.”

“Mm. Unfortunately, June would be sharing the guest room with you. We’re going to have to do the late-night tiptoe routine again.”

“Still?” I screech. “For god’s sake, we practically live together!”

“Oh good lord, Ollie,” I say, slumping back in my chair. “You are a twenty-six-year-old man without a religious hair on your body. Your mother seriously expects us all to participate in the delusion that you’re a virgin?”

This time he puts both eyebrows into it. “Well, I don’t exactly want to argue the case. I’m not sure she’s ever recovered from walking in on Cal and his high school girlfriend.”

I sigh, knowing I’m defeated. I’ve always loved how close Ollie is with his mom, so if the flip side of that means he humors her bizarre insistence on separate bedrooms, then it’s a small price to pay. And despite Ollie’s hesitation about June coming up for the week, I know Rachel won’t mind.
Now all I’ve got to do is convince June to join us.

A native of Virginia’s Blue Ridge Foothills, Bethany Chase is the author of The One That Got Away and Results May Vary. She lives with her husband and son in New Jersey. 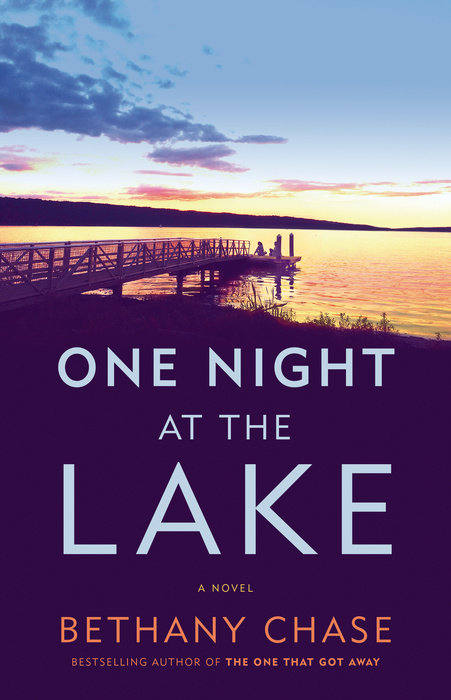