The Power of Female Friendship to Drive Successful Businesses

Get inspired by the women who discovered that working with your best friend can be the secret to professional success—and maybe even the future of business—from the co-founders of the website Of a Kind.

When Erica Cerulo and Claire Mazur met in college in 2002, they bonded instantly. Fast-forward to 2010, when they founded the popular fashion and design website Of a Kind. Now, in their first book, Cerulo and Mazur bring to light the unique power of female friendship to fuel successful businesses. Drawing on their own experiences, as well as the stories of other thriving “work wives,” they highlight the ways in which vulnerability, openness, and compassion—qualities central to so many women’s relationships—lend themselves to professional accomplishment and innovation.

Featuring interviews with work wives such as Amanda Hesser and Merrill Stubbs of the influential food community site Food52, Ann Friedman, Aminatou Sow, and Gina Delvac of the hit podcast Call Your Girlfriend, and Misty May-Treanor and Kerri Walsh Jennings of Olympic volleyball fame, Work Wife addresses a range of topics vital to successful partnerships, such as being co-bosses, tackling disagreements, dealing with money, and accommodating motherhood. Demonstrating how female partnerships in the office are productive, progressive, and empowering, Cerulo and Mazur offer an invaluable roadmap for a feminist reimagining of the workplace.

Fun, enlightening, and informative, Work Wife is a celebration of female friendship and collaboration, proving that it's not just feasible but fruitful to mix BFFs with business.

“Is the old adage ‘Friends and business don’t mix’ true? Not according to college friends Cerulo and Mazur, who translated their love of fashion and desire to support emerging fashion designers into a successful business, the e-commerce site Of a Kind. . . . By exploring topics such as setting expectations, defining roles, dividing responsibility, dealing with finances, and addressing disputes, they deftly demonstrate how female friendships produce empowering business partnerships. . . . This insightful, engaging work is an essential guidebook for friends considering a business collaboration.”—Library Journal (starred review)

An excerpt from Work Wife

Having a work wife means sharing the burden—and the privilege—of building something, knowing there’s someone to turn to who’s accountable on both a personal and professional level, and weathering the lows and celebrating the highs as a team (ideally with a balloon drop—which, yes, we’ve done, though we had to blow up the balloons ourselves). But identifying someone with work-wife potential and then laying the groundwork for that perfect match isn’t easy. Even when the pairing comes somewhat naturally via friendship or past work experience, it still takes effort to suss out whether a relationship is partnership material. So what sorts of friendships are up to the task? Are there ways to test the waters before cannonballing in? Given all the risk inherent in a fledgling partnership, how does one go about evaluating whether a pairing will be a good long-term fit?

For us, eliminating some of the fear inherent in making such a big commitment meant looking backward before we looked forward. When we came up with the idea for Of a Kind in 2010, we’d never started a business together (or independently, for that matter), though we had worked together in some capacity—and by that, we mean we had taken a college extra-curricular way too seriously. As undergrads at the University of Chicago in the early aughts, we both served on the Major Activities Board. (Note: There was no Minor Activities Board. The name remains a mystery.) We were the group that was responsible for bringing boldface-name musical acts to cam- pus. It’s a little curious that we landed there, given that we both call any show without seating a “stand-up concert,” uttered with wide-eyed distaste, typically in the context of turning down an invitation from our husbands (e.g., “Yes, I’m free that night, but if it’s a stand-up concert, I’m definitely not going.”). Our best guess as to why this held any appeal is this: We were power-hungry. We got to run around wearing mic’d headsets! It was intoxicating! So, for a couple of years, about once a quarter, we got a crash course in what it would be like to have a pseudoprofessional relationship with each other and about a dozen of our peers. In between, we’d hold weekly meetings, where Claire would attempt to abstain from over-sharing about her dating life, and Erica would send minutes to a group of people, some of whom thought sullenness was a virtue, signed “xoxo.”

A half decade later and eight hundred miles east in NYC, we didn’t know so much more about business per se, but we knew a lot more about each other and how we each operated in the world as newly minted grown-ups. In navigating our early twenties together, we’d proven that we were capable of stepping outside our comfort zones and that we could break self-written rules when the situation called for it. It was that comfort level—and a dash of naïveté—that gave us the chutz- pah to start cobbling together the idea for Of a Kind. When we came up with the initial concept, it merged our two—up to that point, totally separate—professional passions into one thing we were vibrating with excitement about. So much of our shared experience as friends was present in the idea: Our appreciation for the fact that if you grew up in small towns like we did, it was hard to uncover the work of small makers; our compulsive desire to discover new things and then promptly learn everything there was to know about them; and our dream of being our own bosses. These were qualities and tendencies that we’d nurtured in each other over the years in the ways that friends do—through late-night conversations, all-day shopping trips, and hundreds of links shared over Gchat.

We sensed there was something about our relationship that could support the weight of a business, but our initial pull toward each other had more to do with the fact that we couldn’t conceive of going so deep with someone we didn’t know as intimately—whose parents we hadn’t had dinner with, whose exes we hadn’t skewered, whose deftness at leading college students through the paces of large-scale event planning we hadn’t witnessed. A comfort level with vulnerability felt like a requirement, and as time went on, the fact that we had played at being professionals together started to feel essential, too. We had a handle on each other’s work habits and ethics that made the whole venture feel like jumping into the deep end, but not into potentially shark-infested waters.

Working together before partnering emerged as a theme from the conversations we had with other work wives: Before going whole hog with their online kitchen and home destination, Food52, Amanda Hesser called upon Merrill Stubbs to help research and recipe-test for a cookbook she was writing. Jewelry designers Lizzie and Kathryn Fortunato played at what having a joint business would be like in their late teens, selling statement necklaces to sorority girls out of their college dorm room. Kim France and Andrea Linett started as col- leagues at Sassy magazine before becoming neighbors, besties, and then the creative masterminds behind Lucky magazine.
Turns out, the most stable companies are founded by former coworkers, as Harvard Business School professor Noam Wasserman discovered when he studied nearly ten thousand founders of technology and life science startups. Close colleagues share coffee runs and dating stories . . . but also the crushing pressure of deadlines. They have the intimacy of friendship and the experience of getting the job done together. Mutual admiration combined with an awareness of professional strengths and weaknesses is crucial when starting a business.

Take Sherry Jhawar and Allison Statter, the founders of the talent and influencer agency Blended Strategy Group, who developed a working relationship over several years before deciding to start a business together. Sherry was the global head of marketing at the beauty startup turned juggernaut EOS (of egg-shaped lip balm fame) and Allison was a talent manager, working with the likes of Christina Aguilera and Jennifer Hudson. They’d done deals together, and they each liked how the other thought. When Allison decided it was time for her to start her own thing—she’d worked for her dad, a music industry veteran, most of her career and was ready to spread her wings—she sensed that Sherry was the partner for her. “We both just gravitated toward each other, really enjoyed working together, and had an immense amount of trust,” Allison says.

Allison popped the question while still on maternity leave with her third child . . . and then popped it again when Sherry didn’t take the bait the first time. It was on vacation in Thai- land that two of Sherry’s girlfriends said, “Why wouldn’t you explore it at least? Exploring it doesn’t mean that you’re saying yes.” A lightbulb went on for Sherry: “I’m kind of a binary person, and I forget that there’s gray.” On the plane home, she wrote an email to Allison saying they should dig into the idea. She’d y from her home in NYC to Allison’s in L.A. for a few days so they could flesh out the concept for what would, in 2015, become their agency, which forges direct relationships between celebrities and influencers and brands. Those few days together filled the gaps in knowledge that their shared work history couldn’t: They knew they vibed professionally, but, as Sherry says, “it was our personal values—and how close we both are to our parents and our siblings” that sold them on work-wifing together. She continues, “Ultimately, we operate, as humans, in the same way. I realized that’s going to be the core of what’s going to help us through difficult decisions.” It was enough to get Sherry to make the permanent move across the country—where the very first email that Allison ever sent her now hangs framed in her office.

Jessica Morgan and Heather Cocks, the creators of a humor blog about celebrity fashion called Go Fug Yourself, are part of this coworkers club, too. They had been friends first, having met on the internet when they were both writing television recaps, and later bonding when Heather moved to L.A. practically friendless. Their professional relationship started when Heather hired Jessica to work with her on a wrestling reality show (that they quite earnestly insisted to us was actually good).

During that period, they learned how they each approached work and authority and discovered that they were aligned on their thinking around both.

The Power of Female Friendship to Drive Successful Businesses 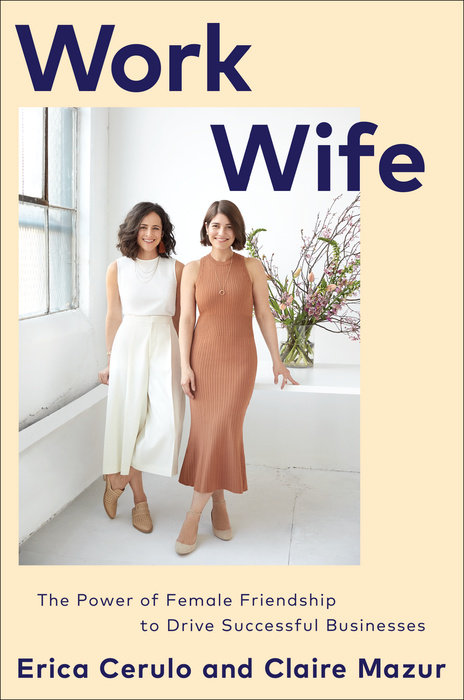