Mies van der Rohe, Edith Farnsworth, and the Fight Over a Modernist Masterpiece

The true story of the intimate relationship that gave birth to the Farnsworth House, a masterpiece of twentieth-century architecture—and disintegrated into a bitter feud over love, money, gender, and the very nature of art.

In 1945, Edith Farnsworth asked the German architect Mies van der Rohe, already renowned for his avant-garde buildings, to design a weekend home for her outside of Chicago. Edith was a woman ahead of her time—unmarried, she was a distinguished medical researcher, as well as an accomplished violinist, translator, and poet. The two quickly began spending weekends together, talking philosophy, Catholic mysticism, and, of course, architecture over wine-soaked picnic lunches. Their personal and professional collaboration would produce the Farnsworth House, one of the most important works of architecture of all time, a blindingly original structure made up almost entirely of glass and steel.

But the minimalist marvel, built in 1951, was plagued by cost overruns and a sudden chilling of the two friends' mutual affection. Though the building became world famous, Edith found it impossible to live in, because of its constant leaks, flooding, and complete lack of privacy. Alienated and aggrieved, she lent her name to a public campaign against Mies, cheered on by Frank Lloyd Wright. Mies, in turn, sued her for unpaid monies. The ensuing lengthy trial heard evidence of purported incompetence by an acclaimed architect, and allegations of psychological cruelty and emotional trauma. A commercial dispute litigated in a rural Illinois courthouse became a trial of modernist art and architecture itself.

Interweaving personal drama and cultural history, Alex Beam presents a stylish, enthralling narrative tapestry, illuminating the fascinating history behind one of the twentieth-century's most beautiful and significant architectural projects.

An excerpt from Broken Glass

“I give you my Mies van der Rohe.”

Mies van der Rohe, who slammed like a gray-suited iceberg, into Edith Farnsworth’s life on that chilly Chicago night, had traveled a sinuous and improbable path from Aachen, Germany, to the cozy intimacy of a Gold Coast dinner party.

Maria Ludwig Michael Mies was born in 1886 and attended the Aachen Cathedral school, studying in the shadow of one of Europe’s most gorgeous cathedrals, a Carolingian-Gothic masterpiece built on the orders of Charlemagne himself. His father ran a masonry business. Mies spent two years in a trade school, then worked as a bricklayer and, ultimately, as a draftsman, after sending his drawings to a Berlin architectural firm that proved eager to hire him. No matter how far Mies traveled, the family business left its stamp. For all his life Mies admired his brother Ewald, a master stonemason who took over the business from their father, and Mies frequently quoted his father, invoking the stonemason’s obsession with detail. Why should we toil and sweat over artistic details at the top of a cathedral spire, one might ask, when literally no one can see the work up there? “God can see it” was the axiomatic response of the Aachen tradesmen. It was a lesson Mies never forgot.

Though he would go on to be an academic leader and a successful teacher and mentor to several generations of architects, Mies—like Frank Lloyd Wright and Charles-Édouard Jeanneret (Le Corbusier)—never spent a second in an architecture school.

By age twenty-two, after working as an apprentice for the renowned furniture designer and architect Bruno Paul in Berlin, Mies landed a job as a draftsman in the office of Peter Behrens, one of the most progressive architects in Germany. (Both Le Corbusier and Bauhaus co-founder Walter Gropius cycled through the Behrens office during this time. Mies’s tenure overlapped with that of Gropius. Le Corbusier later said he “ran into [Mies] once in the doorway of the office. He was on his way out, I was on my way in.”) Mies clearly inspired confidence. Behrens assigned his young assistant to oversee construction of the German embassy in St. Petersburg, Russia.

Like almost all young German men, Mies found his career upended by military service in World War I, as traumatic an experience for the young designer as for everyone around him. Mies never saw combat; an appendectomy put him in the hospital for two months. (“His nerves are in the worst shape,” a family member reported.) Assigned first to a headquarters job in Berlin and subsequently to an engineering detail in Romania, he reportedly clashed with a superior officer, had a love affair with a Gypsy, and was generally miserable. His closest friend in the army, the sculptor Wilhelm Lehmbruck, committed suicide shortly after their service.

Rebounding from what has been alternately described as a nervous breakdown or a crisis of professional confidence, Mies embarked on a career as a solo practitioner after the war. Initially, he designed homes for wealthy patrons he met as an up-and-coming young architect. According to his oldest daughter, Georgia, Mies cut a dashing swath through Berlin society:

My father—tall, quite slender, with an imperial stride, his head always raised high—looked like a Spanish grandee or a Brazilian hacienda owner. An Arbiter Elegantiarum [judge of taste and etiquette], always dressed to the nines. He basically lived above his means his entire life.

In that milieu he met his future wife, Adele (Ada) Bruhn, the beautiful brown-haired daughter of a wealthy industrialist. The twenty-five-year-old Mies courted her passionately (“I want to love you with my hot young heart”), fathered three daughters in three years, and just as quickly demonstrated his impatience with domestic life.

The dancer Maria Wigman, who shared a house with Adele before her marriage, testified to intense conflicts during the couple’s brief periods of cohabitation. Mies pursued numerous casual out-of-town liaisons, many of the assignations arranged at the couple’s weekend property west of Berlin. “He had one girl there,” Wigman recalled, who was known as “The Horse,” because she resembled one. “Yes, I know,” he would say to me, “she’s no beauty. But she’s a dancer, and we are fine together. And it is great fun.” He would go on for hours about his Horse.

I could never bring myself to say, “Ludwig, how could you?!” There was something about him that thrived on freedom, required exemption from convention. It was his way, and he blossomed. . . . I do know the whole thing didn’t work.

The marriage lasted barely five years in practice, though the couple never divorced, and Mies never remarried. Marianne Lohan, Mies and Ada’s second daughter, remained clear-eyed about her father’s life choices. “My mother never stopped being in love with my father,” she said. “She would have given Mies a divorce but a no-divorce was convenient for him. It gave him freedom.”

Mies launched himself on a life of unconventional relationships, with an emphasis on serial proto-monogamy, coupled with a cool, sometimes cold, indifference to family obligations. As his marriage wound down, Mies began an affair with the talented designer Lilly Reich that would last as long as he stayed in Germany, almost until the beginning of World War II. The self-effacing Reich co-designed the interiors of many of Mies’s European masterpieces and co-created much of the famous furniture attributed to him.

Mies, whom we often see in pictures taken at the dawn of middle age, lumbering along in a dark overcoat underneath a nondescript homburg hat, was a handsome young man navigating the waters of the art and architecture avant-garde in Weimar Germany. Lora Marx, his companion in Chicago, recalled that “everything about him was attractive. He was very shy. He never engaged in small talk, except with people who would talk to him about architecture or art. He was innocent, he was not a worldly man.”

It was during this period of career advancement and personal change that Mies indulged in a personal reinvention. He abandoned the name Maria Ludwig Michael Mies and rechristened himself Ludwig Mies van der Rohe, tacking his mother’s surname Rohe onto the Dutch particles suggesting nobility. (To assume the name “von der Rohe” would have been unthinkable in title-conscious Germany.) He also added an umlaut to the “e” of his new surname, making Mies a two-syllable word. Minus the umlaut, the word meant “seedy,” “miserable,” or “awkward.” Mies’s first biographer, Franz Schulze, wrote that the Bruhn family’s only objection to the ambitious young man their daughter intended to marry was his last name, which may have prompted the change. Later in life he told his daughter Georgia that he was a “self-created” man.*

*Architect and critic Christian Bjone calls name changes “an overt Freudian tradition for modern architects as shown in the self re-naming of Frank Lloyd Wright and Charles Rennie Mackintosh. This continues to current times with the totally invented names of Frank Goldberg changing into Frank Gehry and Jon Nelson Burke into Craig Ellwood.” (Gehry’s birth name was Ephraim, not Frank.)

During the 1920s, Mies primarily designed upper-class residences, although he was simultaneously publishing avant-garde designs in the progressive arts journal G: Materials for Elemental Form-Creation, which he supported financially and co-edited. In 1927, he was the chief architect of an ambitious workers’ housing complex in Stuttgart that united most of Europe’s best-known architects (Le Corbusier, Behrens, Gropius, J.J.P. Oud) to create affordable, attractive worker housing. Allied bombing razed almost half of the twenty-one buildings that comprised the Weissenhofsiedlung (Weissenhof Estate, or Settlement) during World War II, but Mies’s low-rise, modernist apartment building still stands. UNESCO added a two-family Weissenhof home designed by Le Corbusier and his cousin, Pierre Jeanneret, to its list of World Heritage sites in 2016.

ALEX BEAM has been a columnist for The Boston Globe since 1987. He previously served as the Moscow bureau chief for Business Week. He is the author of three works of nonfiction: American Crucifixion, Gracefully Insane, and A Great Idea at the Time; the latter two were New York Times Notable Books. Beam has also written for The Atlantic, Slate, and Forbes/FYI. He lives in Newton, Massachusetts.

Mies van der Rohe, Edith Farnsworth, and the Fight Over a Modernist Masterpiece 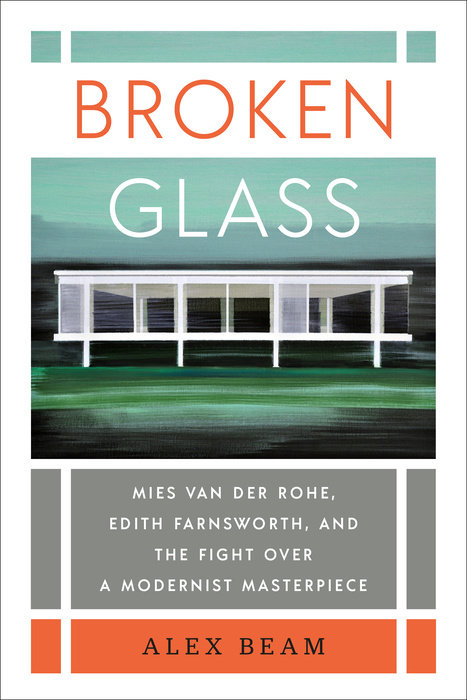