A Rejection of Destructive Politics and a Return to Principle

NEW YORK TIMES BESTSELLER • “A thoughtful defense of traditional conservatism and a thorough assault on the way Donald Trump is betraying it.”—David Brooks, in his New York Times column

In a bold act of conscience, Republican Senator Jeff Flake takes his party to task for embracing nationalism, populism, xenophobia, and the anomalous Trump presidency. The book is an urgent call for a return to bedrock conservative principle and a cry to once again put country before party.

I am a conservative.

But today, the American conservative movement has lost its way. Given the state of our politics, it is no exaggeration to say that this is an urgent matter.

The Republican party used to play to a broader audience, one that demanded that we accomplish something. But in this era of dysfunction, our primary accomplishment has been constructing the argument that we’re not to blame. We have decided that it is better to build and maintain a majority by using the levers of power rather than the art of persuasion and the battle of ideas. We’ve decided that putting party over country is okay. There are many on both sides of the aisle who think this a good model on which to build a political career—destroying, not building.

And all the while, our country burns, our institutions are undermined, and our values are compromised. We have become so estranged from our principles that we no longer know what principle is.

America is not just a collection of transactions. America is also a collection of ideas and values. And these are our values. These are our principles. They are not subject to change, owing to political fashion or cult of personality. I believe that we desperately need to get back to the rigorous, fact-based arguments that made us conservatives in the first place. We need to realize that the stakes are simply too high to remain silent and fall in line.

That is why I have written this book and am taking this stand.

An excerpt from Conscience of a Conservative

I will start by saying that I regret having to write this book.

I regret it because its necessity is a sign that the American conservative movement, which has been a force for great good to our country and to the world, is lost. This book aims to describe how it went wrong, and why, and how it might correct course. Given the state of our politics, it is no exaggeration to say that this is an urgent matter.

Conservatives can hold no one else responsible for this. It is a crisis of our own making. The good news is that fixing American conservatism is both of vital importance to our civic wellbeing and eminently achievable. But to do so, we have to be honest about what has happened.

I am a committed conservative. That means that I believe in the power of conservative principles to transform lives, lift countries, alleviate suffering, and make people prosperous and free. I strongly believe that given the choice between free markets and free minds versus more government control over our lives, the United States will almost always choose the conservative path.

But the question has become: Will “conservatives” choose the conservative path? Or will we instead sacrifice principle to do what is easiest and most politically expedient? When it comes to the election of 2016, well, we already have the answers. As conservative principle retreated, something new and troubling took its place. Going forward, those questions remain open, the answers remain unclear, and the early signs are troubling.

I grew up on a cattle ranch in northern Arizona, where conditions were spartan and life was what you made it. That experience taught me the value of standing alone sometimes, and it has everything to do with why I am now writing this book. And for the ultimate example in standing alone, we conservatives owe a great debt to a towering figure from Arizona, Senator Barry Goldwater, who more than fifty years ago stood alone when it was extremely difficult to do so, and in so doing started a movement of conservatives that twenty years later would see the election of one of our greatest presidents, Ronald Reagan. That this book takes its name from Senator Goldwater’s seminal book is an homage to both his fierce independence and his visionary leadership.

Goldwater’s fight was for the soul of the country, and so, too, is ours. When he wrote this in his own time, he may as well have been writing it in ours: “Though we Conservatives are deeply persuaded that our society is ailing, and know that Conservatism holds the key to national salvation—and feel sure the country agrees with us—we seem unable to demonstrate the practical relevance of Conservative principles to the needs of the day.”

The effect that Goldwater had on my state and on the way that Americans think about their relationship to their government cannot be overstated. It is our relationship to our government and the foundational institutions of American liberty that are now under severe stress.

That conservatism has become compromised by other powerful forces—nationalism, populism, xenophobia, extreme partisanship, even celebrity—explains part of how and why we lost our way. That we who call ourselves conservative have been willing partners in that compromise explains the rest.

Going forward from here, for Americans to have the benefit of conservative principles, we must once again have the benefit of truly conservative leadership. Unabashed, unafraid, unreserved conservative leadership. But almost two decades into the new century, we conservatives have suffered a crisis of confidence, which in turn has led to a crisis of principle. In the election campaign of 2016, it was as if we no longer had the courage of our convictions and so chose to simply abandon conviction altogether, taking up instead an unfamiliar banner and a new set of values that had never been our own.

That an enigmatic Republican nominee succeeded in becoming president resolves nothing in terms of the future of American conservatism. In fact, an enigma by definition is a riddle, and riddles are meant to be solved. We—as conservatives and as Americans—have a lot of solving to do, to restore principle and look to the future.

Politicians can be herdlike creatures, too often prone to taking the path of least resistance. I understand the impulse and have often sought that well-trodden path myself. I must say, it would have been much easier for me to have taken that path this time as well and fallen in line with most in my party. But in good conscience, I could not. The stakes, for the future of conservatism and for the future of our country, are simply too high.

Jeff Flake is the junior United States senator from Arizona. He is a fifth-generation Arizonan who was raised on a cattle ranch in Snowflake, a town named in part for his great-grandfather. Prior to his election to the U.S. Senate, Flake served in the U.S. House of Representatives from 2001 to 2013, representing the East Valley. Jeff Flake and his wife, Cheryl, live in Mesa and have five children.

A Rejection of Destructive Politics and a Return to Principle 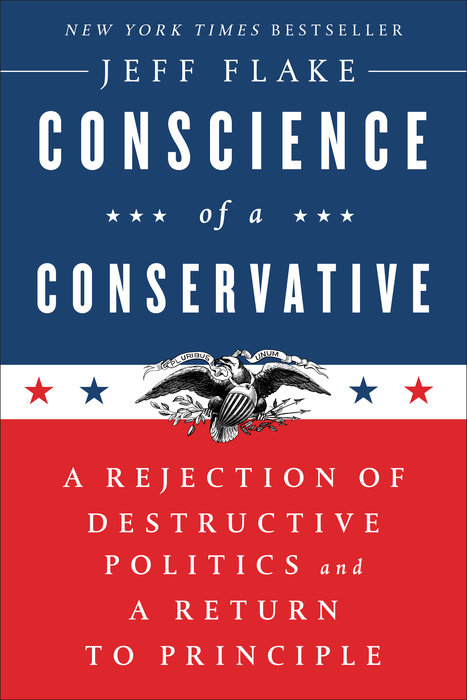