The quintessential depiction of 1980s New York and the downtown scene from the artist, actor, musician, and composer John Lurie

“Ferocious and wise, funny and tragic, raging and forgiving, and I loved every page.”—Nick Flynn, author of Another Bullshit Night in Suck City

In the tornado that was downtown New York in the 1980s, John Lurie stood at the vortex. After founding the band The Lounge Lizards with his brother, Evan, in 1979, Lurie quickly became a centrifugal figure in the world of outsider artists, cutting-edge filmmakers, and cultural rebels. Now Lurie vibrantly brings to life the whole wash of 1980s New York as he developed his artistic soul over the course of the decade and came into orbit with all the prominent artists of that time and place, including Andy Warhol, Debbie Harry, Boris Policeband, and, especially, Jean-Michel Basquiat, the enigmatic prodigy who spent a year sleeping on the floor of Lurie’s East Third Street apartment.

It may feel like Disney World now, but in The History of Bones, the East Village, through Lurie’s clear-eyed reminiscence, comes to teeming, gritty life. The book is full of grime and frank humor—Lurie holds nothing back in this journey to one of the most significant moments in our cultural history, one whose reverberations are still strongly felt today.

History may repeat itself, but the way downtown New York happened in the 1980s will never happen again. Luckily, through this beautiful memoir, we all have a front-row seat.

An excerpt from The History of Bones

Just a speck. At the top of its arc, a mystical thing suspended against blue. Then it would come hurtling down and thwack to the earth. Always out of my reach.

My father could throw a ball, incredibly high, straight up into the air. I loved being hypnotized as it hung up against the sky, this thing that was no longer a ball. It wasn’t really even a game of catch, because I could never catch them at that age.

We used to sit on the couch listening to the stinking Red Sox on the radio. I loved the smell of him, there was warmth in it.

My dad laughed. He was waking me up to go fishing, and this was something I said that was left over from a dream.

When I was a kid we used to go fishing on Saturday mornings. He’d wake me really early and we’d go out, both so tired we’d be laughing like idiots at everything. Boat stuck in the reeds. Incredibly amusing! You had to be there.

On the drive home, we saw an old lady in a fur coat hunched over the wheel of a convertible sports car. Her white hair flapping wildly in the wind. She pulled alongside us, hovered there for a moment, and then whizzed off, like we were standing still. Tears rolled down my dad’s face.

He wasn’t much of a fisherman and didn’t take it seriously. He just liked to be out in a boat with his son on a nice morning. He called me “Boy Boy.”

“You want to go get something to eat, Boy Boy?”

The throws got lower and lower until it wasn’t so exciting anymore.

I went to high school in Worcester, Massachusetts. A horrible place, Worcester has a dome over it so that God is not allowed in.

The first thing that emerges when I think of Worcester is a metal pole.

I am familiar with its molecules. I know its deepest essence.

The pole was a railing around someone’s front yard on Pleasant Street, near Cotter’s Spa. It was about two and a half feet off the ground. Steve Piccolo and I used to try to balance on it and then walk from one end to the other. We’d get halfway, wobble, and then fall off. We never made it all the way to the end. One night, when I was fifteen, we took mushrooms and crossed it several times with ease. That was how I got to know the metal pole on a molecular level. That was the same night we went into Friendly’s, grinning insanely, and said, “We’d like to exchange these quarters for ice cream.” We held the quarters in the palms of both hands, displaying them like they were gold doubloons.

They threw us out.

The first time I had sex was with a girl named Crystal. I was sixteen and Crystal was, I guess, twenty-five. We were in a hippie crash pad, sitting at this filthy kitchen table strewn with pot seeds and Twinkie wrappers. After the last person had passed out, we found ourselves alone. Crystal was a groupie and very proud of it, so I thought I had a good chance, but had no idea how to go about it. I sat there for a long time, not knowing what to do. Finally, I summoned the courage to take her hand and put it inside my fly. Crystal, not resisting, said with complete indifference, “I guess we can ball.” We went into this crummy room with a mattress, with no sheets, on the floor. She took off her clothes. I got on top of her and came in eleven seconds.

Crystal was rumored to have slept with Jimi Hendrix the week before. She gave me gonorrhea. It was nice to have this connection to Jimi through bacterium Neisseria gonorrhoeae.

But at that time, my girlfriend was Jeannie, who lived in the neighboring town of Leicester. A waif of a girl with a beautiful face. My parents had rented a cottage one summer on Thompson Pond and that was how I met her. Though I don’t remember meeting her or how she became my girlfriend.

After the summer was over, to go out and see her, I’d borrow the family car and drive about thirty minutes. This is how I learned to play the harmonica, driving with one hand and messing on the harmonica with the other.

I’d pick her up at her parents’ and we’d drive around. Jeannie would jerk me off while I was driving, but only if I used a certain kind of cologne. I don’t wear cologne anymore. I believe that cologne is a good way to gauge somebody’s intelligence: The amount of cologne being inversely proportionate to the IQ. But this was high school and I had to have my hand jobs, so I’d splash on enough to kill a small animal before going to see her.

Jeannie called my cock “Everett.” She would say that she didn’t like Everett because he was always spitting at her.

By this time my dad was on oxygen. The guy who brought the tanks came and went twice a week. Friendly little guy.

The tanks were set up next to the black chair in the TV room. A thin, blue-green tube ran up to a little thing under his nose. When they said that he was going to be on oxygen, I expected he’d be stuck under a tent or have a big mask. I was thankful that this was a little more dignified.

One night, it was just me and him in the TV room. Aretha Franklin was on the TV, performing live at a college.

It was the first time I had heard Aretha and something shocking happened to me—chills went up through my body. I had never had that happen before, heard a piece of music or witnessed something so brave or so beautiful that it made chills happen.

What is this? This sensation?

I was embarrassed to be moved like that. It was so out of my control.

I didn’t want my dad to notice.

She finished the last song with an explosive crescendo and the audience of white college kids leapt to their feet in a simultaneous roar. The reaction was organic and completely correct.

My dad looked so sad and disappointed when he said, “I can see they are legitimately moved. But I don’t feel it at all.”

Isn’t that wonderful? He doesn’t go, “You kids, your music stinks,” because he doesn’t feel it. He sees there is something happening but he doesn’t have the receptors for it, like evolution has been cruel and left him behind.

I was supposed to watch my dad one night but instead went to a club downtown. When I was fifteen, I was mostly hanging out with the black kids, who lived on the other side of Main Street. Playing basketball, going to dances. The black kids were cool.

This wasn’t a dance for kids. Most of the people there were twenty to twenty-five. I was always the only white person there, except for maybe the odd, horrifying blond woman. This was a fairly wild crowd. There were fights. A very muscular air. There were knives and guns.

The next day, Sunday, there was a big scene because I hadn’t stayed home to watch my dad. My mom was always on the warpath on Sundays and she was holding a family council, going on and on about how I had to be aware of my responsibilities to the family. I thought she was being overly dramatic, per usual—my dad was upstairs asleep, she was playing bridge, what’s the big deal, I just decided to go out. This was my dad, did someone really have to stay home and take care of him?

He sat there in his robe and pajamas, not saying anything, looking at the floor.

My dad was beautiful. He was a beautiful man.

When he was in college, he was the bright star of NYU’s literary scene, bursting with potential. He wrote the entire literary magazine under multiple pseudonyms, the other young intellectuals deferring to his greater talents. But when he got out of college, instead of becoming the next James Joyce, as was expected of him, he went off into the South to organize unions for miners. It must have been incredibly rough. But, at sixteen, I didn’t see the bravery in it, nor the altruism. I didn’t know what altruism was.

He started to write his memoirs, but his sickness caught up with him. I thought he had failed. Not because he didn’t finish the book, but because he’d never really done anything of his own. He’d never written any book, when he was supposed to be this great talent. I can’t say that it was disappointment that I felt. It was all the scorn and disgust that a seventeen-year-old psyche could muster toward one’s parents. And he would, now, never be able to do anything about it.

But about a year later, after he was gone, my scorn and confusion were lifted. I was at my cousin’s wedding and all these old guys were coming up to me, showing me great respect. One of them, a short, tough New York Jew with something sweet under the hard cragginess, like Edward G. Robinson, looked me in the eye and said, “You Dave Lurie’s kid?”

Thank you, tough craggy old man. You freed me.

John Lurie is a musician, painter, actor, director, and producer. He co-founded The Lounge Lizards in 1979. In the decades since, he has released albums (including those by his alter ego Marvin Pontiac), acted in films, composed and performed music for television and film, exhibited his paintings throughout the world, and produced, directed, and starred in the Fishing with John television series. His most recent series, Painting with John, debuted on HBO in 2021. 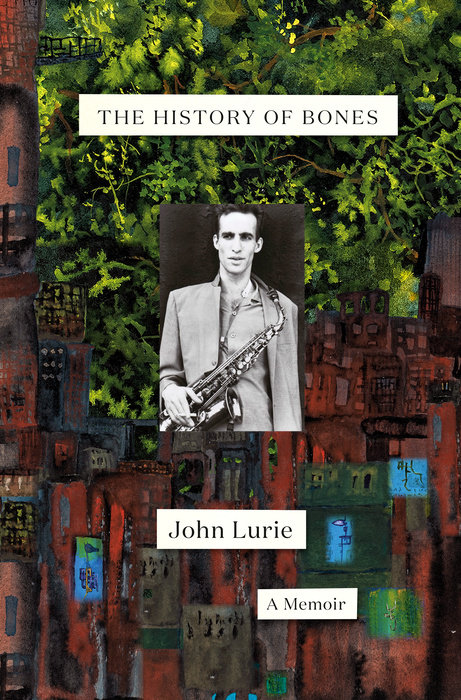