For all who aspire to master brioche, croissant, pâte á choux, or even cookie dough and muffin and cake batter, Margarita Manzke, super-star baker and co-owner of Los Angeles hotspot République, takes bakers through her methods for perfecting texture and amplifying flavors, one inspiring photograph and brilliant trick at a time. With chapters dedicated to teaching each dough or batter and 100 recipes that put the lessons to work, plus more than 125 helpful and inspiring photographs, bakers will discover how to truly elevate their baking, whether they're making Manzke's Instagram-perfect chocolate chip cookies or her Philippines-inflected Halo Halo Cake. Serious home bakers will revel in the game-elevating techniques and irresistible recipe riffs found in Baking at République.

An excerpt from Baking at République

Our pastry case is the first thing customers see every morning, and it is always fully stocked before the doors open—that’s our daily mission. It’s filled with dozens of different kinds of pastries: Brioche tarts studded with fresh raspberries, bomboloni filled with pastry cream or jam, handmade toaster pies filled with fruit and cream cheese, chocolate cake with layers of chocolate pudding and salted caramel, morning buns, croissants, canelés. . . . We bake a giant mound of bread pudding in a cast-iron pan, and customers order it by the scoopful. A cold case is devoted to éclairs, cream puffs, and delicate tarts. There are about fifty kinds of pastries in all.

The first of the pastry department staff arrives at 3:30 am so that everything is in the pastry case by 8:00 am. We probably break one of the first rules of bakeries everywhere—we don’t replenish throughout the day. We make one heroic push in the morning and put everything we have into the case, and as soon as the doors open, the first customers see everything at once. That’s why it’s so important to fill it to the brim. The case should look explosively abundant, and people know that when it’s gone, it’s gone.

The first thing I do when I walk in the side door is put on my apron and say hello to everybody. The restaurant is divided into two sides: savory and sweet. The pastry department takes up two floors on one side. Upstairs are the office and the pastry prep kitchen, where most of the baked goods for the case are made. Downstairs are storage and bread making, with a three-deck Bongard oven from France with a manual loader. I love this oven. I love all our ovens. And the spiral mixers. And the sheeter, which we use to make croissant dough.

The downstairs kitchen is open to the dining room. I’ve always worked in kitchens that were closed—four walls, no windows—and the bakers and cooks couldn’t see anything, including the people. I’ve even worked in a fine-dining kitchen in a small, dark space crammed next to the dishwashing machine. At République, we work in an open space where we can interact with the customers, and they can come up and ask me what I’m making. I might be peeling quince for quince paste or cutting and rolling out bread sticks. It’s really satisfying. It sure beats a tiny kitchen with no windows! I’ve come a long way in terms of working environment.

After I tie on my apron, I check in on my pastry sous chefs and figure out what work needs to be done. Every day is different, but it’s always a mad dash of filling copper molds with canelé batter, baking burger buns for breakfast sandwiches, rolling and shaping baguettes, piping meringues, frying doughnuts, filling bomboloni with raspberry jam, glazing tarts, assembling shortcakes and alfajores, and frosting the cakes. On a typical Saturday morning, we’ll put out several hundred pastries all at once.

The staff starts filling the case by 7:00 am, piece by piece. The first to go in are the savory pastries, such as hand pies and ham and cheese croissants, then the Viennoiserie, such as Danishes, and then the plates of cookies. There’s an order to it, which ends with cream puffs and éclairs in the cold case.

I always wanted an overflowing pastry case, and I thought a lot about how it would be set up. With boards, cake stands, and plates of different shapes and at different heights so that everything displayed would be visible. By 8:00 am, the last of the pastries has been put in place, and there is a line at the door.

This is when the pastry team starts to get ready for dinner and for the next day’s bake-off, making doughs for cookies, scooping it out onto baking sheets, mixing the brioche and pain au lait, measuring out the ingredients for the meringue, cutting baked biscotti for their second baking, and applying the “crumb coat” to cakes. Part of every day is about preparing for the next, so there can be hundreds of pastries all over again.

This Dream Building
When we moved into the building that’s now home to République, I thought it was a miracle. For years, my husband and business partner/chef, Walter Manzke, and I had dreamed of opening our own restaurant.

République was originally set to open in downtown Los Angeles. We spent thousands and thousands of dollars of our own savings negotiating a lease and working with an architect and raising money for the construction. We were taking catering gigs to pay off credit card bills while also paying a lawyer to come up with a business plan and a deal agreement for investors.

We had found a space we loved in an 8,000-square-foot 1920s warehouse. Walter had been the chef at a well-loved restaurant called Church & State in the same downtown neighborhood, and it felt right. But we never could raise enough money for such a big project, and in the meantime, we’d gone through most of our savings. We were discouraged and practically broke. For a minute, we even thought about moving to Las Vegas.

But then, by chance, Walter was introduced to Larry Silverton by our then-partner, Bill Chait. Larry owns the building République is in, which was previously Campanile, the Los Angeles institution founded by Mark Peel and Larry’s daughter Nancy. Nancy already had moved on and opened her Mozza restaurants, and Walter had heard that Mark might be planning on leaving. So he inquired about the building, and Larry looked at him as if he were crazy. But the next week, Larry called Walter and said we should all talk.

From there, everything fell into place— capitalizing the restaurant, getting permits, and finishing construction. Unlike our previous attempt to open a restaurant, it all came together fairly easily. It felt as if it was meant to be.

And the building—Walter believes it’s as much a part of our success as anything. It has soul and history; lots of light, high ceilings, and gothic arches; and a great sense of warmth. The twostory faux-Spanish complex, originally built around a courtyard, is a Hollywood landmark. Charlie Chaplin commissioned it in the 1920s to house his offices, but he lost the property to his wife, Lita Grey, during their divorce. The ground floor was built in a U-shape, intended for shops, surrounding an outdoor courtyard, and the top of the building is a turretlike rooftop tower.

In 1987, Larry bought the building for Nancy and Mark, who built the legendary Campanile and La Brea Bakery there. It was then that the courtyard was covered with a skylight and turned into an indoor space that became the restaurant’s main dining room. La Brea Bakery was located in the southern wing of the building, with a separate entrance. It’s where people lined up down the block for Nancy’s sourdough bread.

A lot of the redesign of the space was Walter’s vision. We felt we had to make the space our own—a place where you could sit down, have a coffee and pastry in the morning, work on your computer, have a casual lunch, and order sandwiches and salads all day. At night, the setting turns into a totally different experience. We tore down the wall that divided the original La Brea Bakery from Campanile; they used to be two separate spaces. Now the entrance to the restaurant is in front of the pastry case, a long, narrow row of counter space that you walk by to reach the dining room.

Walter and his father built the tables and stool seats. With the help of my mom, Veronica, we were able to import yakal wood from the Philippines. They shipped over thousands of tiles and wrought iron, too. Walter’s brother did the metalwork. Out front are the giant steel bowls of three 40-gallon mixers, filled with soil and home to olive trees.

The heart of the restaurant is probably the big wooden butcher-block table in the downstairs bread kitchen that sticks out into the dining room. It was a leftover piece of furniture from the original La Brea Bakery. Although Walter and his dad had to replace the legs, it was a reminder of the history of this building and also of the shoes we would fill.

And then . . . we waited for customers to come. 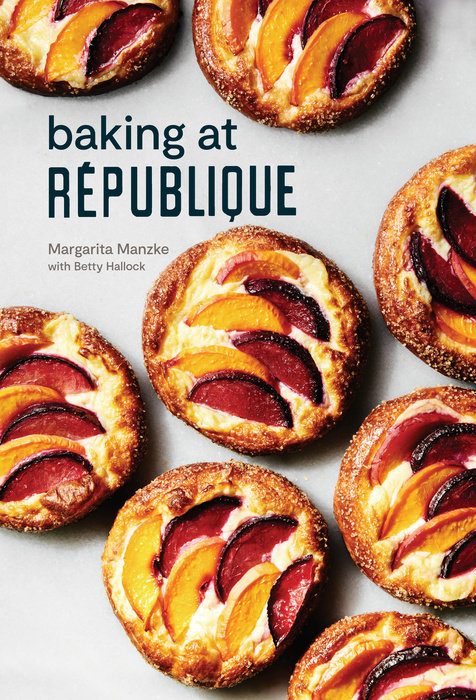