An eye-opening exploration of a unique region of Italy that bridges the Alps and the Adriatic Sea, featuring 80 recipes and wine pairings from a master sommelier and James Beard Award-winning chef.

Bordered by Austria, Slovenia, and the Adriatic Sea, the northeastern Italian region of Friuli Venezia Giulia is an area of immense cultural blending, geographical diversity, and idyllic beauty. This tiny sliver of land is home to one of the most refined food and wine cultures in the world and yet remains off the grid. The unique cuisine of Friuli is what inspires the menu at Frasca, a James Beard Award-winning restaurant in Boulder, Colorado, helmed by master sommelier Bobby Stuckey and chef Lachlan Mackinnon-Patterson.

Meaning “branch” or “bough,” the word frasca refers to the Friulian tradition of hanging a branch outside the family farm as a sign that new wine was available for sale. Friuli Food and Wine celebrates this practice and the wine and cuisine of the Friulian region through eighty recipes and wine pairings. Dishes such as Wild Mushroom and Montasio Fonduta, Chicken Marcundela with Cherry Mostarda and Potato Puree, Squash Gnocchi with Smoked Ricotta Sauce, and Whole Branzino in a Salt Crust are organized by Land, Sea, and Mountains, while profiles of local winemakers and wines, including Tocai, Ribolla Gialla, Malvasia Istriana, and Verduzzo, open up new pairing possibilities. Showcasing the best Friulian wines you can buy outside of Italy as well as restaurant and winery recommendations, this beautifully photographed cookbook, wine guide, and travelogue brings the delicious secrets of this untouched part of Italy into your home kitchen.

An excerpt from Friuli Food and Wine

Friuli is where we truly learned about hospitality. The entire region and its people seem to breathe it. Let me give you an example.

In 2014, our good friend and restaurant peer Sam Beall, owner of Blackberry Farm in Tennessee (one of the greatest hospitality destinations and hotels in the world), asked us to take twenty guests on a cycling trip to Friuli Venezia Giulia (FVG, or simply “Friuli”) in the northeastern corner of Italy. We stayed at La Subida (see page 94), an inn run by the Sirk family (Jŏsko, Loredana, and their children, Tanja and Mitja) that had become our home away from home in Friuli after many years of visiting the area.

On the final day, we opted to cycle to the top of Monte Zoncolan, one of the longest and most classic climbs in the Carnic Alps and a 130-kilometer cycle from La Subida. Ninety-five kilometers into the ride, we had just reached the foot of Zoncolan when we noticed Jŏsko coming up on his motorcycle! He had ridden out to see us off on our climb, which was a huge gesture because the family was hosting a wedding at the hotel that day. Some three kilometers later, while traversing what is one of the steepest paved roads in Italy, we spotted him again—a moment of heartwarming relief from the deep physical pain.

The very last part of the climb is an eight-kilometer stretch that took most of us more than an hour to complete. Passing through a final tunnel to the summit, who should be waiting on the other side? None other than Jŏsko, who greeted us with magnums of Bjana sparkling wine. He sabered the bottles and waited more than an hour for all of the riders to finish, handing each a glass and a piece of home-baked strudel. As soon as the final rider had pulled up, Jŏsko motored back to the restaurant and worked the wedding.

The Sirk family will make you an espresso when it’s still dark outside, scoop fresh yogurt made on the next hillside for your breakfast, or offer bottles of sparkling wine at the end of a long climb. That’s hospitality. And that’s Friuli.

In 2003, Lachlan and I moved to the culinary middle-of-nowhere in Colorado to open a restaurant where the food and wine would be inspired by the relative middle-of-nowhere Friuli Venezia Giulia, Italy. We had both just finished working at the French Laundry in Napa Valley and were looking for a fresh start and complete change from everything we had known. Boulder offered the mountains for cycling and running, but also physical space and head space. Our good friend (and a winemaker) Raj Parr tried to stage an intervention to stop us (along with my wife, Danette) from moving to this charming but frankly somewhat provincial town to open our own place—all to no avail.

The year before our move, we visited FVG with Nate Ready, our opening sommelier. At that point, we had already been seduced by, and were forcefully experimenting with, the wines of Friuli—from producers such as Radikon and Gravner—that are in fashion now but back then were edge-of-the-world-type stuff. The four of us had gotten on a plane to Venice and traveled an hour northeast to the border of Italy and Slovenia for what turned out to be the first of many pilgrimages. And although we had already built up the region in our minds, it exceeded expectations on every level. Nothing intrigued us more than the people, wine, and food of Friuli Venezia Giulia.

FVG is the southernmost piece of what was the Austrian Empire in the early 1800s and, for a brief moment, the Austro-Hungarian Empire in the late 1800s. It also contains a piece of Slavic culture to the west, all of which collide at the port city of Trieste, one of the only major ports of the former Austrian Empire. Access to Trieste brought Austrians everything from spices to coffee beans, and infused Friulano cuisine with elements of many cultures as shipments made their way along the road from the port to Vienna. Trieste was one of the first polyglot cities, combining Jewish and Eastern European cultural traditions in Western Europe. Italians consider FVG to be more Austrian or Slavic than Italian. And the administrative region of Friuli Venezia Giulia as we know it today was not wholly formed and didn’t belong to Italy until 1954. Before that date, Friuli was part-Italian, part-Slovenian, and part-Croatian. In fact, Friuli was once considered the western region of the area that included the eastern region of Venezia Giulia, which was connected to the Adriatic; hence the combined name.

The cuisine of Friuli paints a beautiful picture of this fragmented history. No other part of Italy (with the exception, perhaps, of Sicily) has been influenced by so many cultures and cuisines. FVG has been occupied by the Slavs, the Ottomans, the Venetians, the Austrians, the French (Napoleon brought French grapes to the area), and the Romans (the area was named after Julius Caesar). It’s a little less sunny than Tuscany and a little more mysterious too. This is a place that balances on the fringe of east and west . . . where the food and people are simple yet sophisticated, and the wine is esoteric yet incredibly versatile. This tiny sliver of land is home to one of the most refined food and wine cultures in the world, and yet it remains relatively unknown.

Italy is divided into many different regions: some have the food, some have the wine, but very few have both. Take Bologna, for instance. While the food culture there has depth, you can only drink so much Lambrusco. And Tuscany, with its beautiful sunsets and the rich cultural center of Florence, has incredible Brunellos and Chianti, but the cuisine—Bistecca alla Fiorentina  and all—is less high-wattage and diverse. Sure, you’ll find the occasional pizzeria in Friuli. There is red sauce, of course. But that’s not the jam.

During our first trip to Friuli, Lachlan said, “This is the best Italian food I never knew existed.” Up until that point, he had mainly been cooking at French restaurants in Paris and the United States (like the French Laundry), and his experience with French provisions ran deep. But right away the cuisine of Friuli Venezia Giulia felt like our thing: not only through the prism of wine but also because the dishes felt both familiar and exotic. Tagliolini al Portonat (page 103) is a great example of this, it’s a simple pasta sauced with cream and a hit of poppy seeds that’s deeply infused and wrapped in San Daniele prosciutto. It’s so easy, so delicious, and yet so unlike anything we had seen on American menus. Before we opened Frasca, we had never been to a restaurant in the States that served Toc’ in Braide (page 75), a rich, creamy polenta cooked in a Parmesan broth that is perhaps the most famous recipe in Friuli. Though Lidia Bastianich has shined a light on Friuli’s food and wine (having spent her early childhood in Trieste), the cuisine is still not widely known nor close to popular.

Coming from a place that seems so exotic and mysterious, Friulano cuisine is actually quite accessible and translates well to home pantries and kitchens. When we first visited, we were surprised to find the food to be incredibly straightforward but with little glimpses of unexpected flavors, like anise, dill, cinnamon, caraway, ginger, and smoky paprika, all of which highlight Friuli’s history as a central market in the spice trade. We have always felt that with food and wine, the past gives you a good perspective on the future. This is helpful for relationships, and works with recipes and culture too. How wonderful is a simple potato gnocchi with the singular smell of smoked ricotta (from the Carnic Alps) and a garnish of poppy seeds that came through the port of Trieste? Three products, one each by way of land, mountain, and sea, all on a single, simple plate.

Meredith Erickson has co-authored The Art of Living According to Joe Beef, Le Pigeon, Olympia Provisions, Kristen Kish Cooking, and Claridge’s: The Cookbook. She is currently working on her own book, Alpine Cooking, and on The Frasca Cookbook. She has written for The New York Times, Elle, Saveur, Condé Nast Traveler, and Lucky Peach. When not traveling, she can be found in Montreal, Quebec (with friends and family at Joe Beef). 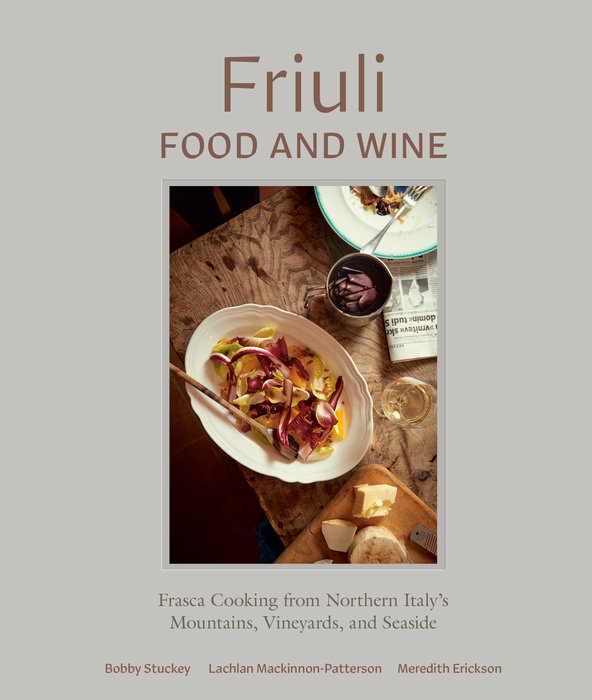