In a thrilling tale of courage and survival from Diana Gabaldon, #1 New York Times bestselling author of the acclaimed Outlander series, Lord John Grey disembarks in Havana to rescue his family—only to get swept up in a fierce rebellion. This novella, originally published in Seven Stones to Stand or Fall, is now available as a standalone ebook.

Lord John Grey is happy. His term as military governor of Jamaica is drawing to a close, and he’s looking forward to fresh beef and burgoo in North Carolina, rather than endless fish and sea-urchin innards marinated in orange juice. His preparations, alas, are interrupted by the sudden arrival of his mother’s third husband, General Stanley.

This seemed like a moderately respectable thing for an elderly lady to be doing, and Grey relaxed slightly. But only slightly.

“I trust she’s enjoying the weather.” He raised an eyebrow at his stepfather, who sighed deeply and put his hands on his knees.

“I’m sure she is. The problem, my boy, is that the British Navy is on its way to lay siege to the city of Havana, and I really think it would be a good idea if your mother wasn’t in the city when they get there.”

Lord John agrees, and with the help of his loyal valet, Tom Bird, a recovering ex-zombie named Rodrigo, and Rodrigo’s wife, Azeel (not a zombie, but resourceful and courageous [well, obviously . . . how much nerve does it take to marry a zombie?]), he sets sail at once for Havana, only to discover upon his arrival that his family isn’t all that’s in danger. Slave revolts, murder, an invasion in progress, stubborn mules, and adulterous love are the least of it. . . .

An excerpt from Besieged

“Yes, me lord. That’s what I said.” His valet, Tom Byrd, face carefully averted, put the lid back on the pot. “Was you to rub yourself with that stuff, you’d be drawing flies in their hundreds, same as if you were summat that was dead. Long dead,” he added, and muffled the pot in a napkin for additional protection.

“Well, in justice,” Grey said dubiously, “I suppose the whale is long dead.” He looked at the far wall of his office. There were a number of flies resting along the wainscoting, as usual, fat and black as currants against the white plaster. Sure enough, a couple of them had already risen into the air, circling lazily toward the pot of whale oil. “Where did you get that stuff?”

“The owner of the Moor’s Head keeps a keg of it; he burns it in his lamps—cheaper nor even tallow candles, he says, let alone proper wax ones.”

“Ah. I daresay.” Given the usual smell of the Moor’s Head on a busy night, nobody would notice the stink of whale oil above the symphony of other reeks.

“Easier to come by on Jamaica than bear grease, I reckon,” Tom remarked, picking up the pot. “D’you want me to try it with the mint, me lord? It might help,” he added, with a dubious wrinkle of the nose.

Tom had automatically picked up the oily rag that lived on the corner of Grey’s desk and, with a dexterous flick, snapped a fat fly out of the air and into oblivion.

“Dead whale garnished with mint? That should cause my blood to be especially attractive to the more discriminating biting insects in Charles Town—to say nothing of Canada.” Jamaican flies were a nuisance but seldom carnivorous, and the sea breeze and muslin window screening kept most mosquitoes at bay. The swamps of coastal America, though . . . and the deep Canadian woods, his ultimate destination . . .

“No,” Grey said reluctantly, scratching his neck at the mere thought of Canadian deer flies. “I can’t attend Mr. Mullryne’s celebration of his new plantation house basted in whale oil. Perhaps we can get bear grease in South Carolina. Meanwhile . . . sweet oil, perhaps?”

“No, me lord. Azeel says sweet oil draws spiders. They come and lick it off your skin whilst you’re asleep.”

Lord John and his valet shuddered simultaneously, recollecting last week’s experience with a banana spider—a creature with a leg span the size of a child’s hand—that had burst unexpectedly out of a ripe banana, followed by what appeared at the time to be several hundred small offspring, at a garden party given by Grey to mark his departure from the island and to welcome the Honorable Mr. Houghton Braythwaite, his successor as governor.

“I thought he’d have an apoplexy on the spot,” Grey said, lips twitching.

“Likely wishes he had.”

Grey looked at Tom, Tom at Grey, and they burst into suffocated snorts of laughter at the memory of the Honorable Mr. Braythwaite’s face on this occasion.

“Come, come,” Lord John said, getting himself under control. “This will never do. Have you—”

The rumble of a carriage coming up the gravel drive of King’s House interrupted him.

“Oh, God, is that him now?” Grey glanced guiltily round at the disarray of his office: A gaping half-packed portmanteau lolled in the corner, and the desk was strewn with scattered documents and the remnants of lunch, in no condition to be viewed by the man who would inherit it tomorrow. “Run out and distract him, will you, Tom? Take him to the receiving room and pour rum into him. I’ll come and fetch him as soon as I’ve done . . . something . . . about this.” He waved a hand at the debris, and Tom obligingly vanished.

Grey picked up the oiled rag and disposed of an unwary fly, then seized a plate scattered with bread crusts, blobs of custard, and fruit peelings and decanted this out of the window into the garden beneath. Thrusting the empty plate out of sight under the desk, he began hurriedly to gather papers into piles but was interrupted almost at once by the reappearance of Tom, looking excited.

“Who?” Grey said blankly. His mind, occupied with the details of imminent escape, refused to deal with anything that might interfere with said escape, but “Stanley” did ring a distant, small bell.

“Might be as he’s your mother’s husband, me lord?” Tom said, with a becoming diffidence.

“Oh . . . that General Stanley. Why didn’t you say so?” John hastily grabbed his coat from its hook and shrugged into it, brushing crumbs off his waistcoat as he did so. “Show him in, by all means!”

John in fact liked his mother’s third husband—she having been twice widowed when she acquired the general four years before—though any military intrusion at this point was something to be regarded warily.

Wariness was, as usual, justified. The General Stanley who eventually appeared was not the bluff, jaunty, self-confident man last seen in his mother’s company. This General Stanley was hobbling with a stick, his right foot bound up in an immense bandage, and his face gray with pain, effort . . . and profound anxiety.

“General!” John seized him by the arm before he could fall over and guided him to the nearest chair, hastily removing a pile of maps from it. “Do sit down, please—Tom, would you . . .?”

“Just here, me lord.” Tom had dug Grey’s flask out of the open traveling bag with commendable promptitude and now thrust it into General Stanley’s hand.

The general accepted this without question and drank deeply.

“Dear Lord,” he said, setting the flask on his knee and breathing heavily. “I thought I shouldn’t make it from the landing.” He took another drink, somewhat more slowly, eyes closed.

“More brandy, Tom, if you please?” Grey said, watching this. Tom gave the general an assessing look, not sure whether he might die before more brandy could be fetched, but decided to bet on the general’s survival and disappeared in search of sustenance.

“God.” The general looked a good deal short of human but distinctly better than he had. He nodded thanks to John and handed back the empty flask with a trembling hand. “The doctor says I mustn’t drink wine—apparently it’s bad for the gout—but I don’t recall his mentioning brandy.”

“Good,” John said, glancing at the bandaged foot. “Did he say anything about rum?”

“Excellent. I’m down to my last bottle of French brandy, but we’ve got quite a lot of rum.”

“Bring the cask.” The general was beginning to show a tinge of color and, at this point, began to be cognizant of his surroundings. “You were packing to leave?”

“I am packing to leave, yes,” John said, the feeling of wariness developing small, prickling feet inside his stomach. “I’m meant to sail tonight, for Charles Town.”

“Thank God. I was afraid I shouldn’t make it in time.” The general breathed audibly for a moment, then gathered himself. “It’s your mother.”

“What’s my mother?” The wariness turned instantly to a flare of alarm. “What’s happened to her?”

“Nothing, yet. Or at least I sincerely hope not.” The general patted the air in a vague gesture of reassurance that failed singularly to reassure.

“Where the devil is she? And what in God’s name is she up to now?” Grey spoke with more heat than filial respect, but panic made him edgy.

This seemed like a moderately respectable thing for an elderly lady to be doing, and Grey relaxed slightly. But only slightly.

“I hope not. She said in her last letter that there was an outbreak of some sort of ague in the city, but she herself was in good health.”

“Fine.” Tom had come back with the brandy bottle, and John poured himself a small glass. “I trust she’s enjoying the weather.” He raised an eyebrow at his stepfather, who sighed deeply and put his hands on his knees.

“I’m sure she is. The problem, my boy, is that the British Navy is on its way to lay siege to the city of Havana, and I really think it would be a good idea if your mother wasn’t in the city when they get there.” 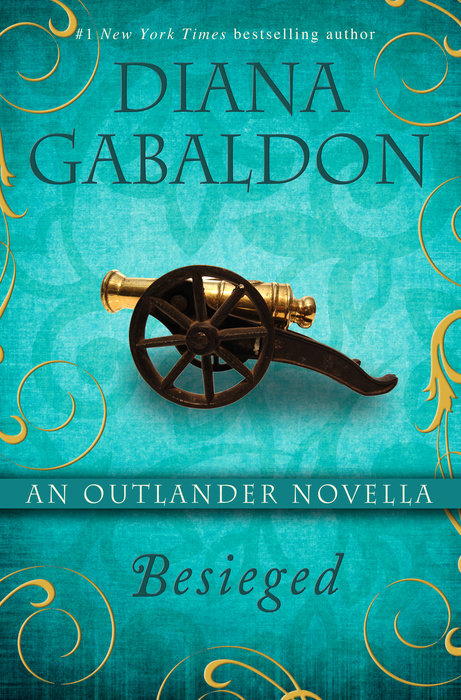