Modern Recipes Inspired by the Middle East [A Cookbook]

From the acclaimed chefs behind award-winning Los Angeles restaurant Bavel comes a gorgeous cookbook featuring personal stories and more than eighty recipes that celebrate the diversity of Middle Eastern cuisines.

NAMED ONE OF THE BEST COOKBOOKS OF THE YEAR BY TIME OUT • “Ori and Genevieve manage to pull off a style of cooking that is both familiar (and therefore comforting) but also new (and therefore fresh and exciting). This is the sort of food I could live on.”—Yotam Ottolenghi

When chef Ori Menashe and pastry chef Genevieve Gergis opened their first Los Angeles restaurant, Bestia, the city fell in love. By the time they launched their second restaurant, Bavel, the love affair had expanded to cooks and food lovers nationwide. Bavel, the cookbook, invites home cooks to explore the broad and varied cuisines of the Middle East through fragrant spice blends; sublime zhougs, tahini, labneh, and hummus; rainbows of crisp-pickled vegetables; tender, oven-baked flatbreads; fall-off-the-bone meats and tagines; buttery pastries and tarts; and so much more.

Bavel—pronounced bah-VELLE, the Hebrew name for Babel—is a metaphor for the myriad cultural, spiritual, and political differences that divide us. The food of Bavel tells the many stories of the countries defined as “the Middle East.” These recipes are influenced by the flavors and techniques from all corners of the region, and many, such as Tomato with Smoked Harissa, Turmeric Chicken with Toum, and Date-Walnut Tart, are inspired by Menashe’s Israeli upbringing and Gergis’s Egyptian roots. Bavel celebrates the freedom to cook what we love without loyalty to any specific country, and represents a world before the region was divided into separate nations. This is cooking without borders.

An excerpt from Bavel

I couldn’t help myself. We had just opened our first restaurant, Bestia, in downtown L.A.’s arts district; Genevieve was pregnant with our first daughter, Saffron; but still, the idea for a second restaurant wouldn’t leave. It began as a craving. After opening an Italian restaurant and working my way through Italian kitchens for a decade before that, I found that I craved something different when cooking for myself. I craved the flavors of home—shawarma, shakshuka, falafel, tahini. So, I began making these dishes on my days off—the foods of my father and my grandmother; the foods of my childhood in Israel, as well as my family’s roots in Georgia, Morocco, Persia, and beyond. These dishes struck a chord with Genevieve, too. Her father had emigrated from Egypt as a college student, and she felt a tug of nostalgia as she tasted the almost-forgotten spices of her youth.

Then I started scribbling down recipes. Just fragments at first—an aroma, a flavor, or a sensation I wanted to capture. During our first vacation after opening Bestia, Genevieve remembers waking up every morning to find me hunched over my notebook, writing. Eventually, what began as a collection of loose ideas developed into Bavel—a restaurant (and now a cookbook) that takes the techniques and experiences we’ve learned throughout our professional lives and applies them to the flavors of the Middle East.

Normally, Genevieve would have been the first to say no. We had a kid on the way and a busy restaurant to run. But she, too, felt that this was the right next move. Since opening Bestia, we’d been offered the opportunity to open other branches elsewhere. But Bestia is not something that can be reproduced. It is unique, and of a place, and it would have felt unnatural to try to duplicate it. The idea for Bavel was different, though; like a new sibling—connected but apart. It was a concept that spoke to our shared heritage while taking inspiration from our work, our lives, our travels, and our city. This we knew we could do.

It was 2013, and the modern obsession with Middle Eastern food had yet to really resonate in the United States. In L.A., the food of Israel, Palestine, Lebanon, and Armenia was still largely relegated to the world of fast food, banquet cooking, and the broader genre of “immigrant cuisine,” which carries with it certain false assumptions of ambition, quality, and cost. Genevieve and I wanted to do something different. We wanted to showcase how complex these flavors can be, how the deft use of spices and fire can create something ten times as powerful as any French sauce. And it was very important to Genevieve that we do this in a space that didn’t feel like some lantern-lit set from The Arabian Nights, but in a modern, airy place that matched its L.A. surroundings and channeled the sun-bleached palette of a Mediterranean beach town.

But if the opening of Bestia had been intimidating, this venture was even more so. I’d spent years honing my style of Italian cooking, but the food of my upbringing was another story. I had eaten shawarma and pita a thousand times, but I’d never made them myself. So, I had to go back—before my time as a chef, before I ever even thought about cooking professionally. I had to think back to my family’s home kitchen in Israel where I had watched my father, the greatest cook I have ever known, whip thick tahini into an ethereal spread, hang sheets of fish roe to dry in the sun for bottarga, and knead loaf after loaf of whole-grain bread. I thought back to the years of post–soccer game shawarma runs, trips to the market for Jerusalem mixed-grill sandwiches, and long café lunches, spent swiping fresh-baked pita through piles of hummus.

Genevieve, too, looked to sense memory for inspiration. She’d only ever worked as a professional pastry chef at Bestia, but growing up in Southern California, she remembered the trays of shredded phyllo soaked in floral honey syrup that would appear after large family feasts—and how even though she’d say she didn’t like it, she would sneak second and third bites when nobody was watching. She remembered how after years of complaining about the lack of chocolate chip cookies and snickerdoodles in the house, the fragrant desserts of her father’s homeland had stopped, and how as an adult, she had begged for their reappearance.

But while the flavors of our past helped inspire us, we didn’t want this to be a menu of re-creations—of traditional Middle Eastern food or my grandmother’s food or my dad’s food. We wanted it to be something unique and to prove to ourselves that we could cook our own food, completely. (The only exception is my hummus, which is directly inspired by the version served at the legendary Abu Hassan in Jaffa, the ancient port city in Tel Aviv. Because once you’ve had the best hummus in the world, you can’t think of anything else.)

With our concept in place, then came the waiting. First one space fell through, then another. It took almost three years before we were even able to begin construction, and during that time, a number of high-profile Middle Eastern restaurants began to emerge on the American food scene. A national interest in so-called “Mediterranean” flavors began to take hold, za’atar and labneh became more and more commonplace, and restaurants serving fancy falafel opened across L.A. All the while, Bavel was percolating; even as we worked on the cookbook for Bestia, we were honing Bavel’s recipes, obsessing over ingredients, perfecting the bar program, and finalizing the decor.

By the time we finally opened the doors to Bavel in a former iron-ore plant near the banks of the Los Angeles River in 2018, it didn’t feel—to us anyway—much like a new restaurant. It felt like a piece of us we’d lived with for years and, in a sense, for our entire lives. And since that moment, beneath a chandelier of vines, I, Genevieve, and our incredible team of cooks, waiters, hostesses, bartenders, and staff have worked continuously to bring our original dream to life—a restaurant and a menu that feels at once new and familiar, with flavorful echoes of the Middle East and a spirit that is wholeheartedly L.A.

ORI MENASHE is co-owner and executive chef of Bestia.

GENEVIEVE GERGIS is the co-owner and pastry chef of Bestia.

LESLEY SUTER is the former deputy editor for Los Angeles magazine and a two-time James Beard award-winner for food writing.

Modern Recipes Inspired by the Middle East [A Cookbook] 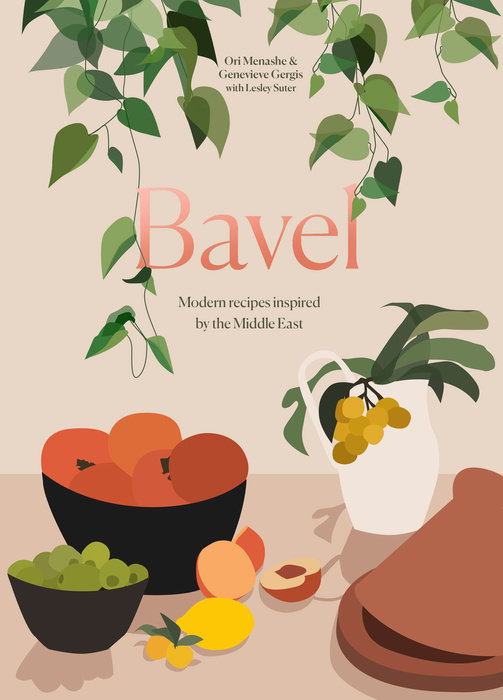